Practicing What They Preach

Employees engage in unexpected ‘stress wellness breaks’ in which they are told to stretch, take a short walk, do push-ups, or engage in other physical activities for a few minutes.

It was her 55th birthday, and she took third place in her age group. “I call it my marathon, and I have the medal I won hanging on a doorknob at home,” said the executive assistant at Dowd Insurance Agency in Holyoke.

Drudi is proud of her accomplishment, and knows that running a 5K is something she probably would never have attempted on her own. But thanks to the Dowd Wellness Program, which kicked off at the beginning of the year for employees in the company’s main branch and all its satellite offices, she was motivated to take up the sport.

The program was created to inspire people to eat a healthy and well-balanced diet, exercise on a regular basis, and engage in stress-reducing activities. It has had a marked effect on participants, and led employee Cathy Sypek to start a ‘Couch to 5K’ running group to share her love of the sport, which Drudi and other non-runners joined, meeting after work to train at the nearby Ashley Reservoir.

“I had tried running in the past, but had never been successful. So I thought that, whether I completed it or not, it would still be a challenge,” Drudi said. “We started in April, and within a few weeks, I felt it was something I could achieve. There was a lot of camaraderie, and whenever someone lagged behind, the rest of the group encouraged them to keep going. And since Dowd’s program began, other people have tried things like yoga or lifting weights. It’s motivating when we get together and hear about the success of other people.”

Catherine Palazzo, the company’s Human Resources director, conceptualized the idea for the Dowd Wellness Program after listening to representatives from other companies talk about wellness initiatives during a group meeting.

“When I returned, I did some research on wellness programs and found they were good for overall morale, health, and team building,” she said, adding that she presented the concept to President and CEO John Dowd Jr., who approved it wholeheartedly.

Which means that the company now follows the advice it gives others.

“We tell our commercial clients to try to implement an atmosphere in their workplace that inspires employees to be safe and stay healthy; it results in greater productivity and fewer sick days, and is also beneficial as it shows employees the company cares about their people,” said Dowd. “So I thought that, if we are going to preach it, we needed to practice it.”

Palazzo began designing the program with help from fellow employee Lynn Ann Houle, and asked people to volunteer for a wellness committee.

“The intent of the program is to support the overall health improvement and morale of our employee population,” Palazzo said, explaining that programs and activities have been designed to raise awareness about health and nutrition and increase overall physical activity levels, with recognition and incentives awarded on a regular basis.

For this issue, BusinessWest talked with employees at Dowd about how they created this program, and why they believe it is a blueprint for other companies to follow.

The wellness program, which kicked off in February, features a number of components, including a weekly online questionnaire. Employees who reply earn points for positive responses to a series of health-related questions. They are asked about their food choices, whether they consumed eight glasses of water each day, and if they have engaged in the listed exercises, which range from doing an hour of cardiovascular activity during the week to lifting weights, running, or doing yoga.

Every few months, the activities on the list are changed  — with advance notice — to inspire people to try new sports such as kayaking or hiking.

Points are tabulated, and prizes are awarded at a monthly luncheon, where people’s birthdays, anniversaries with the company, and other milestones, such as exceeding sales goals, are also recognized.

At that time, the grand-prize winner receives a gift certificate to a sporting-goods store, and second- and third-place winners choose from an array of exercise-related items, such as yoga mats, cookbooks, and videos.

In addition, food in the company snack bar has been changed; unhealthy items have been replaced with fresh fruit and other nutritious offerings. Free fruit is also put out once a week at lunchtime, and Houle announces unexpected ‘stress wellness breaks,’ in which employees are told to stretch, take a short walk, or do other physical exercises.

There are also periodic activities that allow participants to earn bonus points. In July, Houle planned a golf outing, and employees from different offices played 18 holes of pitch and putt at Annie’s Driving Range in Chicopee. She brought a fruit salad in a watermelon, as well as healthy beverages. “We all had a blast,” she said.

The following month, her goal was to “bring out the inner child” in each member of the staff, which led to the creation of Dowd Field Day.

More than a dozen people gathered outside the Holyoke office and played ladder ball and hopscotch, took part in a hula-hoop contest and a sidewalk-chalk art competition, then enjoyed healthy snacks prepared by committee members who used Weight Watchers recipes.

Houle said the event was truly enjoyable. “There is nothing better than laughter and a smiling face. It makes you feel good about yourself and is projected in your outward demeanor.”

This is what organizers had in mind when the program was launched at the annual company meeting. On that occasion, Dowd talked to the employees about why it was being implemented.

“I told them the firm is concerned about each person’s well-being, and we wanted them to take steps to improve their health,” he recalled. “We challenged them to begin an exercise regimen and to eat healthy foods, and told them, if the opportunity came up to participate in a walk for charity or something similar, to do it. Good health is achievable with exercise and proper diet and results in positive benefits.”

Each employee received a kick-off goody bag, with information on how to log their food intake and activity on myfitnesspal.com, as well as a stress ball, a healthy snack, bottled water, and other health and fitness items. In addition, everyone has been encouraged to complete Health New England’s annual online health survey.

Palazzo said participation has steadily increased since the program began, and enthusiasm continues to grow. To that end, the agency subsidizes gym memberships, and committee members share articles, healthy recipes, and information on physical activity and exercises that people can do at home.

Houle is chair of the program and plays an active role in keeping people motivated. She told BusinessWest that she speaks to employees about how they are doing and sends periodic upbeat e-mails to keep everyone encouraged.

Houle lost 40 pounds on Weight Watchers two years ago, and said it enhanced her self-esteem. “It made me passionate about feeling good and being happy,” she said, adding that, as a result, she loves playing a leading role in the program because she wants others to feel equally good. “The people who choose to participate in this really enjoy it.”

Carol Andruss has lost eight pounds since the Dowd Wellness Program began by making small lifestyle changes, and said participating employees have lost more than 100 pounds overall, an estimate garnered through conversations in the office and at the monthly meeting and extracurricular events.

“I’m trying to watch what I eat and have been walking a few times a week, which is more than what I was doing before this started,” she said.

But it hasn’t been difficult, because she joined the committee and is responsible for stocking the office snack bar.

“I buy things like trail mix, low-fat pretzels, and popcorn,” she said. “And I pick up fresh fruit or fresh vegetables and hummus once a month for everyone to enjoy in the afternoon. I volunteered to do this because I wanted to raise awareness about healthy eating and become more involved at the office.”

Sypek, meanwhile, is a dedicated runner, and was so inspired by the program, and the fact that many employees began walking together as a group at lunchtime, that she decided to start the ‘Couch to 5K’ running program.

“I announced it in all of our offices,” she said, adding that the program has a set agenda — with intervals of walking, followed by running, then walking again — until the person can run three miles non-stop, which equates roughly to five kilometers.

Much to her delight, five non-runners decided to join. “We met five days a week for 30 to 45 minutes after work,” she said, explaining that each runner chose a 5K run they wanted to complete, and everyone has met their goal. “I love running, and this has given me a true sense of satisfaction. Many people think they can’t run, but they can, if they go at their own pace.”

Employees who have chosen to take part in the Dowd Wellness program say it has been extremely beneficial and has resulted in positive life changes.

For example, Debbie MacNeal joined Sypek’s running group, which was a new activity for her. “I completed the Taste of the Valley 5K Run in West Springfield,” she told BusinessWest. “I’m pretty active and go to the gym a lot, but the 5K is something I would never have done on my own. It felt great to finish, and I am still running.”

Andruss is more conscientious about her food choices, and says walking with a group of people at lunchtime is motivating. “It has been proven that people are more inclined to exercise if they have someone to do it with.”

The weekly online survey has made Sypek more conscientious about the amount of water she drinks and whether she is consuming her fair share of vegetables.

“This program is great. Everyone needs to be reminded from time to time about things they can do to improve their health,” she said.

Dowd is satisfied with the results and plans to keep the program going. “A lot of people are participating, which is exactly what we hoped for. There is strength in numbers; it’s very positive, and the enthusiasm it has generated has been contagious. Plus, it’s important to practice what we preach,” he reiterated.

Palazzo is also pleased. “I’m happy there has been so much interest in our wellness program. It has really taken off and is good for employee morale and team building,” she said.

Houle agreed. “It has great benefits and shows that management cares about our overall well-being. They are willing to assist us by thinking outside of the box.” 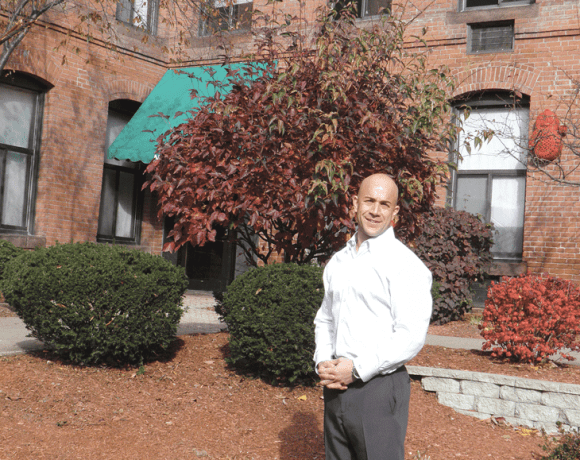