Qteros, the ‘Microsoft of Energy,’ Lands in Chicopee

Attendees at the groundbreaking ceremonies for Qteros’s plant in Chicopee hailed it as much more than a match of a tenant with available space.

Several months ago, amid reports that Qteros  a company working to use something called the Q microbe to revolutionize ethanol production  would be leaving the Pioneer Valley to continue its progression in Worcester, its CEO, Bill Frey, announced a commitment to maintain a strong presence in the 413 area code.

It has taken some time, and some maneuvering, but hes now making good on that pledge.

On Oct. 9, Frey and a host of other dignitaries officially broke ground, if you will, on a $3.2 million pilot plant that will be located in a 16,000-square-foot building off Padgett Road in Chicopee that was built on spec by Agawam-based Development Associates.

Qteros, which Frey boldly describes as the Microsoft of energy, will soon commence work to scale up its production of ethanol from common biomass, rather than corn. We believe that this technology is transforming the way we produce fuel, said Frey, and the work we are doing at this pilot plant is a critical step in scaling up our process.

The location of the plant in Chicopee was hailed by attendees as not simply matching a company with available square footage, but as part of a commitment on the part of Qteros to have a presence in the region, and for Chicopee officials to continue to bring new jobs  and new technology  to their city.

And for that, Mayor Michael Bissonnette praised all those on hand for the ceremony and, a few days later, someone who wasnt  Robert Redford.

Bissonnette told BusinessWest that, in 2007, he was one of 41 mayors from across the nation invited to the Sundance Summit, an annual mayors gathering on climate protection, sponsored by Redford, the National Resources Defense Council, and the Clinton Foundation.

While he is unsure of exactly why he was specifically chosen as one of the guests that year, Bissonnette speculates that his commitment to energy conservation within his city brought him to the attention of the actor who played the Sundance Kid.

We had done some piloting with energy efficiency in Chicopee, he explained, and within the school systems, weve saved $2 million in three years by going green. Were saving $40,000 a year with efficient fixtures in municipal buildings.

At the summit, Bissonnette said, he learned a lot about alternative energy and technologies, and upon returning to the corner office, the wheels were set in motion for those ideas to come to his city, which he calls the crossroads of New England.

When I came back, my attention was drawn to an article in Boston magazine about what was then called Sun Ethanol and Dr. Susan Leschines work at UMass, he said, referring to Qteros. I was fascinated with the process, and I was very intrigued to read that they were looking to establish a pilot plant in Western Mass. So Chris Nolan, my chief of staff, made contact with them to let them know that Chicopee was very interested in this.

But the path from that article to the groundbreaking was circuitous. As reported in these pages earlier this year, Qteros had plans to lease space within the massive Solutia complex in Indian Orchard. Due to decisions in out-of-state corporate management for the latter company, the deal fell through. What was a loss for that site became good news for the courtiers in Chicopee.

Bissonnette gives a great deal of credit to a development team in city hall for the permitting process for Qteros. From beginning to end, the permits were secured in two weeks. The team is comprised of department heads from infrastructure and zoning to Chicopee Electric Light and municipal utilities. The mayor expressed how committed the city is to fostering new business growth.

Say you came to me tomorrow, Bissonnette said, and told me, mayor, I want to do this in your city. Well, its not just what I think. Our team knows all that needs to be done, to expedite the process. Lets sit down, well tell you what might need to be tweaked to make it fit, well tell you what problems might be foreseen, and well go ahead and get those permits to you.

What led to Qteros coming to Chicopee was a series of right moves, said the mayor. Ken Vincunas, president of Development Associates, had incredible foresight to build at the location, he explained, so the structure was there. And the expedited permits allowed Qteros to secure Department of Energy grants for the project.

The most important factors, he continued, were that we were familiar with the scientific research, and we were prepared to move very quickly when we learned that they wanted to seek an alternative site from Solutia.

Leschines research forms the backbone of Qteros. While the nuts and bolts of the business venture are handled by her associates and partners within the company, she said that driving to the Westover site for the first time, she realized what an ideal location had been found.

Leschine gives credit to Frey, working with the other founders of the company, to achieve a continued presence in this area. She also has high praise for the two Congressmen for the area, calling Richard Neal and John Olver diehard supporters. Echoing her colleagues praise for their host city, Leschine found Chicopee to be a happy end to the search process.

Chicopee is just such a great place for it, she told BusinessWest. Its already zoned for commercial development, and its close to major highways; all the obvious things are there. Also, it was very encouraging to hear from the local people and officials in Chicopee  there was no hesitation, and we were welcomed. The more we go forward, it just becomes more and more clear that its the perfect location.

This pilot plant represents an important step for the company to move from the lab to the market, she said. When the pilot plant is completed in the next several months, the facility will be figuring out such complex functions as transport of the feedstock, the raw materials necessary for the process, to the plant.

Qteros also recently announced a collaboration with Israel-based Applied Clean Tech to utilize its technology dealing with wastewater sludge as a feedstock for the Qteros process. In an interview with an ethanol trade journal, Frey said, there was not a technology that anyone had available to actually convert that material into ethanol. What weve done is develop our process so that it can use this particular source of cellulosic material.

But while the breaking of ground (in a figurative sense) was considered significant for Qteros, it was also described as another big step forward for Chicopee, a former mill city trying to replace jobs lost decades ago, and, in some ways, reinvent itself.

At the ceremonies, Robert Culver, president and CEO of MassDevelopment, talked about the historic importance of an emerging technology in the 21st century taking place in the city where another generations technology took hold. He should know; MassDevelopment signed an agreement earlier this year to manage demolition and development of the old Uniroyal complex off Grove Street, which has been an eyesore for decades.

Bissonnette sees the Qteros pilot plant as a springboard with implications for both his city and beyond. Addressing the age-old topic of jobs and livelihoods for young people in Western Mass, he said, in my city it used to be tire makers and textile workers that built families and futures along the banks of the Chicopee River. But its a new technology, and a new generation. It is absolutely imperative that we keep looking for these opportunities.

And he said more of them could come via the state university and the research being conducted in Amherst.

Theres a lot of talent at UMass, he said. People are doing a variety of things in the lab, and wed love to partner with them in creating a campus, as it were, not unlike what Microsoft has done in Redmond, Wash.

Keeping it here in Western Mass is key, he continued. If this is going to continue to be the Knowledge Corridor, you cant just have academics in an ivory vacuum. Theres got to be real-world meaning. And thats what these spinoffs are beginning to accomplish, and we are beyond excited to be included.

Chicopee might well find itself on the cusp of a role in biofuels and the so-called innovation economy. Bissonnette said hed like to see the future 115-acre Westover West business park turn into a green-technology center. He mentioned that he has been talking to the scientists at UMass behind grassoline, another venture currently in the process of commercializing of an alternative fuel, and what he called a hydro plant scheduled to come online for the city in 2011. He said that his hopes are for the eventual larger Qteros plant to be located in his city as well, adding, thats when youre going to see hundreds of jobs created.

Wind, solar, alternative fuel  were open to all the green technologies that are out there to succeed in the new economy, he continued, noting that the city has seen progress across the board. Weve had $80 million in new business growth in the last two years in Chicopee, in probably the worst economy in my lifetime, Bissonnette said. And its because we know how to be business-friendly. 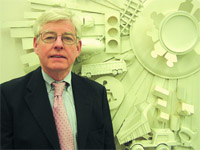