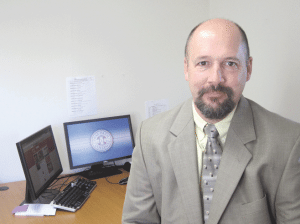 Larry Snyder says positioning Bay Path College as a hub of cybersecurity expertise is an ambitious, but attainable, goal.

Larry Snyder says his broad goal is to help position Bay Path College as a “hub of cybersecurity in Western Mass.”
That’s a somewhat ambitious but certainly attainable goal, he said, noting that there are many aspects to the process of getting there, starting with the school’s decision to create what is believed to be the first master’s degree program in cybersecurity management in New England, which will be led by Snyder and launched later this month. There is also the Cybersecurity Management Summit, which the college will host on Oct. 11, featuring Robert Milton, retired commander of the Metropolitan Police Service, or New Scotland Yard (more on that later).
And in the fall of 2014, the school will launch an undergraduate program in cybersecurity, said Snyder, who has held titles ranging from director of the CyberSecurity Research Center at Herkimer Community College in New York to manager of fraud operations at First USA Bank in Wilmington, Del.
If all goes as planned, he told BusinessWest, Bay Path could soon join schools such as UMass, Utica, the University of Maryland, Stonybrook, and Champlain College as recognized leaders in academic programs and research in the emerging field of cybersecurity.
More importantly, though, it will be training individuals for a growing number of jobs in this emerging field, and thus helping to meet one of the recognized challenges moving forward — making sure there is an adequate supply of talent to enable the business community and society in general to cope with a security problem that grows larger and more ominous each year.
And the new master’s program will address one of the more pressing and immediate needs, said Snyder, citing a documented lack of management-level individuals to lead programs and individuals in the fight against cyberthreats.
“This program grew out of the sense that there was an opportunity — something was missing,” he explained. “Cybersecurity had been around for a while — there are lots of technical cybersecurity programs in academia — but what was missing, at the master’s level, was this cybersecurity management focus.”
Bay Path’s new 36-credit, online program will address this void, he said, by training people for some of those positions he’s held — in both academia and business — and a host of others.
And there will be great demand for such individuals, he said, enough to give graduates choices and some clout.
“The really great part about this — and what I tell students when I meet with them — is that they can really write their own career path,” he noted. “Typically, you’d expect them to fall into that chief information security officer level, but you’ll also see them as compliance officer, senior auditor in an accounting firm, and many others. It’s so wide open right now, and it really depends on the industry you’re interested in.
“This is a great time to get into the field,” he went on. “It’s been a great time for about 10 to 15 years, and it’s going to be a great time for another 20 years, I expect. These graduates are going to be able to take this field in a whole new direction.”
For this issue and its focus on education, BusinessWest takes an in-depth look at Bay Path’s new master’s program and its broader efforts to take a leadership position in a field where the prospects are bright and the job opportunities are expected to be plentiful.

Technically Speaking
“Digital Forensics.” “Financing, Cost Control, and Project Management of Cybersecurity Organizations.” “Information Assurance Manage-ment and Analytics.”
These are just a few of the 12 courses currently planned for the Master of Science in Cybersecurity Management program, said Snyder, noting that about 10 students have signed up for the program, and he expects probably double that number by the time it is launched at the end of this month.
And these individuals come from a number of industry sectors, he said, listing everything from accounting to gaming; from banking to law enforcement. This diversity provides more evidence of both the scope of the issue of cybersecurity moving forward and its promise when it comes to jobs in this field.
“President Obama calls it one of the most serious economic and national-security issues we face as a nation,” said Snyder, noting also that some of the nation’s leading industries are vulnerable to the ever-expanding threat of online attacks, cybercrime, and digital espionage. “Our financial systems, power grids, telecommunications, water supplies, flight operations, and military communications are all online, making them vulnerable to this growing, global form of cyberwar.”
Snyder has been on the front lines of this war, as someone both fighting the threats directly and teaching those who will join the swelling ranks of those hired to keep their employers’ interests safe.
A former military police officer in the U.S. Army, he would later serve as loss prevention/operations manager for Jamesway/Ames in New Jersey, manager of Fraud Operations for First USA Bank, and senior information systems auditor for NBT Bank in Canajoharie, N.Y., before shifting into academia.
He’s served as an adjunct professor focusing on crime investigation and cybersecurity at Utica, but his more recent, and far-reaching, work came at Herkimer County Community College, where he received accreditation for a cybersecurity program from the Committee on National Security Systems (CNSS), developed a curriculum, and handled ongoing assessment of the program and individual courses to meet standards set by the industry, the State University of New York, and the Middle States Commission on Higher Education.
At Bay Path, his first assignment is the get the new master’s degree program off the ground and win accreditation for it. He described it as a much-needed vehicle for training individuals for mid-level management positions in a host of sectors that will “bridge the gap between upper management and technologists that will be working for them.”
But his broader mission is to make the school that “cybersecurity hub” he described.
And the upcoming Cybersecurity Management Summit is one of many initiatives being undertaken with that goal in mind.
Subtitled “The Human Side of Cybersecurity Management,” the event will feature thoughts from Milton about the global challenges associated with this emerging specialty, and provide first-hand examples of what he has learned about human nature and its relationship to cybercrimes and cyberterrorism in particular.
The summit will also include a panel featuring, among others, Snyder and Marisa Viveros, vice president of IBM Corp. and leader of something called the Cyber Security Innovation Initiative. She will discuss efforts to create a pipeline of talent in cybersecurity and encourage collaboration between industry, government, and academic institutions.
Meanwhile, the undergraduate program in cybersecurity, currently on the drawing board and slated to begin a year from now, will represent another step forward in the process of gaining regional and national prominence in this field of study.
That program will have two focal points, or majors, he explained. One will be in ‘cybersecurity and information assurance,’ which will involve computer programming, and the other will be in ‘digital forensics,’ an emerging field that holds significant promise for Bay Path because there are currently very few degree programs in this realm.
“Digital forensics involves treating the computer, cell phone, or other electronic device as a crime scene,” he explained, noting that there will be demand for people trained to do this work. “Students will learn how to conduct a search for evidence on that particular device, and process it in the same way they would if they were at a more traditional crime scene collecting fingerprints or blood.”

Keys to Success
Summing up his outlook — and his assignment moving forward — Synder said that, in time, and perhaps not much of it, Bay Path could become a center of academic excellence in cybersecurity.
“We want to make an impact in this area,” he told BusinessWest. “This is a new endeavor for Bay Path, and something not typically connected to the school — this is not a technical school. But the management focus really hits home; we have a good business program here, and a good criminal-justice program. This is going to be a real growth program for Bay Path.”
That’s because ever-improving technology has fostered new types of crime and breeds of criminals — and a steadily growing need for people to fight it. 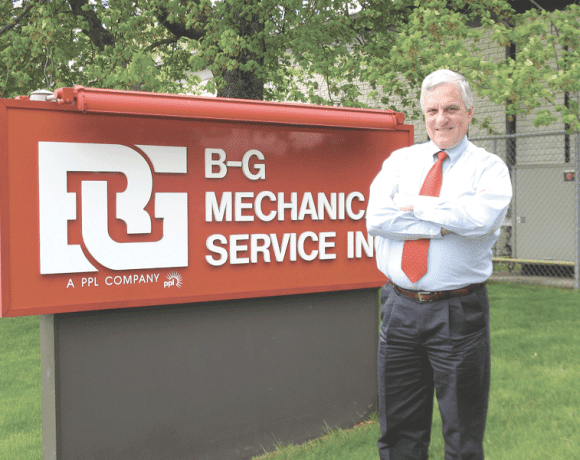