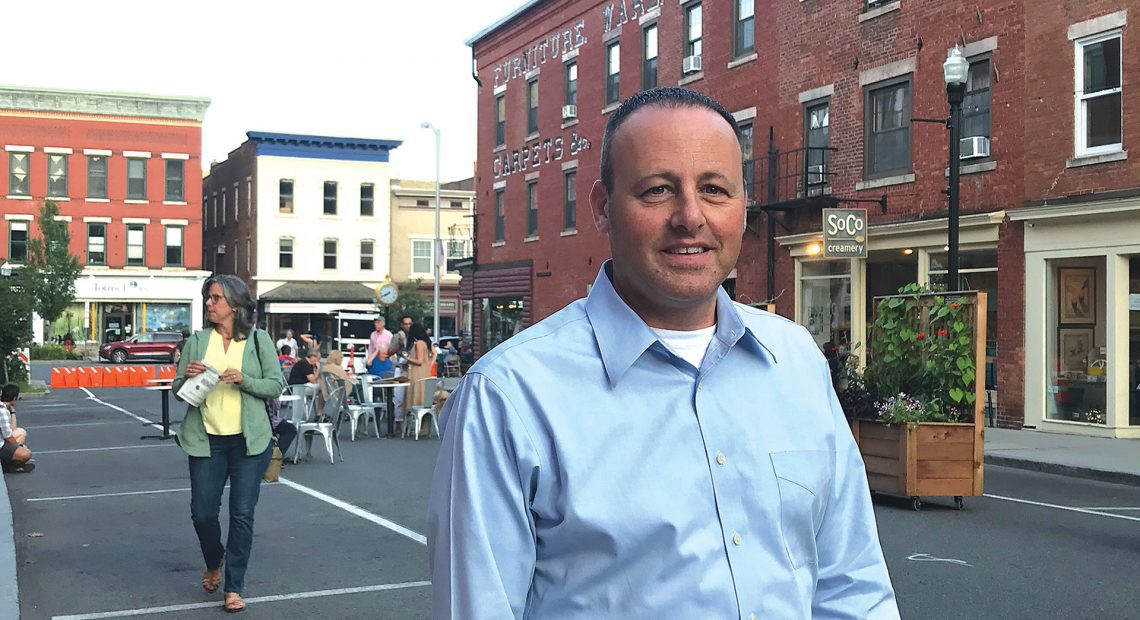 Great Barrington Reinvents Itself for Success 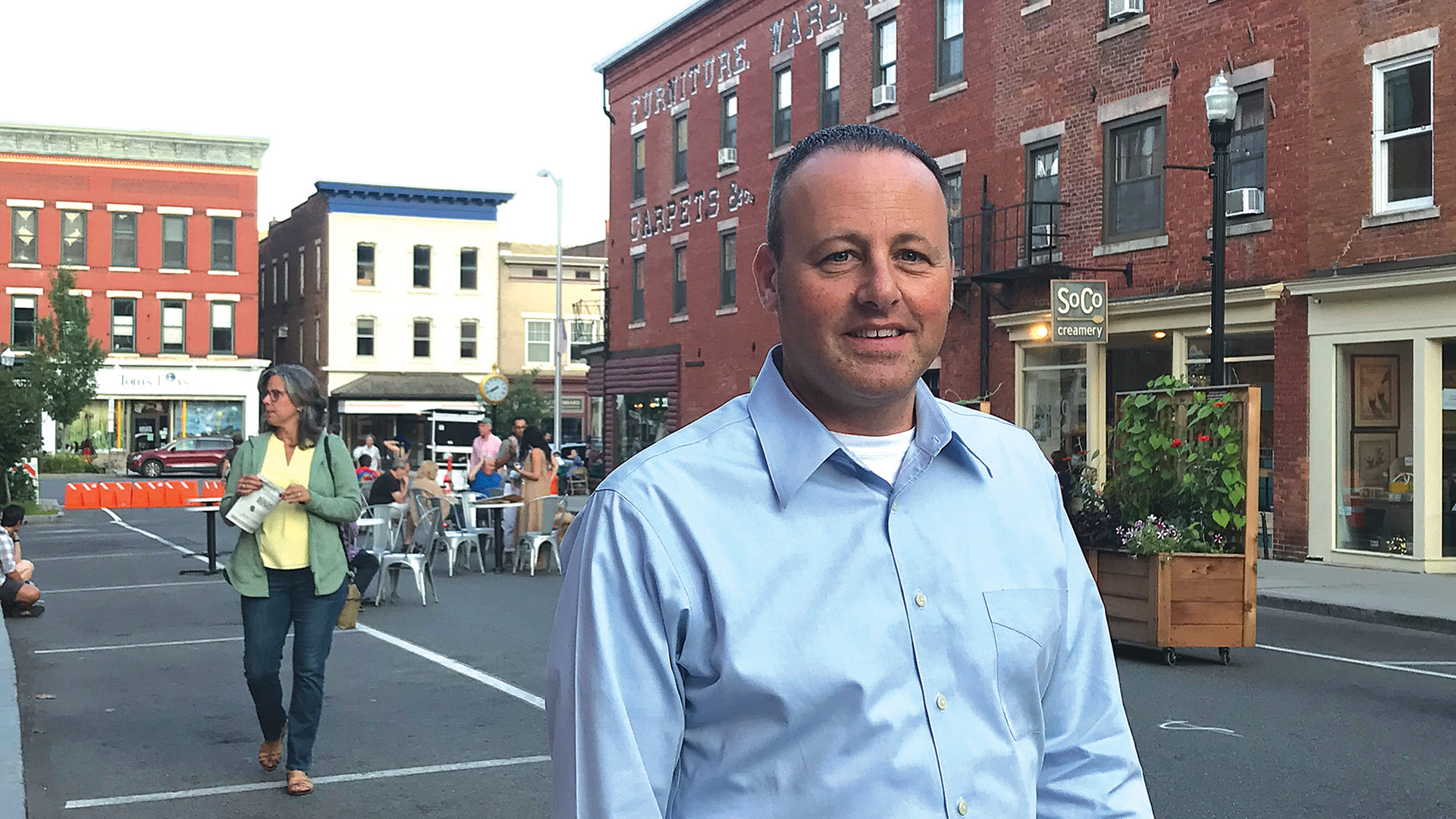 Mark Pruhenski says Great Barrington has seen an influx of new residents during the pandemic.

On a summer Friday night in Great Barrington, Mark Pruhenski simply enjoyed the sight of dozens of diners eating outside and the sound of musicians playing from various spots around downtown.

Town manager since 2019, Pruhenski said Great Barrington is fortunate to have weathered the pandemic well. He gave much of the credit to a task force formed early on that included town staff and a strong network of partners, including Fairview Hospital, local food banks, and others who lent support.

With its location in the Berkshires, Great Barrington has long been a popular spot for second homes. During the pandemic, many people relocated to their second homes to get away from populated metro areas and work remotely. As time went on, many decided to make Great Barrington their permanent home.

“Along with those who moved into their second homes, we had hundreds of new residents move to the area,” Pruhenski said. “Folks who enjoyed visiting the Berkshires for culture and entertainment were now permanently moving here.”

Betsy Andrus, executive director of the Southern Berkshire Chamber of Commerce, noted that, even at the height of the pandemic, when restaurants and cultural venues were closed, people were still looking for a place to rent or buy. She believes the consistently low COVID-19 infection rates were a strong part of the town’s appeal.

“Along with those who moved into their second homes, we had hundreds of new residents move to the area. Folks who enjoyed visiting the Berkshires for culture and entertainment were now permanently moving here.”

“People from larger metro areas came to Great Barrington in droves,” Andrus said. “You could not keep a house on the market, with some sales happening in only a few hours. Others took a virtual tour and bought sight unseen.”

While admitting it’s difficult to find positives from a worldwide pandemic, Andrus said one benefit was forcing businesses in town to change the way they had been operating.

“I think we were kind of stagnant before,” she said. “Then, suddenly, our businesses had to put a lot of energy into how they could reinvent themselves.”

In addition to sit-down restaurants figuring out how to become takeout places, Andrus pointed to Robin’s Candy Shop, which could no longer allow customers to serve themselves in the shop.

“They moved the store around overnight, so now the staff gets you everything you want,” she said. “Then Robin’s quickly switched over to online sales, which is no small feat, either.” 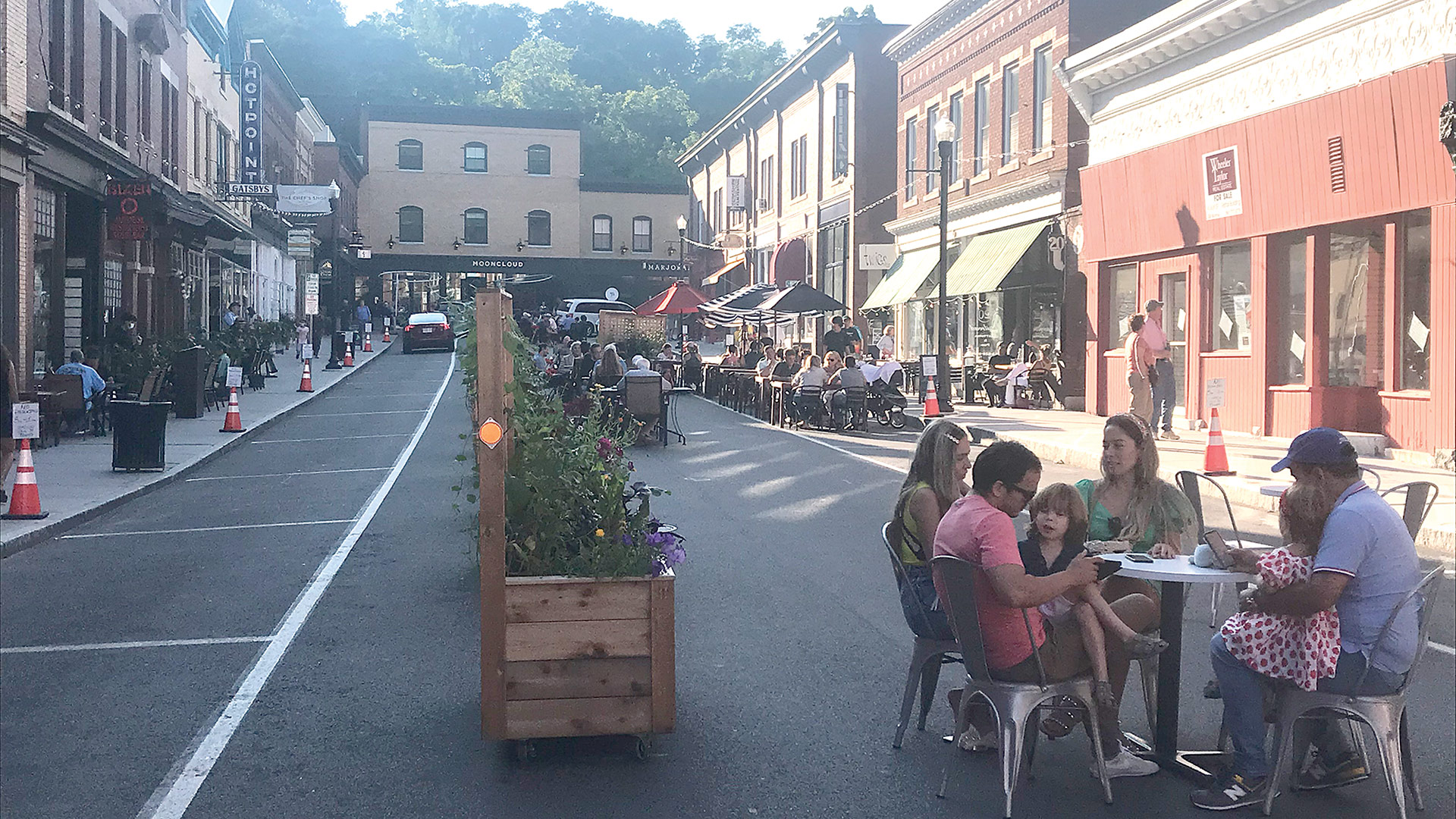 While Great Barrington saw some stores permanently shutter their businesses during the pandemic, Andrus said COVID was not usually the main reason for closing. In some cases, the businesses that did not survive the pandemic were struggling before COVID hit. For others, the pandemic provided the opportunity for owners to change professions or retire.

“We had a huge movement of stores that was similar to musical chairs,” she said. “When a business would close and make their space available, multiple people were trying to sign up for it.”

Like musical chairs, there are no empty spaces now in downtown Great Barrington. As a lifelong resident, Andrus said she’s never seen so much activity.

“In some ways, this big shift is the best thing that could have happened,” she noted. “The stores have all settled in to the right locations for what they are selling, and it has really changed the atmosphere in town.”

“We’ve always anticipated that Great Barrington would see a population decline over the next decade and beyond,” he said. “It would be great to see the influx of new residents flatten or even reverse that decline.”

While many town halls closed during the pandemic and conducted business remotely, Pruhenski said Great Barrington Town Hall closed only twice, for a month each time. Otherwise, he and his staff came in every day to keep several town projects moving forward.

In 2019, the state Department of Transportation had closed the Division Street bridge. Right now, the project is in the permitting and design phase for a new bridge, which is scheduled to open next summer.

“Everyone was forced to jump out of their comfort zone, and I believe that made us all better for it.”

“Division Street is an important bridge because it links the east side of town to the west,” Pruhenski said. “It’s a shortcut everyone in town likes to use.”

In the northern part of Great Barrington, a private water company serves the village of Housatonic that has been struggling with insufficient water pressure. While Great Barrington doesn’t regulate or own the system, the town is involved to make sure residents there receive clean water and to make sure there is plenty of pressure for firefighters when they need it. Pruhenski said he and the Select Board are looking at several options, including a merger with the town’s water system.

“We were working on this during the pandemic because it has an impact on so many residents,” he noted.

After a transportation service for seniors abruptly closed, town officials took the lead to quickly revive the regional van service that now provides transportation to elderly and disabled residents in Great Barrington and five neighboring towns.

Meanwhile, in the spring of 2020, the town launched a project to paint the downtown crosswalks as a way to recognize diversity in town. Pruhenski said the reaction by residents was more encouraging than he could have expected.

“We just did our little project, and the timing happened to be perfect that the rainbow was being used as a symbol of hope at the height of the pandemic,” he recalled. “After we painted our first crosswalks, people were encouraged to come outside to see them and take pictures with them. It’s been a fun project that’s made everyone happy.”

For 2021, the town added more rainbow crosswalks, and now the entire downtown corridor has replaced its white crosswalks with rainbows.

“People from other communities are calling us because they want rainbow crosswalks in their town,” Pruhenski said. “They are asking us how we did it and where we bought the paint. This project has been so rewarding during such a challenging time.”

For several years, Great Barrington has been pursuing projects to encourage environmental sustainability. One big step was to ban plastic water bottles in town. In return, the town has built three public water stations to make up for the bottle ban.

Another sustainability effort involves the Housatonic Community Center, a popular gym built shortly after World War II. Pruhenski said the center is used a great deal in the winter, so the town has bulked up on insulation and added LED lighting. He hopes to see big savings in energy use and operating costs for the facility.

Great Barrington also has the distinction of hosting the first retail cannabis store in Berkshire County. Theory Wellness opened January 2019 and is now one of four cannabis establishments in town. Pruhenski said sales at all four stores have been strong, and they have returned some welcome revenue to the town.

“For fiscal year 2022, we were able to use $3.5 million in cannabis revenue to offset taxes,” he noted. “Capital budget items, like new police cruisers that we normally have to borrow for, were paid for in cash thanks to the cannabis revenues.”

The town also collects 3% from cannabis stores to mitigate the negative effects of cannabis on the community. After awarding $185,000 in fiscal 2021, Pruhenski said the town will be awarding $350,000 in fiscal 2022 to five social agencies in the form of community-impact grants.

Andrus agreed that cannabis has had an overall positive impact on Great Barrington.

“Despite all the traffic cannabis brings to town, I’m surprised at how unintrusive it has been,” she said. “For people with health issues, cannabis allows them to live with much less pain.”

When Massachusetts launched the Shared Streets and Spaces Grant Program in June 2020, it was immediately popular across the state. Pruhenski called the program a “silver lining” resulting from the dark cloud of COVID. Great Barrington used its Shared Streets grant to develop an outdoor dining area on Railroad Street to support several restaurants located there. Every Friday and Saturday night in the summer, two-thirds of the street is dedicated to outdoor dining. Pruhenski enjoys seeing Railroad Street turn into a café each weekend.

“When we started this in 2020, vaccines were not yet available, and the only way to dine out was to eat outside,” he said. “Restaurants nearby also use their outdoor space, so it creates a lively downtown experience.”

Andrus said outdoor dining on Railroad Street was a huge effort that was well worth it. “It works great, and people love it. The restaurants want to see this keep going, so they are all taking part.” The town also participates in an effort called Berkshire Busk, in which a dozen entertainers perform at different spots around downtown Great Barrington during the outdoor dining season.

Andrus said the town’s response the to pandemic reminds her of the expression, “don’t waste a good crisis.”

“Everyone was forced to jump out of their comfort zone, and I believe that made us all better for it,” she added. “Because we were all kind of stagnant before the pandemic, it made us try something different.”

Pruhenski would be the first to say that Great Barrington is moving in a positive direction as more people move in, and many are locating their businesses here, too.

“School enrollments are increasing, and Main Street is busier than it’s ever been,” he said. “It’s a really exciting time for the town.”