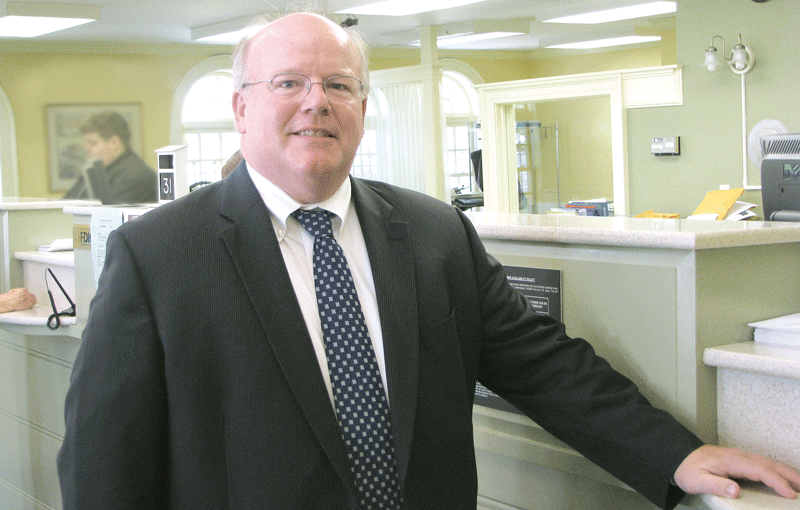 For the CEO of Greenfield Cooperative Bank, the recent merger with Northampton Cooperative Bank — joining two institutions with a combined 236 years of history — made sense on a number of levels, from their similar cultures to the prospect of greater lending clout, to different but compatible branch footprints that eliminated the need for layoffs. The goal, he said, was to make the merger as seamless for customers as possible, while putting a broader range of services within their reach.

For 36 years in the banking industry, Michael Tucker has weathered plenty of changes, so the recent merger of Greenfield Cooperative Bank — where he has served as president and CEO since 2002 — and Northampton Cooperative Bank was far from a first.

“I’ve been through four of these, and I’ve been on both sides,” he said, referring to being the larger or smaller bank in mergers and acquisitions. “My first one was 30 years ago, when the old Nonotuck Savings Bank merged with SIS. They made sure Nonotuck looked like SIS on day one, and they lost half their customers within a year.”

It’s a lesson he hasn’t forgotten, which is why customers at the two recently merged co-op banks — announced 15 months ago and made official on April 1 — were met with a much more seamless transition. “Here, our goal was to make it transparent for customers. We aren’t closing offices or laying anyone off.”

The overall entity — which now boasts about $525 million in deposits, more than $60 million in capital, 10 branches, and 98 employees — is officially called Greenfield Cooperative Bank, taking the name of the larger institution.

But, while the six Franklin County branches that have been operating under the Greenfield name — two in Greenfield and one each in Northfield, Sunderland, Shelburne Falls, and Turners Falls — will continue to do so, the four Hampshire County branches, two each in Northampton and Amherst, will continue to operate under the Northampton Cooperative Bank name their customers are used to, as a division of Greenfield Co-op.

“We committed to using the Northampton Co-op name in Hampshire County, for existing branches and any that might open in the future,” Tucker said, noting that no physical expansion plans are on the drawing board yet, as bank leaders want to first make sure the current branches are running smoothly.

“Why give up all that history, all that goodwill, for either brand?” he continued, noting that Greenfield Co-op dates back to 1905, and Northampton Co-op to 1889. “Early on, people said, ‘let’s come up with a new name for the combined bank.’ I’ve seen that done elsewhere, and people just ask, ‘now, what bank was that?’”

“A $100 million bank would have trouble surviving today, because of the expenses,” Tucker said, referring specifically to increased regulatory and compliance costs for banks in today’s environment. “My commitment when I came here was to stay mutual and make sure I handed this bank off to the next generation healthier than when I found it. I think this merger helps us to ensure that. Now we spread those expenses over a bigger base.”

That’s not to say Greenfield Cooperative wasn’t already growing, having increased its deposits by an average of 5% to 6% annually in Tucker’s 13-year tenure, effectively doubling that figure from $175 million to $350 million.

“When we looked at where we might grow next, we were looking at Hampshire County,” he told BusinessWest, adding, however, that a merger with a similar organization made more sense than building more Greenfield Co-op branches there. As it turned out, he found a sympathetic ear in Stapleton.

“We had a lot in common with Northampton Cooperative Bank,” Tucker went on. “Bill and I had been talking off and on for a number of years. That happens a lot in the industry.”

With the approval of each bank’s 11-member board, the merger underwent the normal regulatory processes and became official on April 1, just over five months ago. As for the directors, the banks simply merged them into one 22-member board, which will be whittled down through impending retirements to something more manageable. Board meetings are typically held in Deerfield, between the bank’s two namesake cities.

“There will always be a few bumps, but it’s been pretty smooth,” Tucker said of the merger, noting that the two institutions already used the same Connecticut-based financial-technology service, COCC, and there was no duplication of account numbers, allowing Northampton Co-op customers to keep their checks and debit cards. Those customers also have access to new financial services and low-cost Mass Save energy loans through Greenfield Co-op, as well as programs like IDSafeChoice, an identify-theft protection service Greenfield partnered with a decade ago.

Meanwhile, the merged institution is finding efficiencies and cost savings in pending retirements. “I had three senior officers scheduled to retire this year. After our merger, I only had to replace one; for the other two, we used people in Northampton.” 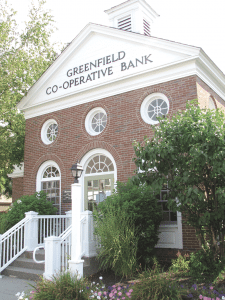 Greenfield Co-op has been headquartered in the same location since the 1940s, while both it and Northampton Co-op boast histories spanning well over a century.

At the same time, Tucker said, “a lot of our customers are happy they can do business in the Northampton-Amherst neck of the woods. We’ve added commercial-lending capabilities down there; they really didn’t do commercial loans, but we hired two new lenders to service the area, and stationed one of our investment-services guys, from Florence, in Northampton.”

Moving from $39 million in capital to more than $60 million after the merge also allows Greenfield Co-op to offer larger loans, including SBA loans. “Our lending house limit was 10% of capital, so that goes from $3.9 million up to $6 million. Sometimes customers outgrow you; it’s nice keeping pace with our customers.”

Employees have already taken advantage of new career opportunities as well, with some already moving to branches closer to where they live. “It gives a broader career path for some people,” Tucker said. “I think that will continue as we grow.”

Tucker spent 20 years at SIS before moving to Easthampton Savings Bank in 1999 as senior operating officer and in-house counsel, spending three and a half years there before Greenfield came calling.

A lawyer by trade, he never planned on advancing that far in the banking world when he started out as an SIS teller in 1979 while attending law school at night. “I was planning to be there four years, then go on to my own practice, but the CEO of SIS back then was a lawyer who had started doing real-estate closings back in the ’50s. He encouraged me, and I ended up staying; by the late ’80s, I got my master’s in banking law.”

The dual expertise served him well as he rose to higher positions, and he has never lost his passion for learning more about his industry — especially at a time when online and mobile banking platforms have changed the way banks interact with their customers.

“There will always be a place for brick-and-mortar customers who want to be able to talk to a person,” he said. “That’s the local edge; otherwise, you might as well bank with Capital One out of Ohio. But, at the same time, some customers never come into the bank. I remember when teller lines were out the door to cash Social Security checks, but that’s all direct deposit now. There are still lines, but it’s to socialize and update their passbook and see the tellers, who are also their friends. You don’t have to come into the bank anymore, so branches are smaller now.”

Although he foresees working about seven more years before retirement, the rapid changes in banking — both regulatory and technological — help drive Tucker’s involvement with organizations like the Mass. Bankers Assoc., which he chaired until last year, and the Federal Reserve Bank in Boston, where he currently serves on the board of directors. “Part of that, for me, is continuing to learn, staying active in the industry. And it’s an industry, I think, where we do a lot of good for people — and it’s fun.”

He says he’s acutely aware of the roles community banks play in the business fabric of Western Mass., from philanthropy and civic involvement to loan support for families and businesses.

“We are lucky to have this many healthy community banks in the region,” he told BusinessWest. “It’s competition for us, with literally a branch on every corner. But if I’m a local customer, and I think of the dollars contributed, the volunteerism … that’s something irreplaceable, it really is.”

For example, the bank recently donated money to both Baystate Franklin Medical Center in Greenfield and Cooley Dickinson Hospital in Northampton, gifts that, Tucker noted, aren’t totally altruistic, in the sense that healthy individuals comprise healthy, vibrant, attractive communities. “We want people to buy homes here, start businesses, send their kids to school — all the things that make a community a community.”

As Greenfield Cooperative Bank seeks to grow in its expanded footprint, Tucker continues to seek input from customers on how to improve their experience.

“My door is open, unless I’m in a meeting, and customers come in all day and make comments, good and bad, but mostly good,” he said, adding that he regularly visits each branch to chat with staff and customers. “If this was Bank of America, it would be physically impossible for the CEO to do that.”

He recognizes that not every interaction with a bank is positive — the rare foreclosure being one example. “But we don’t want to own homes; we want to keep people in their homes. We help finance homes, finance businesses, help pay for college or a new car or home improvements, help people plan for retirement or plan for their kids’ college — all pretty fun things.

“We get to interact with people on a lot of positive things,” Tucker concluded. “That’s part of the reason I fell in love with the industry. I didn’t think I’d like it as much as I do.”