Dinn Bros. Trophies was founded in 1956, and 50 years later it continues to evolve and change with the times. Change is constant in a business that may seem simple, but features immense competition and never-ending deadlines, and requires investments in new technology and strong relationship-building capabilities. By meeting all these challenges, Dinn Bros. has etched its name in Pioneer Valley business lore.

Bill Dinn remembers how it all started.

It was the summer of 1956, and one of Springfield’s amateur baseball leagues was in trouble and looking for help. The company it had hired to create trophies for that season’s top finishers failed to deliver, and at the 11th hour the league turned to Dinn’s brother Paul, an engraver, to fill the order. Bill stepped in to help, and a company was born.

A half-century later, many things have changed. The technology used to create plaques, trophies, and recognition items has improved exponentially; where once the company created three pieces a day using a hand engraver, it now completes three a minute with state-of-the-art computer systems and laser engravers. Meanwhile, orders are now taken via the Internet and a Web site that is enabling the company to expand its reach across the country and into Canada.

But many things haven’t changed.

Most orders still come in at the 11th hour, if not later, and the company’s specific promise to its many types of clients remains the same: “We won’t embarrass you,” said Bill Dinn, who is now retired but remains a visible force at the company, after years of serving as its head salesman.

“We had a particularly good showing in a pickle,” Dinn said of the company’s first order, adding that while that idea of avoiding embarrassment may seem strange, it has always been the crux of good business at a firm that manufactures and sells awards of all types.

“Imagine you’re at a banquet, everyone is there, you’re giving a speech, and you have to give an award to an important person … and the plaque isn’t there,” he explained. “That’s a big deal.”

He went on to note that, in many cases, the award — the actual hardware used to recognize the accomplishments of another — is the last thing people think of when planning a ceremony of any size.

“We’re always working against time,” he said, adding that it’s not uncommon for a large order due for a weekend event to come in on Thursday evening.

But tapping his forefinger definitively on the table before him, Dinn said no job is too big or too small. “It doesn’t matter if it’s one trophy for $6.95 or an order for 900 plaques that will cost thousands … it will be there.”

That guarantee is echoed by Dinn Bros. current senior management, Dinn’s three sons — Bill Jr., Paul, and Michael — who say that as a niche business, the company meets with a number of unique challenges, as well as many that all companies, especially those with both retail and manufacturing components, face.

Dinn Bros. offers plaques, trophies, medals, ribbons, pins, and other awards for various sporting organizations and events, as well as a wide array of corporate awards and other tokens of appreciation, such as desk sets and engraveable bowls and trays. All products are assembled and engraved on site at the company’s West Springfield headquarters, and sold via the Internet and through three showrooms in West Springfield, New Haven, Conn., and Stoneham, Mass.

Sports awards have remained the largest single product line offered by Dinn Bros., representing about 70% of sales, though corporate business is growing, in part due to a concerted effort on the part of the company.

And with the sports market comes a number of challenges that few not in this business could appreciate, according to Paul Dinn, president.

“Retention of contracts is a big challenge,” he said. “It’s not like we’re a paper company dealing with a business. In that case, if we were doing a good job and our prices were competitive, the company we were serving would probably stick with us.”

But sports programs and teams, especially those for children, often have a new person handling awards ceremonies each year, said Dinn, and tournaments, road races, and other charity events are hard to track; many are not established enough to have a Web site, or even a formal mailing address, let alone a contact person.

“There are a lot of volunteers and a lot of turnover,” he explained. “The Internet helps us with research, and every business has to build relationships. But we have to build them over and over again.”

In addition to the matter of maintaining repeat business under those conditions, educating the public about its products is another challenge, said Bill Dinn Jr., who oversees production at the company.

“Showing people just how to use the products is a bigger concern than many might think,” he said. “That’s because it’s not an everyday type of thing, ordering and giving an award. You don’t think about it until you have to do it. It’s up to us to educate the consumer on everything from appropriate wording to how to work awards into tight budgets.”

Its also a business with both peaks and valleys in terms of volume, and those busy periods don’t fall during what might be considered traditional peak periods. The holidays, for instance, are deadly quiet, while the spring months usually necessitate adding seasonal employees to the firm’s core of 100 employees.

But to address those challenges, Dinn Bros. has moved ahead aggressively with a wide set of recent initiatives, all aimed at streamlining the manufacturing process, expanding the company’s reach both nationally and internationally, and upgrading technology in order to stay competitive against similar outfits, Internet-based companies, and sporting goods stores that create trophy subsidiaries.

Many of those changes have been instituted or highlighted this year, as the company celebrates its 50th year in business. Its Web site was redesigned, new catalogs were created to boost corporate business, and several new laser engravers were purchased and installed to expedite and streamline the assembly and personalization processes.

“We’re adapting to the modern age in order to drive business,” said Michael Dinn, vice president of sales and marketing. “Electronically, we’re better than ever, and that helps streamline the process and allows us to prep as much as we can for orders that have yet to come in.”

He noted that the company’s Web site, which pulls in roughly a third of all business and is still growing, once lagged behind the firm’s phone center, which employs customer service representatives to take orders from across the country. But over the past year in particular, Web-based sales have eclipsed phone transactions and have pulled in business from new areas, including the mid-Atlantic states, Alaska, and, most recently, Canada, where the company is making its first earnest foray into the international market.

“Our site allows for convenience in ordering, but it also assures people that we’re not a fly by night operation, or a little rinky-dink trophy shop,” said Dinn, who added that Internet sales have also been augmented by offering live assistance online for customers, a service that was put in place two years ago. Customers can send instant messages to a Dinn Bros. representative during specified times to ask questions, and are also notified when a product order is received and shipped, along with a tracking number. “That way, we’re never out of reach.”

Web sales have also helped in promoting corporate-recognition products, as has a new catalog devoted solely to those lines, in response to a growing business-to-business market.

“Many people think this is a business that stays the same year after year, but the industry does change,” said Paul Dinn, “and one change of late has been our role in the increase of corporate recognition programs. People are holding more organized events and seeing recognition as an important tool for morale and retention.”

Many of the services offered through some new technological upgrades are geared toward that burgeoning market, allowing for the etching or four-color printing of company logos and for products that best serve the corporate sector, such as desk sets and retirement gifts.

But Dinn added that while Internet sales allow for quicker processing and a smaller margin of error on all orders — all copy to be engraved can now be downloaded directly to a central computer system — awards of all types still intrinsically have ‘last-minute’ components at the assembly level.

Engraving recipients’ names is the most obvious, but figureheads for trophies — everything from the traditional runner, golfer, or bowler to a gold-plated foot, used as a gag during staged productions of the Monty Python-inspired Broadway play Spamalot — are attached to the base as orders are received, and customers sometimes have special requests for logo engraving or printing that differ from order to order.

“No matter how efficiently we take the order, we must still identify the deadline and work backwards,” he said. “To that end, we’ve invested in the equipment we need to keep us on the cutting edge, and the technology makes our work much easier than it ever has been before. Every year, we keep investing in better technology — our equipment parallels the personal computer market, in that it becomes obsolete easily.”

Those investments include state-of-the-art computer systems and laser engravers, such as the six Xenetech machines that now do the work that a large, bulky hand engraver did years ago.

Still, even with all of the changes at Dinn Bros., some things remain the same as they did 50 years ago. That heavy hand engraver sits in the main production area, right next to one of the new laser stations, serving as a reminder of how much the times have changed.

That amateur baseball league that reached out to Paul Dinn 50 years ago is no more, but it’s likely that some of the Dinn trophies awarded to players still exist, somewhere.

Like the company that produced them, they’ve managed to stand the test of time. 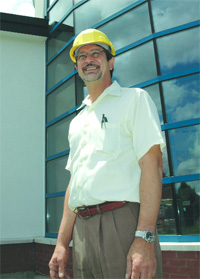