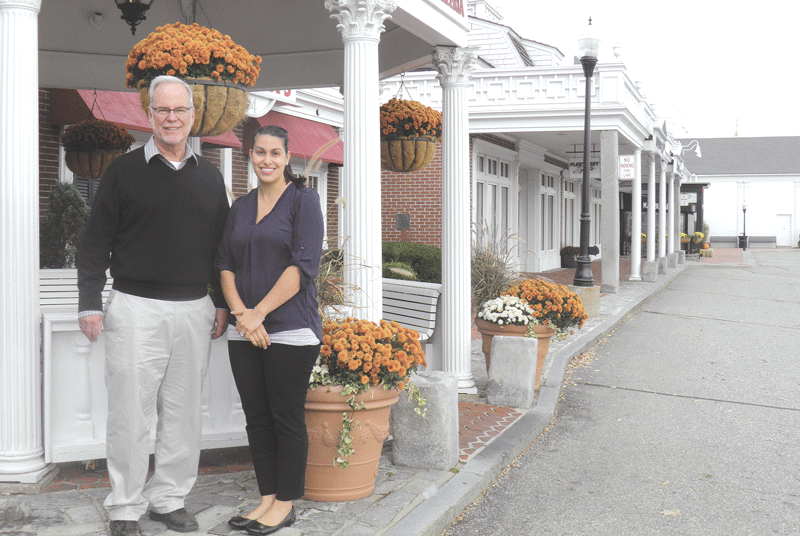 Richard Walker and Antigoni Proctor say the addition to the Longmeadow Shops will enable retailers and eateries to stay competitive in a rapidly changing marketplace.

The economic landscape in Longmeadow will soon be changing — quite literally — and the new development is just what this residential community needs — in many ways.

Indeed, for the first time in more than two decades, the Longmeadow Shops will undergo a major expansion, which will include a 13,100-square-foot space with a drive-through to accommodate the growing needs of CVS.

“Voters approved a zone change in February for an adjacent 1.2-acre parcel that we have owned since we purchased the Longmeadow Shops 22 years ago,” said Steve Walker, regional property manager for Grove Property Fund LLC.

“More than 80% percent of residents approved the change after we showed them what we want to do; we felt it was important for them to know as much as they could about our plan,” he continued, explaining that they will add a new, 21,000-square-foot building, which will be separated from the current strip that houses shops, banks, and eateries, by Bank of America’s drive-through, located on the far end of the existing structure.

The site plan has received approval from the Planning Board, and although some might wonder why Grove would want to expand now after leaving the grassy parcel empty for so many years, Walker said several factors provided the impetus.

“We felt the time was right. Longmeadow has a new high school that was completed last fall and the town has a lot of new residents,” he said. “CVS has had several conversations with us about expanding, but we never had room to accommodate them. The space they are in is too small for their needs, and elderly patrons as well as parents with sick children often need to park quite a distance away to get inside the store.

“In addition, we’re trying to strengthen our position in the marketplace,” he went on. “Change is good, and we want to provide shoppers with more variety, and make this into a larger lifestyle center, which will help our retailers stay competitive, especially since Internet shopping has taken a toll on all local retail businesses.”

The expansion of the Longmeadow Shops is expected to generate an additional $80,000 to $90,000 in taxes each year, which makes this development significant for another reason.

Indeed, although officials say the new revenue will help, they have serious concerns about their ability to sustain services over the next decade due to a lack of developable land, and therefore, a distinct lack of opportunities to generate new tax revenue.

“The state limit on how much you can charge residents on their home is $25 per $1,000, and we are projecting we could hit that limit in five years,” said Selectman Chairman Richard Foster. “There are some variables, and a debt exclusion is possible, but it would mean no increases to the town budget and no new hires, and if we reached that figure, we would be faced with a possible reduction in services.”

He knows other communities have had to deal with the same situation, but said they usually have land that can be developed.

“Our town is 96% residential and 4% commercial, so what makes it so great also cripples it, and everything we do affects homeowners’ tax bills,” he noted. “Our infrastructure is aging and we need to start replacing it, which will cost millions. We need to keep moving forward, but I have become very concerned as I watch tax bills increase each year. There is a finite limit to how much people can pay and we need to find new ways to generate income.”

For this, the latest installment of its Community Spotlight series, BusinesWest explores just how Longmeadow intends to go about that all-important mission.

Town Manager Stephen Crane said rezoning the land next to the Longmeadow Shops from residential to commercial certainly shines a spotlight on challenges the town could face in the future.

“We have the highest combined tax rate in the state; we instituted a split tax rate for the first time this year, but there is such a small amount of developable land left,” he told BusinessWest.

To help solve that problem, the town has engaged the Pioneer Valley Planning Commission to help officials update the community’s long-range strategic plan, with the goal of assessing development opportunities in the community.

“We have a AA bond rating, and the town is very well- managed, but the lack of growth isn’t keeping pace with the increased cost of operating the town,” Crane said. “So, we’re taking a proactive stance to find areas that are underdeveloped or undeveloped and plan to look at any restrictiveness in our zoning that impedes new development.”

The PVPC will re-evaluate the land-use portion of a document titled, Face the Future: The Long Range Plan of 2004, and present town officials with options for redevelopment. Foster said officials will study three sites that could potentially be used as recreational, commercial, or residential development at some point in the future, if residents voted in favor of such proposals. They are:

• The 20.1-acre Water Tower Property on Academy Drive near the East Longmeadow line;

• 65 acres of developable land in Turner Park, the town’s largest tract of unused property (the park contains more acreage but it is composed of wetlands and ponds). “From a developmental standpoint, this area could be a phenomenal site due to its natural features,” Foster said, adding that building a senior community on the property might be a viable option;

• Either of the middle school properties, since one of them may become available if the facilities are consolidated, a move which some have suggested. Williams Middle School sits on 16.1 acres, while Glenbrook Middle School is on 20.5 acres.

Last March, the School Committee voted unanimously to recommend the submission of two statements of interest for a new middle school to the Mass. School Building Authority, based on their age and limited amount of space. The district would like to move students from both schools into a new facility.

Although the selectmen denied the request, they had an engineering firm update a report they had done several years ago by re-inspecting the schools and bringing cost estimates up to date.

“But the school department may come back with the proposal again this spring,” Foster said, adding that the middle schools could be consolidated. “We’re looking at a lot of things right now.”

Due to that and the fact that the town needs to establish new sources of revenue, officials are being diligent about fleshing out all possibilities, he went on.

“I’m striving to establish a plan that is so dynamic that future boards will institutionalize it and accept it and continue to reinforce its development,” Foster continued. “It could become our 15-to-20-year master plan and the number one objective of our community.”

Meanwhile, the plans for expanding the Longmeadow Shops are becoming reality.

And as she went into detail on them, Grove Property Fund Manager Antigoni Proctor first explained the meaning and value of a lifestyle shopping center.

“It’s a place where people can have a cup coffee, shop for clothing and gifts, get their hair and nails done, pick up medicine, have dinner and visit with their friends,” she said, adding that this is what the shops have become. “We want it to be enjoyable to come here.

“It’s a place where people can socialize and buy things they want and need. They can also do their grocery shopping across the street at Big Y, or buy children’s toys at Kiddly Winks in Williams Place,” she continued as she pointed to the shopping complex, which is fronted by Williams Street and separated from Longmeadow Shops by an island containing a gas station, Big Y and Bliss Road, which runs in front of the shops.

Walker said Grove is excited about the expansion and grateful to the town and its residents for approving the plan.

“This is a really unique property. It sits in the most affluent community in Western Mass and it’s not right off a highway,” he said. “It has become Longmeadow’s downtown and it’s a great place to do business.”

Construction is expected to begin early next spring and be completed by November 2016. The cost is estimated at $3.1 million, which includes adding a fourth entrance with a new curb cut, as well as a complete reconfiguration of the parking lot. In addition to 139 new parking spaces, the current lines will be blacked out, the lot will be resealed, then it will be restriped to provide room for more vehicles.

“The new parking design will make it easier for people to get in and out of the shopping center,” Walker continued.

CVS will move from its current 7,900-square-foot space and become the anchor tenant in the new structure. “Their new store will contain 13,100 square feet, and the drive-through will help elders, parents with young children, and other people who don’t want to go into the store to pick up prescriptions,” Walker said.

That will leave about 8,000 square feet in the new building, he went on, adding that Grove is having discussions with a national retailer interested in leasing about 6,000 square feet and they hope to sign a contract within the month.

“We’re really excited about the tenant,” he said, noting that the company is taking a proactive stance in filling the remaining space and hopes to get a new restaurant in the building. “We also have to backfill CVS’s current space as well as the space that was vacated when Semolina Bread moved out this month.”

To that end, Proctor recently visited The Promenade Shops at Evergreen Walk in South Windsor, Conn., hoping to find a shop or eatery that would be a good fit for the Longmeadow Shops.

“We try to find the best national, regional and local tenants that will complement what we already have here,” Walker said.

Crane believes the expansion will be beneficial on a number of levels.

“It will provide additional tax revenue as well as giving the community more retail options. Something like this doesn’t happen often in Longmeadow,” he noted.

Foster said Longmeadow is doing everything possible to generate new revenue, and the addition of a meals tax two years has generated $125,000. But it’s not nearly enough, so the quest to find ways to generate new income will continue. “We’re stretching our thought process as far as we can and hope PVPC will bring new ideas to the table,” he noted.

Meanwhile, the Longmeadow Shops will be expanded, and the town will remain a quiet, bucolic place with a small number of businesses that do very well.

“Longmeadow is a well-managed community that offers residents and businesses a wide range of high-quality services,” Crane said. “We don’t have many opportunities for commercial expansion, so we are being proactive and in spite of our limited economic development tools, we are trying to apply them in the most effective way possible.”