Sosik Succeeds Hogan at the Helm of Easthampton Savings Bank

Matt Sosik says he wasn’t looking for another job, and, in fact, didn’t have an up-to-date copy of his résumé at the ready.
“I didn’t need one — I loved what was I doing,” said Sosik, then CEO of Hometown Bank, formerly Webster Cooperative Bank, which he had guided to exponential growth since arriving in 1997. “We had a great professional family there that was certainly hard to leave, and frankly hard to even think about leaving behind.”
But when Bill Hogan initiated discussions with him several months ago about possibly joining the competition that would identify his successor as president of Easthampton Savings Bank, Sosik’s imagination took him to where he never thought it would.
And the reason was fairly simple, he told BusinessWest just a few weeks after assuming his new post at the institution on Main Street, in the shadow of Mount Tom.
“This particular opportunity caught my attention because I’ve known Bill for many years, and I’ve known others inside the bank for a number of years,” said Sosik, who took the helm on June 17. “And I’ve come to know a lot about Easthampton Savings Bank, and the cultural fit was perfect. Culturally, Hometown and Easthampton are very similar institutions.”
Sosik takes the helm at ESB at an intriguing time for the bank — and the region’s banking sector in general. “Hyper-competitive” was the word he used to describe the financial-services landscape in the region, noting that many communities are saturated with branches, if not oversaturated, and many institutions, including ESB, are flush with capital and looking for opportunities to grow in a region where there has been little economic growth.
Thriving in this climate will require a plan, said Sosik, who said that drafting a strategic initiative, or updating the one already in place, as the case may be, is at or near the top of his to-do list. But it will also require patience, he said, noting that this is one of the lessons he’ll take with him from his time at Hometown, were he shepherded the bank from a mere $33 million in assets to more than $340 million.
“This is a long-term process,” he told BusinessWest. “If you try to do this in six months, you will fail. I spent 17 years at Hometown building that balance sheet, and it’s a pretty attractive balance sheet. It’s going to take awhile, you have to be patient, and we have the business structure to be patient; we have a lot of things going for us.”
At present, Sosik is still in what he called “evaluation mode,” meaning that period when he comes to familiarize himself with the staff and the bank’s immediate goals — and strategies for reaching them.
“The next frontier here is really about leveraging the strengths of the institution,” he said, summing up what he’s learned — or already knew before he arrived. “We’re a well-capitalized bank, and we have plenty of growth opportunities because of that capital. Other banks of similar size in the Pioneer Valley don’t have that luxury.”

Person of Interest
Sosik began his career in financial services as a bank examiner with the Federal Deposit Insurance Corp., working in Massachusetts and Northern New England. In 1996, he joined Webster Cooperative, and a year later became its CEO.
Over the next 16 years, he implemented a wide-ranging strategic initiative that included a name change to Hometown Bank, as well as geographic growth (from one branch to six), acquisition of the Athol-Clinton Cooperative Bank in 2011, and more than tenfold growth in total assets.
When asked how all that was accomplished, he said simply, “from grinding it out.” He then elaborated, noting that the bank was very small when he arrived, and needed to grow simply to survive.
“That helps energize the team and yourself every day, knowing that you have to get to a certain place so that you can remain viable,” he said with a laugh. “It allowed the fire to remain well-lit, knowing that you were fighting for your long-term survival.”
The situation is much different at ESB, he acknowledged, adding quickly that there is still a strong need to grow, and the bank has the inclination, capital, and opportunity to do so.
And as he talked about what might come next, he said that, while he’s spent his entire banking career in Central Mass. and, more specifically, the Blackstone Valley (Webster is roughly 20 miles south of Worcester), he is quite familiar with the Western Mass. market, its challenges, and its opportunities.
He told BusinessWest that the Central Mass. and Western Mass. banking markets are similar in many respects — both regions have been experiencing relatively flat economic growth, he explained, while the respective banking sectors have been extremely competitive, with many players and some new arrivals in recent years.
But there are some distinctions, he said, adding that perhaps the most significant is that many of the community banks in this region are quite larger than the ones he encountered in Central Mass., with many at or well above the $1 billion mark in assets, a milestone ESB is now approaching.
And this makes them stronger competitors, he went on. “These larger banks simply have more resources, and they can make longer-term decisions and absorb more risk.”
Summing up the situation, Sosik said that ESB, like other banks in this region, must “manufacture their own market share,” which means, in essence, taking it from rivals.
And this ‘manufacturing’ is not easy, he said, noting both the amount of competition and the fact that many of the large regional and super-regional banks are becoming more effective competitors — a trend he expects to continue and accelerate.
“They got away from some of the things you need to do to be good competitors,” he explained. “And they recognized that, and now they’re seeing some of the value of banking on Main Street again, for a variety of regulatory and financial reasons. That shift has about run its course.”
But growth can be attained, he said, stressing again that whatever takes shape in ESB’s new strategic plan, the overriding philosophy will be slow and steady.
“We have to be the better competitor and the smarter competitor,” he said. “We have to do our job of serving the customers in the community better than the ladies and gentlemen down the street.”
When asked what direction the bank’s growth initiatives will take — meaning both strategically and geographically — Sosik was shy with specifics, as might be expected. He did say, though, that the bank, which has 10 branches stretching from Westfield to Belchertown, Agawam to Northampton, will be “open-minded” when it comes to future expansion, but also smart.
Elaborating, he said that means choosing potential branch locations carefully and, in general, avoiding those communities, or regions, that are already saturated — or worse.
“We’re certainly open-minded to going where we believe there are opportunities to leverage what Easthampton Savings Bank does best,” he said, leaving plenty to the imagination. “We won’t be relying on a strict geographic pattern — I don’t mind skipping over markets to get to a market we think we can find success in — but there are obviously places that are very much overbanked; we’re not going to stick our nose in there, but we go can beyond there and to places where we think we can do well with what we do best.”
And while likely expanding geographically, ESB will also be leveraging its capital to grow its commercial-loan portfolio, said Sosik.
He acknowledged that many other banks in the region, including those highly competitive community banks he mentioned, are looking to the same, but he said this represents one of the more solid growth opportunities at present, and a key element in bringing an effective mix to a balance sheet at a time of narrow margins.

By All Accounts
Summing up the challenge ahead for himself and the institution he now leads, Sosik said simply, “there is no quick fix for the hyper-competitive market, there is no quick fix for the fact that all of these bankers and banks are almost tripping over themselves.
“This is a long-term process to ensure that you stand out, and ensure that you are relevant in the marketplace,” he continued, hinting that his philosophy will be to attempt a slow-and-sure fix.
“Growth is definitely an important factor to running a community bank like Easthampton Savings successfully,” he said in conclusion. “It’s something we’re going to work hard to attain.” 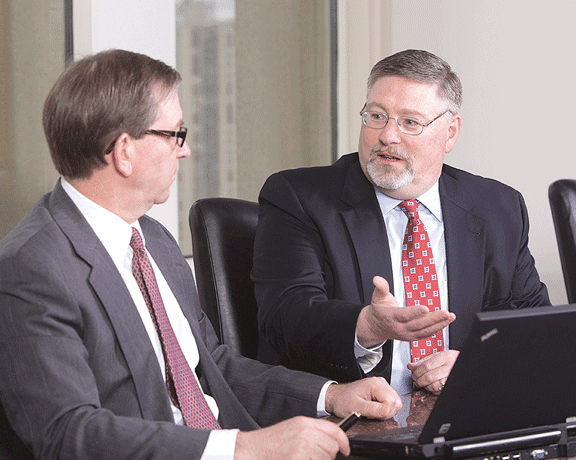