Bullying and cyberbullying are pertinent issues for teens today, and this summer 40 students in the Summer Legal Institute at MassMutual played the role of an attorney and presented arguments for clients during a mock court trial. Some won awards, but they all gained valuable insights into the law as they worked with local attorneys and were given opportunities to hone their networking, critical-thinking, and public-speaking skills.

Nia Major used to get really nervous when she met someone new and had to talk with them.

But after completing a week-long Summer Legal Institute session (SLI) at MassMutual last month, the 15-year-old from Sabis International Charter School in Springfield gained so much confidence that she was named a grand-prize winner in an oral-argument competition, where she played the role of a lawyer in a mock case that involved name-calling and cyberbullying.

“Now I can look new people in the eye and discuss things,” she told BusinessWest, adding that she was surprised at how well she did in the competition.

Major’s opinion of careers in the law field also expanded as a result of her participation in SLI, and although she wants to become a pediatrician, she now finds the legal profession an appealing option.

The teen was one of 40 students recruited from local schools to take part in the program last month, which is in its fourth year.

Since its inception, MassMutual has provided more than $100,000 to fund the SLI, which is free to all students. In addition, its attorneys have given more than 250 hours of their time to educate participants about the legal profession and help them hone their arguments for the annual competition.

Major and three winning peers will travel to Washington, D.C. this fall to take part in a national program held by Just the Beginning Foundation (JTB), a nonprofit that offers students free educational programming in hopes of increasing diversity in the legal profession and inspiring underrepresented, underserved, and at-risk students to attend college.

Mark Roelling told BusinessWest he decided to establish the Springfield branch five years ago after he met with Judge Ann Williams from the Fifth Circuit Court of Appeals in Chicago during a meeting of the National Bar Assoc.

Roelling is executive vice president and chief legal counsel at MassMutual, and Williams told him about the JTB, which she helped create in response to a speech by former President Jimmy Carter that celebrated the integration of the federal judiciary. Its programming includes summer sessions where students work with volunteers from the legal community in partnership with a university to introduce them to the practice of law.

The discussion led to the birth of the five-day MassMutual Summer Legal Institute. JTB provides the curriculum, which changes annually, and Western New England University and local law firms and judges help the students learn valuable information about the profession.

“I believe this program adds value to the community because it provides opportunities for young adults to see the benefits of going to college as well as the benefits of pursuing a career in the legal profession,” Roelling said. “It also adds value to the legal profession because people of color are underrepresented in the field of law, and it’s good for the volunteers as it gives them the opportunity to give back.”

SLI is open to students who will be high-school freshmen, sophomores, juniors, or seniors, and so far, 125 students from schools with diverse backgrounds have participated in the local program: 51% have been African-American, 20% have been Hispanic, 16% have been white, 8% have been Asian/Pacific Islanders, and 5% have multiple ethnicities.

MassMutual Assistant Vice President and Counselor Patrice Sayach said the five-day SLI curriculum is intense and requires students to work at home in the evenings.

This year it began on Monday, July 11, and during the morning, students were introduced to the legal system and learned about a Supreme Court decision before they were presented with a fictional case and the facts that went along with it.

The case was important because each student was assigned to serve as a defense or prosecuting attorney and had to craft convincing arguments that they presented at the end of the week before mock judges in an oral-argument competition.

MassMutual attorneys served as coaches and met with them in small groups to help them understand what facts were relevant and how and why they could be used in the courtroom.

“We showed them this is the kind of thing lawyers do on a day-to-day basis, that they need to understand the law and how it applies to world situations,” Sayach said.

After lunch, they met with a panel of MassMutual attorneys who talked about their backgrounds and allowed the students to ask questions.

Tuesday was spent at Western New England University, where members of the Law department taught the group networking skills that included how to give an elevator pitch, how to introduce oneself, how to enter and leave a group in an appropriate manner, and how to follow up with people they met. There was also a session on financial literacy that focused on the college-admissions process and financial-aid resources.

In addition, the students traveled to the Bulkley, Richardson and Gelinas, LLC law firm, had lunch with the attorneys, and took part in oral-argument reviews.

The day included a seminar on professional etiquette, and each student was given their own business cards, which they used later during a networking session with seven judges, attorneys from local law firms, and top MassMutual executives and lawyers.

“The idea is for the legal community to work together to form a pipeline of diverse candidates who are underrepresented in the legal profession,” Roellig explained.

Wednesday began at the state courthouse in Springfield, where students observed a legal proceeding that dealt with juvenile abuse, which was followed by a panel discussion with three judges, facilitated by MassMutual attorney Dorothy Varon.

In the afternoon, they visited the federal courthouse, where Judge Mark Mastroianni presided over a mock trial. The students had prepared for it in advance, and some students served as members of the jury, one acted as the bailiff, while others played the role of witnesses or were assigned to teams of mock attorneys.

Sayach noted that all members of the jury agreed that the defendant was guilty, except for one student who was able to convince his peers that reasonable doubt existed.

“The students took the case very seriously,” she told BusinessWest. 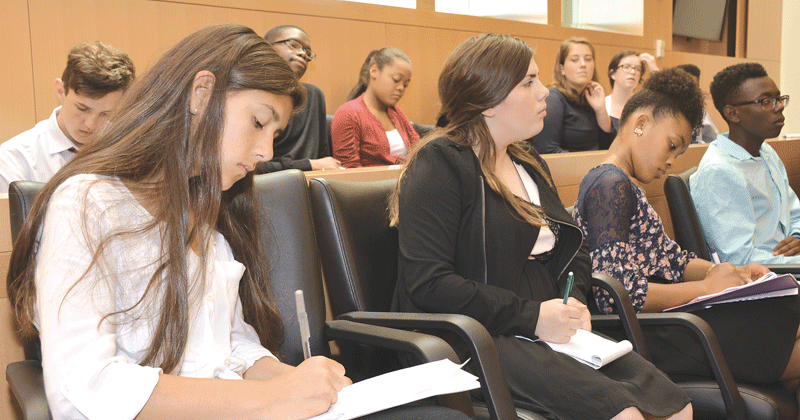 Students act as members of the jury as a hypothetical case is tried before them.

The day ended with a presentation by a U.S. marshal and additional small-group oral-presentation preparations and reviews.

On Thursday, the students went to Hartford, Conn., where they continued to work on their final oral arguments. After lunch, they visited Day Pitney LLC, where they met with attorneys who helped them polish and perfect their presentations and told them about the schooling required to pursue a career in law.

The oral-argument competition was held Friday at WNEU School of Law in a mock courtroom, and MassMutual attorneys served as judges. After the competition, the students toured the law school and attended a negotiating session before being divided into pairs and given a problem to negotiate.

At the end of the day, a graduation ceremony was held, and awards were presented, including a trip that four students won to fly to Washington, D.C. and participate in a day-long JTB event that will include a tour of the Supreme Court, lunch with a Supreme Court justice, a visit to a local law firm where they will network with lawyers in the D.C. area, additional programming, and some sightseeing.

BusinessWest recently met with the winners of the oral-argument competition, who had high praise for the program.

“It was fun,” said Karissa Coleman, an incoming 10th-grader at Springfield Central High School, who noted that, although she has always been interested in a law career, the program made it even more appealing.

“This helped me come out of my shell, and I found that oral arguments came naturally to me. I didn’t know how much work lawyers put in before they went to court, and I learned they really try to look for little details that can make a big difference to help their client,” said the 14-year-old. And although she called the experience in the courtroom “nerve-wracking,” her rebuttal was so refined, it helped her win the award.

Jada Ficarra, who will enter 10th grade next month at Sabis International Charter School in Springfield, enrolled in the program because she took part in a model Congress at her school and likes to debate issues.

“It taught me a lot about law. It’s really a broad field, and I found out there are many different careers in the field to choose from,” she said, noting that she talked to real-estate, divorce, and corporate attorneys, as well as some who specialize in litigation.

The teen hopes to get a summer job next year from contacts she made, and although she wants to become an obstetrician, a legal career has become her second choice.

Fourteen-year-old Jerry Moore III took part in the program with his sister Simone last year, and returned this year to get more experience.

“I hope to go to law school after college,” said the Hampden Charter School of Science student. “Litigation appeals to me; it’s really interesting, and it gives you a thrill to get all of the evidence, present it to the jury, and try to convince them that your side is right.”

He was nervous about the networking session, but the experience made him comfortable with it as well as with public speaking.

“I did a lot of work at home, refining my arguments, reading about the law, and researching what it says. It was hard, but it was also a lot of fun,” he reported, adding that, although the side of the case he had to argue was not the side he would have chosen on his own, it taught him that, “by preparing a good argument, it’s possible to win a case.”

Tinsae Erkailo took part in the program two years ago. He won the annual trip to Washington D.C. and is working as an intern at MassMutual this summer.

The 17-year-old moved to the U.S. from South Africa several years ago and said he never would have had the opportunity to meet lawyers in top law firms and make contacts that may help him get into Stanford University if he hadn’t participated in the Summer Legal Institute.

“The program made me realize that I needed to become a good speaker so I can get across what I want to say,” said the incoming senior at Springfield Renaissance School, adding that honing that skill helped him secure his current internship.

“The program also helps people identify careers they want to pursue,” he added. “Right now I am exploring what I want to do in the future, but confidence is really important no matter what you choose.”

Sayach agreed. “Students in the program improve their critical thinking, public-speaking, and networking skills, which will help them to become successful in any profession they choose to enter.”

WNEU School of Law Selects Sudha Setty as Its Next Dean 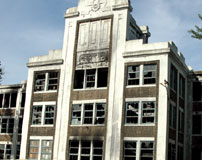