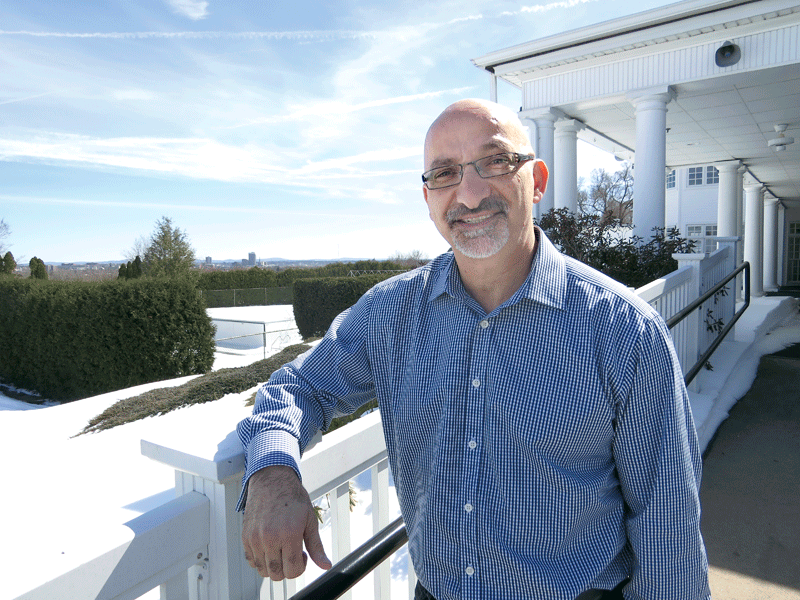 Camile Hannoush on the soon-to-be-renovated front porch at Springfield Country Club, which has a commanding view of downtown Springfield.

Camile Hannoush, managing partner for a group of new owners at Springfield Country Club, doesn’t buy into that argument that the younger generations don’t necessarily want to join a private club. He believes they will join if they’re given enough good reasons to do so. His group’s broad assignment, then — and they’re already hard at work on it — is to create more of those reasons at this venerable landmark.

Camile Hannoush says he’s been a member, and, therefore, a co-owner, of Springfield Country Club (SCC) for more than 25 years now.

“So nothing’s really changed,” he told BusinessWest as he talked about what he and a group of partners who acquired the 120-year-old club last month for $2.8 million intend to do with it, and for it.

He was saying that tongue in cheek, of course, because with this new ownership model — from member-owned to private control — and Hannoush’s new business card identifying him as managing partner, a great deal has changed.

And this is exactly the message that Hannoush and his fellow partners — his brothers Tony, Norman, Peter, and George, as well as Raipher and Joe Pellegrino — want to get across to members and prospective members: change — for the better.

It is coming, and will continue to come, in the areas where it is most needed, especially in the broad realm of financial stability, said Camile, who noted that SCC, like many private clubs, has struggled in recent years with membership and everything that comes with that challenge, especially cash flow, or lack thereof.

As we improve the situation here, once the remodeling is complete and members start coming and bringing friends and guests … once we bring that customer-service level up to five-star, I believe word of mouth will bring us the additional members we need.”

“Our first goal, obviously, is to increase membership,” he explained. “And one key to that is achieving confidence among the community that the club is a solid business and a solid place to be a member.

“One of the reasons we’ve struggled to bring in new members in recent years has been assessments,” he said, referring to the charges imposed upon members to cover everything from cash shortfalls to capital projects to course improvements. “And people don’t want to join a club where they’re not sure what their bottom line is going to be at the end of the year and how much it’s going to cost them.”

Change is also coming to the facilities — everything from improvements to the pool area to a broad renovation of the front-porch area, with its dramatic view of the Connecticut River and the Springfield skyline, to a new fine-dining restaurant now under construction (more on all this later).

What will also change is Hannoush’s typical workday. Also a partner with his brothers in Hannoush Jewelers and Giftology, a gift boutique with several locations including Longmeadow and Springfield, Camile says the country club will be his main focus for the foreseeable future. To prove it, he has taken over what used to be the “ladies card room” on the second floor of the massive clubhouse and created an office there (a new card room for women will be created elsewhere).

“I’ll be running the club this year — this is where I’ll be,” he said, adding that all the partners will be involved, but he’ll be leading the various efforts to return the club to the prominence it has enjoyed through most of its history.

SEE: Chart of Golf Courses in the the area

Hannoush said there is already a good deal of momentum at the club — roughly 25 new members (some of which are former members returning to SCC) have signed on since the change in ownership was announced, and he expects more in the coming weeks as the golf season, delayed by that massive March 14 blizzard, gets underway.

And once these new members bring their friends to the facility, and as word gets out about the many improvements and new amenities, he expects momentum to continue building.

“I believe in word of mouth,” he explained. “And I think that, as we improve the situation here, once the remodeling is complete and members start coming and bringing friends and guests … once we bring that customer-service level up to five-star, I believe word of mouth will bring us the additional members we need.”

For this issue and its focus on sports and leisure, BusinessWest talked with the Springfield Country Club’s new managing partner about how the facility intends to refine its game, build membership, and become the region’s club of choice.

Hannoush said he’s heard all that talk and conjecture about how the younger generations simply are not into the country-club scene as much as their predecessors, and this is one of the big reasons why many area clubs are struggling to find members.

He doesn’t exactly buy into that argument, and adds that a quick demographic breakdown of those new members he mentioned earlier helps him state his case. Camile Hannoush says the younger generations will join a country club if they’re given enough good reasons to do so, and that’s his mission at SCC.

“Many of them— in fact, most of them — are under 40,” he said of those new recruits, adding that he’s firmly of the opinion that the younger generations, or any constituency, for that matter, will join a private club if they have the wherewithal, and if you give them enough good reasons to do so.

In a nutshell, this new ownership group has taken on the singular mission of creating more of those good reasons.

There were already many to begin with, said Hannoush, listing the club’s location — just off Riverdale Street in West Springfield and, therefore, easily accessible to downtown Springfield and a host of area communities — as one of its best assets. Others include the stately, well-appointed clubhouse, diverse membership, and a course known for its impeccable condition.

Lately, though, this mix hasn’t been quite enough, he went on, noting that membership had dipped to around 240, down considerably from pre-recession days, and just over half the high-water mark of more than 400 around the start of this century.

To get those numbers back up, the new ownership team has commenced creating more reasons to join, starting with perhaps the biggest — financial stability and far less uncertainty about what members’ financial obligations will be to the club, as he noted earlier.

Of course, this stability can only come through greatly increasing membership, he went on, but not only getting members, but convincing them to spend time and money at the club.

“There’s a lot of overhead — this is a big, big business,” he said while essentially outlining the basic strategy in the business plan moving forward. “That’s why you need a certain number of members to be here, and why you need the members to dine here and spend time here.”

This simple fact explains the current emphasis on amenities with a strong focus on families, and meeting their specific needs, said Hannoush, who said the improvements to the pool area, including a new pool house and cabana, are a good example.

“What we’re going to try to do is bring back more family-focused events,” he explained. “We want to give them more reasons to come to the club. Improving the pool area and giving them more services there will bring them back.”

The extensive renovations to the porch area are another example, he said, as he took out his phone to show pictures of a planned 50-foot ‘fire wall’ that will replace a row of hedges, a new patio, new ceiling, tiling, and other improvements that will make that space more liveable and much more popular with members.

Another big step forward, he said, is creation of a fine-dining restaurant. The club has a grille room and a banquet room that can sit more than 200 people, said Hannoush, but it has long lacked the fine-dining facility that many clubs have and that most current and potential members relish.

One is being created in the former ‘19th hole’ just off the banquet room, he said, adding that the new facility, now walled off from the main room, will seat roughly 40 and have its own bar. Meanwhile, another room, the Brooks Room, with stunning views of the first and 10th holes and the setting sun, will also be renovated and used for small parties and receptions.

“So we’ll be more aggressive with social and dining memberships,” he explained, adding that another focus of change at the club will be its menu of memberships. It will be lengthened and diversified, with corporate offerings, a weekday membership, and other options, to accommodate different constituencies, create value, and, therefore, help bring in new members.

And, as he mentioned earlier, as those new members begin to talk about the club, and as their friends and guests get to experience what they’re talking about, he expects momentum to build.

Diamond in the Rough

As he completed his quick tour of the facilities and posed for a few photos before returning to his new office, Hannoush paused on the porch, gestured toward the Springfield skyline in the distance, and then back toward the clubhouse.

“This club is a gem — it’s always been a gem,” he said. “It just needed to be polished a little.”

Spoken like someone who’s been in the jewelry business his whole life.

Actually, it was spoken like someone who has been a member, and therefore an owner, of the club for 25 years. As he said, in one respect, nothing’s changing.

But in most all others, everything is changing — and for the better.