The Carle Celebrates a Decade of Connecting Generations 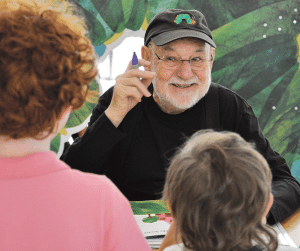 Eric Carle spends time with a mother and child at one of the museum’s many book signings.

Eric Carle may be legendary for his picture books for children, but kids aren’t the only ones welcome at the museum he founded in 2002.

“It’s a very unique concept in that it’s not a children’s museum,” said Alexandra Kennedy, executive director of the Eric Carle Museum of Picture Book Art in Amherst. “It’s an art museum that celebrates picture books and really welcomes children. There are a lot of things to do here.”

What’s most gratifying, she told BusinessWest, is the way the museum cuts across generations.

“One of our favorite things is when families come in — grandparents, parents, and children — and each have a different reaction to what they’re seeing,” Kennedy said, noting that older visitors wax nostalgic for the books of their youth, while children experience the “immediacy” of having a world of literature opened up to them.

“Children’s literature has a unique place in everyone’s heart,” she continued. “And educationally, it’s a perfect thing; it embodies both storytelling and art making. It’s about children’s first experiences — being read to, reading, looking at art, making all those observations. There’s almost nothing like it in terms of an educational or emotional experience; there’s nothing like sitting on the lap of someone you love, being read a story. Every parent has experienced that.”

The goal of the Carle, then, is to reflect that sense of wonder and connection, and to inspire a love of art through high-quality picture books.

“The idea for creating the museum came directly from Eric and Barbara Carle; they had traveled extensively in Europe and Japan and had seen many picture-book art museums — especially in Japan,” Kennedy said, noting that the island nation boasts at least 20 such museums of different sizes. “They came back from one of those trips and started thinking, ‘why don’t we have a museum here in the U.S. to celebrate picture-book art? Maybe that’s something we can do.’ So they thought about it long and hard and started working on developing a museum.”

The Carle opened in November 2002 alongside the Hampshire College campus, and has been marking its 10th anniversary with a yearlong celebration that began last fall. 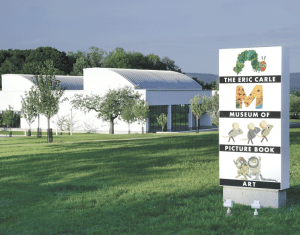 The Carle was an immediate success when it opened in 2002, far surpassing first-year attendance expectations.

“They really thought it through,” Kennedy said of the Carles. “They were very careful; they wanted to make sure people got to experience picture books in a lot of different ways — the idea being, they’d go to galleries to see a lot of original art, go to studios and use the same materials and techniques the artists use to make the books, come into the library to find their favorite books or listen to story time, and visit the auditorium for lectures about picture books and artists.”

The museum has no permanent exhibitions; the displays are typically works on paper, which are sensitive to light in the long term, so they’re switched out regularly and replaced by other items from the museum’s vast collection.

The facility is divided into three galleries. The east gallery hosts rotating exhibits of major artists or major themes, while the central gallery is a place to celebrate one specific book at a time. “It’s a wonderful way for people to understand what the process is like for making books,” Kennedy explained, noting that a Charlotte’s Web exhibit earlier this year featured drawings from E.B. White’s original publication. The gallery is currently celebrating Robert Zakanitch’s A Garden of Ordinary Miracles, and later this year it will spotlight drawings from Louise Fitzhugh’s classic Harriet the Spy.

Meanwhile, the west gallery features rotating exhibitions of Carle’s work — a must, since many guests travel to the museum, often from long distances, specifically to enjoy the work of its founder. He has given a great deal of art to the facility, and there’s more coming — at 84, Carle has a book release scheduled for this fall, and he continues to produce abstract art as well, as evidenced by the four massive, colorful murals gracing the museum lobby.

But it’s the participation of other authors and artists — and, in the case of deceased illustrators, their families — that has taken the Carle to its current level of prestige, Kennedy said.

“When Eric and Barbara were working on the concept of the museum, they probably didn’t anticipate what the response would be from artists and their families to the collection. Now we have more than 10,000 pieces in the collection, including large bodies of work from William Steig, Leo Lionni, Arnold Lobel — all major artists.”

Many current writers and artists, she explained, appreciate the idea of a place where their work can be both safely preserved and also occasionally displayed. One of those is Mo Willems, the Northampton resident and Caldecott Award-winning author and illustrator of Don’t Let the Pigeon Drive the Bus!, Knuffle Bunny: a Cautionary Tale, and the Elephant and Piggie books. He was the subject of an extensive exhibition at the Carle this year, and donated a bright red Elephant sculpture to the outdoor patio.

“We had a really big response to our Mo Willems exhibition. He’s definitely one of the most popular young picture-book authors here now, especially judging by kids’ reactions,” Kennedy said, noting that Willems visited and hid pigeons throughout the gallery, which young visitors were encouraged to find and exchange for temporary pigeon tattoos. “Mo is so playful, and his characters are so universal in their appeal. It has been the summer of the pigeon here.”

In addition, “he has been incredibly supportive bringing attention to the museum,” she noted. “When the Today show profiled him this summer, he said, ‘why don’t we shoot the segment at the Eric Carle museum? Suddenly, we were on the Today show. We’re fortunate that artists are very generous in sharing their own success with us; we’ve really appreciated that.”

In return, the Carle has shared its own success with the community, notably through two National Endowment for the Arts grants funding year-long art-education projects in the Maurice A. Donahue School in Holyoke, featuring guest visits from nationally noted illustrators. The first such project took place in 2011, and the second will begin this fall. “The grants really allow us to bring our work to other schools that may not be able to have it,” said Sandy Soderberg, the museum’s marketing manager.

One visiting artist, Jerry Pinkney — whose works include the Caldecott-winning The Lion & the Mouse, among others — spent two days in a classroom in 2011, exposing children to the art of illustration through hands-on, interactive activities.

“The best way for a museum to get involved in the classroom is to be there,” Kennedy said. “That’s what is most exciting for the schools and kids.”

She told of one boy in Holyoke who had kept a sketchbook at home. “It was something few people knew about; it wasn’t part of his public life. And suddenly, he’s in a class where that’s being celebrated. Maybe one day he’ll want to be an illustrator.

“The goal of the program,” she continued, “is to make kids feel comfortable with books and how they’re made, to be able to look at them and think about the artist, think about the writer. In our world, where everything is happening so fast, that’s a pretty thoughtful experience to have in the second grade.”

In addition, the Carle has made an effort to increase the participation of artists and writers at the museum itself, from book signings to activities for children. “One of the things I love is having an artist or writer come and do story time in the library,” Kennedy said. “Some of them make it really special; they bring in an easel and do something interactive with the kids.”

With just seven gallery exhibitions per year, those events, as well as auditorium lectures, are another way to include more artists and writers, she explained. “Of course, guests love it; they have an intimate experience here, getting to know a professional children’s-book artist.”

Meanwhile, “we’re traveling our work more, going into more places,” she noted, noting that the Carle has shown parts of its collection as far away as Korea and will bring an exhibition to Japan soon. “It’s important, not just because it raises the visibility of what we do here at the Carle, but it’s also germane to our mission. We think the museum should be displaying this work. We want to draw in young families and create that next generation of young museum-goers.”

Since its opening, the Carle has drawn more than a half-million visitors from around the world, including about 30,000 children on school-sponsored visits. The museum benefited from an opening-year buzz in 2002 and 2003 that surprised even the facility’s main proponents.

“They had unprecedented visitation the first year, far beyond what they expected,” Kennedy said. “We’ve now settled in around 40,000 to 45,000 per year, which is what they thought it would be.”

This past year, however, has seen a jump in visitation, which may have something to do with publicity from 10th-anniversary events, or other factors may be in play. “It’s always hard to guess why we’re seeing an increase, or even a decrease. I’m guessing it has something to do with the recovering economy.”

Meanwhile, a Boston-based group called the Highland Street Foundation, which sponsors Free Fun Fridays at museums across the Commonwealth, hosted a free event at the Carle recently that drew 1,470 people; typically, Kennedy said, if 800 people come through the door, that’s a big day. “So many people who had never come to the museum before said, ‘I always wanted to come here.’”

Hopefully, she said, many of them will return.

“I think so many people feel that art museums are intimidating in some way, that they have to have some special knowledge about art to appreciate it. We want to take away that concern,” she said, noting that the Carle emphasizes the experience of interacting with the art, rather than just the work itself.

“To see all these families connecting over books, unplugging for storytimes,” Soderberg said, “I don’t think we could be more proud of the museum right now.”

That’s a happy ending indeed to the Carle’s first decade — with much more of the story yet to be written.