×
Home Sections Back to School

Back to School Sections 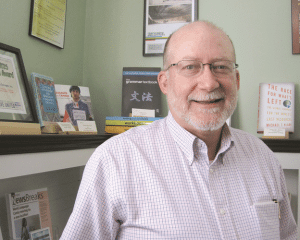 Neil Abraham says the five colleges have been collaborating as long as they’ve existed, but they’re finding new ways to work together.

The knot of Hampshire County schools known as the Five Colleges — Amherst, Hampshire, Mount Holyoke, Smith, and UMass Amherst — boast tens of thousands of students who share much more than a region.

They’re also able to attend courses on each other’s campuses, access free buses between schools, share library and dining services, attend open theater auditions, and much more, thanks to Five Colleges Inc., the Amherst-based consortium that has been dedicated, since its inception almost 50 years ago, to fostering partnerships and shared resources among the five institutions.

But even at the consortium’s inception, the concept of cooperation was nothing new at the colleges.

“The campuses have been collaborating almost as long as they have existed, sharing one thing or another,” said Neil Abraham, executive director of Five Colleges Inc. “The consortium is a separate corporation, founded in 1965, but that’s not when collaboration started. There were major collaborative efforts prior to that, ranging from intercampus buses to students being able to take courses at each other’s campus to library purchasing collaboratives.”

The organization began life as Four Colleges Inc. — Hampshire College would be chartered a year later, spurring a name change — focusing initially on library collaboration and course cross-registration among the campuses. At first, Abraham said, the college presidents assigned faculty members to the consortium, taking time away from the classroom to think about opportunities for collaboration, but the effort eventually evolved into a quasi-independent organization with 38 full-time employees and a $10 million endowment — but still requires heavy involvement from the individual colleges.

“These employees help grease the collaborative endeavors,” Abraham said, “but there’s far more energy put in by people employed by the campuses than even those 38 who work for the consortium enterprise.” 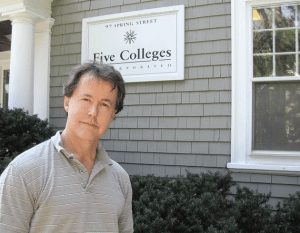 Kevin Kennedy says the economic impact of the Five College Schools Partnership is significant, and far-reaching.

Kevin Kennedy, communications director for Five Colleges Inc., said that “it’s important to keep in mind the tremendous value our member campuses themselves receive by collaborating.” He cited several examples, including:

• Nearly 40 joint faculty appointments, individuals who teach on multiple campuses and allow campuses to cover curricular areas that they might not otherwise be able to afford if they had to pay the full expenses of a tenure-track faculty member;

• A course interchange that allows students to take most courses offered on any member campus at no additional cost. “Thus our campuses are able to offer a richer, more varied curriculum to prospective and current students,” Kennedy said, noting that almost 6,000 courses are taken through the interchange each year;

• Open borrowing through the libraries, making 9 million volumes available to students, many more than they could access in one library alone; and

• A combined compliance and risk-management office that saves the four liberal-arts colleges hundreds of thousands of dollars a year.

That’s remarkable, considering the fact that these schools are also in competition with each other, Abraham said.

“Over the years, in the heat of the moment, there have probably been jealousies and competitive juices flowing in equal measure,” he said, but there’s also a shared recognition that some things can be accomplished — or, at least, achieved at a reasonable cost — only by working together.

Take, for example, the Center for the Study of World Languages. Launched by Five Colleges Inc. in 1991, the program coordinates campus offerings in languages beyond the 15 or so commonly taught at the schools — 41 additional languages and dialects, in fact, not available at any of the colleges, from Afrikaans, Tagalog, and Zulu to Creole, Mongolian, and Xhosa.

“The interest level is too small for any college to hire a faculty member, but our center has developed curricula for students to have opportunities to study these languages,” Abraham said.

“Often, there’s a minimum cost to do something, such as a full-time salary,” he went on, but not enough interest on one campus to justify that salary. By creating and funding a program to meet that need, the consortium creates economies of scale. “Sometimes the best way to do things is to build larger communities where otherwise they would be painfully small, and that’s good for both faculty members and students.”

A similar program is the Five College Center for East Asian Studies, founded in 1976 and based at Smith. “This program is intended to improve how East Asian cultures are taught in our region’s middle and secondary schools,” Kennedy said, and does so by maintaining a resource library, publishing a monthly e-newsletter, and, most notably, conducting seminars, institutes, conferences, and workshops for college and pre-college educators.

The consortium also provides benefits to the community beyond the five colleges, he said. Take, for example, the Five College Schools Partnership, which has for several decades provided professional-development opportunities to K-12 teachers across the Pioneer Valley by pairing them with college faculty for real-world learning experiences.

“The Schools Partnership has led field trips to South Africa and Asia, to Civil War battlefields and Civil Rights battlegrounds,” Kennedy noted. “The program just completed a three-week institute on the Native Americans of New England that brought classroom teachers from as far afield as American Samoa — which I think is about as far afield as one can be and still be in America.”

The economic impact of the Schools Partnership is significant, Kennedy noted; in fact, the program has attracted some $6 million in funding over the years, which is mainly used to pay local teachers to participate in these activities.

Speaking of financials, each college contributes $1 million annually, and together, they provide another $1.4 million to fund the 40 joint faculty appointments. Five Colleges Inc. also takes in an additional $2 million in external grants each year, and typically spends close to $600,000 from its endowment, bringing its annual cash outlay to around $9 million.

In its annual report, the consortium’s board of directors praised the value proposition of the organization. “Through collaboration and cooperation, there are greater academic and intellectual opportunities for students and faculty members than could be offered at any single campus, greater efficiency in operations and administration, and greater opportunities for innovation. We should take advantage of these opportunities while remaining mindful and respectful of the differences that create the separate identity of each campus.”

As higher-education budgets come under increasing pressure, the board noted, the advantages of collaboration are more apparent than ever. “Five Colleges Inc. has a leadership role to play in demonstrating a model for higher education that is both pedagogically and financially sustainable.”

Because taking courses across campuses has become so popular at the colleges, the consortium had to come up with a strategy to transport students who don’t own cars. To that end, it has forged a relationship with the Pioneer Valley Transit Authority to facilitate that, Abraham said.

“For awhile, we had a private express bus service in the ’90s,” he explained. “A few years after the PVTA formed, we negotiated with them, and now we provide the additional funding needed for them to run buses frequently enough so there would be better regional transport that met the needs of students to get reasonably quickly from one campus to another.”

That partnership — and its promotion of public transit — is one example of how Five Colleges Inc. supports sustainability efforts on the campuses. In fact, that was the theme of the consortium’s efforts last year, with the colleges encouraged to contribute in various ways. To wit:

• Hampshire College formalized its Sustainability Initiative, exploring opportunities for change in all aspects of campus life, and initiated the Food, Farm, and Sustainability Institute as a summer program for students;

• Mount Holyoke College established five environmental indicators to measure energy use, greenhouse-gas emissions, recycling rate, campus land use, and stormwater management, which will be presented to the trustees annually;

• Smith College unveiled the Building Dashboard, an interactive technology that enables students, faculty members, and alumni to view, from any computer, the level of energy and water use in campus houses and buildings; and

Other consortium initiatives are technology-related, such as the Five College Fiber Optic Network, financed by all five campuses and coordinated through Five Colleges Inc. Fifty-four miles long, reaching from Springfield up around the campuses and back down, the project was completed in 2007 at a cost of just under $4 million.

There are economic benefits to the initiative, Abraham said. In addition to providing several towns in the Pioneer Valley with high-speed access, Five Colleges Inc. recently signed contracts with Cooley Dickinson Hospital to provide Internet access to two of its facilities, and with Crocker Communications to provide access to some of its clients, including HitPoint Studios, the game company that recently moved to Amherst. “We have a little subsidiary company that leases the fiber we don’t need to others,” he explained.

Meanwhile, even in today’s increasingly wired — and wireless — world, the colleges’ library collaboration remains just as important as ever, emphasizing the continuing value of books on paper.

That applies not only to books, but to academic journals. “Professional journals are now available electronically, so people can find the latest and earlier research on their computers, but it’s nice to keep a print copy in case the electronic copy has a bad photograph or you need a higher-resolution version of something.”

Five Colleges Inc. has its hands in many other initiatives, from Museums10 — a marketing and programming partnership among the art museums at the colleges and five other regional museums — to multi-cultural initiatives and mentoring programs.

Abraham cited the instinctive nature of how such programs come to life. They often begin, he noted, with one or more people saying, “boy, if we had a little help we could do better.”

As he told BusinessWest, “many of these things happen from that level of interest, rather than from some visionary saying, ‘there ought to be a program; let’s do this.’ Instead, it comes from people who want it and will put some sweat equity into making it happen. ‘Organic’ is the right word for how it all comes about.”

Area Hospitality Venues Prepare for the Arrival of MGM