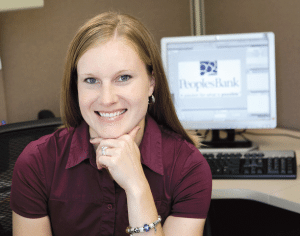 Considering that banking a generation ago always involved visiting a branch — or at least an ATM — it says something that even logging on to a Web site may be too slow for some customers.
But when PeoplesBank added text banking to its growing stable of online and mobile services, it established a new standard for speed.
“It’s pretty quick and efficient,” said Karen Buell, the institution’s Internet branch manager. “You don’t have to call or anything like that, and it’s faster than a browser; if you want a quick balance check, you don’t have to log on.”
To use the option, customers can text a short code — just a few characters — to the bank to access balances, transaction history, and other information immediately. Its functionality may be limited compared to the bank’s other remote-banking services, but Buell said it’s a logical next step for customers on the go needing quick information.
“PeoplesBank has been a leader in mobile banking since 2008, since we introduced our first mobile app, one of the first in the country,” she told BusinessWest. “A lot has changed since then. We try to continue to innovate as technology changes and advances.”
For example, “we have a mobile banking app that will work for any platform — iPhone, Android, BlackBerry,” she said. “We also have a mobile browser which allows you to have the mobile-banking experience from any phone that has an Internet plan, so you don’t have to download the app.”
To develop these offerings, the bank partnered more than a decade ago with Online Resources Corp. (ORCC), which provides Web- and phone-based financial services, electronic payments, and marketing services to financial institutions. “PeoplesBank and Online Resources have been working together for more than 12 years. We started with online banking, then merged into mobile solutions,” said Lori Mark, ORCC’s director of Product Management.
The company estimates that the total number of mobile-banking users in the U.S. will grow from 25 million in 2011 to 42 million by the end of 2013 — a surge driven by the continuing uptick in smartphone adoption, a wider range of modes (mobile apps, text banking, etc.) appealing to a wider range of customers, and ever-improving usability. In addition, according to the Forrester Research Mobile Banking Forecast 2012-2017, 47% of all adults online in the U.S. will be using mobile banking by 2017.
The shift is evident locally, Buell noted. “We continue to see great increases. Browser sessions are going up about 5% month over month; people are logging in to check their balances, transfer money, and pay bills. Personally, I like it; when a bill comes, I pay online, and I’m good to go.
“We’re seeing huge increases in mobile visits to our Web site,” she added. “In the second quarter of this year, mobile devices were 14% of our total Web site volume. We know that there’s demand for it, and people are using it.”

Addressing Concerns
Buell said she recently attended a conference in San Francisco on mobile banking and e-commerce. There, the American Bankers Assoc. presented poll results showing that increasing numbers of people plan to adopt mobile banking if they haven’t done so already; the biggest percentage increase is in the 18-34 age group, followed by the 35-49 crowd.
“We know that Generation Y and Generation X are searching for this technology, and they want to do things on the go,” she told BusinessWest. “That’s being confirmed nationally.”
Some potential users might be put off at first by wireless transactions, worried about the security of their data, but Mark said those anxieties are baseless.
“Financial institutions, just because of how highly regulated they are, tend to be very security-conscious, and so are we,” she said. “We have the same parameters, and we take a lot of time educating our client base about security from hackers. We do what we can to allay those fears.”
Breaking down that trust barrier is key, Buell added.
“When they trust it, they embrace it,” she said. “Out of all our online customers, 25% to 30% are using mobile banking. I think, if you’re already comfortable doing something online or electronically, mobile banking becomes just another way to do transactions electronically.”
She conceded that many customers, particularly of the older generations, prefer to bank only in physical branches, “but if you’ve already embraced the technology, mobile is just another step. There don’t seem to be any barriers.”
Mark said the numbers of users across all platforms — browser, app, and text — continue to grow. “On our side, the smartphone usage is where we’ve seen the growth,” she noted. “Today, 6% of all Internet banking activity comes from mobile devices, and it’s increasing on a daily basis, with the vast majority of that usage coming from iPhones and Androids.”
Buell said PeoplesBank, where the mobile-user percentage is even higher, markets its high-tech banking options through its Web site — a logical place to attract customers who are already comfortable online, many of whom are happy not using brick-and-mortar branches at all.
“We’ve also done a lot of online advertising, Facebook and Twitter posts — and we had a billboard recently, just trying to spread the word that, if you’re looking for technology, PeoplesBank has it.”
The numbers back up the demand, as total mobile visits at PeoplesBank in the second quarter of 2012 were up 178% over the same period last year.
“We know customers are using smartphones, which are changing their lives in meaningful ways,” Buell told BusinessWest. “Our commitment is to answer that desire for convenience.” 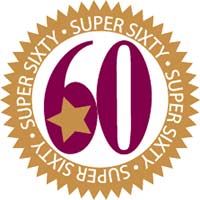