Returning to Its Routes 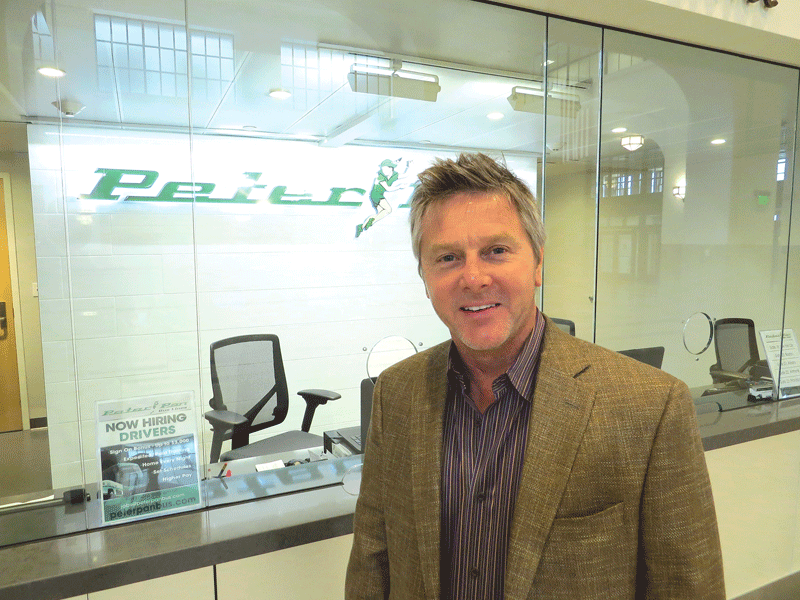 Peter Picknelly says his company stands to benefit in many ways from ending its affiliation with Greyhound.

Back in 1999, Peter Picknelly says, it made perfect sense for Springfield-based Peter Pan to forge a partnership with long-time archrival Greyhound.

The two carriers served most of the same cities in the Northeast, often had terminals right next door to each other, and were waging intense price wars that weren’t benefiting either company.

So a truce was called and an affiliation forged, said Picknelly, president of Peter Pan, adding that the companies’ names and logos soon appeared together at ticket counters, and the carriers shared operations and revenues.

But times, as they inevitably do, change, said Picknelly, and several years ago, it became apparent that ending this partnership made as much as sense as creating it did nearly two decades ago.

It took some time — at least a few years by Picknelly’s count — and legal action amid Peter Pan’s claims it was not being properly compensated by Greyhound, to formally untie the knot. But this desired independence will bring with it a number of benefits, he said, adding that, above all else, it will allow his company to be more responsive to changing needs and tastes among bus travelers.

Elaborating, he said Peter Pan had been hampered by Greyhound’s inability (or unwillingness) to accept paperless tickets, and also by its routes with frequent stops — things today’s time-conscious, technologically savvy bus travelers frown upon.

“The customer will see new Peter Pan ticket counters and new gates in many locations, and they’ll also see much more non-stop service than we had before,” he explained. “Because we were aligned with Greyhound, there were just certain things we couldn’t do, and now we can.”

The partnership between the two companies was due to expire in roughly a decade, he went on, but the long-time and once-again rivals agreed to terminate it much earlier due to those changing times mentioned earlier.

Indeed, the Internet and the declining role of the bus-terminal ticket counter probably played the biggest roles in the mutual decision to turn back the clock — in most, but not all ways — roughly 18 years.

For this issue, BusinessWest talked at length with Picknelly about his company’s regained independence from Greyhound and what it all means. In this course of doing so, he shed some light on a changing business, but one still laden with opportunities for growth.

As he talked with BusinessWest in his soon-to-be-vacated office at the almost-empty Peter Pan terminal across from the recently renovated Union Station, to which the company will be moving, Picknelly said that, overall, the bus industry remains quite healthy.

This despite comparatively lower gas prices that have persisted for the better part of two years now. Picknelly explained that higher gas prices fuel surges in business for ventures such as his, and spikes in prices at the pump like the one that followed Hurricane Harvey-related damage to refineries in Texas result in very noticeable increases in bus-ticket purchases.

“When gas prices go above $3 or just get close like they are now, we see it,” he explained, referring to increased ridership. “When they go above $4 … forget it; people don’t want to take the bus.”

But while gas remains relatively inexpensive, bus travel continues to be a solid option because there are other expenses to consider — tolls and parking, especially in major cities, he explained. There’s also the convenience factor; with most all buses now equipped with wi-fi, professionals can work while they travel, and many are choosing to do so.

The popularity of bus travel comes with heightened competition, however, said Picknelly, noting that there a number of carriers in Peter Pan’s operating area — the Northeast, from Washington, D.C. to New England.

Still, the biggest competition comes from the automobile, he told BusinessWest, adding that a large percentage of his customers own one and need to be convinced to leave it in the garage when it’s practical to do so and take the bus instead. 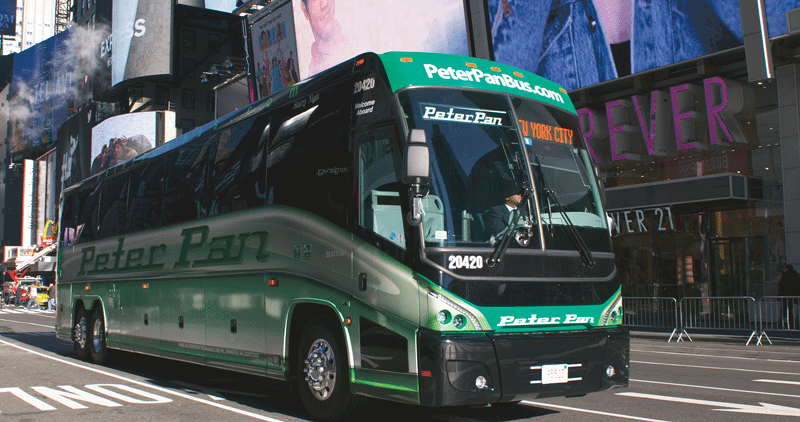 Peter Picknelly says that, by regaining its independence from Greyhound, Peter Pan can give customers more of what they want and need.

And this observation leads him back to Peter Pan’s breakup with Greyhound. That split ultimately helps his company, and his buses, better compete with the car, he explained, by ultimately making bus travel less expensive, more convenient, and less time-consuming.

“I wake up every morning, and my job is to get people out of their car to take public transportation,” he said, adding that he can better succeed in this basic mission without some of the restrictions that resulted from the Greyhound affiliation.’

To further explain, Picknelly first talked about the way things were, before quickly moving on to why the picture needed to change.

“Our companies have grown apart; while the industry has changed, so has Peter Pan, and so has Greyhound,” he explained. “Since our alliance was formed, Greyhound has been bought and sold twice, it’s no longer an American company — it’s owned by a British conglomerate — and decisions are made in the U.K. They’re a very different company and very different to deal with.

“And their business model is very different,” he went on. “Their focus is on long-distance travel, and they make many stops en route; they’re interested in carrying people from Boston to Florida, and we don’t do that.”

Looking ahead, Picknelly said that he believes Peter Pan is well-positioned for a return to how things were in 1998, and that’s one of the big reasons why an end to the affiliation with Greyhound came about.

Indeed, he listed everything from what amounts to a lowest-price guarantee to those non-stop routes he mentioned, to the increasingly paperless nature of the company, to the rewards program it recently started called Peter Pan Perks.

“Greyhound, because it’s so big, and because it focuses on long-distance routes, required people to print a ticket,” he explained. “We’ve had technology for two years now where you can buy a ticket on your mobile device, just show the driver your phone, and get on the bus. We were not able to do that with our alliance with Greyhound; now, we’re 100% paperless.”

Looking Down the Road

Summing up the changing picture, Picknelly said the secret to the success of the bus industry was quite simple — frequency of service and low fares.

Those are the keys to prevailing over what remains this sector’s biggest competition — the car.

Splitting from Greyhound will better position the company to prevail in this competition, he said, adding that Peter Pan is returning to its roots, and its routes, and will be the better for it.