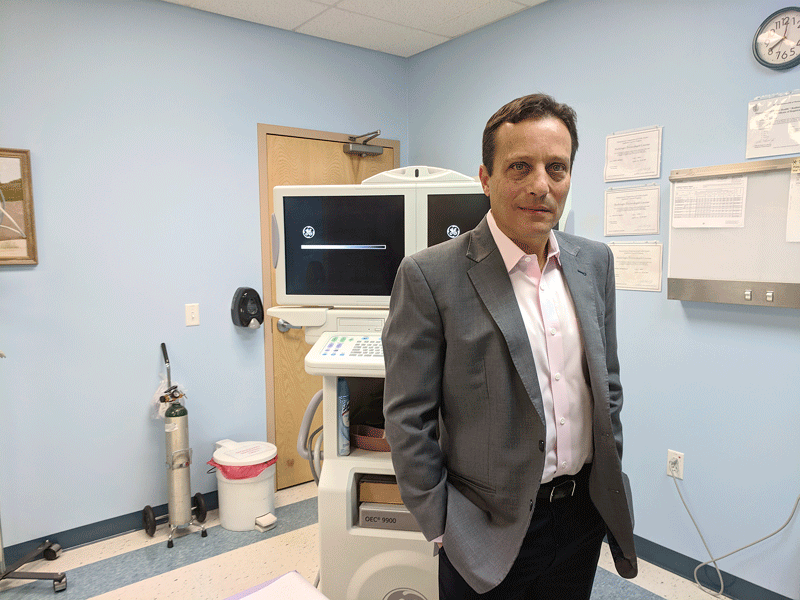 No one is totally immune from a sports injury, from kids on the playground to serious college athletes to ‘weekend warriors’ in middle age. Treating those injuries — and helping reduce the risk of sustaining them — is one of the key niches of Pioneer Spine & Sports Physicians, which has been helping patients return to full function for more than a quarter-century.

No one is totally immune from a sports injury, from kids on the playground to serious college athletes to ‘weekend warriors’ in middle age. Treating those injuries — and helping reduce the risk of sustaining them — is one of the key niches of Pioneer Spine & Sports Physicians, which has been helping patients return to full function for more than a quarter-century.

The first weeks of spring — not spring in name only, like the bouts of snow and 20-degree weather that dotted late March and early April this year, but actual spring weather — typically send weekend warriors, after a long winter indoors, scurrying for their golf clubs and tennis rackets.

And sometimes, they’re a little too enthusiastic.

“We see a lot of that this time of year — golfers getting the clubs out, only to develop back pain. But we also see hockey players from the over-40 league come in with all kinds of injuries,” said Dr. Scott Cooper, one of the managing partners of Pioneer Spine and Sports Physicians (PSSP), the largest private physiatry practice in the Northeast.

“I had one guy who was probably in his mid-50s, and he had recurrent tennis elbow, and I could not get him to stay off the court,” Cooper told BusinessWest. “I treated him for probably six months for tennis elbow, and I don’t think he ever missed a match — whereas, if he was on a team, I could tell his coach, and his coach would say, ‘you’re going to sit out two weeks until this thing clears up.’ Sometimes the weekend warriors can be determined.”

Cooper and his team should know, seeing a broad range of patients every day, from high-school and college athletes nursing knee and shoulder injuries to the inpatient clients PSSP manages in acute-care settings like Weldon Rehabilitation Hospital and Bronson Rehabilitation, recovering from spinal-cord injuries, neurologic conditions, and amputations.

Physiatry, also known as physical medicine and rehabilitation, is a specific type of practice, he explained, but one with a wide range of applications.

“One of the nice things about physiatry is it’s a very broad specialty, and one of our primary goals is to provide state-of-the-art care in all facets of physiatry,” Cooper explained.

That includes the acute rehab setting at Weldon and Bronson, where Pioneer treats people who have conditions that cause a loss of function, so they can’t return home, but no longer need to be in a medical/surgical unit of the hospital.

“These are people who have had strokes, for example, or spinal-cord injuries or head injuries or complex medical conditions or amputations or other neurologic conditions like multiple sclerosis or ALS — things that cause them to lose function, but they’re now medically stable so they can tolerate rehabilitation.

“We manage those patients, and we’re also involved in pain management, both acute pain and chronic pain, in all our offices,” he added, adding that the practice’s physiatrists also deal with spinal conditions, back pain, herniated disks, pinched nerves, and much more. “We have procedure suites in most of our offices where we can do X-ray guided procedures on people’s spinal conditions, and we are also involved with the Surgery Center of New England; we do procedures there that are not office-based, things that are a little bit more invasive and require anesthesia.”

In short, it’s a one-stop shop for a host of conditions, with one goal in mind — to return patients to the highest function possible — in both their work and play.

That ‘play’ factor — sports medicine — is a niche PSSP is well-known for, and around 90% of sports injuries require no surgery at all, Cooper noted.

“If they do require surgical treatment, we work closely with some of the orthopedists in the area who provide those services. But for the other conditions, we’re able to treat them very effectively, and we do that with a lot of recreational athletes, weekend warriors, and we also work with several of the high schools in the area.” 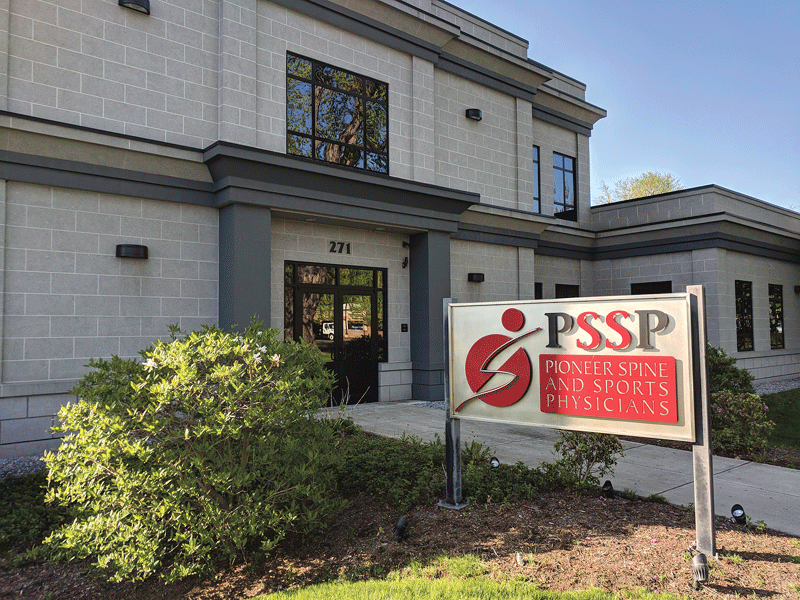 PSSP’s West Springfield location is one of seven offices spanning the Pioneer Valley from East Longmeadow to Brattleboro.

Pioneer also provides team doctors for area colleges including Springfield College, American International College, and Westfield State University, both during and between games.

“For example, hockey and football are the two main ones where they need to have someone on the sidelines according to the rules of their conference, so we provide game coverage in case of an injury during the game,” he explained. Meanwhile, if an athlete is injured in practice, they’re seen in a PSSP office as soon as possible.

“We recognize that one tenet of physiatry is quick return to function,” he said. “So we focus on getting athletes in quickly, diagnosing their condition, treating them, and returning them to the field as quickly as is safe.”

They take the same approach to occupational medicine, working with client businesses — Pioneer has a therapist at MassMutual full-time, for example — on job-site injury prevention and treatment. “We focus on them just the same way we focus on athletes — get them in quickly, diagnose their condition, determine what they can and can’t do in a rapid manner, and treat them comprehensively so they can return to full function.”

While about 70% of all occupational injuries involve the spine, that’s not the case with athletes, Cooper noted. “They have a whole different set of issues. The majority of what we see with athletes involve the knee or the shoulder. And most of those we treat non-operatively. We establish a diagnosis, and if that diagnosis requires a surgical evaluation, we facilitate that, and the surgeons we work with are very accommodating and allow us to get that done very quickly.”

Beyond treatment, though, the team at Pioneer emphasizes prevention. As an example, its physical therapists attended an educational program, developed at Syracuse University, that works to prevent ACL injuries in female athletes, who have a much higher predilection to those injuries than men.

“It’s almost an epidemic,” Cooper said. “Some of the reasons are unclear, but female soccer players and lacrosse players, will come in with ACL injuries, and once you have that kind of injury, it can be devastating, and it generally does require surgery, and requires a long course of rehabilitation.

“So this program has been shown to prevent those injuries,” he went on, explaining that Pioneer’s PTs were certified through the week-long course to teach a group of specific exercises to area sports teams, who come in during the preseason for a week of intensive training, and then continue on a regular basis. The exercises focus on stabilizing the knee and have been shown to prevent injuries.

“That’s one way we try to head off injuries and reduce their likelihood,” he added. “Unfortunately, there’s no way to eliminate them.”

That goes for young athletes and older weekend warriors, who often arrive at PSSP with a combination of a sports injury and something more degenerative, such as an arthritic condition.

“It’s something they can normally get by with, but if somebody with an arthritic shoulder is doing OK, but he goes and plays some tennis, now he’s got a rotator-cuff problem. The springtime is definitely a big time for those types of injury, but we see them year-round. And sometimes they can be the hardest to treat because these people are very determined to get back out there.”

“We’re definitely seeing an older population that is increasingly active, but we encourage that; we want our patients to be active. There’s good data in the medical community that one of the ways to increase longevity and reduce morbidity in the population as a whole is to have an active lifestyle,” he told BusinessWest, adding that one of the mottos in his profession is that “physiatry adds years to life, and life to years.”

“That’s the idea — we want people to stay active, and it almost doesn’t matter what activity; we want them to engage in exercise, and when they do that, they may encounter some injuries and have some problems, and we’re here to address that.”

Because injuries are often an inevitable speed bump in an active lifestyle, he went on, it’s encouraging that treatments have evolved to allow people to return to full activity much sooner than before.

“Injuries that once may have been considered incompatible with continued competition, we now see as being treatable — and treatable with less-invasive means,” he said. “That can be anything from tendinitis to things like arthritis. In fact, arthritis of the knees is something that used to be, ‘you can take Advil, or you can have a knee replacement’; there wasn’t a whole lot else you could do for it.”

Now, however, physiatrists may tackle the issue with anything from orthotics to new types of bracing; from new exercise methods to injections that go far beyond what traditional cortisone could achieve. “So there are definitely more options to treat those conditions with different means that don’t necessaily require surgery, and allow people to be more active.”

It helps, he said, that Pioneer provides a comprehensive, multi-disciplinary, holistic model of care, where physiatrists, physical therapists, and other team members work together and consult with each other on troublesome conditions. If a patient with a spine injury isn’t progressing quickly enough or has too much pain, the providers aren’t afraid to work together to find a solution.

“Basically, anything that’s needed to treat the conditions we treat, we have under one roof,” Cooper said. “We have specialized nerve testing, guys who focus on different areas … we have all kinds of talent and skill to bear.

“I think that really serves to benefit the patient,” he went on, “because they’re not just getting one doctor and one opinion; they’re getting a team approach. I think that is unusual in a private-practice setting, and I think that’s one of the main reasons we’ve been so successful.”

When asked what he enjoys about his job, Cooper paused for a moment and smiled.

“We think we have the best specialty in the world,” he said. “Whether I’m treating an 80-year-old patient with a stroke or an amputation or I’m treating a 16-year-old with a sports injury, I’m working with people who want to be here, who want to be treated, who have definite goals. And it’s very satisfying when they reach those goals.”