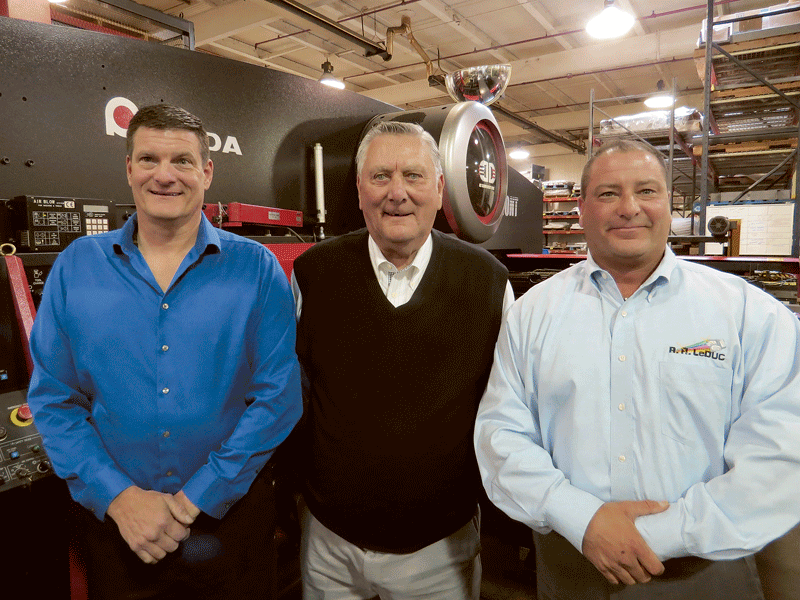 Bob LeDuc, seen here with sons Kurt, left, and Eric, started in a chicken coop and has recorded steady growth ever since.

Bob Leduc says that, in many respects, there’s been a world of change since he affixed his last name to a sheet-metal fabrication company a half-century or so ago.

After all, he got his start in a 20-by-40-foot chicken coop in his backyard, taking some odd jobs and essentially moonlighting to help feed his growing family. Today, the venture he launched, RR LeDuc Corp., is in a state-of-the-art facility on Bobala Road in Holyoke near the West Springfield, and he has established clients ranging from Lockheed Martin to IBM to Whalley Computer Associates. He also has about 50 people working for him, including two of his sons, Eric and Kurt, both serving in vice presidents’ roles.

But looking at things another way, things really haven’t changed a whole lot since the photo on display in the company’s conference room was taken, the one with Bob sporting decidedly early ’70s clothing and a hairstyle to match, an image he finds almost cringeworthy today.

For starters, the 81-year-old not only comes to work every day, he is remarkably hands-on and involved in seemingly everything taking place at the plant — just as he did when he was by himself in the chicken coop, when that assignment was much easier.

More importantly, he noted, business is still being done just like it was back then, with a laser focus on the customer, on being flexible and responsive, and on not only meeting but exceeding expectations, an operating mindset that has created a steady growth curve over five decades.

“One of the keys to staying in business this long is really knowing your customer and partnering with them to meet their needs,” he said while summing up what amounts to his success formula.

Overall, the past 50 years have been marked by evolution and expansion. Indeed, the company that started by fabricating and installing HVAC ductwork and catwalks in Holyoke’s paper and textile mills — usually on weekends when the machines were quiet — now produces a wide range of metal enclosures and other products from a host of business sectors, including defense, communications, medical, electronics, and many others.

“All the cool stuff is on the inside, but we make the skin,” said Eric LeDuc, adding that the company fabricates this skin (enclosures) for everything from computers to ATM machines to portable generators.

For this issue and its focus on manufacturing, BusinessWest talked with the LeDucs on the occasion of their silver anniversary about where this company’s been, and where these two generations of leaders want it to go.

There was a party on the front lawn featuring a jazz band and catering by the Log Cabin. The invitation list included customers, vendors, a few elected officials, and employees past and present.

Those gathered were marking a half-century in business, a considerable feat in its own right, but they were really celebrating all it took to reach that milestone — entrepreneurship, evolution, persistence, innovation, and teamwork.

Those qualities came through clearly as the LeDucs collectively — one would often pick up where the other left off and fill in needed information — related the story of their first half-century in business.

The chicken coop gets brought up often, because it provides a colorful, down-to-earth start to the story. But it is only the first chapter.

Actually, we probably need to go back a little further, to the Holyoke Trade School, where LeDuc, concentrating on sheet metal, graduated in 1954. He served a four-year apprenticeship with the E.H. Friedrich Co., worked there for a few years, and then worked for a few other firms, including one in New Haven, which he served as supervisor, that specialized in HVAC ductwork.

He built a house in Chicopee, and on the lot was a World War II chicken coop, he told BusinessWest, adding that soon thereafter he began that aforementioned moonlighting.

“I bought some sheet-metal-bending equipment and shearing and welding equipment as well,” he recalled. “After eight hours of work, I’d come home, eat supper, and work until Jack Parr came on.” (That would be 11:30 p.m., for those too young to know that Parr preceded Johnny Carson as host of the Tonight Show).

In that chicken coop, the elder LeDuc mostly handled the HVAC ductwork he had become versed in, and as his workload became more steady, he eventually quit his day job — and soon flew the chicken coop — and moved into a sub-basement in a building on Sargeant Street.

His client list was dominated by the paper and textile mills surrounding him, and for those companies, LeDuc fabricated ductwork and also handled so-called trim work on the paper machines. He soon gained a reputation for quality work and flexibility that enabled him to stay busy.

“I would work for a couple of hours, change clothes, and go out and make sales calls,” he told BusinessWest. “I remember one customer saying, ‘what can you do for us that the people working for us now can’t do?’ I said ‘I can work for straight time on Saturdays and Sundays.’ That raised some eyebrows, but most of their machines were down on the weekend, so that’s when they needed someone.”

The work would evolve over time, involving a shift to working with stainless steel, which required investments in new equipment, and new assignments such as catwalks, guards for machinery, and exhaust hoods.

As the mills closed down or moved south in the ’70s and ’80s, the LeDuc company had to reinvent itself, said Eric, who, like Kurt, essentially grew up in the company, starting on the shop floor and working his way up. And it did, becoming a precision sheet-metal fabricator, essentially a contract manufacturer serving a wide range of clients.

There would be a move from Sargeant Street to Samosett Street in the Flats area, several expansions of the location there, and then a major investment in a new, 60,000-square-foot building on Bobala Road.

In the early ’90s, the company was approached by Atlas Copco about adding powder coating of the casings (skin) LeDuc was manufacturing for its portable generators to its roster of services.

“There was no one in this country that was doing it at that time,” Bob LeDuc recalled, adding that powder coating has become a strong component of the company’s overall roster of services.

Today, the company has a diverse portfolio of clients and an equally diverse portfolio of products it produces for them. And one of the keys to both is a tradition of continually investing in state-of-the-art technology, said Eric, noting that the company has made great strides in automated, or lights-out, manufacturing, as it’s called, because it can be done 24/7, or when the lights are out, at least for employees.

Recent additions to the shop floor, complete with many letters and numbers in their names, include:

• The Astro 100NT automated bending robot, which, as name suggests, is the answer for forming parts unassisted (automated tool changing allows the sequencing of multiple programs);

• The FO 3015NT 4,000-watt laser, capable of cutting steel and aluminum in a wide range of thicknesses; and

• The EM3610NT CNC punch press, which, along with lights-out manufacturing, allows mass production of high-quality parts.

There are many other pieces of equipment on the floor, said Eric, adding that all those numbers and letters add up to flexibility and responsiveness, qualities that have enabled the company to continue to grow its client list over the years.

There are a few other artifacts in the company’s conference room, including the time-worn ‘RR LeDuc’ sign that hung on the property on Sargeant Street.

It stands as another indicator of just how much things have changed for this company since Bob LeDuc would come back in from the chicken coop in time to watch Jack Parr.

But equally important is what hasn’t changed in all that time — the focus on the customer and forming a partnership with it to meet goals and needs.

That focus has enabled the company to shape opportunities in the same way that it has shaped metal. 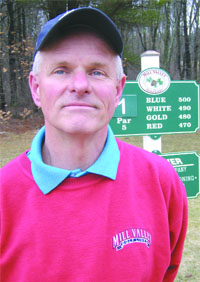