Jeremiah Beaudry Colors in a Successful Story of Entrepreneurship 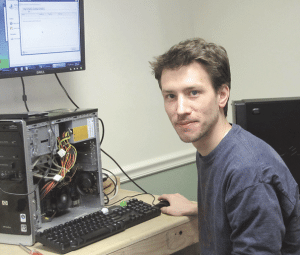 Jeremiah Beaudry took his youthful passion for computer repair and turned it into a successful business.

By the time Jeremiah Beaudry was 10 years old, he was building computers.
By the time he was 14, he was running his uncle’s computer repair shop, and by the time he turned 15, he had started his own computer business.
Call him a prodigy. Call him a wunderkind. The bottom line is, the owner of Bloo Solutions in Chicopee knew exactly what he wanted to do in life, and was very good at it from a young age.
“My uncle, Len Beaudry, had his own computer shop in Leominster called Computer HMO,” Beaudry told BusinessWest. “He would drop off broken computers at our house, and my Dad would put them in the basement, and I would go down there and play with them. They were like Lego sets to me.”
When he was 13, Beaudry worked summers repairing computers in his uncle’s shop. The next summer, he ran the business while Len was away. Beaudry mostly taught himself about computers, as he scoured the Internet for instructional videos and any other resources he could find.
“I broke things constantly,” he said. “I’d spend days figuring out what I did wrong. I learned by getting my hands on it and why I did what I did.”
At 15, he opened his business, initially called CBOS Computers, out of his basement at home.
“It was a silly name; it stood for Can’t Beat Our Service,” Beaudry said with a chuckle.
Beaudry, now 30, recently sat in his small computer shop on Grattan Street in Chicopee, surrounded by computers in various stages of assembly and repair, to talk about his business and his formula for success. He was relaxed in blue jeans and a T-shirt, and takes a genuine interest in other people, asking a visitor how he got started in his business.
The choice of the name Bloo Solutions, with the unconventional spelling of the word ‘blue,’ was simple. Beaudry loves the color and designed many websites using different variations of blue. When he went to register the domain name, he found another company called Blue Solutions existed, so he simply changed the spelling.
The venture has carved out a niche as a resource for small businesses throughout the region seeking information-technology solutions. Beaudry provides a wide range of services, including website design, repairs and troubleshooting, virus removal, network and security setup, and more.
He has also offered advice to clients on the right computer or entertainment center to buy, and even on how best to market their products or services.
“What I like most is solving problems for people,” Beaudry explained. “I like to know I’m doing something to make a positive difference in somebody’s business.”

Web of Intrigue
A native of South Hadley, Beaudry graduated from South Hadley High School in 2001. Before earning that diploma, though, he was earning a salary with his own business, one focused mostly on repairing computers owned by clients of his father, an independent financial manager.
“I learned a lot … they were patient with me,” he said, adding that having a father who worked for himself had a big influence on him. “Having flexibility is more important than having stability sometimes.”
In the beginning, Beaudry would make cold calls to area business owners trying to  grow his client roster. In 1999, he scored his first big website-design job when he was hired by Tekoa Country Club in Westfield.
“I got a $4,000 contract to do their website,” he said. “It was unbelievable to me. Since then, I’ve never advertised. Business has been all word of mouth. It’s grown organically.”
Beaudry took a break from the business to attend Bentley College in Waltham. While at school, he worked at a local Radio Shack, which he hated. Indeed, that experience only reinforced his resolve to work for himself and enjoy both the freedom and responsibilities that come with being an entrepreneur.
“I was working someone else’s schedule,” Beaudry said of his time at Radio Shack. “It was the same thing every day. I wasn’t helping anyone; I was just selling things. I probably lasted there only four to six months.”
Bentley College didn’t take either. Beaudry found a client in Hingham, a retail store called Beauty and Main, that was expanding and needed help with updating its computer system to accommodate the move.
“They expanded from one to eight stores, and my job was to install software in all of their stores all over New England,” Beaudry said. “They were 80% of my revenue. I had a couple of people working for me at the time, helping with that project.”
That’s when Beaudry decided to leave Bentley behind and move back to South Hadley. He worked out of his house for 10 years before getting married and starting a family. Beaudry, his wife Chelsea, and son Daxton, who was born in June, live just over a mile away from his shop.
“Having a home office did the trick for a long time,” he said. “But then you start a family, and the office becomes the baby’s room. Plus, I needed a place to meet clients or where they could drop off their computers.”
Bloo Solutions has been at the Grattan Street location for about three and a half years. Beaudry has one employee, his South Hadley High School friend, Joshua Charland, an IT consultant, and more than 100 clients, about 25 of them steady.
“We try to be a one-stop shop,” Beaudry explained. “We target small businesses. We can be their outsourced IT department; they can come to us with all of their questions.”
Chicopee attorney Robert Lefebvre of Gelinas & Lefebvre has been a client of Bloo Solutions for about 10 years, from the time he met Beaudry through a marketing group. At the time, his four-attorney office needed help replacing equipment and updating its system. Since then, Beaudry has been like the office’s own IT department.
“Jeremiah has provided many services for us,” Lefebvre said. “He’s been phenomenal in helping our practice.”
The services provided by Bloo Solutions to Lefebvre’s law firm have evolved over the years to everything from designing the website to updating equipment; from installing backup systems to online marketing, and more.
“Jeremiah is indispensible,” Lefebvre said. “I’ve referred him to many different clients and businesses, and they’ve gotten the same great results that we have. For what he does, you usually have to hire a larger company that would cost you much more money. He provides a unique service to small companies.”
According to Lefebvre, what really impressed him about Beaudry was his commitment to getting to know how the law firm was run so he could better determine exactly the kind of services it would need.
“He’s reliable,” Lefebvre said. “He would research what other, similar firms are doing on issues involving security, and he would come back with recommendations so he could adequately structure our systems.”
Another Chicopee client, A. Crane Construction, retains Bloo Solutions for several IT projects, including the redesign of the company’s website, social-media marketing, IT solutions, and other work.
“Jeremiah is extremely detail-oriented,” said A.J. Crane, owner of the company. “He’s very serious about his business, which is not a common trait among many young business people. He treats his business like we treat ours. He’s very personable, very respectful.”
If Beaudry doesn’t have the answer, he has other experts he can recommend to do the job, he noted. And he is willing to refer his clients to someone who can help with a problem that is out of his area of expertise.
“He always finds the solution for us, even if it doesn’t make money for him,” Crane said.

Technically Speaking
Beaudry told BusinessWest that he’s diligent about keeping up with the ever-changing high-tech landscape. Computer viruses and other destructive bugs are getting more sophisticated and stealthy, and that keeps him busy educating his clients and installing or updating preventative solutions.
“One of the biggest things we do is to make sure clients’ network and security protocol are consistent so viruses won’t infect their computers,” he said. “It’s important to put protections in place so that, if a virus gets into your system, you won’t have much downtime. Downtime costs money, so we try to minimize it so you’re up and running in hours, not days. Nothing is more vital than having backups to your computer system.”
By providing such solutions, Beaudry has kept his clients from feeling blue — or, in this case, bloo, which has become the color of success. 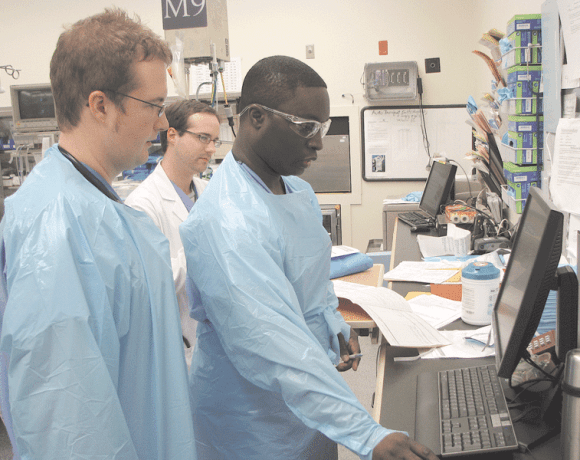 The Law Struggles to Keep Pace with Advancing Technology