‘The Castle’ Focuses on Details That Make a Difference 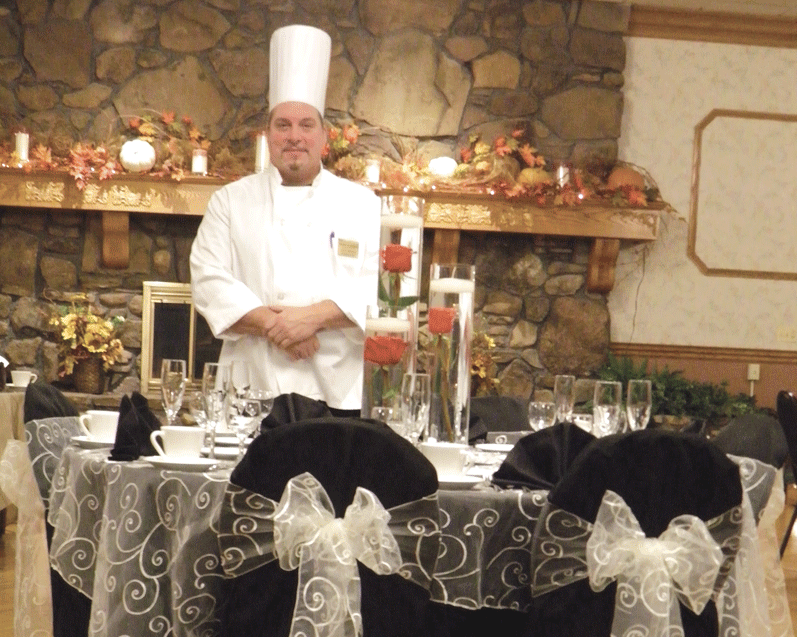 David Sarrasin says he aims to meet the dietary needs of vegans, vegetarians, gluten-free diners, and guests with food allergies.

People who aren’t familiar with Chicopee might be surprised to learn the city, and specifically Memorial Drive, is home to a large castle, complete with two towers and parapets that line the edge of its roof.

Large lanterns on the building cast light into a parking lot with enough space for 400 vehicles, and massive doors open into a 10,000-square-foot Grand Ballroom illuminated by sparkling chandeliers and an enormous stone fireplace that burns brightly throughout every season of the year.

This building, owned by the Fairview Knights of Columbus Council No. 4044, has an interesting history, said the group’s treasurer, Ronald Belair. He noted that what is now known as the Castle of Knights Meeting & Banquet House, which hosts hundreds of functions each year, was once a strip mall that was home to a number of small, but well-known businesses.

But over the past three decades, it has been completely transformed, and today events staged there include chamber of commerce functions, banquets, weddings, bridal showers, baby showers, 16th-birthday parties, quinceañeras, anniversaries, and church functions.

Businesses also use it for meetings that run from a few hours to three or four days. “Our facility has wi-fi connectivity and state-of-the-art audio-visual equipment,” said Belair. “The entire building is on one level and is handicapped-accessible.”

It has become a tradition for many groups to hold their holiday parties there, and they are often booked a year in advance by companies and social-service agencies alike.

“People come back year after year, and we also have five companies that wait until January to hold their Christmas parties,” said Sales Manager Sandi LaFleche, citing a growing trend. She added that Chicopee Savings, the Arbors, Shriners Hospital for Children, and Hulmes Transportation number among the firms that choose the Castle for their annual holiday gatherings.

The Fairview Knights of Columbus established the Castle as a separate corporation 25 years ago, said Belair, and went about creating something that would be unique.

“When it was formed, we wanted it to stand out, so we changed the entire façade of the building — we put turrets at each end of the banquet hall to give it the look of a real castle, and had the roof designed to look like a moat,” he said. “It is a very unique, elegant facility that is lavishly decorated, and we do our best to treat our guests like kings and queens.”

In addition to this unusual setting, he stressed that the castle emphasizes attention to detail and a willingness to go the extra mile to meet client requests.

For example, it’s not unusual for Executive Chef David Sarrasin to prepare gluten-free meals, along with dishes for vegans, vegetarians, and people with celiac disease at a function in which the other guests are all eating the same food.

“Over the past five years, a growing number of people have been diagnosed with food allergies or put on strict diets,” he said. “We are very conscious of taking care of the needs of our guests, and we want people to be able to come to the Castle, enjoy a meal, and not worry about getting sick, so our menu has evolved considerably over the years.”

What visitors to the Castle see today is the result of a long and slow process of evolution, said Belair.

It began when the Fairview K of C purchased the strip mall at 1599 Memorial Dr. 35 years ago. At that time, a large storefront, which had housed a Big Y, was vacant, but the mall contained many other tenants who had leases that had to be honored. They included Giovanni’s Pizza, Dress Barn, Ray’s Hardware, Lewis & Clark Drugstore, Ray’s Barber Shop, and Rip’s Lounge, which was a popular watering hole frequented by those stationed at nearby Westover Air Force Base.

“The K of C purchased the mall to be its home — we moved from a very small facility on Montcalm Street into the space that had been occupied by Big Y, and over time we slowly renovated it to accommodate our own functions,” Belair said, noting that it was the organization’s third move, and after the former supermarket was gutted, two halls and a large kitchen were created in the space.

As the leases expired for neighboring tenants, the K of C slowly took over the empty storefronts, and Lewis & Clark and Rip’s Lounge were converted into a members’ lounge and meeting facility. As more space continued to open, again due to expired leases, the K of C allowed charitable organizations, ranging from its own youth association to Boy Scout and Girl Scout troops, to use it free of charge.

“But as time went on, a growing number of organizations began to contact us because they wanted to host functions in our hall,” he went on. “So the K of C formed a for-profit corporation that we called the Castle. It allowed us to provide services to the general public.”

At that point, the K of C hall was typical of what people would expect to find at a similar organization. “It had been used for our functions, and featured a wagon-wheel chandelier and red carpeting, which were popular at the time. Although it was attractive, we needed to bring it to another level,” said Belair, adding that the Knights wanted to provide an atmosphere that could compete with other banquet facilities. 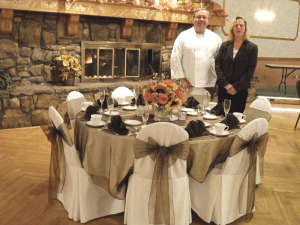 Ronald Belair, with Sandi LaFleche, says the building’s castle design was intended to make it stand out.

So, in addition to changing the façade of the building, an elegant interior with a more formal ambience was designed, which included large, crystal-style chandeliers. Space was also designated and used for offices, bathrooms, and storage and stock areas.

Eight years ago, a second major renovation was completed, which included new carpeting, dance floors, soundproof walls, drapes, and tastefully decorated restrooms that can accommodate up to a dozen people.

The Castle, which leases the space from the K of C, can accommodate groups of 40 to 700 people, and two functions can be held at the same time, thanks to soundproof room dividers.

“We have some of the largest dance floors in Western Mass., and each hall has its own bridal suite, which can also be rented separately for small, corporate meetings,” Belair told BusinessWest. “The rooms are large enough to accommodate live bands, and each hall also has its own stage for entertainers. We also have three large, full-service bars, and groups can choose a cash bar or from a variety of open-bar options.”

Belair said the Castle also boasts its own in-house florist, Flowers by Rebecca. “She is always available to create special items or honor special requests for weddings or wedding parties,” he said. “But our hall is decorated for every season, and we have floral displays on the walls as well as the mantel of the fireplace, which allows clients to save money if they don’t want something custom-tailored for their event.

“We also have a vast array of linen colors and chair covers,” he continued, adding that a full-time sales team, banquet manager, executive chef, and four additional cooks, as well as kitchen staff, make it possible to please every guest.

Sarrasin is known for his artistic creations, which include ice sculptures of swans, enormous baskets, and even a Waterford crystal egg. They take hours to complete, but an equal amount of time is spent preparing unusual international cheese platters and fruit and vegetable crudités, as well as antipastos that are up to 4 ½ feet long.

“We also create rustic displays with different types of bread, cheese, and antipastos in baskets and on platters,” he said. “The presentation of food is very important to us, and people often tell us they have never seen anything like our food displays anywhere except on cruise ships. It’s what I wanted to do — create something to set us apart from everyone else. I wanted to create a ‘wow’ factor because it’s needed in this industry.”

The menu features a vast array of choices, although the main fare is French nouveau cuisine. “We offer buffets with carving and pasta stations as well as sit-down dinners and luncheons, with entrees that range from chicken dishes to beef Wellington, prime rib, and filet mignon, as well as our popular Castle cordon bleu and scrod,” Sarrasin said.

There is also a vegetarian menu, and it is not unusual for the kitchen staff to accommodate special requests, whether it is an ethnic food or a dish normally not on the menu. Ethnic dishes that have been requested and prepared include paella, kapasta, pierogies, and galumpkis.

Generations of people have worked at the Castle, and many started in the kitchen in their teens. Sarrasin said he creates a learning environment that allows his entire staff to work in any aspect of food preparation. “I try to share everything I know, and many employees have taken their experience and the knowledge they have gained here and gone on to become chefs or managers at other facilities.”

Events held there range from joyous to somber, but it is a popular setting for weddings, and LaFleche said about half of the brides who hold their wedding receptions there get married on the premises. “They often set up arches with flowers and have their guests seated in aisles or at tables,” she noted. Other affairs include beer and wine tastings as well as a variety of fund-raisers.

“Because we’re not owned by an individual, we can offer the community a lot at a reasonable cost,” he went on. “We keep our prices modest while providing a superior product, and all of our profits are channeled back into the facility.”

Although the Castle offers many amenities, one thing that makes it different from many other area banquet facilities is that it is governed by a board of directors who are all members of Fairview Knights of Columbus Council #4044.

They generously donate their time to serve on committees connected with the Castle, and the K of C uses it to host its own events, such a Valentine’s Day party and New Year’s Eve celebration, which are open to the public, along with monthly spaghetti suppers. The facility also hosts a free, annual Thanksgiving dinner that provides meals to more than 3,800 needy or lonely people, which earned it the International Family Service Award from the Supreme K of C in San Antonio, Texas last year.

Overall, the venture created more than two decades ago has been heralded as a success, earning recognition and praise from businesses, social groups, and families who return time and time again.

“The combination of a diversity of options, our location, and the consistent, high quality of our food are keys to the Castle,” Belair said. 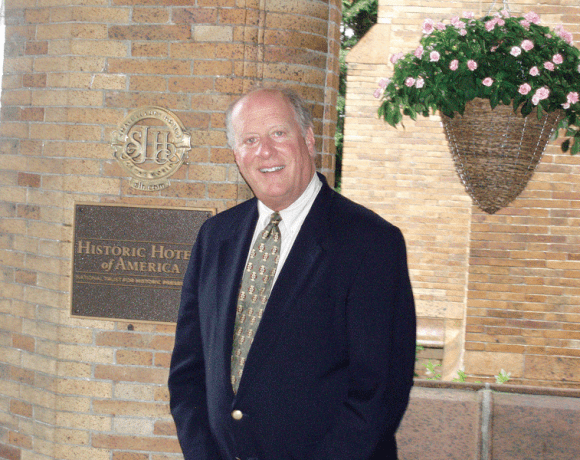 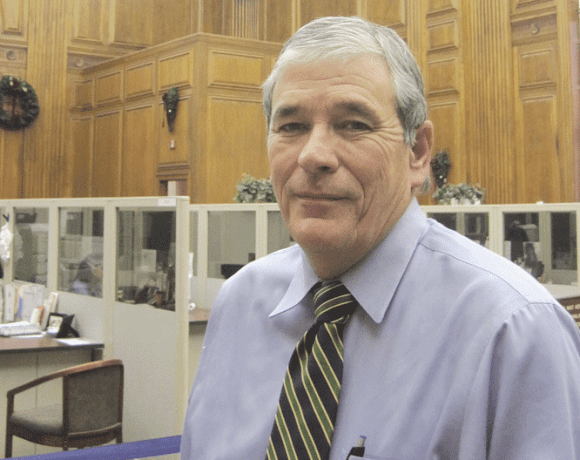