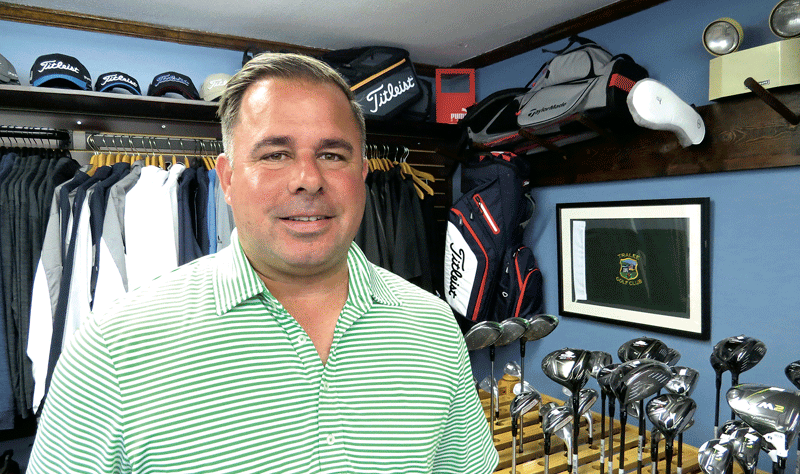 Ryan Hall says his move to the public-course realm is a learning experience that is ongoing.

Ryan Hall acknowledged that he really didn’t know what to expect when he left the posh private-club realm within the broad business of golf, specifically Avon Country Club in Connecticut, for Springfield’s two public courses, or ‘munis,’ as they’re called, this spring.

But in making that dramatic and somewhat unique career course change, he strongly implied — without actually and officially saying it — that the unknown was and is a better bet for him than something he’d for known for pretty much his entire career.

Thus, his move to Franconia Golf Course and Veterans Memorial Golf Course speaks volumes about the state of this game and what Hall sees happening — or not happening — down the road.

In short, the landscape has changed dramatically across the golf spectrum and at private clubs in particular, especially as the Great Recession put a huge dent in discretionary spending such as club memberships.

“The recession really clobbered the private clubs,” Hall told BusinessWest, adding that the past several years have been, in a word, a struggle — to build and maintain membership and bring more people into the game. “And to me, that model is in real trouble.”

Elaborating, Hall said Avon, like most other clubs like it, is “surviving,” a term that could not have been used, or perhaps even imagined, a few decades ago. And he doesn’t really see that landscape changing in any significant way in the years to come, especially amid conjecture that the Millennial generation is unlikely to enthusiastically embrace the country-club life.

So Hall chose to go work in a far different landscape, the daily-fee world of municipal golf courses, where cash is actually exchanged, there are nine-hole rates, and no one really knows who might walk in the pro-shop door.

As he talked with BusinessWest in his small office in the back of the pro shop at Franconia on Dwight Road, Hall noted that, while he didn’t know what to expect at the city’s two courses, what he’s seen and experienced has nonetheless surprised him in many ways.

Elaborating, he said the crowded sheets for tee times, packed leagues, and steady play all seven days of the week have been somewhat inspiring revelations that have left him feeling pretty good about his career decision.

“It really has shocked me how busy this place and Veterans are; Saturday and Sunday morning, the tee sheets are full from 6 o’clock till noon, and during the week, it’s just non-stop,” he said, adding that people are still playing golf, but more of them are likely to be playing public or semi-private courses rather than private clubs.

Still, Hall, like golf pros everywhere and at public courses as well as private operations, knows that these are ultra-challenging times for the game, and business, of golf.

Young people are not embracing it with the enthusiasm of previous generations, and the cost and time involved with playing 18 are considerable obstacles to those thinking about taking it up.

Thus, public-course managers must be creative — a word you never heard in this business years ago but now hear all the time — and also resilient, and laser-focused on providing something not often thought about in golf until this century: value.

Hall takes over Springfield’s courses at a time of lingering controversy. Well, sort of. His predecessor, Kevin Kennedy, was essentially relieved of his duties amid an investigation involving the Internal Revenue Service. An audit undertaken by the city hinted strongly at revenue skimming on Kennedy’s part as well as a distinct lack of institutional oversight on the city’s part.

The latter seems to be a thing of the past, with a number of new policies, procedures, checks, and balances in place. And the former is mostly in the past as well, said Hall, who is firmly focused on the present and future tenses, which are challenging exercises in their own right.

For this issue and its focus on sports and leisure, BusinessWest talked at length with Hall about his move to Springfield’s courses and the public-track world, and also about the state of the business and its prospects for the future.

As noted earlier, Hall, who grew up in Springfield, played both of its municipal courses, and graduated from Cathedral High School, had really only known the private-course world, career-wise, until last March.

Indeed, he cut his teeth at Springfield Country Club, working in the bag room under long-time pro Harry Mattson Jr., and later served as an assistant to Dave DiRico at Crestview Country Club in Agawam before gravitating to Avon in 2001.

In the private sector, we were working so hard the last few years to bring golf to people, to grow the game through junior golf and women’s clubs,” he said. “We had to be so creative and think outside the box to secure these golfers for the future.”

When he later became head pro there, he had a front-row seat, or pro-shop-window view, if you will, to the profound changes that have come to most all private clubs, including exclusive ($25,000 for an initiation fee) clubs like Avon.

“In the private sector, we were working so hard the last few years to bring golf to people, to grow the game through junior golf and women’s clubs,” he said. “We had to be so creative and think outside the box to secure these golfers for the future.”

To get his points across, Hall summoned some numbers.

“When I started as an assistant at Avon, we had 425 members and a waiting list,” he noted, adding that many private clubs were similarly healthy at that point. “At Avon right now … we had a very strong membership drive last year, and they’re still below 300 members and no waiting list.

“And this is Avon,” he went on, accenting that word for a reason. “This is what I view as a protected sort of environment, a very affluent area where you would think that a private club would survive very easily. It’s not to say that they won’t, or aren’t, but it became very, very challenging.”

So much so that Ryan eventually became one of two bidders for the contract to manage Springfield’s courses, a career change he described as a “learning experience,” and one that is very much ongoing.

“I’m learning every day — culturally, it’s definitely much different here,” he said in a classic bit of understatement when asked to explain this career move, something he had to do a lot in the spring and is still doing. “When I learned of the opening, I viewed it as an opportunity to do some different things.”

Despite a late start — mid-April, as opposed to early April or even late March most years — and some wet weather that wiped out a few precious Saturdays in May, both courses are off to a solid start, revenue-wise and otherwise.

“It’s the end of June, and things are very promising,” he said, adding that the volume of play generally picks up once school is out and students and their teachers are looking for ways to fill their summer days.

And, as noted earlier, one of the things Hall has learned since arriving is that the decline in interest in private clubs has in some ways benefited public courses, or at least those that are in good condition, present a solid test, and offer value.

“We’re seeing groups coming up from Connecticut and groups from Eastern Massachusetts,” he said, adding that the condition of the two courses and their low price ($40 for 18 holes and a cart on a weekend) are attractive selling points, and news, in the form of word-of-mouth referrals, travels fast. “And I enjoy that aspect of it; if I see a group come through on a weekend and I don’t know them, I’ll ask where they’re from, and they’ll say ‘we’re from Glastonbury.’

“Price drives things,” he went on. “They hear $40 with a cart and the course is in great shape, they come and they check it out, and then they go tell their buddies. We’re seeing that happening more and more.”

Still, there are serious challenges confronting all those doing business within the broad realm of golf, said Hall, adding that perhaps the biggest of these involves getting more women and young people involved in the game.

Women have become a particularly stern challenge, and for a number of reasons.

“In the private sector, I’ve watched the level of play among women diminish — it’s very challenging,” he explained. “And it comes down to the commitment — there’s the time involved, but also the cost. When it comes to the household budget, where does golf fall? What’s important, and what’s not?”

But there is another factor involved, one that Hall says he and other club pros might be able to do something about: the intimidation factor.

By that, he meant everything from the difficulty of the sport to the number and complexity of the rules.

“There are women who are definitely intimidated by golf,” he explained. “I spoke to the group here at Franconia, and some were really concerned that some of the women weren’t counting all their strokes.

“Let’s not worry so much about their strokes,” he went on. “Let’s get them out there playing; let’s grab hold of them and get them comfortable and willing to continue golf; let’s not worry about the competitiveness of golf.”

Elaborating, he said his experience at Avon showed that some women don’t like the word ‘tournament,’ or the notion that they have to play for something, be it a trophy, money, or whatever.

And that led to one of those creative strokes he talked about, a group he called the ‘no-holers.’

“We had the 9-hole ladies, the 18-hole ladies, and then the no-holers,” he explained. “We would invite them out late in the afternoon, give them a glass of wine and some cheese, and just talk about golf, maybe show them the course and introduce them to it. We were trying to get them off on a different foot than that fear many of them experience.”

While Hall is certainly settled in now at Franconia and Veterans, the learning curve, as he called it, continues.

This was the relative unknown that he chose over the world that he had known since the start of his career.

Thus far, his choice seems like a sound course of action in a business — and a game — where there are challenges around every turn and things can change in a hurry.

And where the phrase ‘going for the green’ is definitely a risk-reward scenario. 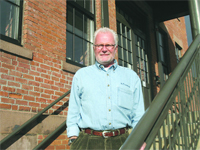