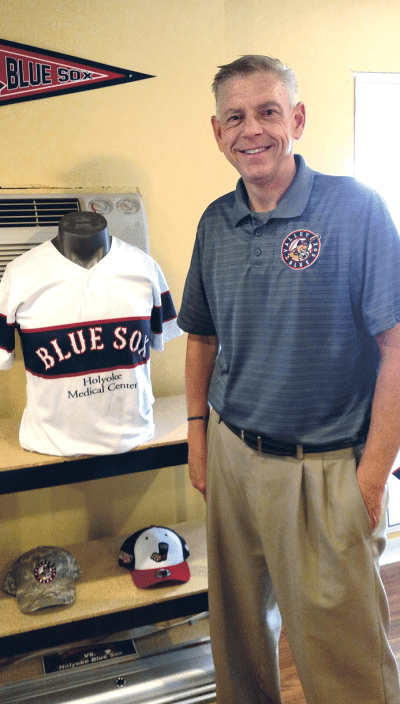 As the region’s only collegiate summer-league baseball team, the Valley Blue Sox are surging both on the field and in the front office, which is celebrating league-topping attendance last year and a growing reputation for on-field success. Those victories didn’t come overnight, but result from both skilled roster building and a recognition that the product should be, above all, affordable and fun.

When Darth Vader or one of his stormtrooper henchmen roam the third-base line, it’s understandable that not every eye is fixed between the white lines of the diamond.

That’s OK, though, in the world of college-level baseball, and particularly the world of the Valley Blue Sox, who have turned MacKenzie Stadium in Holyoke into a bona fide summer destination.

“We have to be reaching out through promotions and engaging people who might not otherwise have interest in the game, but they’ll come out for a fireworks show or to see Star Wars characters,” General Manager Hunter Golden told BusinessWest. “There’s a hook, something other than the game.”

That’s true of minor-league and amateur baseball organizations across the country, a culture known as much for its mascot races and bobblehead giveaways — in short, family fun — as for the product it puts on the field. But the Blue Sox are garnering increasing attention in the New England Collegiate Baseball League (NECBL) for both the crowds it draws, thanks partly to those promotions, and the quality of the play itself, which is turning casual visitors into devoted fans.

It’s a success story that didn’t happen by accident.

This is truly a team that reaches the entire area; we have fans driving down from Northampton, Amherst, and Hadley.”

In fact, team owner Clark Eckhoff, a veteran of minor-league baseball who oversaw the revival of a team in the Great Lakes region before buying the then-Holyoke Blue Sox in 2013, saw potential in this team and its surroundings, and had a vision for how to grow its popularity.

“This is truly a team that reaches the entire area; we have fans driving down from Northampton, Amherst, and Hadley,” he said — not to mention the fact that Springfield itself is the largest metro area in the country lacking professional baseball. Consider the success of the AA-level Hartford Yard Goats, who are selling out most of their tilts, and it’s clear a regional appetite for baseball has long existed. The challenge was to field a product — on field and off — to sate it. 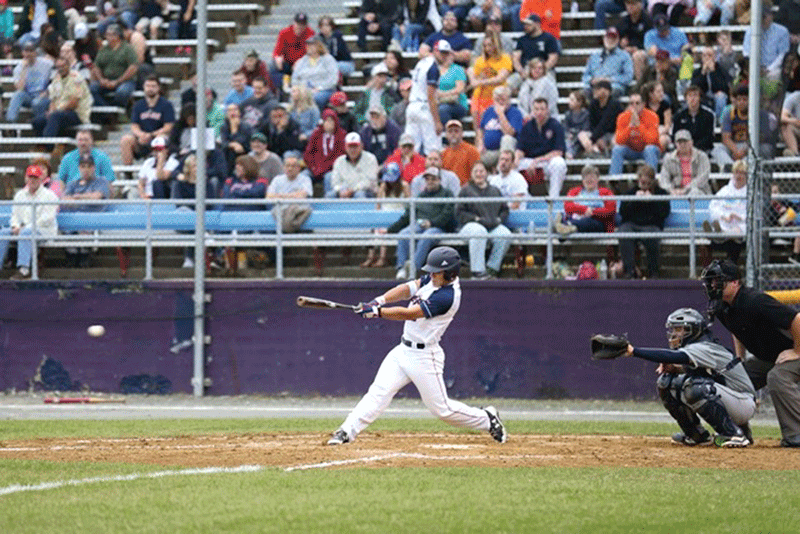 So far, mission accomplished. Canny roster building (more on that later) resulted in a deep playoff run last year, and a hot start in 2017 that included a nine-game winning streak in mid-June. Off the field, the team’s heavy promotional schedule of giveaways and events, plus ramped-up efforts to engage with the community, have turned the Blue Sox into the NECBL’s top draw, ranking 11th nationally among 169 summer collegiate teams in 2016, and besting the turnout of 20 A-level professional teams — and three AA squads — to boot.

“I’ve enjoyed the opportunity to take something literally close to not even existing — based on where the team was trending in 2011 and 2012 — and seeing the fanbase grow,” Eckhoff said. “The majority of these kids will be in A ball in two years, so the quality of baseball is really good, and the other things we do provide a great family experience.

“I love going to Fenway Park,” he added. “It’s the most historic stadium; it’s iconic. But the majority of people can’t afford to go there more than once or twice a summer. Here, tickets are $7 — $5 for kids — with affordable concessions, and you can get autographs from guys who will sign pro contracts in a year or two.”

All that and stormtroopers? It’s proven to be a winning combination, both literally and figuratively.

Call of the East

Eckhoff previously owned the Wausau (Wisconsin) Woodchucks of the Northwoods League for 13 years, and was looking for a change of scenery when he bought the Blue Sox in 2013. When he bought the Woodchucks in 1999, the team was drawing some 600 fans per night. By his 10th year, attendance averaged 2,000. He attributes that to the team getting the word out about the quality of play — some 15 of his players eventually made the majors, including Ben Zobrist — but the fun factor as well. 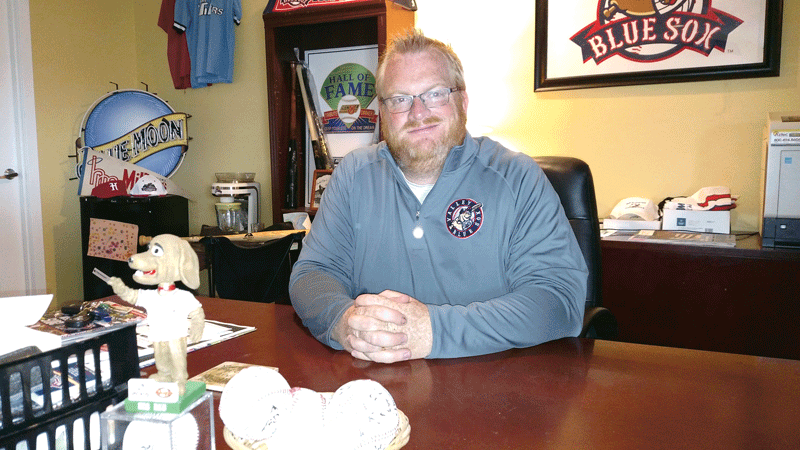 Hunter Golden says building a winning roster means recruiting not only talented players, but those who will best fit into the culture of the team and its region.

“There was a study done showing that 80% of fans who walked into a minor-league baseball game were leaving the game in the sixth or seventh inning and couldn’t tell you the opponent or the score, but they knew it was bobblehead night, and that they had enjoyed an affordable night out,” Eckhoff said.

Golden arrived in the baseball-management world much more recently, after parlaying a passion for sabermetrics — an innovative way to analyze a baseball player’s potential by crunching his in-game performance into, essentially, hard math — into a nationally visible role as a blogger and speaker on the subject. That caught the eye of Eckhoff, who tapped Golden as an advisor early on and later offered him the GM’s chair.

They have proven to be a solid team, pairing Eckhoff’s nose for creating a memorable fan experience with Golden’s ability, tested on the fly, to turn his sabermetrics expertise into actual roster building.

It’s a blend of science and art, Golden said, that extends far beyond the numbers.

“The first is key is building the culture you want,” he said. “There’s a lot of great talent out there, but it’s not just about how much talent a kid has. It’s the best kid versus the right kid — finding not only a baseball player who has great ability, but also a kid who’s going to thrive in our area and culture.”

The NECBL has long competed regionally with the Cape Cod Baseball League, and good players concerned with the difference in scenery between the two won’t make good Blue Sox candidates, he went on.

“I tell college coaches, ‘I don’t have a beach. They won’t be taking their parents out to dinner at a nice restaurant on the boardwalk. Guys that prioritize that stuff won’t have success here.’ I want guys who wake up in the morning, and what they’re looking forward to most is grabbing a bat and glove and getting out there to play baseball. That first month, everyone is into it, but when you get into your second month of three-hour bus rides, the first type of kid starts to run out of gas, but the second type of kid wants to be on that bus. That’s what we’re looking for.”

In return, the Blue Sox offer players a robust array of host families — there’s currently a waiting list to house a player for the summer — and activities ranging from trips to Fenway and Cooperstown to gym memberships and opportunities to engage with the community through educational baseball clinics and other events.

It’s a model that makes recruiting easier each season, Golden said. “Schools want to send their guys to us when they see how they’re treated and how they enjoy their time here.”

The city of Holyoke has noticed the recent run of Blue Sox success too, and has been making financial investments in the team, including $3,000 to improve the playing surface. The bullpens are also new, and the left-field fence — where long fly balls long went to die — was pulled in to boost home runs and, by extension, excitement.

Eckhoff also credited the businesses that are finding it increasingly rewarding to buy sponsorships in the club. “In the summer, we reap what we sow in the offseason,” he said of those relationships. “That’s what drives the engine — people buying billboards, community nights, ticket sales. It’s become easier for businesses to support you when you’ve got 2,800 fans out there for almost three hours, looking at the signage and hearing public-address announcements promoting businesses. It tends to multiply.”

Hopefully, he added, a new scoreboard is in the works for 2018. “You add some new pieces every year to improve the experience for fans. That’s our goal.”

The key, Golden said, is to take player development seriously, but also understand that families that show up at MacKenzie Stadium want to have a good — even silly — time. That’s where the bobbleheads and ketchup-and-mustard races come in. But the team doesn’t shy away from meaningful displays as well, such as a recent ceremony that honored the World War I hero for whom the stadium is named.

“What keeps the engine going is the fan experience,” Golden said. “The minor-league teams that fail appeal too much to the hardcore baseball guy. You should want as many people as possible to have access to baseball, and that means going out of your way to appeal to non-traditional fans.”

But the sabermetrician and lifelong baseball fan in him certainly appreciates the product he’s helping put on the field.

“There’s not a lot of difference between low-A ball and the best of college baseball,” he told BusinessWest. “It’s great that our community has access to that. It’s affordable entertainment families can enjoy on a Friday night. We’ve been able to do it the right way, and that’s the plan going forward.”

In other words, play ball.