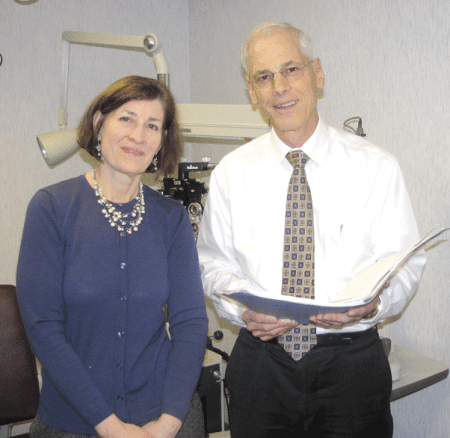 Drs. David Momnie and Camille Guzek-Latka say scleral lenses are giving hope to a subset of patients who have tried other remedies unsuccessfully.

Since Bradley Sweet was diagnosed with keratotonus, he’s had to choose between poor vision and constant discomfort. Until now.

Keratoconus, also known as ectatic corneal dystrophy, is a progressive, debilitating eye disease in which degenerative thinning results in irregular bulging of the normally spherical cornea, the clear covering in front of the eye. The condition results in grossly distorted vision, causing glare similar to looking through a windshield while driving in a rainstorm without using wipers.

Eyeglasses don’t help with this particular condition, leaving contact lenses as the only non-surgical path to functional vision. Unfortunately, said Dr. David Momnie, Sweet’s eye doctor and owner of Chicopee Eyecare, soft contact lenses have trouble conforming to the irregular cornea, while rigid, gas-permeable lenses that rest on the cornea can cause discomfort to that area.

In Sweet’s case, his corneal lenses fit poorly and ‘rocked’ on the surface, causing moderate pain. “On top of that, there was chafing; he had a scar from it,” said Dr. Camille Guzek-Latka, who has worked with Momnie since 1990.

But the team at Chicopee Eyecare was able to offer something different from most optometrists — scleral lenses, which contact the sclera, or the white part of the eye, and vault the entire cornea. If they fit properly, they offer both improved vision and comfort, Momnie told BusinessWest. For Sweet, they worked — and the rubbing and chafing was a thing of the past.

“No one else around here is fitting these,” Momnie said, adding that he knows of optometrists in Lowell and Boston who fit them.

Another patient came to the practice with similar issues. In 1994, she had undergone radial keratotomy, a procedure that involves making incisions in the cornea, and one that is mostly out of favor in the vision world. In her case, the procedure didn’t heal properly, and she ended up with distorted corneas, which causes blurred vision.

“We tried all kinds of things on her,” said Momnie, including soft lenses, corneal lenses, and hybrid lenses, which are hard in the middle but have a soft edge.

“We never got a good outcome with any of those,” Guzek-Latka said. “She was motivated, too — she would always say, ‘what do you have? What do you have?’”

When he decided to start fitting scleral lenses last year, Momnie called her up. “She’s the first one who came to mind. I said, ‘would you be interested in coming down sometime?’ She said, ‘I’ll be there in 10 minutes.’”

The fact that she finally found relief is immensely gratifying to Momnie and his team. Keratoconus affects somewhere between one in 500 and one in 2,000 people, and for those suffering with it, it can be debilitating.

“They can’t function; a lot of them can’t drive, can’t get licenses, can’t work,” Guzek-Latka said. “I’ve had people crying because they were so happy once they can see. That’s why we do it. To give someone their sight back is the best feeling in the world. People are so appreciative.”

Chicopee Eyecare has a long history in the region. In 1974, Momnie took the reins of the practice from his father, Dr. Paul Momnie, who opened the office in 1950. After Guzek-Latka came on board in 1990, Dr. Julianne Rapalus, a part-time associate, joined soon after, and the three have been working together to solve vision issues ever since. 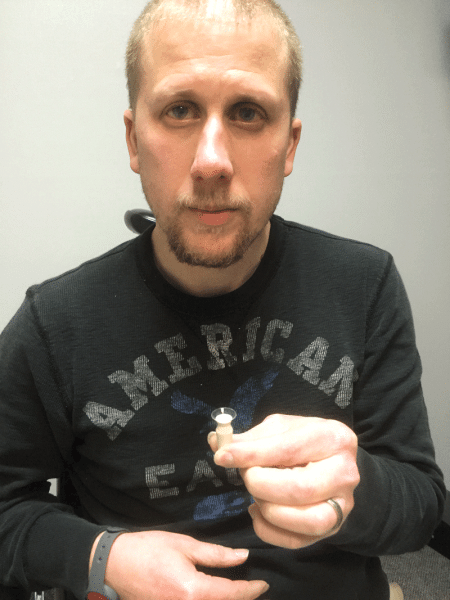 Specialty contact lenses have long been among the practice’s niches, Momnie said. Until about 10 years ago, his team fit infants as young as eight weeks old with special contact lenses after they underwent cataract surgery. Fortunately, today, children born with congenital cataracts are now able to undergo intraocular lens-implantation surgery, eliminating the need for such specialty contacts.

Scleral lenses are a continuation of that mission to provide widely unavailable solutions for specialty eye issues — in this case, keratoconus.

Glasses can’t help because the lenses are too far away from the surface of the cornea to create the smooth, refractive surface necessary to translate the image clearly to the back of the eye and therefore to the brain. And primitive scleral contact lenses were made of low-breathability materials (the same as in Plexiglas, actually), resulting in severe swelling of the cornea.

However, today’s scleral lenses are manufactured with highly oxygen-permeable materials and are a viable treatment for irregular, diseased, or severely dry corneas, Momnie said. “These lenses require an exact alignment as they rest entirely on the damaged cornea. Fortunately, for some people, newer designs and materials have made scleral contact lenses more compatible with the eye and more comfortable to wear.”

Despite these advances, he added, the eye-care community has been slow to embrace these lenses, probably because they require an entirely new fitting philosophy, Momnie noted. “The lenses must be aligned with the exact amount of clearance to achieve adequate comfort and oxygen transmission to the cornea.”

He’s not surprised their use isn’t widespread. “They’re very time-consuming to fit and require a large investment in fitting sets. However, the more we looked into the advances in scleral-lens technology in the last few years, the more we realized this was a service that we needed to offer.”

The only other therapeutic option for improving vision in keratoconus patients is called penetrating keratoplasty, also known as a corneal graft or corneal transplant.

“In some cases, the eyes are too distorted. If it doesn’t work, sometimes the next step is corneal grafts, but these can have inherent problems too,” Guzek-Latka said. Because of the inherent risks and high cost of surgery, this option is typically reserved only for patients who cannot receive treatment from contact lenses.

Also, “while many transplants are successful,” Momnie said, “the eye is permanently weakened, and often a complex contact-lens fitting is still required to restore vision.”

Keratoconus isn’t the only condition that can benefit from scleral lenses. Others include corneal scarring or irregularity due to trauma or prior surgery, as in the case of the patient with a past radial keratotomy; severe ocular surface disease associated with surface defects like erosions and ulcers; and a number of other conditions, including severe dry eye, radiation injury, chemical or thermal injury, or certain congenital disorders.

In the case of keratoconus especially, Momnie said, there are few options beyond scleral lenses.

“Very often, for keratoconus, we are the last stop before the operating table,” he told BusinessWest, noting that some patients’ corneas are too damaged to avoid surgery. “But if we can keep them off the operating table and fit them with one of these, they’re in good shape.”

Only a handful of laboratories in the country manufacture scleral contact lenses, he noted. Often, the fitting requires two or three attempts before a proper fit is achieved. Advanced, computerized instruments like a topographer and an optical coherent tomographer — which maps the corneal irregularity much like a landscape topographic map, but much more precisely — are used to improve the chances of success.

When a patient does find success with scleral lenses and avoids surgery, which is most of the time, it can be life-changing, Guzek-Latka said.

“To be able to get someone to see, these younger guys trying to raise a family … if you can do that for them, that’s the best feeling in the world for me,” she added. “Anybody can give you a pair of glasses, and we love doing that for people. But when you take someone who can’t see, can’t function, and get them back to work and a normal life, when they look at you and say, ‘I can see, I can see,’ that’s what I love.

“We help more than we can’t, and they’re often pretty desperate by the time they see us; they’ve tried everything,” she went on. “So if we get someone like that seeing and doing their thing, that’s priceless. It’s very rewarding.”