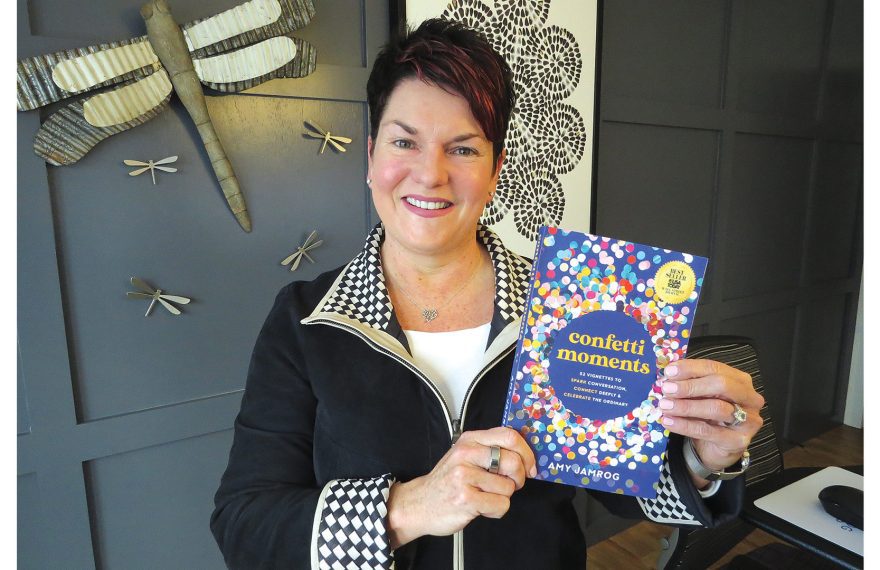 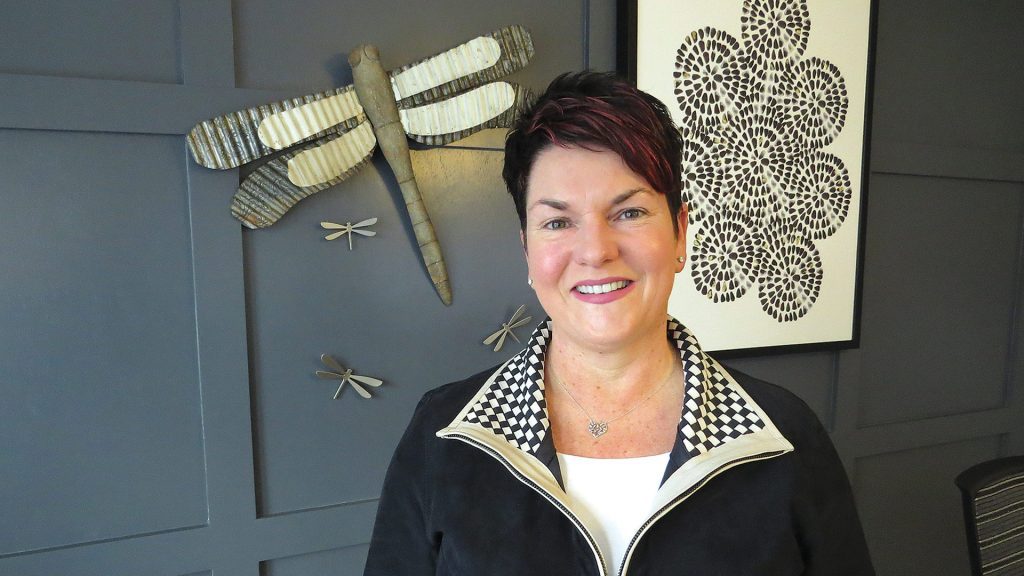 Amy Jamrog says she started Four Wings and wrote her book Confetti Moments to broaden her impact as a coach and consultant.

Amy Jamrog says the past few years have certainly been a rough ride for investors — and anyone looking for financial advice.

Meanwhile … those doing the financial advising have been looking for all of those same things. And this certainly helps explain the rapid growth and intriguing staying power of a relatively new resource for these financial advisors called Four Wings Consulting. That name, and the accompanying logo, have some real significance.

“The dragonfly is the only insect that can fly forward, backward, up, down, and side to side,” Jamrog, a 25-year veteran of the financial advising sector, told BusinessWest. “And so, my coaching is about helping people figure out which direction they’re currently flying in and getting them moving in a forward direction.”

Elaborating, she said the coaching service was designed to help financial planners come up with relevant content, innovative solutions, and new ideas month after month — and pass on what they learn (often about subjects other than money) to their clients. At the same time, they were getting needed support themselves.

“The dragonfly is the only insect that can fly forward, backward, up, down, and side to side. And so, my coaching is about helping people figure out which direction they’re currently flying in and getting them moving in a forward direction.”

“During the pandemic, I was finding that so many financial advisors were working really hard to help their clients, and not having any support for themselves and feeling really isolated,” she said. “I just put out this idea of creating a community of advisors and coaching them as a group.”

Initially she thought maybe 20 or 25 of her colleagues might be interested in being part of such a group. But to her surprise, 130 signed up for it, and most of them continue to join each week.

Light in the Darkness

For Jamrog, Four Wings has become one way to share and spread ideas and inspiration. Another is the book she recently wrote called Confetti Moments: 52 Vignettes to Spark Conversation, Connect Deeply & Celebrate the Ordinary, a title that really says it all.

The book, finished in August and launched in November, is now a Wall Street Journal and USA Today bestseller, popular with CEOs, team managers, and even families.

Confetti Moments is a collection of entries to a blog Jamrog started near the start of the pandemic called Wednesday Wisdom, which was started to bring some light to some very dark times. To explain, she turned back to when the world shut down.

“I wanted to bring something positive to our clients in the wake of such uncertainty and depressing information everywhere,” she explained. “So I started blogging weekly with uplifting stories that I thought would be a nice diversion for my clients. 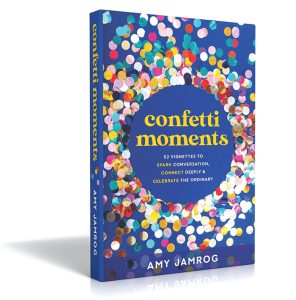 “I did it every week for two years during COVID, and I came to find out that thousands and thousands of people were reading it and forwarding it to their entire companies or their departments,” she went on. “I heard from people who said, ‘my boss sends me this every Wednesday, and I love your stories.’ And the feedback from my readers was ‘I wish you could package all these stories into a book — I would read the whole book again.’”

She did, and they are.

The 52 chapters in Confetti Moments take titles that include “Sometimes We Need a Wider Lens,” “You Can’t Take It With You,” “Stay in Your Lane,” “Lower Your Expectations,” “What Our Scars Say,” and “When Eight Oars Are In Sync.” Collectively, they are designed to provoke thought and inspire positive change, said Jamrog, who is doing all this in addition to her day job as a financial consultant with MassMutual.

“There are opportunities to impact one client at a time — that’s a fine career, and many people do really well with that. I got to a point, maybe five or six years ago, where I really wanted to have a bigger impact on my industry.”

As she talked about both Four Wings and Confetti Moments, she said they were both born from a desire to broaden her impact as both a financial consultant and coach.

“There are opportunities to impact one client at a time — that’s a fine career, and many people do really well with that,” she told BusinessWest. “I got to a point, maybe five or six years ago, where I really wanted to have a bigger impact on my industry. I knew that the work my team and I do as financial advisers is very, very good and very different than the average advisor, and I wanted to teach that.”

This was the start of Four Wings, through which she now coaches roughly 100 financial advisors, who take part in monthly Zoom sessions. This consulting work started a few years before the pandemic, she noted, but it really picked up steam during the early months of the pandemic, when, as she noted earlier, advisors were isolated, their clients were looking for answers, and many were just searching for a guiding voice.

“It started with financial advisors feeling isolated, trying to help their clients financially, and being resourceful for them,” she said. “But they were realizing that many of their clients were just stuck; they couldn’t make financial decisions, or they [the advisors] didn’t know how to move them forward in the wake of such uncertainty and panic for most people.”

Three years later, the community of advisors she created, who pay a monthly subscription fee to take part, continue to meet, with participants from across the 413 and also across the country, all of whom are still helping clients cope with a volatile market, uncertainty, and growing fears about recession and what might come next.

“Advisors want to be resourceful and bring a positive message to the clients,” Jamrog said. “But at the same time, they also need an outlet, someone to vent to, someone to present their worries and concerns to and get some great feedback. The biggest challenge in being a financial advisor is that we give advice and guidance all day long, but sometimes it’s nice to actually get some advice and guidance; that’s what I provide, and that’s what these groups provide.”

As for Confetti Moments, she said she’s already sold several thousand copies of the book, which is comprised of what she considers the 52 “best” of her Wednesday Wisdom blog entries.

Each chapter has the blog post, followed by some “Ideas to Spark, Connect & Create This Week,” and a page to write down some notes.

In the chapter titled “Stay in Your Lane,” Jamrog writes: Safety features on cars are designed specifically to keep the drivers safe. Too bad we as humans don’t come equipped with those warnings too. Wouldn’t be great if we came programmed with a little sensor that reminded us periodically to stay in our lane? How often do we take on things that are not our business? Do you find yourself straying into other people’s areas with good intentions — probably even genuinely meaning to help them — but then realize that staying in your own lane is the better, safer place? For everyone?

For those ideas to spark, connect, and create, or ‘prompts,’ as she calls them, she has these:

• Look around at different areas in your life. Where are you drifting out of your lane?

• In an effort to be ‘helpful,’ have you drifted into someone else’s lane? Do you owe them an apology and a promise to stay out of their way in the future?

• What is your lane? Take some time to define this for yourself since it can change over the years. Once you identify the area(s) you excel and thrive, you’ll be happy to spend more time in those lanes.

“The prompts ask you to change something in your life over the next seven days,” she explained. “And then you do it again next week.”

Elaborating, Jamrog said the book is inspiring people to “celebrate the ordinary,” and in the few months since the book came out, readers, many of them business owners and managers, are heeding that advice and encouraging others to do the same.

“I have five appointments this week for corporations who want to book me for corporate speaking engagements because companies want to bring more Confetti Moments to their employees,” she said, adding that this was a typical week.

Summing things up, she said that all aspects of her work, including her day job, are about creating such Confetti Moments. That’s what she meant by broadening her impact.

And if the volume of book sales, as well as the number of advisors attending her weekly Zoom meetings, are any indication, then she is certainly succeeding with that goal.