The funding collaborative will award up to $5,000 to programs serving a minimum of 10 participants. Some awards may be higher depending on available funding and demonstrated need. Applications are due by May 15 and grantees will be notified on or before May 31. Funds must be used by Sept. 30. The grant proposal can be found on the Berkshire County COVID-19 Fund page.

“As we pivot to recovery, we see the toll this pandemic has taken on the well-being of our children, youth, and families. We heard from our community partners how tough the year has been and knew we needed to help,” said Candace Winkler, CEO and president of Berkshire United Way. “We want to help our children and youth get back on track with their social and emotional development, and hope to see some fun and innovative grant proposals.”

The new funding builds on the partnership established in March 2020 with the launch of the COVID-19 Emergency Response Fund for Berkshire County. From March 19 to Aug. 3, 2020, the emergency fund awarded more than $2 million through 132 grants to 95 nonprofits supporting low-income families, communities of color and immigrants, and seniors through services such as food pantries, health care, and housing.

Contributions can still be made to the COVID-19 Emergency Response Fund.

She’s Transforming the Criminal Justice System in This Rural Region 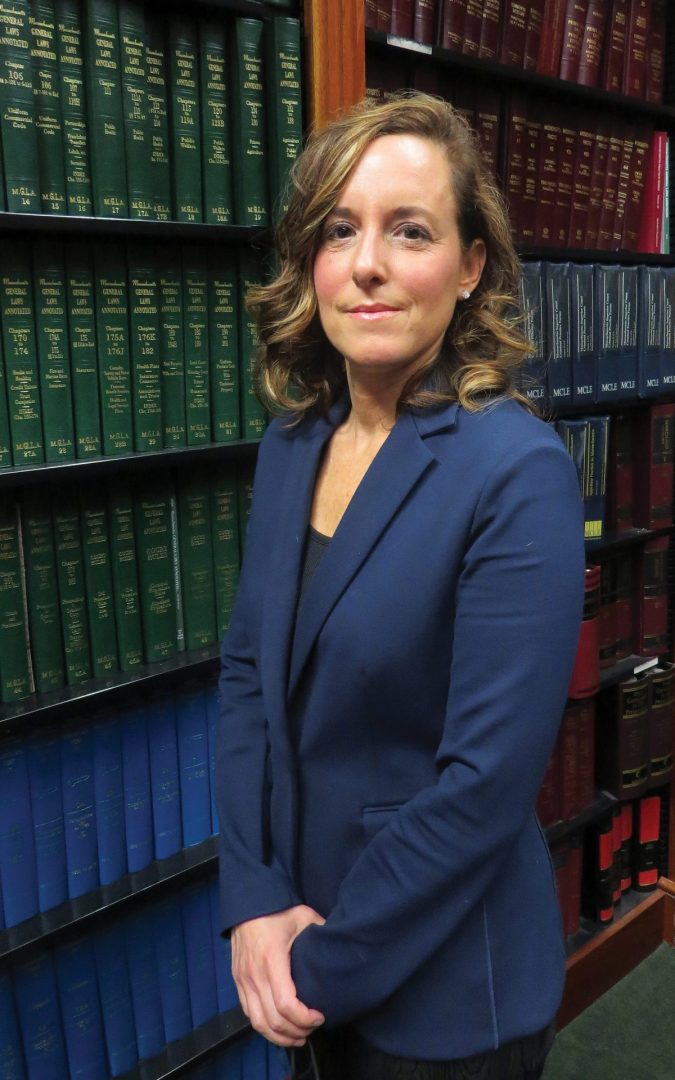 Like most who join the legal profession, Andrea Harrington says there’s a story behind her choice of career path.

In her case, it wasn’t a family member in that line of work who inspired her, or even a role  model from the community — meaning the Pittsfield area. Instead, it was the lawyers she saw on TV shows, especially L.A. Law, which was in its prime when she was in high school, and some real-life lawyers, like Anita Hill and Hillary Rodham Clinton, who inspired her to become the first in her family to go college, and eventually earn a law degree.

“Growing up, I didn’t really know many professional people,” she recalled, noting that her parents, like so many others, worked at General Electric’s massive transformer-production complex in Pittsfield. “I would see TV shows with lawyers, and to me, they looked like people who have the power to make change.”

Not all lawyers have used that power, but Harrington certainly has. In two short years after being sworn in as district attorney of Berkshire County, she has introduced a number of important changes to the criminal-justice systems in this rural county — changes that are already having an impact. For example, Harrington has:

• Implemented a no-cash-bail policy for most defendants in county courts;

• Assembled a staff of reform-minded individuals that better reflects the makeup of the county’s population;

• Implemented a vertical prosecution model so that crime victims in District Court work with the same assistant district attorney and victim-witness advocate while their cases are resolved; and

Above all, Harrington said she is changing the mindset of criminal justice in the Berkshires, from a system that has focused on punishment to one centered on “problem solving.”

And there are many problems to solve, she told BusinessWest, listing poverty, opioid addiction, domestic violence (Berkshire County has a 33% higher rate of restraining orders than the rest of the state), behavioral-health issues, and many others.

“I saw a criminal-justice system that was stuck in this old model — a punishment model. And given how many resources were being put into it, we were not getting a good return on that investment, and it was just spreading misery throughout our community.”

Harrington’s influence, just two years after triumphing in a hotly contested race, is perhaps best summed up by Noreen Nardi, executive director of the Hampden County Bar Assoc., who nominated her for the Women of Impact award.

“The election of Andrea Harrington to Berkshire district attorney has had a transformational effect on the county, its criminal justice system, and politics,” she wrote. “Andrea has remade operations in the Berkshire District Attorney’s Office with an eye toward modernization, innovation, and integrity. She’s revamping how the staff prosecutes crime and handles court cases, changing its media and communications practices to emphasize complete transparency, and overhauling operations on community outreach, victim-witness advocate, and the Child Abuse Unit so that Berkshire County citizens receive the fair and equitable justice they deserve whenever they come into contact with the Berkshire DA’s Office.”

The race for DA in 2018 wasn’t Harrington’s first bid for public office. Indeed, two years earlier, she ran, unsuccessfully, for a state Senate seat. It was a moment in her life that would in many ways crystalize all that came before — and pave the way for all that has followed.

But before getting to that race, we need to go back further and explain how she got there.

As noted, Harrington, inspired by the characters on L.A. Law and other shows, and those real-life role models as well, graduated from the University of Washington and earned her juris doctor degree from American University Washington College of Law in 2003. One of her early career stops involved work representing convicted death-row inmates in post-conviction appeals in South Florida, which she described as eye-opening. 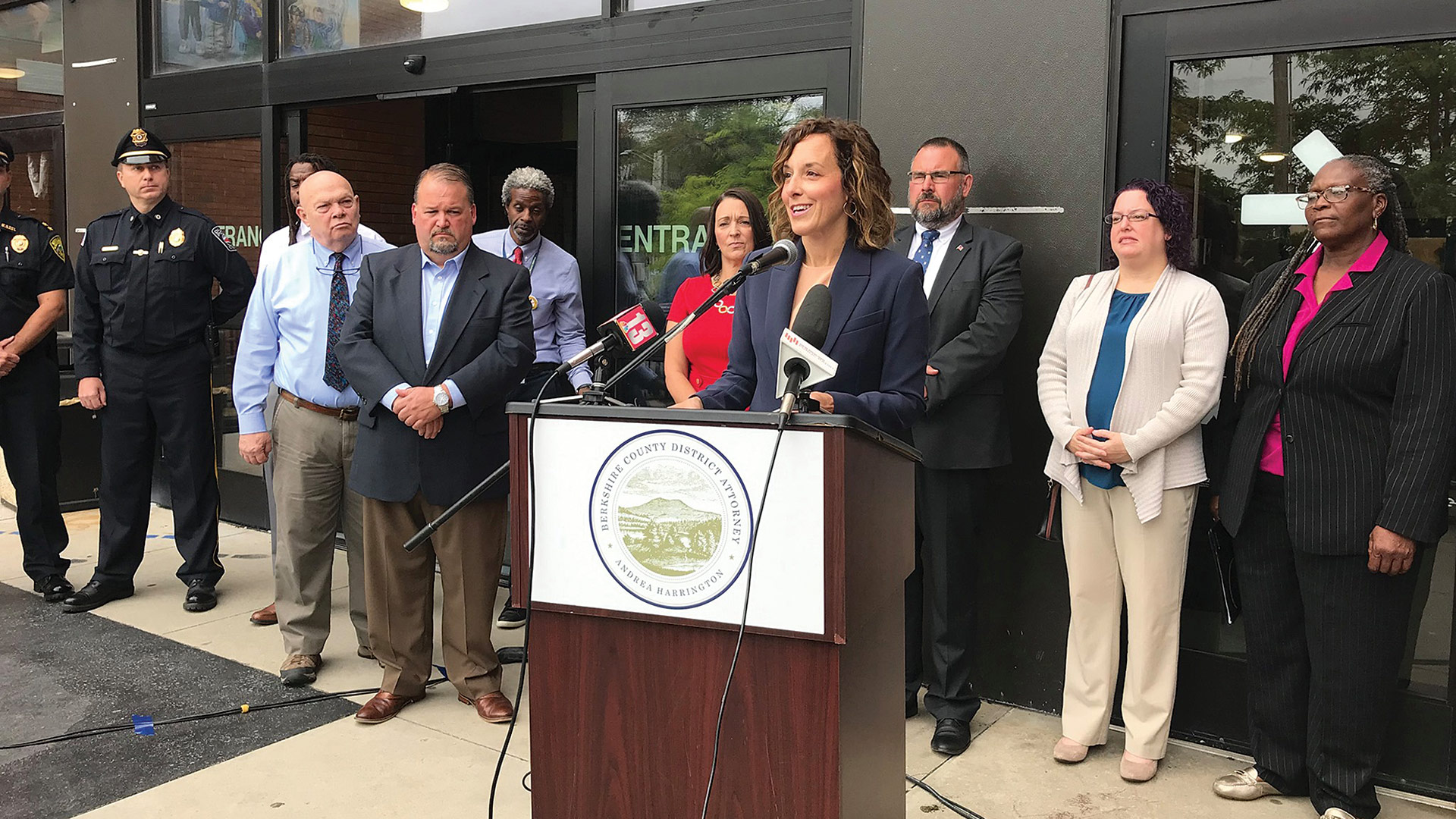 Andrea Harrington addresses those gathered at a press conference to announce the launch of a juvenile-justice initiative, one of many programs she has introduced.

“That experience drove home for me how much power law enforcement does have over people’s lives,” she noted. “And also, how vital it is that we have prosecutors and police who have a healthy respect for the constitutional rights of defendants, and for civil rights.”

Elaborating, she said her work, which involved both the guilt and penalty phrases of these convictions, often centered on why such heinous and tragic crimes were committed. “And this gave me a different kind of lens — more of a problem-solving lens,” she said. “It’s sad to look back at someone’s life and recognize that, if there had been other kinds of intervention earlier on, then these really terrible crimes could have been prevented.”

After Florida, Harrington amassed more than a dozen years of legal practice, much of it defense work, while also raising a family — and watching her native Berkshire County change, for the worse.

“I was working in the courts, I had two young kids, and I was frustrated by what I was seeing in Berkshire County,” she explained. “In the courts, we see the big societal problems, we see the effects of the economic downturn in high rates of domestic violence, lack of opportunity, and drug use.

“I saw a criminal-justice system that was stuck in this old model — a punishment model,” she went on while explaining her involvement in politics and eventual run for the state Senate. “And given how many resources were being put into it, we were not getting a good return on that investment, and it was just spreading misery throughout our community. I thought that, if anyone was going to address these problems, I was going to be a part of it. I didn’t want to just be a cog in this machine that I didn’t think was working.”

While she lost that race, she was certainly encouraged by those who were telling her she should be running for a different seat — district attorney. And after winning a race ranked the top story of 2018 by the Berkshire Eagle, Harrington immediately went to work, fulfilling campaign promises and, more importantly, changing the criminal-justice system in Berkshire County.

One of her primary initiatives involved essentially eliminating the prosecution’s request for cash bail, which data shows disproportionately penalizes low-income individuals and African-Americans in most District Court cases.

“Who remains incarcerated pre-trial is driven by who can afford to post bail or not,” she explained, adding that this is one of many attempts to bring changes to long-established policies that were — in her estimation, at least — not working.

Another initiative undertaken early on was the formation of the Berkshire County Domestic and Sexual Violence Task Force and Steering Committee, assembled to address a growing public-health crisis in Berkshire communities and build prevention programs, she explained, adding that the Berkshires, like other rural areas, has high rates of these crimes.

Overall, Harrington said, the nature and volume of crime in Berkshire County has changed since she was growing up there, with more violent crime (there are eight homicides currently being prosecuted, a much higher number than in years past), drug-related crime, gang-related crime, and domestic and sexual violence. And her office is responding accordingly. 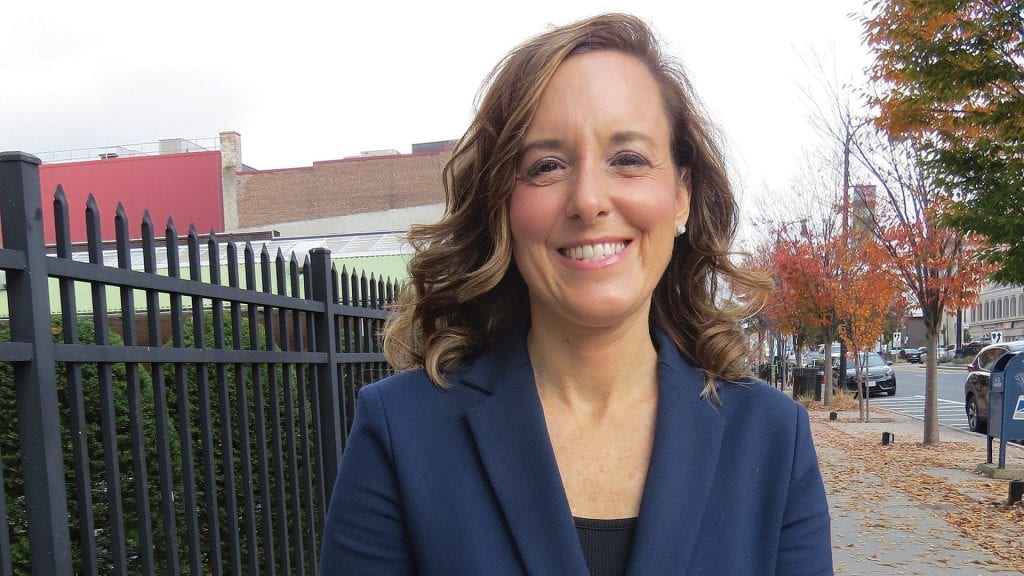 Andrea Harrington says she’s adjusted the focus of the criminal-justice system in the Berkshires from one focused on punishment to one centered on problem solving.

“One of my proudest accomplishments is how we serve victims in this office,” she explained. “Previously, the practice was, once a case is actually arraigned and being prosecuted in court, the office would provide services to victims of crime. But we’ve expanded that; we want to have contact with victims as soon as there is a complaint of a crime — we think that’s really critical in being able to prosecute domestic violence and sexual assault.”

“We’re putting a lot more emphasis on doing high-quality investigations for violent crime,” she noted. “And we’ve out a lot of work into that, building our relationships with small-town police departments and also the State Police.”

Harrington is currently prosecuting her first murder case, a matter that involves the shooting death of a woman in August 2019. COVID-19 has slowed the pace of progress in the courts, she noted, adding that she can’t say when the case will be coming to trial.

What she loves more, though, is having a bigger impact — an impact that goes beyond a single case, as significant as it might be, and translates into real change, real reform, and lasting significance.

This is what she thought lawyers had the power to do when she was watching those TV shows more than a quarter-century ago. Now, she’s proving they can, and while doing so, she has become a true Woman of Impact.