City Enterprise and Its Ambitious Owner Create a Blueprint for Expansion 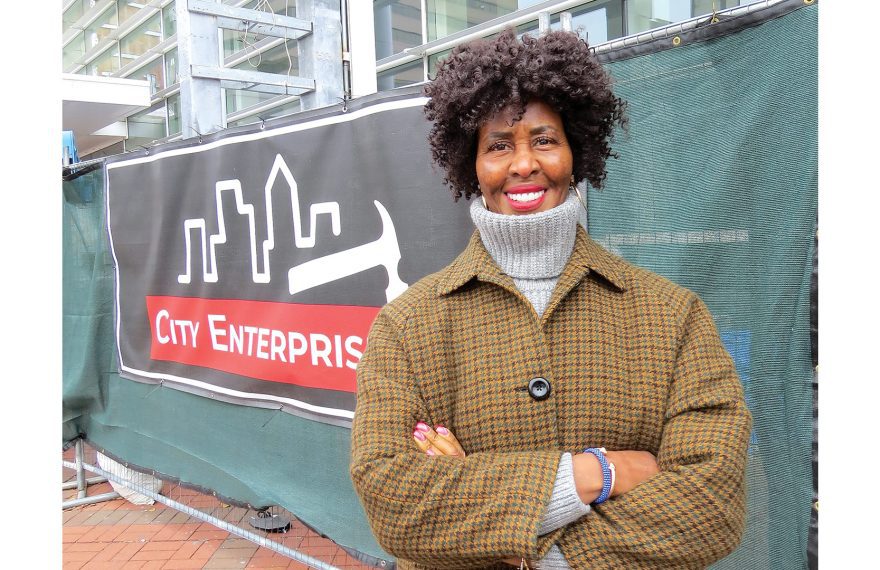 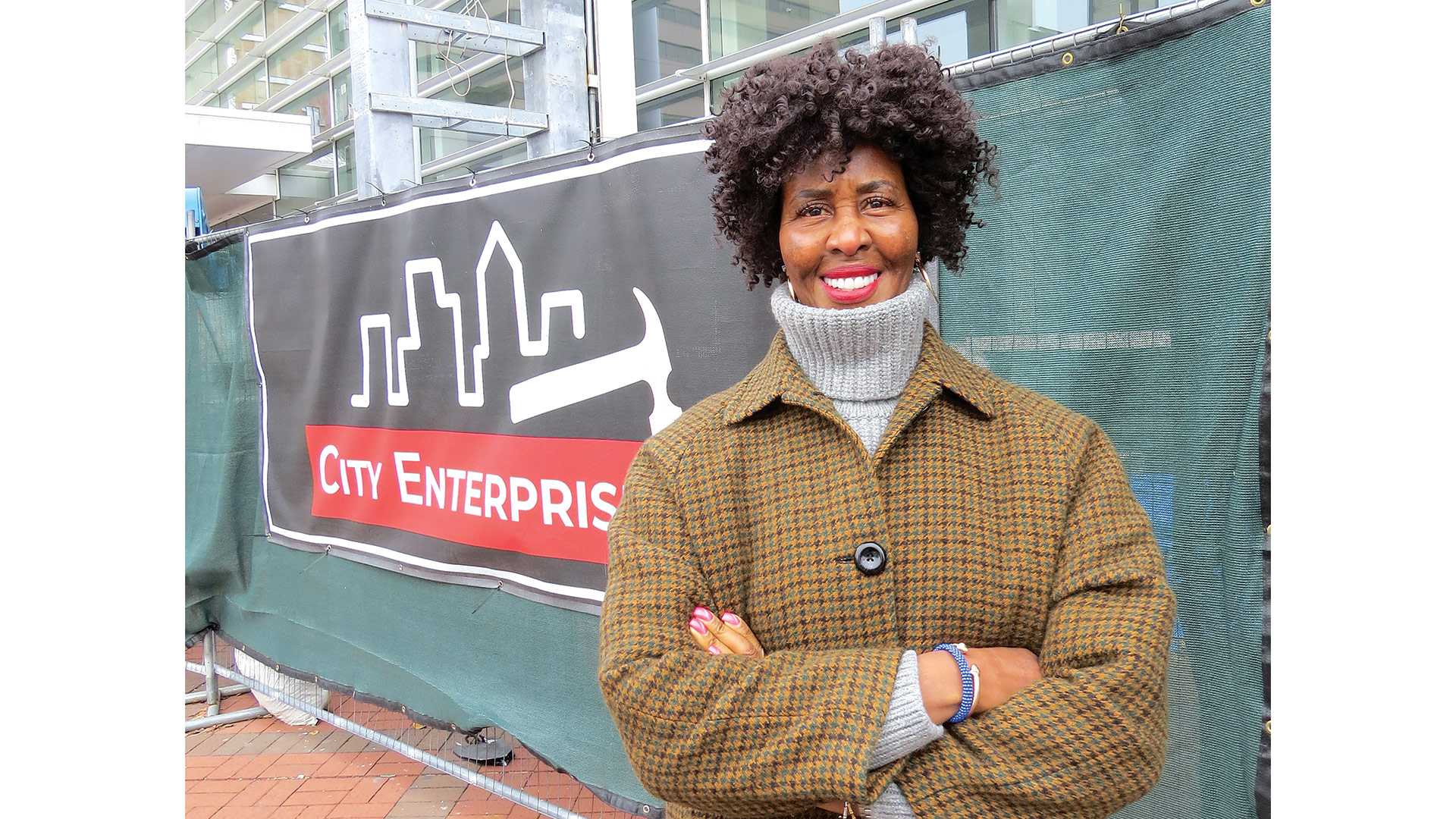 Wonderlyn Murphy has some ambitious plans for City Enterprise, the construction company she started nearly two decades ago.

She wants to take it to $150 million in annual revenue — roughly six times the current level. She wants to expand geographically and open new locations, perhaps one in Florida and another in Maine or New Hampshire. She wants to build a new headquarters facility in this region because the company has clearly outgrown its current home on Berkshire Avenue in Springfield. She wants to add more staff, and she wants to broaden the portfolio with larger projects, likely through partnerships with larger construction firms.

Yes, there is a lot on her ‘want’ list. But she believes it’s all realistic, and, more importantly, she has a blueprint for getting there.

Getting where she wants to go will certainly be a challenge, but Murphy has already clearly shown that she has the ability to set goals and then reach them through hard work, determination, and overcoming obstacles in her path.

“We’re in a transition period now where I’m growing the company. And I have some very aggressive goals for the next five years. We get there through collaboration and partnerships, we get there by building the employees based on our core values, get there through outside-the-box thinking and vision, more than just focusing on getting the next job.”

Indeed, she has taken City Enterprise from a small, one-person venture that started with Murphy designing, building, and flipping homes to a multi-dimensional company with 14 employees that has secured work with clients ranging from UMass Amherst to the U.S. Park Service; from the General Services Administration to the U.S. Coast Guard.

She’s done all this by making connections, forging relationships, and, yes, taking full advantage of City Enterprise’s status as a woman- and minority-owned business.

Such status has certainly opened some doors, but Murphy has had the entrepreneurial drive, and that determination, to march through those doors and, as noted, put down some ambitious plans for what comes next.

Today, Murphy told BusinessWest, thanks to some new staff additions, and especially the addition of Vice President of Operations Charles Young, she is able to spend more time on the business, rather than in it.

And with that fundamental change, she believes she is putting the pieces in place for a story of change, growth, and taking her company to places that she probably couldn’t have imagined 20 years ago.

But then again, she probably could.

As noted earlier, City Enterprise has been a work in progress, or a dream in progress, for Murphy for nearly two decades now, or not long after she graduated from Wentworth Institute of Technology in Boston with a degree in architectural design technology.

At first, it was a part-time pursuit, something she did after working the overnight shift (midnight to 8 a.m.) as a correctional officer with the Hampden County Sheriff’s Office at the Western Massachusetts Correctional Alcohol Center on Howard Street, since torn down to make way for MGM Springfield. That work was a learning experience on many levels, she said, and one that has helped in her current roles as employer and entrepreneur.

“It was a very interesting experience, to say the least,” she told BusinessWest. “I got to know the population and came to understand what it really meant to be a corrections officer; there’s much more to it than slamming cell doors, even though there were no cell doors there. The population came from varied backgrounds, and to navigate all of that took a certain amount of finesse.” 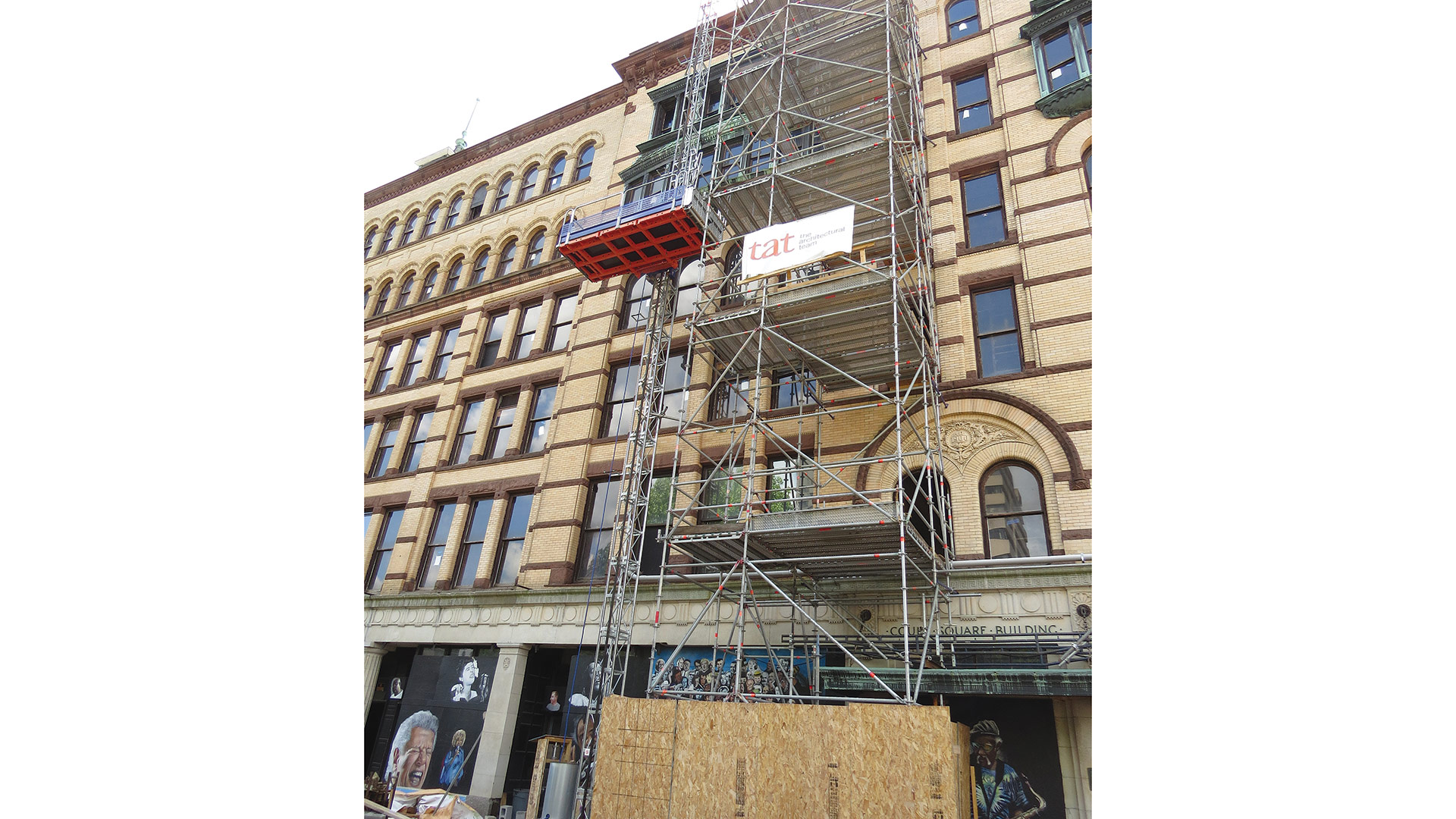 Abatement work at the former Court Square Hotel in downtown Springfield is one of many municipal projects awarded to City Enterprise.

While working in corrections on Howard Street, she designed, built, and sold a few houses, including her first such endeavor, a home on Eastland Street, just a stone’s throw from City Enterprise’s current home on Berkshire Avenue. Later, she designed and built a two-home development on Parkerview Street in Springfield and handled a few renovations and additions as well.

It was difficult to manage both sides of her work life, but she managed.

“I would get out of work at 8, and I would go straight to my job sites and my projects, because I was the only one doing it at the time,” she recalled. “So I had to line up my subcontractors; I had to be on site and make sure everyone was there. I had to schedule everything … and time is always of the essence in real estate, because you want to hit the market at the right time.”

This was the start of City Enterprise, she said, adding that, as she continued to operate her venture out of her basement and create the first of what would be several business plans for its future, Murphy applied for status under what is known as 8A under the Small Business Administration, a program created to help firms owned and controlled by socially and economically disadvantaged individuals.

Applying for such status is a difficult and lengthy proposition, she said, adding that it eventually took her three years to gain that designation. At first, she was turned down, in large part, she believes, because she was still working in corrections at the time and thus — to those reviewing her application, at least — she was not fully committed to her business venture.

After waiting a year — and after leaving the Sheriff’s Department in 2012 and making City Enterprise a full-time pursuit — she applied again, and this time was granted 8A status. And during that year, she was making connections and building relationships with agencies ranging from the General Services Administration to the Army Corps of Engineers to the U.S. Navy.

“I was letting these people know that I was coming — I was developing relationships even before I was admitted into the program,” she said. “Because I knew the 8A was more government-contract-driven, I sought out those agencies.

“I was confident because I made the necessary sacrifices to make that happen,” she said. “I knew there were things I had to do to get past that first rejection, and I did them. I took full advantage of that year.”

The 8A designation certainly opened some doors, as noted earlier, especially at government-owned and operated facilities, such as Westover Air Reserve Base, where she earned first commercial contract — renovation work in the bowling alley on the base. 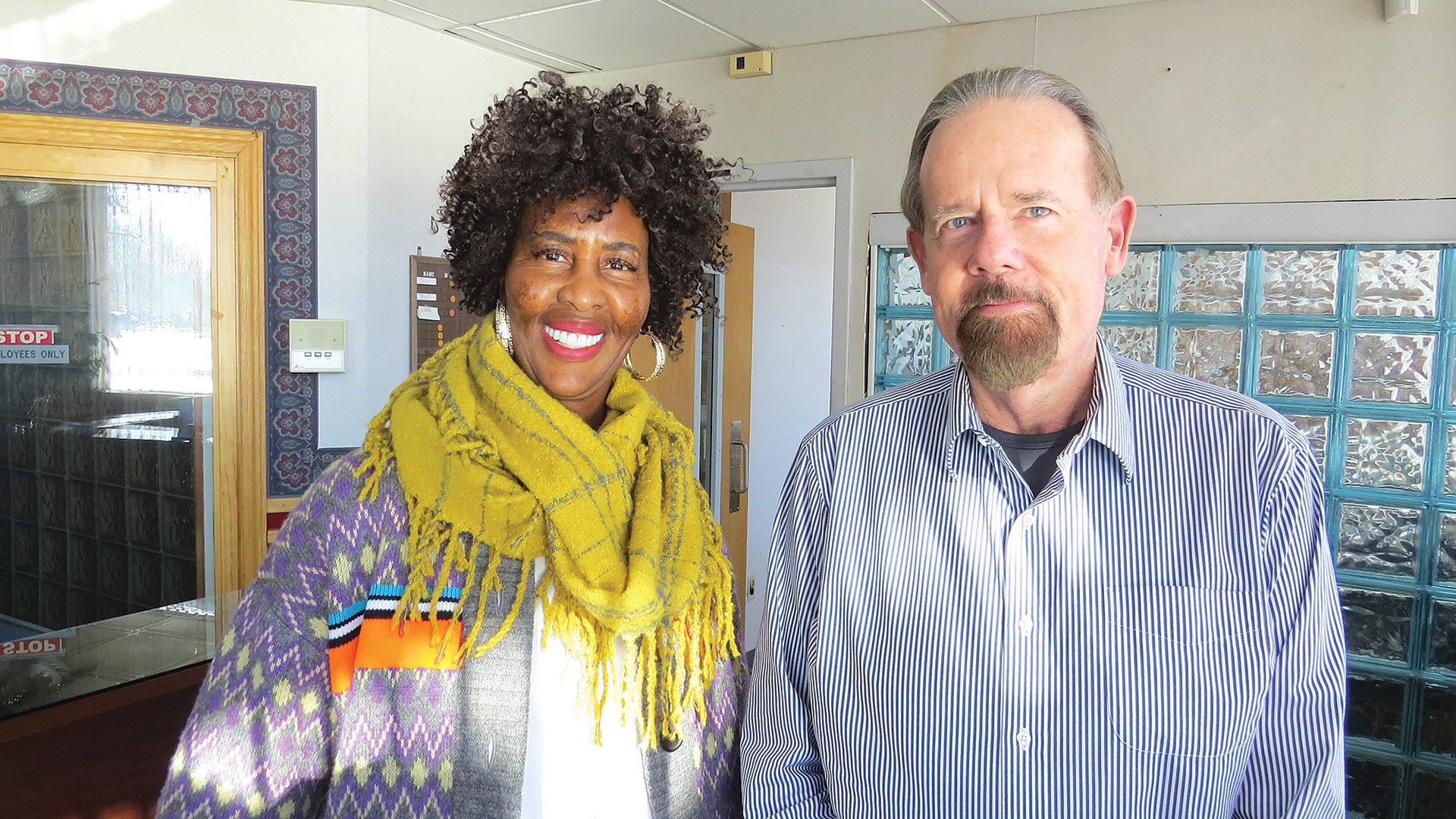 This was another important learning experience, she said, adding that she initially hired the wrong type of flooring company to work on the bowling lanes, but later secured the right subcontractor, a company in Ohio, and finished the project in good order.

“It was a very difficult entry into the commercial space, but we got through it, and it was a great learning experience,” she said, adding that the company would go on to secure projects with a number of government entities in the ensuing years.

That list includes the city of Springfield, which hired the firm to handle the abatement of the historic former Court Square Hotel, which is being converted into market-rate apartments; the National Park Service, which hired City Enterprise to undertake restoration of the porch of the commanding officer’s quarters at the Springfield Armory; UMass Amherst, which has contracted with the company on a number of projects, from renovations of the Rand Theater to envelope repairs at several of the dorms; UMass Medical School, which hired the company to do skylight replacement; the U.S. Coast Guard, which used the company for repairs and renovations to its small-arms range; and countless others.

Current projects include installation of a new marquee sign at the MassMutual Center, work at the Beals Library in Winchendon, and construction of a new amphitheater, also in Winchendon. The company has also submitted a proposal for the Old State House in Boston, what would be its most significant project to date, and is awaiting word on that bid application.

The growing list of clients, the wide range of work undertaken for them, and the growing staff at the company, now numbering 14, including an estimating staff, project managers, an accounting department, and that aforementioned vice president of Operations, shows how far this company has come since Murphy started building houses.

More intriguing, though, is where she wants to take it moving forward.

Indeed, as she mentioned at the top, City Enterprise is in a transition stage in its development, and the broad plan is to essentially scale the operation — in many different ways.

One of them is geographic reach. She said she would like to have a location in South Florida, and perhaps another in northern New England to better serve potential clients in that market. She is also looking at growing through acquisition as well.

“Time is always of the essence in real estate, because you want to hit the market at the right time.”

Meanwhile, as noted earlier, she is settling into … not a new role, necessarily, but a different set of responsibilities as the company makes this transition. Indeed, instead of handling many of the day-to-day matters, which will now be handled by Young, she will be even more focused on the proverbial big picture and goal setting.

“I’m not as involved with the day-to-day as I was a year ago because I have brought on a vice president of Operations,” she said. “But I am very involved with executing my vision and getting my team aligned with the vision, and getting the right people to go with me to that number I just mentioned — $150 million — which is probably the most important part.” 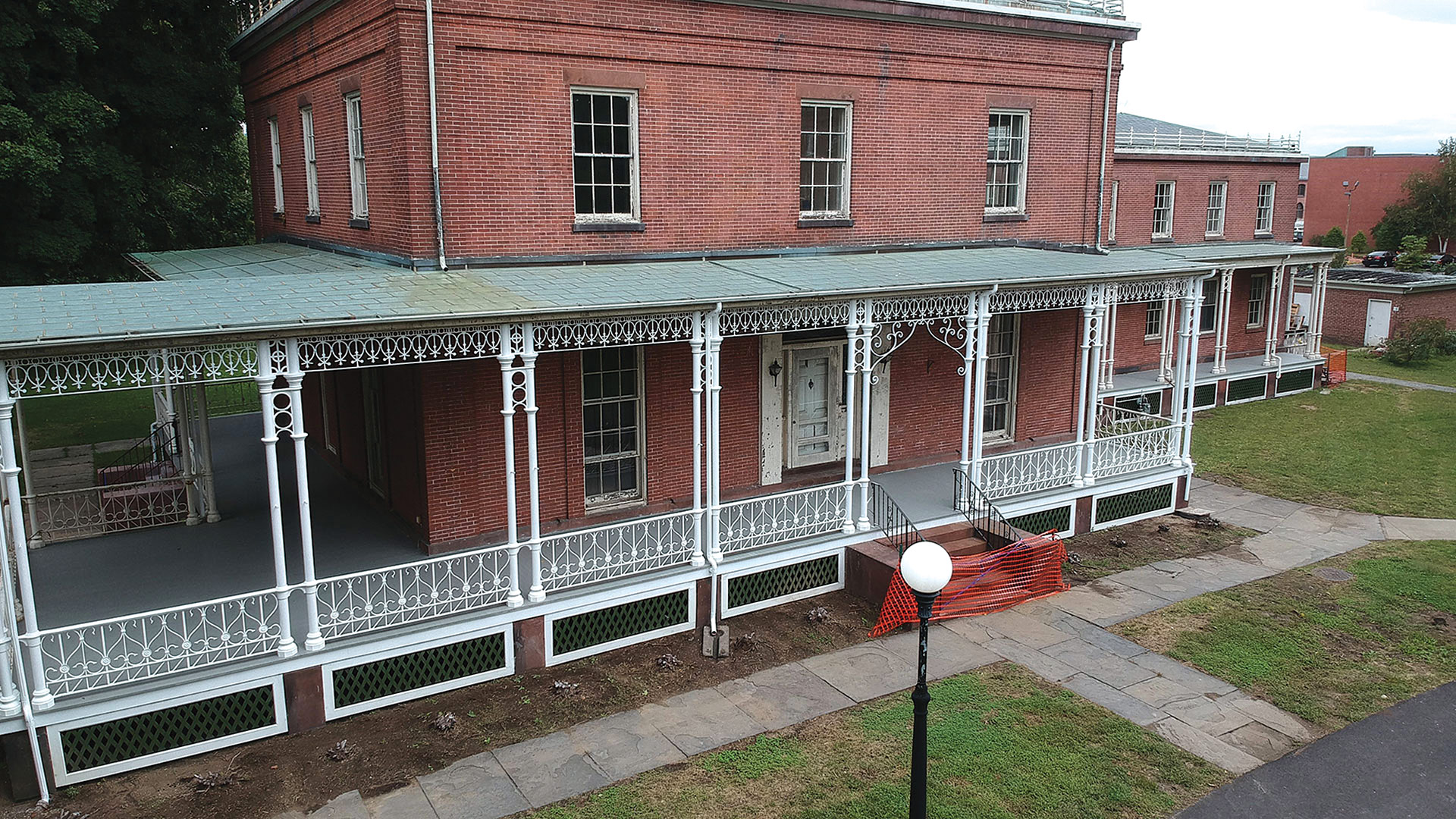 City Enterprise has tackled a number of assignments involving government agencies, including work to restore the porch at the commanding officer’s quarters at the Springfield Armory.

Elaborating, the company’s broad portfolio of projects — meaning the depth and diversity of the client base and the wide variety of work — is indicative of “where we’re going and who we are,” Murphy said, adding that the focus moving forward is simply on controlled growth and doing what’s necessary to meet those lofty goals.

A new headquarters building is a key part of that equation, she said, adding that she has plans on paper for a new building and a site in mind. Further diversification of the portfolio of clients is another key goal, she said, adding that the company is working to add more colleges and universities, government agencies, municipalities, and healthcare facilities, among others, to that already significant list.

Continued relationship building and potential collaborations with larger construction companies on larger projects is another part of that equation, she said, adding that the company’s status as a woman-owned and minority-owned company could be a huge asset in such collaborative efforts.

Such conversations are ongoing, Murphy said, adding that, as she moves away from the day-to-day of running City Enterprise and more into the broad task of marketing the company and being its “face,” her job description falls into the category of making and building connections.

“It’s a very ambitious place I’m going to,” she said in conclusion, adding that she is putting the pieces in place for something special. The foundation has been built, and she is now ready to build upon it — and in dramatic fashion. u