What Are the Barriers to Women’s Economic Security? 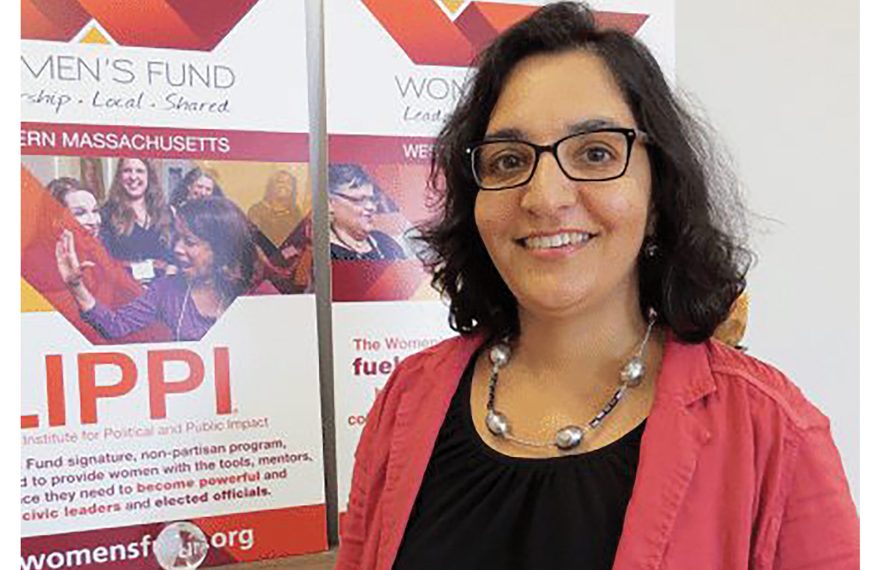 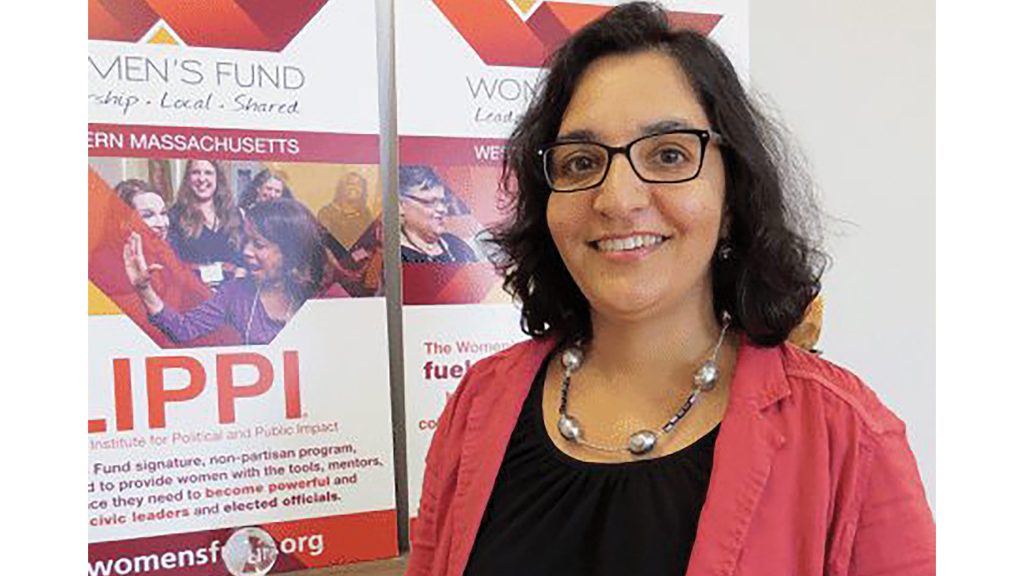 Donna Haghighat says the factors holding women back in the workforce must be fully understood in order to shift the tide.

The numbers speak for themselves. But more importantly, they demand a response.

According to a global study published in the Lancet, between March 2020 and September 2021, women were more likely to report employment loss than men during the pandemic (26.0% to 20.4%), as well as more likely to drop out of school or forgo work to care for others.

“The most significant gender gaps identified in our study show intensified levels of pre-existing, widespread inequalities between women and men during the COVID-19 pandemic,” the report reads. “Political and social leaders should prioritize policies that enable and encourage women to participate in the labor force and continue their education, thereby equipping and enabling them with greater ability to overcome the barriers they face.”

That’s exactly what the Women’s Fund of Western Massachusetts — and a broad network of like-minded partners — have in mind through an effort they’re calling the Greater Springfield Women’s Economic Security Hub.

That includes a lack of unpaid caregiving. During the pandemic, that issue was the dominant factor in women dropping out of the workforce at an uprecendeted rate. The numbers have recovered somewhat, but not all the way, and the factors causing the workforce exodus remain problematic.

“We felt as though the many ways society was looking at women’s economic security was too narrow of a lens. So we created our own framework.”

“Women weren’t dropping out of the workforce because they wanted to stay at home and eat bon-bons, but because schools were closed or childcare centers were closed, and someone needs to be home with the children,” Haghighat said. “Oftentimes, because of pay differentials and so forth, it made more sense for women to drop out of the workforce.”

Then there are issues around transportation and internet access. “Prior to the pandemic, people didn’t realize how critical that was,” she went on, whether the problem was lack of online access altogether or having difficulty sharing devices or WiFi with other family members.

This work will focus on women, mostly of color and living at or below the poverty line, to understand the myriad factors that make or break an individual woman’s ‘economic engine,’ thereby affecting family prosperity.

The UMass Donahue Institute developed a survey instrument that will be refined, implemented, and analyzed by the UMass Amherst Center for Research on Families, and the survey will delve into 12 interconnected determinants, to form a framework which will be used to survey women in communities that have historically faced disproportionate challenges to economic growth. 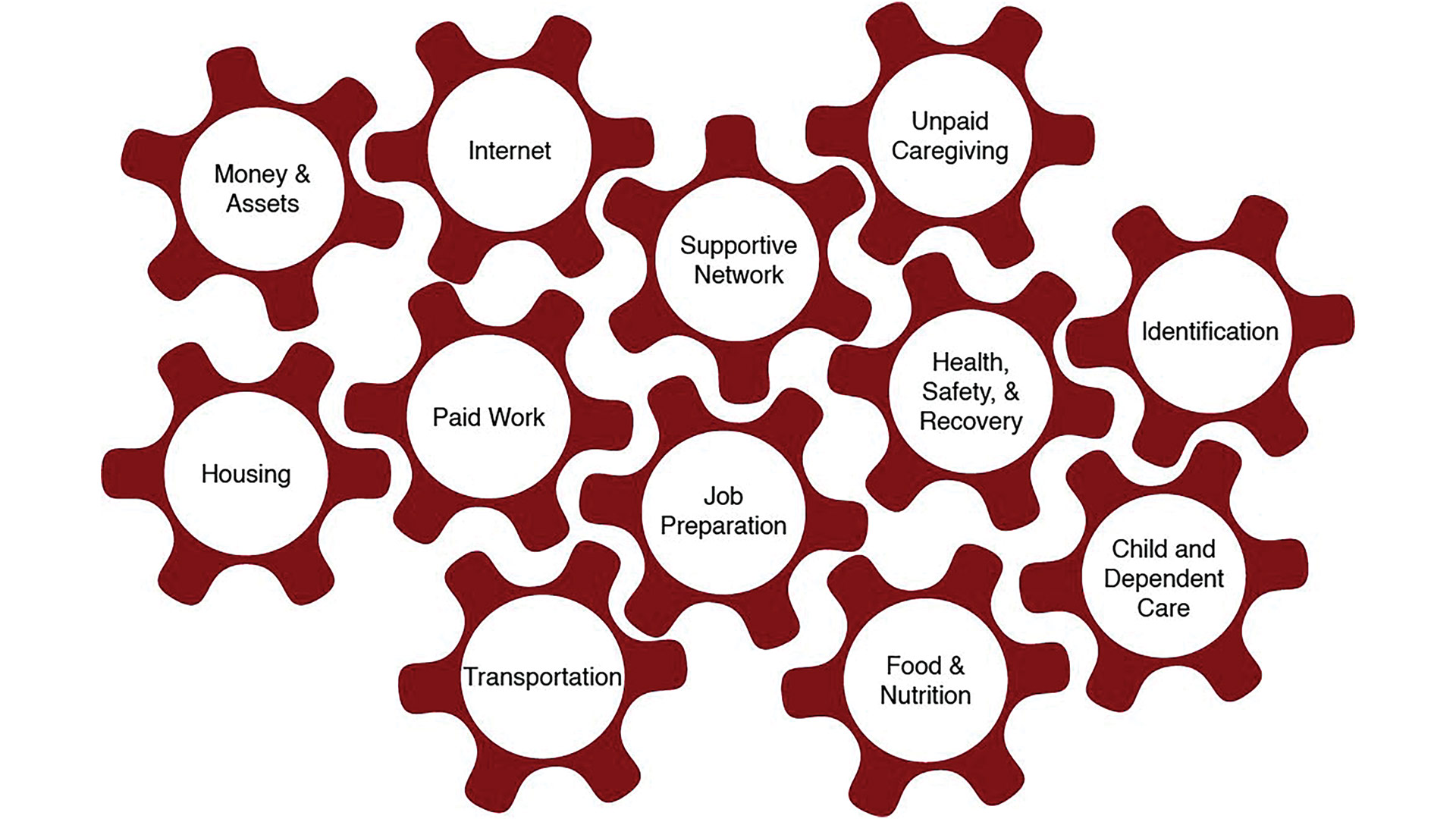 “We’ve portrayed a women’s economic engine as a bunch of interlocking gears,” Haghighat said. “Each of these things can have an effect on the other things.”

Luisa Sorio Flor, a postdoctoral fellow at the University of Washington and lead author of the Lancet study, noted that “the pandemic has exacerbated gender disparities across several indicators related to health and other areas of well-being. Women were, for example, more likely than men to report loss of employment, an increase in uncompensated care work, and an increase in perceived gender-based violence during the pandemic, even in high-income countries.”

By partnering with the UMass Donahue Institute and surveying 200 area women, Haghighat hopes to localize those global trends to determine where the economic engine is jamming.

“Is it child and dependent care or job preparation or lack of a supportive network?” she asked. “We added ‘supportive network’ as one of the determinants we use, understanding that, when something goes wrong in a woman’s life, she might have a supportive network she can reach out to when things are going wrong, like a grandmother who can watch a child. But we realize that, oftentimes, women will lack that supportive network, which will obviously deter them from achieving economic security.”

“We’ve portrayed a women’s economic engine as a bunch of interlocking gears. Each of these things can have an effect on the other things.”

Another determinant is identification, which can be a serious barrier not only for undocumented women, but women emerging from incarceration.

“When you come out of incarceration, you don’t just get handed your ID. You have to re-establish your identification, which is mindblowing to me,” Haghighat said. “So many things these days require identification, so that’s a huge barrier to getting housing, getting paid to work, all those things.”

A report from UMass Amherst School of Public Policy (SPP), released last month, revealed some of the impacts that the first year of the COVID-19 pandemic had on Massachusetts households. Led by UMass Amherst economist Marta Vicarelli, the team from SPP’s Sustainable Policy Lab surveyed more than 2,600 Massachusetts residents from October 2020 to February 2021 to gather information about the challenges households faced due to the public-health crisis and its socioeconomic fallout, and the strategies adopted to address these challenges.

The survey covered a wide range of topics, including employment and financial strains, childcare and education, physical and mental health, substance use, and food security. Vicarelli said the team’s analysis devoted particular attention to women, children, and minority populations.

“Our results shed light on the socioeconomic and health impacts of the COVID-19 pandemic in Massachusetts households across different socioeconomic groups,” she wrote. “Many of these impacts have been persisting throughout the pandemic. Special focus is devoted to delays in children’s academic and emotional development, negative mental-health outcomes, and negative effects on women’s employment. If not addressed quickly, these socioeconomic impacts will have lasting, and possibly irreversible, implications for the United States. We hope that our results will inform the design of policies that address these impacts and support vulnerable groups.”

Notably, the survey found that 31% of respondents saw a decrease in overall income and savings, and women were more likely than men to report having become financially dependent on their partner due to pandemic disruptions. Echoing the global Lancet study, female respondents were also more likely to indicate substantial changes in their professional life to support the needs of their households, such as keeping their jobs but working fewer hours, taking unpaid leave, leaving their job, or changing jobs.

“There’s a real concern about lost stability for retirement purposes,” Haghighat told BusinessWest. “And who knows what’s going on with the Great Resignation? Hopefully, women who have more flexibility are taking advantage of a better labor market to make up ground in terms of their jobs and so forth. Over time, we’ll see how that plays out.”

A 2019 Women’s Fund report called “Key Findings on the Status of Women and Girls in Western Massachusetts” highlighted the fact that women in Hampden County were underemployed and experiencing high rates of poverty. Since then, COVID-19 has complicated the issue, and the impact on women in Greater Springfield has disproportionately affected black and Hispanic women — often women concentrated in low-wage employment who were shut down for extended periods or were laid off entirely.

The 2019 report also emphasized barriers for formerly incarcerated women, positing that resources like affordable housing, debt relief, financial assistance, access to sober housing — especially for women — quick reunification with children and other family members, and continuity of therapy and recovery are greatly needed.

The next report will be a tale of how COVID impacted everything. That and the Women’s Economic Security Hub survey are necessary next steps in closing troubling gaps for women when it comes to economic security, Haghighat said.

“Who knows what’s going on with the Great Resignation? Hopefully, women who have more flexibility are taking advantage of a better labor market to make up ground in terms of their jobs and so forth.”

“And not just for us, but for area policy makers,” she added. “It’s important for them to take this lens to things — people quitting or not taking positions, not just because of pay, but because of hours, transportation, getting there. We want this framework for thinking about all the things affecting women. Then, employers can be more visionary about making sure the workplace or compensation package they’re creating really responds to the realities women are facing.”

She noted that federal lawmakers can get behind supporting physical infrastructure, like roads and bridges, but often balk at other forms of support, like a national early-childcare program that has come up for discussion in Congress before, but never went anywhere.

“I look at that as a huge missed opportunity,” Haghighat said — one of many that may one day be remedied as decision makers get a grip on the hard data that’s forcing too many women into hard decisions they shouldn’t have to make.