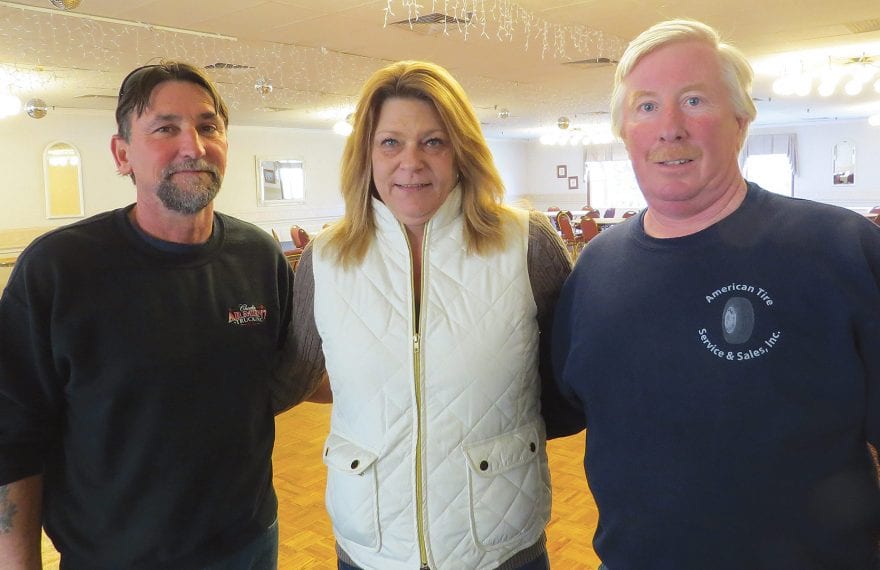 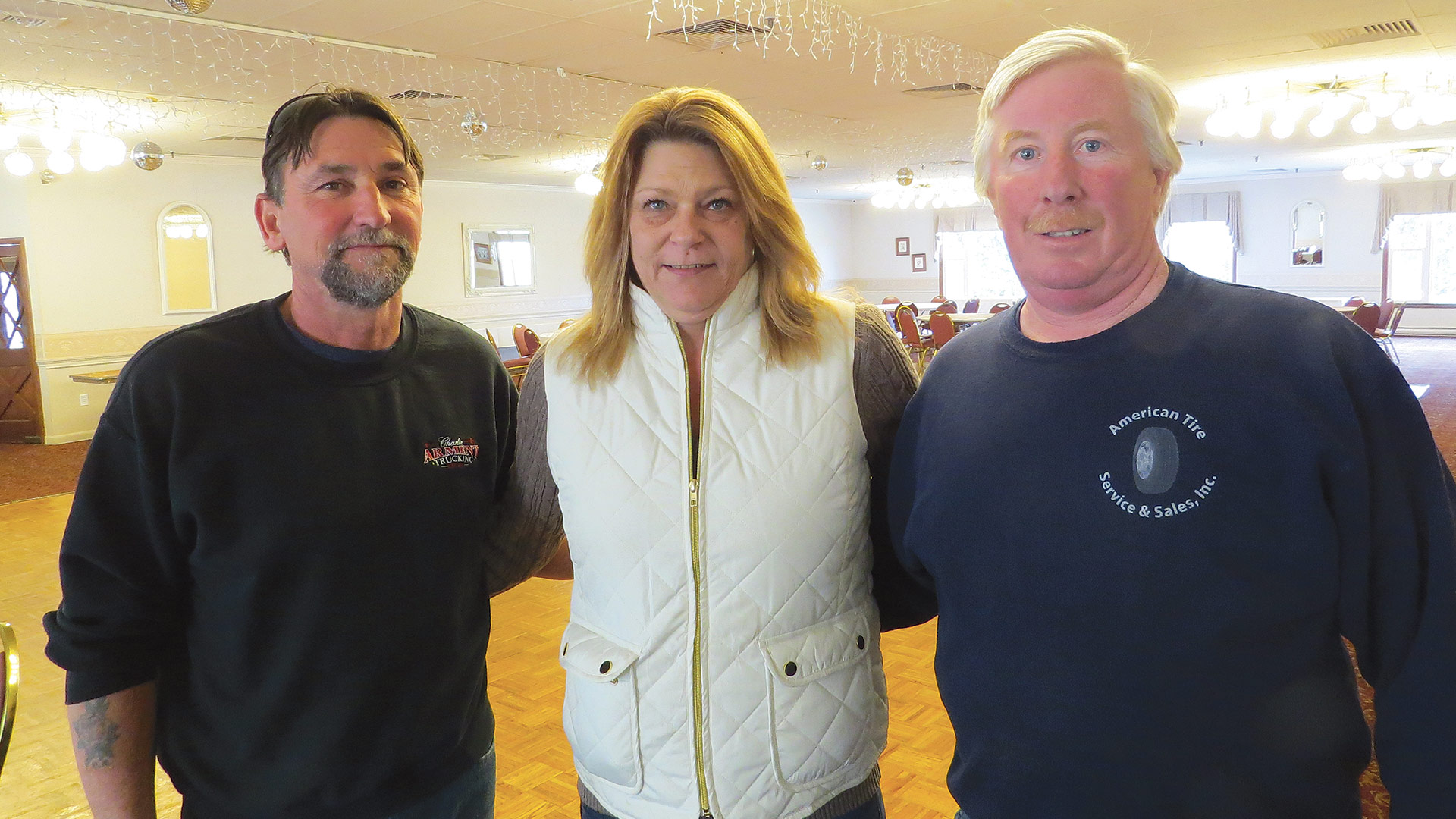 From left, Charlie Arment and Elizabeth and Bob VanZandt stand in the main ballroom at Wyckoff Country Club, one of its many facilities that have undergone a facelift.

None of the members of the new ownership team at Wyckoff Country Club in Holyoke had spent any time on the golf course — or in the golf business — prior to their acquisition earlier this year.

But they did know a few things about what they were getting into. Actually, more than a few.

Beyond that, well, they knew that there was still some history to be written at Wyckoff, originally known as Mount Tom Country Club, a Donald Ross design that has seen many changes over the decades and, like most all clubs, has suffered greatly in recent years as interest in the game has waned.

Most importantly, the new owners — VanZandt and his wife, Elizabeth, and Arment and his brother, William — who acquired the property from long-time owner Clarence “Clarky” Wojtowicz, understood that the golf business isn’t really the golf business anymore. Instead, it’s the entertainment and hospitality business, with golf as a big part of the equation, and they believe that Wyckoff, after some renovations and additions to the landscape, could certainly thrive in that environment.

“It’s more than the golf here — you have to diversify, which we did,” said VanZandt. “We’ll be able to make it because of the banquet facilities upstairs and downstairs, the kitchen, and the golf shop; it’s an attractive package.”

But it’s a package that needed some work, to be sure, and the new owners are supplementing their original purchase of the property — roughly 120 acres in total —with additional investments in both the course and, especially, the clubhouse, in an effort to capitalize on what they consider an attractive location (just off I-91 roughly halfway between Springfield and Northampton) and a solid foundation on which to build.

“No one wanted Wyckoff to go away. While some of the members had questions and concerns, this is what they wanted to see happen here — some improvements inside and out and attention to what the members wanted.”

Elaborating, VanZandt said the course — altered significantly by the construction of I-91 in the mid-’60s — is a hidden gem to many but certainly appreciated by members. Meanwhile, the main banquet facility is one of the largest in the region and can seat 470 for weddings and other events.

“There aren’t many rooms like that in this region — not many places where you can have a wedding or Christmas party or other event and host nearly 500 people,” he noted. “And there’s another room downstairs that holds 130 for bridal showers, brunches, and other events.”

Describing the work done inside to date, VanZandt and Arment said it involves modernizing and improving many of the facilities while also making some needed additions. Regarding the former, VanZandt started with a reference to a hallway on the lower level.

“This was all covered with green wallpaper — I think it was from the ’80s, but it might have been the ’60s; I’m not sure. Anyway, it needed to go,” he said, pointing to the bright white paint on the wall.

Meanwhile, a major renovation of the smaller, lower-level banquet room is underway, replacing wood paneling from several decades ago with a much more modern look. And just off a 19th hole that has been given a minor facelift, work is set to begin on a large patio that will be used by members and event attendees alike.

There are a number of events, said Elizabeth VanZandt, referring to everything from a recent St. Patrick’s Day dinner to planned brunches on Easter and Mother’s Day; from a Friday-night winter concert series to a tradition at Wyckoff known simply as ‘Wednesday Burger Night,’ a name that tells you all you need to know. 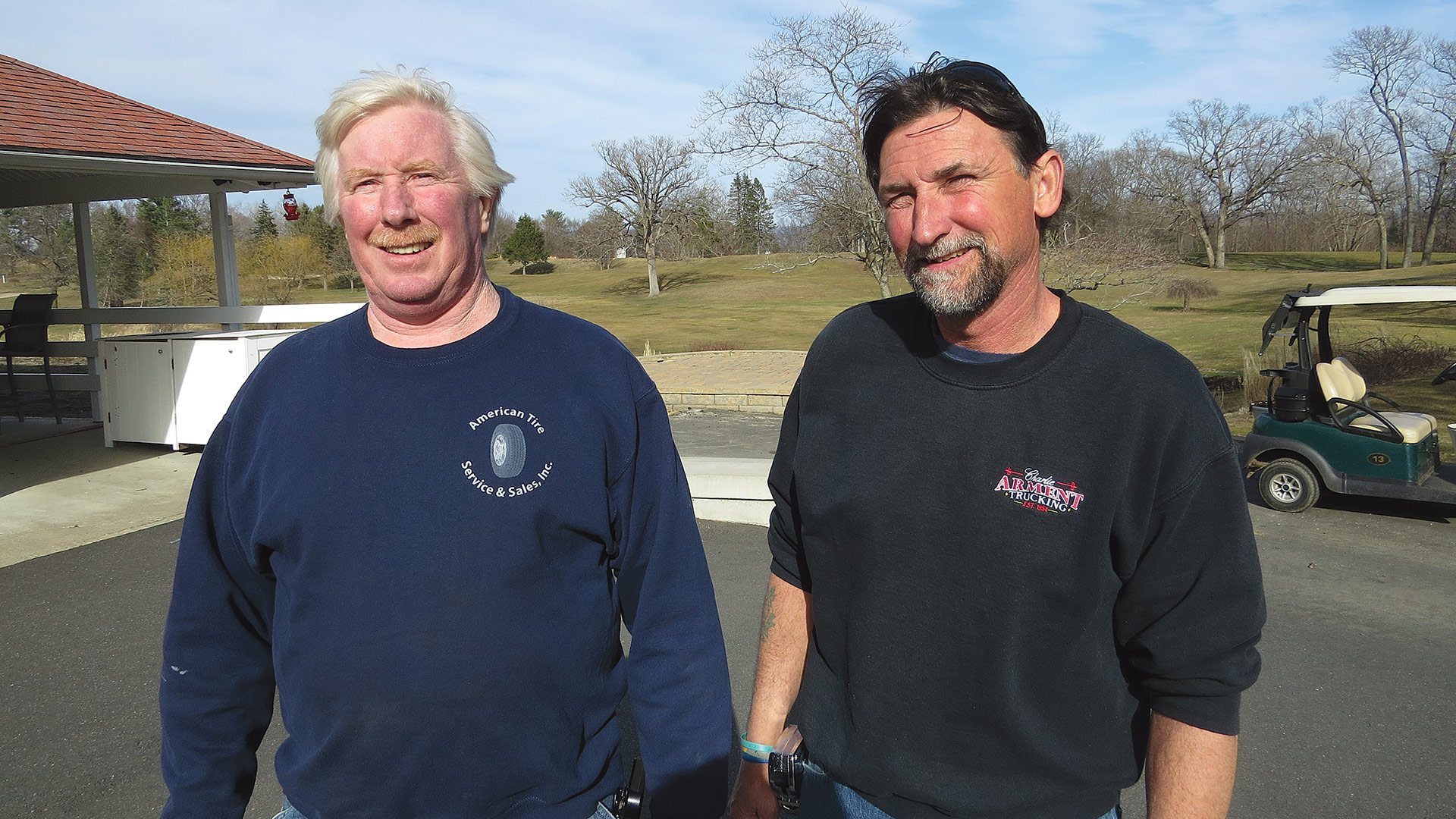 Bob VanZandt and Charlie Arment stand near a new patio that will soon be built at Wyckoff. 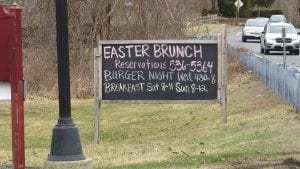 A sign of the times — literally; clubs like Wyckoff are now hosting a number of non-golf events to maximize revenues from their various facilities.

Meanwhile, on the course, Charlie Arment Trucking, which has done work on several area golf courses, has started on a number of projects at Wyckoff. Plans call for repairing sand traps, cleaning up ponds, renovating cart paths, clearing overgrown brush and trees, and restoring the ‘Wyckoff Country Club’ sign visible from I-91.

“The course was in pretty tough shape, but we’ve had people out cleaning it and getting it ready,” said Arment, adding that, while there was a soft opening in late March, the course will not be officially open until the end of this month, with the first tournaments scheduled for early May.

Summing up their plans, the new owners said they plan to continue things as they have been for the past 60 years or so — but, as noted, also make some much-needed improvements and additions. They knew considerable work was needed, but wanted to hear from members about what they thought, and received generous amounts of feedback at a meeting early this past winter.

Moving forward, the new owners plan to be aggressive in getting the word out about Wyckoff through some targeted marketing, and they said that word-of-mouth marketing has already generated a solid response.

Membership that once exceeded 400 is now closer to 150, and the new owners obviously hope their investments and ongoing work to get the message out will bring that number considerably higher.

“No one wanted Wyckoff to go away,” Arment said. “While some of the members had questions and concerns, this is what they wanted to see happen here — some improvements inside and out and attention to what the members wanted. We’re seeing very positive feedback — a lot of past members are very interested in getting involved again.”

If this trend continues, then a course with some rich history can continue adding new chapters to that discourse for decades to come.