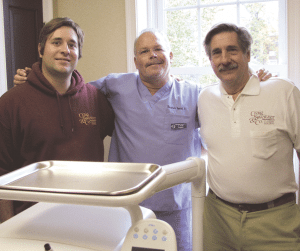 Craig Sweitzer’s company has built more than 75 medical and dental practices over the past 30 years. The first of those clients — Baystate Dental — is also the most recent.
BusinessWest recently sat down with both Sweitzer and Dr. Kevin Coughlin, owner of Baystate Dental, at the practice’s 10th location, which opened last week in a restored house in downtown Westfield. Craig Sweitzer & Co. has built the last nine of those offices, with two more planned for the near future, and the two men have shared what they call a rewarding professional partnership over the past three decades.
The story begins in 1983, when Coughlin was getting ready to take over Baystate Dental from its founders, Drs. Gabriel and Milton Auerbach.
“As they retired, I felt it was necessary to renovate and expand, and I knew what I wanted to do — I just didn’t know how it could be done and who could help me do that,” Coughlin said. At the time, Baystate Dental operated at just one site, on Main Street in Springfield.
“At the time, my dad, my father-in-law, and I attempted to renovate that initial practice, and realized we were out of our domain. We needed an expert contractor, someone we could trust and someone we could hopefully grow with over the years.”
He was introduced by a mutual friend to Sweitzer, who was in a similar position — that of wanting to broaden his business beyond residential projects and professional buildings.
“We did office renovations, and Kevin was the first medical job we did,” Sweitzer said. “It was fascinating. In a dental office, there’s so much plumbing and medical piping, mechanical piping, medical gases, X-rays — it’s so much more complex, and it keeps you thinking. It was a lot more fun — and it’s still fun 30 years later.”
He’s seen plenty of advances in medical-office construction over the years. “The equipment has changed. We no longer need to use lead-lined sheet rock, and everything is more gentle, more comforting for the patient, and less clinical-looking, although the technology has just advanced in leaps and bounds.”
Coughlin jokes that he might not have hired Sweitzer if he had realized just now inexperienced the builder was in the medical-dental field, but he’s glad he had no misgivings at the time.
“I immediately liked him, trusted him, and believed in him,” Coughlin said. “He set out with plans and designs to renovate that initial practice, with the goal that we wanted to give our patients not just a warm and wonderful atmosphere, but efficient, effective, state-of-the-art care in that welcoming atmosphere.
“With the combination of his building expertise and knowledge, and my knowledge of medicine and dentistry,” he continued, “we’re now pushing toward 12 dental practices in Western Mass.”

Family Ties
The history of Baystate Dental is the recent history of two families. When Joyce Mercadante was growing up in Agawam, her family befriended the Auerbach family; later, two of the Auerbach children, Gabriel and Milton, would go on to become dentists, and the Mercandante family became early patients of the new practice in Springfield.
Mercadante later married Ralph Coughlin and had two sons, whom the Auerbachs encouraged to enter the field of dentistry. After part-time and summer work in the Baystate Dental lab during high school and college, Kevin enrolled in the dental program at Tufts University School of Medicine. He returned to the region and the Auerbachs’ practice, gradually broadening his responsibilities, helping the practice expand into evening and Saturday hours.
After Coughlin took over the practice in 1983, he embarked on an ambitious expansion plan and, in 2003, added two partners in Drs. Gary Circosta and Matthew Haluch. The practice now employs 120 staff members, including 18 dentists, at its 10 locations, making it the largest private dental practice in the state.
Sweitzer’s emergence in the construction field started equally humbly. “I actually owned a furniture business before I graduated college — designing, building, and selling furniture in East Longmeadow,” he told BusinessWest. After that, he went to work for a general contractor for a couple of years before setting out on his own with small projects, mostly kitchens and bathrooms.
“That evolved to additions, which evolved to new homes,” he said. “That was fun, but after 15 houses, it’s just not as challenging anymore. And residential work is really susceptible to ups and downs in the economy.”
So he gradually moved into commercial work, particularly office construction, before trying his hand with medical facilities. Eventually, he left residential building behind completely. As a small company, “I really can’t do both and serve those customers. Building a house takes six months, and when a doctor calls us up and wants an office built, he wants it started next week, so we can’t say, ‘come back and see us in six months.’ So we went to all commercial.” 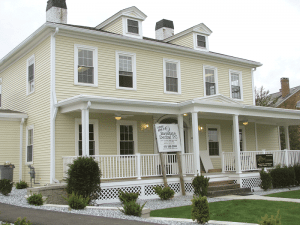 The new Westfield office is the first Baystate Dental practice to occupy a remodeled house.

His long-standing professional relationship with Coughlin has included building new dental facilities in Springfield, Belchertown, Chicopee, East Longmeadow, Longmeadow, Ludlow, West Springfield, Westfield, and Wilbraham. Baystate Dental’s other long-time partner is Patterson Dental, a national resource for equipment, supplies, and expertise in industry trends.
“With each project, we continue to find things to improve from the previous project,” Coughlin said. “And I trust him, so I don’t have to be there every week worrying, ‘is this getting done?’ It’s an enormous benefit to have that relationship, almost like a family member, where I don’t have to worry about it.”
Sweitzer agreed. “Our goal is to do the best possible project with the best possible products for the money. I know what Kevin wants; I don’t have to call him all the time. He trusts in me and gives me the confidence to make decisions I think are best for this practice.”
For example, at the new Westfield office, Sweitzer became concerned about the way the ceiling tiles in the operatories, or procedure rooms, reflected sound. Feeling that it created too loud an environment, he researched materials and softened the noise.
“I’m not always concerned about the best value or what’s easiest to build,” he said. In the case of the ceiling tiles, “we knew what we wanted, so it was easy for us to switch gears during construction without getting the architects or the designer involved in a big series of endless meetings.”

That’s a Mouthful
Coughlin said the dental public demands much more than it used to, both in technology and a pleasant practice environment.
“People want the best value, the best care, and the best service in the best surroundings,” he said. “But in the end, what they want is to trust their provider, and that comes from their first impression, what the facility looks like. Is it too glitzy, over the top, cold, and impersonal? Is it private?”
The look of a practice is just the beginning. “Thirty years ago, most practitioners wore no masks and gloves, no surgical scrubs. Infection control was almost non-existent,” he recalled. “Privacy matters, like with HIPAA, weren’t even an issue. Today, all of these things are not just important, but necessary.”
Sweitzer said the Westfield site reflects a commitment to both aesthetics and substance. “If you look in each of these operatories, the windows overlook a landscaped area, there’s soft music, everything is brand-new, extremely clean, extremely comfortable. Yet, behind the patient’s head is the most modern equipment imaginable — the most modern X-rays, medical gases … these operatories really do just about anything.”
Likewise, Baystate Dental has strived to do almost anything to get treatment to patients, providing services at home for non-ambulatory individuals and offering a broad range of sedation options even for routine treatments.
“Thirty-five percent of people refuse to see the dentist out of fear, and another 15% for financial reasons. That’s 50% of the marketplace that’s avoiding you,” Coughlin said. “By creating an efficient, effective environment and by offering these medical gases — oral sedation, inhalation sedation, intravenous sedation, or anesthesia — we can take these patients who have high anxiety and give them a level of care they don’t normally expect or get.”
He cited one boy with severe autism who was non-verbal and could not tolerate a normal dental setting and had to be sedated. “This young man hadn’t had dental care in 14 years. Who provides that care?”
But both Coughlin and Sweitzer couldn’t help but come back to the design of the new Westfield office — the first Baystate Dental practice in a renovated house, not a new building.
That wasn’t the original plan; the project was originally drawn up and approved as a new, three-story, 30,000-square-foot building with a footprint extending very close to Broad Street. But they decided a remodel of the original building was sufficient for the practice’s needs and blended much better with Westfield’s reconstructed downtown. “Everyone who goes by here, they love it,” Sweitzer said.
Added Coughlin, “I don’t think this detracts at all from the center of Westfield, and I think it actually adds to it. People know we could have done something else, but we took what I like to think is the higher ground.
“At least once a week,” he continued, “we get a nice personal letter from someone in this town I don’t know — hopefully they’ll become patients — who are thrilled with what we’ve done.”
“That’s where the fun of construction is,” Sweitzer added. “We’re not building a sterile high-rise with glass and concrete, but recreating something that you can really be proud of.”
Indeed, while state-of-the-art technology is critical, after 30 years and 10 offices — with more on the way — Coughlin doesn’t underestimate the power of a welcoming atmosphere.
“We have roughly 56,000 patient visits a year across all our locations, and we’ve never had anyone say anything but, ‘this is one of the nicest dental offices I’ve ever been in,’” he told BusinessWest. “That’s not just for the aesthetics of it, but the intangibles — the layout, the efficiency. I often get credit for it, but honestly, the credit should go to the construction company.”
As befits their mutually beneficial relationship, he and Sweitzer are happy to share the credit.