Ask Wilbraham Selectman Bob Russell what his town’s main business is, and he’ll tell you: quality of life.

The town of nearly 15,000, located about 12 miles northeast of Springfield, has an abundance of protected open space, parks, recreation facilities, and other features that can be enjoyed by its residents, and a small-town feel that hearkens back to its origins as a close-knit farming community.

“It’s a bedroom community,” Russell said, and townspeople revel its neighborly activities, like summertime concerts and community-wide flea markets held at Fountain Park, gatherings of moms and dads and their young charges at the popular Wilbraham Children’s Museum, coffee klatches at the newly renovated Rice Fruit Farm, or swimming and splashing at the town’s ‘backyard beach’ at Spec Pond, just off Boston Road.

But things aren’t all sunshine and smiley faces: As residents enjoy the pleasures of living in a small, at times sleepy community, he said, there are real-world concerns, many of them economic, that need to be addressed: For example, Wilbraham has seen some erosion of its economic base over the past couple of decades, as businesses have closed, leaving vacant spots in the town’s two main areas of commerce — along Boston Road and in the town center.

Russell says this is something the town is working on, and he hopes to fill in those gaps with businesses that are carefully selected to blend with the town’s character and charm.

“New businesses can be a win-win for the town: they bring in tax revenue, but generally don’t overly tax the town’s resources. They don’t put a demand on the school system, they generally don’t require police calls, and they don’t generally catch on fire,” Russell said. “It’s a good value when we bring business into town, and we’re very much aware of that.”

Although some residents say they like the relative quiet of the underused business district in the center of town, Planning Board Chairman Jeff Smith says he’d rather see the hustle and bustle there that he recalls from his youth.

“When I was a kid, growing up here, I’d ride my bicycle to the town center — my dentist was right there in a building that’s unoccupied now,” said Smith, a lifelong resident of Wilbraham. “My pediatrician, the post office, orthodontists, banks — it was all right there. But these buildings are vacant now, and it’s been quiet.”

There are projects in the works in the center of town, at the intersection of Main and Springfield streets, Russell said. Developers have purchased a number of small properties there that they propose to fill with businesses on the first floors and apartments on the second. That will necessitate a change in zoning, from strictly business to mixed use — a proposal that will be brought before a special town meeting in October. If it passes, “it will make the center of our town a lot nicer than it is right now, from a design standpoint,” said Russell, adding that property values will go up.

On Boston Road, another important business district for Wilbraham, things are also happening. While Friendly’s Ice Cream has long had its corporate headquarters there, there’s a new Balise Ford dealership, a remodeled Lia Toyota dealership, a Home Depot, and a Big Y Supermarket. Also, a new transfer station for trash is about to reopen in a spot that’s been unoccupied for some time — and that, Russell said, will be good for the town.

“There will be an improvement for the building, we’ll have a discount for our own tipping, and the town will enjoy a tipping fee. This is a revenue strain that doesn’t come from the residents’ tax bills.”

Even with all that, there are still vacancies on Boston Road waiting to be filled, and Smith says the Planning Board is looking at a number of ways to address them, including adjusting the zoning bylaws to accommodate some types of businesses that haven’t been allowed to open in town for several years.

“We’ve had moratoriums on certain things because the architects of the town have wanted it to look a certain way — the idyllic New England town,” Smith said. “They didn’t want gas stations, and they didn’t want used-car lots.” But now, the Planning Board is suggesting that some of those bans be lifted.

Chalk it up to changing times, he said.

“When Boston Road was laid out, it was with the mindset that there would be some service facilities and a lot of retail opportunities, but those retail opportunities are dwindling,” Smith told BusinessWest. “Look at the UPS and USPS trucks on Boston Road right now — it’s all Amazon deliveries, and that has changed the retail potential in areas like Wilbraham. We’ve had to adapt the zoning accordingly to go along with the changes.”

Wilbraham at a glance:

As a result, he said, the Planning Board will propose that the town allow limited and restricted opportunities for gas stations in its commercial zones. The same holds true for used-car sales. But, he stressed, everything will be brought before the voters, who always have an opportunity to weigh in on the board’s proposals.

“I always tell people, ‘we’re your Planning Board, and these are your bylaws,’” Smith said.

One thing residents are not likely to see on Boston Road are big retail chain stores, because there simply isn’t enough traffic to support them.

“In our small-town way of thinking, we see it as a really busy road, but in the scheme of busy roads, it’s not that busy,” Smith told BusinessWest.

As the town continues to rethink its position vis-à-vis business, Russell says, the Select Board is considering the possibility of establishing an economic-development committee.

“We’re looking at ways to bring as much of the town’s resources to bear as possible to improve development,” he said. “It’s something we’re all focusing on.”

Indeed, the town’s economic health is something that’s long been a priority for the Planning Board, Smith said.

“We see the people who come to the town and want to locate businesses here. If we don’t have zoning for what they want to do, but if it seems like it would fit in Wilbraham, we say, ‘OK, maybe we should add a provision in our bylaws.’”

But that can be a lengthy process, he added, which can take up to a year, by the time residents vote at a town meeting and the town secures the state attorney general’s mandatory approval.

A case in point: recently, a local brewery considered relocating to Wilbraham, but the town didn’t have zoning in place that would allow it. So the Planning Board developed zoning, and it was approved at town meeting. But by that time, the company had decided to stay where it was. Smith says the effort will not be wasted — the town can move quickly the next time a brewpub or microbrewery expresses an interest.

“Others have approached us,” he said. “Now the zoning is there.”

In other cases, the town has gotten a jump on zoning changes even before interest has been expressed by potential business owners. For example, after imposing an initial moratorium on the establishment of registered medical-marijuana dispensaries (RMDs) — a time used for review of federal and state laws — voters decided to allow such establishments.

“We did put zoning in, subsequently, in an industrial zone,” Smith said. “But, to be honest, I didn’t think anyone would want to locate an RMD in the town of Wilbraham.” So far, he says, he’s been right.

And, just to be clear, he added, recreational marijuana establishments are still prohibited in town.

It’s important to note, Smith says, that the town’s elected officials rely on Town Hall experts, like Planning Director John Pearsall and Building Inspector Lance Trevallion, to help them with their duties.

“There’s a lot to learn, and our decisions have legal ramifications,” he said. “We’re guided by these town officials.”

As Smith and Russell see it, revitalizing Wilbraham’s business base is an ongoing process — and one that must be responsive to both the changing economic realities and the wishes of its residents.

That said, Russell added, “Wilbraham is open for business.” 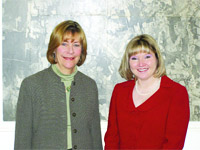