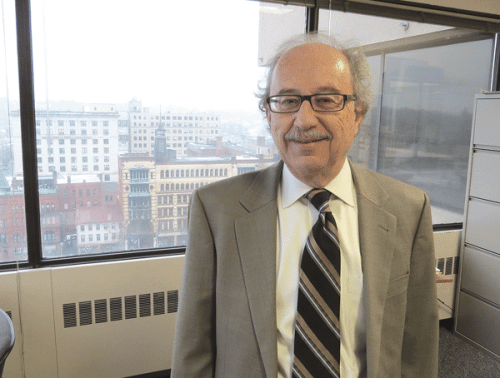 Attorney Gerald Berg in his new office at 130 Main St. in Springfield. In the background is 95 State St., his former business address.

It was from MGM Springfield, and it essentially informed him that he had to vacate his offices at 95 State St. in Springfield, inside the footprint of the planned $800 million casino complex, within 30 days.

He was expecting such a missive — as well as that time frame — and basically knew he would have to find new quarters once the election returns started coming in last Nov. 4 and it became clear that voters would reject a referendum question that would have effectively ended the casino era before it really got started.

So Berg, who specializes in real-estate and domestic-relations law, started looking for a new mailing address within days of the election. He briefly considered leaving downtown Springfield after spending nearly four decades in a succession of offices at 95 and 101 State St., but eventually concluded that he still wanted to be within walking distance of the various courts and the Hampden County Registry of Deeds just down the street.

What’s more, he feared that casino construction and pending repair work on the I-91 viaduct would make parking in the vicinity of the court complex a nightmare, so he passed on the suburbs.

He looked at several locations in the central business district, experienced some mild (but, again, certainly expected) sticker shock as he looked at certain properties, especially the Class A buildings, and eventually settled on 990 square feet in 1350 Main St., a.k.a. One Financial Plaza.

“It’s a nice spot,” he told BusinessWest. “It’s good space, I’m on the 11th floor, we have a nice view, we face southeast, so we get the sun … things worked out well.”

With those comments, Berg is truly representative of what has transpired since the election and during the great commercial-real-estate shakeout prompted by MGM’s pending transformation of Springfield’s South End. The shuffle isn’t officially over yet, but most of the dust — at least the immediate fallout from MGM’s property acquistions —has settled.

And while this wasn’t exactly a seismic event, it has had a definite impact on the downtown market, in terms of filling some long-vacant space and bringing a dose of stability to rates when, by most all accounts, some was needed.

“There’s still a good amount of office space left in downtown Springfield,” said Doug Macmillan, president of Macmillan & Son Inc. “But this has done a lot to stabilize rents; it’s put something solid under lease rates that had been vacillating and floating up and down for years.”

Evan Plotkin, a principal with NAI Plotkin and co-owner of 1350 Main St., agreed, and said MGM’s movement into the South End and the forced relocation of several commercial tenants helped improve an occupancy rate that had been lagging for the better part of the past 15 years and certainly since the economic downturn.

“It’s great for the market when you can absorb office space when we’ve had chronically high vacancy rates in the Class A office market, as well as Class B and C,” he explained. “There’s long been a glut of office space downtown, and that’s why I’ve been against the development of new space.”

But while most everyone forced to relocate by the casino project has found a new home or is close to doing so, the overall impact from the MGM project downtown may be far from over.

Indeed, Kevin Jennings, owner of Jennings Real Estate, who has placed — or is placing, to be more precise — several of the impacted businesses, says he’s seeing heightened interest downtown from those not in the official casino footprint.

“I don’t think we can look at it purely in terms of those who needed to be relocated,” he said. “I think there’s activity in addition to those parties, a heightened interest in downtown overall.”

For this issue and its focus on commercial real estate, BusinessWest looks at what’s transpired in recent weeks — and might happen next — as the casino era enters a new and intriguing phase in Springfield.

Macmillan called it “an interesting footrace.”

That’s how he chose to describe the past four months or so, or since the fate of the referendum question became clear.

What that vote did was send dozens of commercial tenants — a slew of lawyers, a few nonprofit agencies, Springfield’s Office of Health & Human Services, and the Hampden County Alcohol Correctional facility, among others — looking for new quarters into a greatly accelerated process of acquiring space.

“It’s been interesting because many of them had a demanding timeline to meet,” he explained. “It was ‘here’s your notice; you have less than 90 days to get out.” 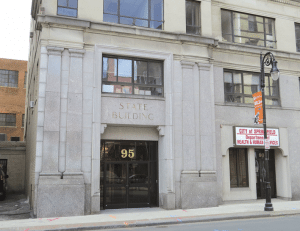 Tenants in 95 State St., most of them attorneys, were among those who had to relocate to make way for MGM Springfield.

The lawyers, spread out across 73, 83, 95, and 101 State St. — long-time homes to the legal community because of their proximity to the court complex and Registry of Deeds — all faced the same basic questions. These involved whether to stay downtown, and, if so, where.

Some did go to the suburbs — Macmillan said he placed a few in surrounding communities — but most chose to stay in the central business district (CBD), and for those reasons listed by Berg.

There were some incentives offered by MGM to do so — $3 per square foot to stay in what’s considered downtown and $4 to remain in the CBD (generally considered to be the stretch between the Arch and State Street) — but Travaun Bailey said that was not a real consideration in his decision to relocate his office at 83 State St. to 1350 Main.

He was swayed more by convenience and parking, and that’s what prompted him to grab nearly 3,000 square feet on the third floor, a large portion of which he’s subleasing out to several other lawyers.

“We had a conversation about moving out of downtown, but it wasn’t seriously considered, said Bailey, who specializes in criminal defense, personal injury, and family law. “We wanted to stay close to the courts.”

Overall, 10 lawyers landed in 1350 Main, the Class A building closest to the court complex, together occupying nearly 8,000 square feet on three different floors. Others touched down in 115 State St. (a.k.a. the Clocktower Building), the Colonial Block further south on Main Street and across from the casino site, as well as Monarch Place, Tower Square, the TD Bank Building, and the buildings between Harrison Avenue and Falcons Way.

“Almost every building downtown has benefited from these relocations, in addition to those coming in from outside the market,” said Jennings. “It’s just been a real healthy shot in the arm for downtown.”

Some of the displaced entities are still looking for homes, including a few law firms, HHS, and the correctional facility, but much of the shakeout is over.

However, the overall activity level remains high — or at least higher than it’s been for much of the past 10-15 years.

Jennings said he’s been talking with interested parties about space in Harrision Place, including the long-vacant and highly visible ground floor, and to others, including a restaurateur, about storefronts along Main Street.

Meanwhile, Plotkin said he’s showing space at 1350 Main to a number of prospective tenants, including an insurance company, an entity specializing in shared office concept, and others.

Both attribute at least some of this interest to the casino and, more specifically, the interest they believe it is generating in Springfield and its downtown.

“There’s a new optimism concerning Springfield,” Plotkin said, choosing that word carefully. “And much of it stems from the building of this resort. Forget for a minute that it’s a casino as well, which is a huge draw; this is a resort, a destination resort, and one that will bring 8 million visitors a year to Springfield. The spinoff and benefit from that tourism and that activity in the downtown is huge.

“There’s been a lot of interest in downtown office space from some of the large real-estate search firms, the site selectors that are looking at space for clients based outside of the area that are looking for locations in different markets,” he went on. “And Springfield is one of them.”

“We’re showing space to a lot of interested parties, and it runs the gamut, from restaurants to professionals,” he told BusinessWest. “It’s an exciting time for Springfield.”

Meanwhile, Plotkin believes the destination resort that will be MGM Springfield will have an impact throughout downtown, not only in the direct vicinity of the casino’s footprint, including Pynchon Park, Union Station, Stearns Square, and other landmarks.

“Now that there’s new optimism and a new direction for downtown — and more money available to do these kinds of things — I see lots of positive things happening,” he said.

In other words, the impact downtown will likely extend far beyond the recent game of musical chairs. 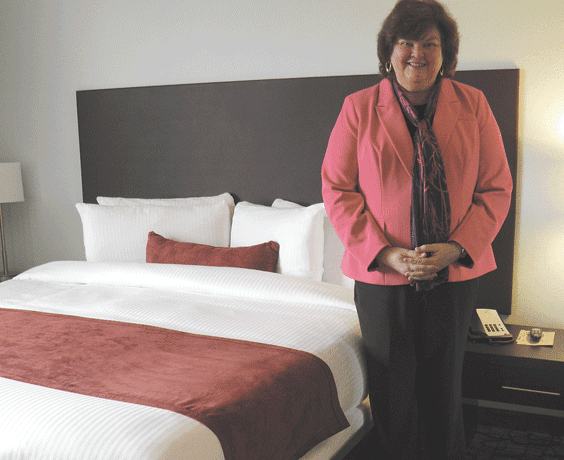