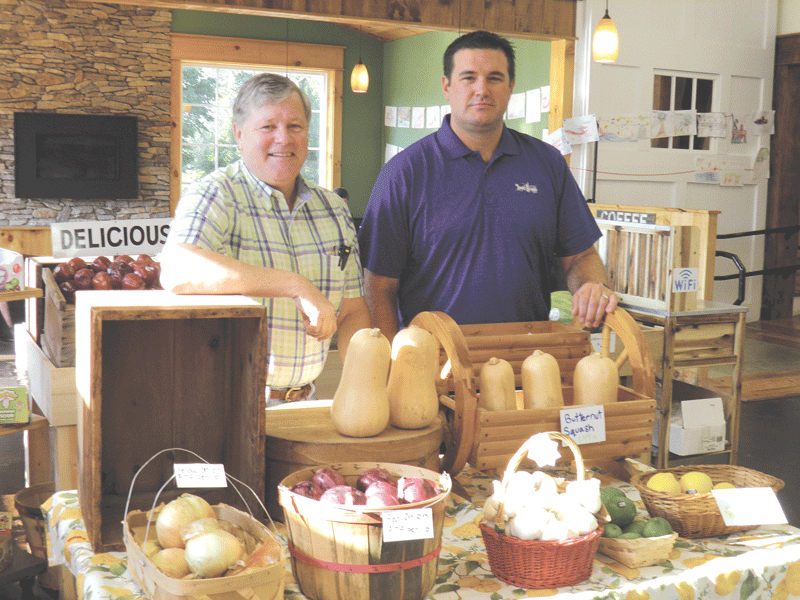 Bob Russell and Jeffrey Smith say new zoning was created so Rice Fruit Farm could reopen after sitting vacant for four years, one of many positive developments in the community.

Bob Russell grew up in Wilbraham and has spent most of his life in the town. The selectman is proud of his community and cites work by officials that encourages business growth while keeping a close eye on retaining and expanding the vast amounts of open space and recreational opportunities that can be found on walking and hiking trails crisscrossing the community’s 22 square miles.

He told BusinessWest a 50-year-old time capsule was recently unearthed that contained a statement by town officials who predicted the population would rise to 40,000 residents. “It is significantly less, which speaks to responsible planning and management,” Russell said. “We are not completely built out like some other towns.”

Jeffrey Smith concurred. “We allow for responsible growth and development, particularly in our business districts, which include the town center and Boston Road,” said the chair of the Planning Board. “There are opportunities to construct new homes on single lots and in new subdivisions as well as condominiums. But we put a high value on open space and recreation.”

This value statement was reiterated by Selectman Susan Bunnell.

“We’re in the early stages of another wave of economic development, and informal discussions are taking place between the Select Board and business leaders about how to proceed,” she noted, adding that the state brought fiber-optic cable into the town via the Mass Broadband Initiative activated in the spring, and a committee is exploring whether to expand it because it is currently limited to town buildings and schools.

“We have a municipal light plant that was created last year and are positioned to move to the next level, but we have to determine how to move forward; fiber-optic cable is something businesses have a need for, but any expansion would be done in a measured manner,” she told BusinessWest, adding that she recently attended a statewide seminar on the topic.

But officials also tout the large amount of available space for new businesses and cite potential for success, because much of it is concentrated on the busy stretch of Boston Road that runs through town.

“We have good access to state highways and the Mass Turnpike and good utilities; high-quality water from the Quabbin and adequate sewer capacity,” said Planning Director John Pearsall.

Smith added that Dunkin Donuts just completed a major renovation and expanded its parking lot. “They worked with the Planning Board to come up with a good design,” he recalled, adding that Lumber Liquidators next door has done well, as has the new, $5 million Balise Ford dealership built two years ago.

“There is also a textile mill on Cottage Street off Boston Road under new ownership, and we are in discussion about potential new uses for it,” Smith said, noting that the 200,000-square-foot building sits on 10 acres.

For this issue, BusinessWest continues its Community Spotlight series with an in-depth look at Wilbraham and its ongoing balancing act.

Wilbraham officials say the town welcomes new business, and zone changes are made on a regular basis to accommodate growth.

“Changes were recently passed at the annual town meeting to allow for more retail business in two zones in the center,” said Russell. “They were combined, which will allow properties to be used for retail sales and food-based operations where they could not be established before.”

Pearsall added that the town has a long history of changing its zoning to allow for development, and pointed to the engineering firm FloDesign as an example.

“It was built on abandoned property that was zoned residential; we developed new zoning to allow it to be reused for a business, but were sensitive to the fact that it is surrounded by a residential area,” he told BusinessWest. “It’s the norm in Wilbraham to make adjustments and tweak things to adjust to the changing business climate.”

New zoning has also been put in place for two solar farms. One is permitted at the former landfill, while the second is under review and would be built on private land. “Plus, we constantly approve requests for new residential solar systems,” Smith said.

The iconic Rice Fruit Farm reopened in April, thanks to specific zoning changes created to allow for an adaptive reuse of the property, which includes a farm stand, a food-service operation, and some retail.

“The 100-year-old farm is a landmark in Wilbraham and had been vacant for four years. But the Maloni family came to us with a vision to renovate the existing buildings and create a viable business that would become part of the community, and the town worked with them to make it happen,” Smith explained.

Russell said the opening was well-attended, and residents are glad to see the property brought back to life. “We created a heritage-farmland bylaw to make it happen, and an antique store opened on the property about a year ago.”

The town also allocated $100,000 last year for improvements to sidewalks on Main Street, and hope to expand the project. “The new sidewalks run right past Rice Fruit Farm, and the changes are consistent with items outlined by the Vision Task Force,” Russell said, referring to a 2013 document titled “Wilbraham Looks Forward,” which took residents’ opinions into careful consideration.

Russell says the open space in Wilbraham is one of its main attributes and must be preserved.

“In 2008, Money magazine listed us as one of the best towns to live in, and one of the main factors was our access to open space; there are contiguous hiking trails from one end of town to the other, and we are constantly working to improve them,” he explained. “The town has continued to purchase land when it becomes available, despite the fact that the state cut back on reimbursements.”

To that end, Wilbraham recently approved the new position of land-management coordinator, an official who will inventory all vacant land and work to improve access and recreational opportunities throughout the community.

“Some of the land is under forest management, and we have received money from the sale of timber, which is used to make improvements,” Smith noted.

Officials said the tornado, microburst, and October snowstorm in 2011 pointed out the need for preventive maintenance, and Wilbraham is hosting an annual conference next month for municipal officials, foresters, land trusts, and other groups, which will offer local, state, and regional perspectives on town forests and take participants on a field tour of the community’s forestland to highlight methods and results of sustainable management.

Officials also noted there has been a decided uptick in residential building in the past year.

“The Planning Board recently approved a zoning change for 11 single-family homes in a development that will be called Falcon Meadows,” said Smith. “The land was home to the former Bennett’s Turkey Farm and has sat empty for more than a decade.”

Another subdivision, called Westminster Court, is in the preliminary planning stages and will have seven to 10 lots. Meanwhile, a subdivision known as Carla Lane, which was approved three years ago, is entering Phase III of development. In addition, four lots are still available in the Washington Heights subdivision.

“Building has increased in the past several years, and a number of new townhouses are being built at the Gardens, an over-55 community,” said Building Inspector Lance Trevallion. “Fourteen new single-family building permits have already been issued this year, and I can foresee 15 more by the end of the year.”

He added that the town has a very active and vibrant community garden on a 300-acre parcel of land that is under forest management, and a new greenhouse was just built with Community Preservation Act funding.

In addition, ground has been broken for a new, $8.2 million police station on property adjacent to the fire station, which will be paid for entirely by the town.

“The residents voted for a $4.2 million debt exclusion,” Russell said. “The rest of the cost will be paid out of available funds and bonding capability within the Proposition 2½ levy limit. The cost for the average home will be $78 on the tax bill the first year, which will decline to $49 in year 15 of the bond.”

The Vision Task Force deemed maintaining the beauty and vibrancy of the town important to residents, and although it’s too early to tell how the MGM Springfield casino will affect Wilbraham, officials signed an agreement that provides the town with $100,000 per year for 15 years to mitigate any impact. In addition, Wilbraham will receive a $100,000 consultant fee in the casino’s first and fifth operating years to examine whether the financial repercussions total more than $100,000.

“It is foolish to try to predict the future. But town officials and department heads have created a baseline on our traffic, water, and sewer use,” said Russell. “We will re-measure these things in the future; it’s important because part of the town uses the same sewer line as Springfield, and we get a good portion of our water from Springfield and the Quabbin Reservoir.”

Russell likes everything about his hometown.

“It is only getting better, and college graduates who grew up here tell us they hope they can afford to raise their children in Wilbraham. We used Community Preservation Act money to revamp the Children’s Museum this year, and Sevey Park is being completely re-landscaped. Our teacher-student ratio is very low, and we have a new, $63 million regional high school,” he told BusinessWest, listing attributes that appeal to families.

“In the last two years, we have not fully exercised the tax-levy limit under Proposition 2½, despite the fact that we have increased our savings and funding for other post-employment benefits for former town employees,” he added. “We have a lot to be proud of, but it’s all about balance — and our citizens consistently vote to develop and grow in a very responsible manner.”