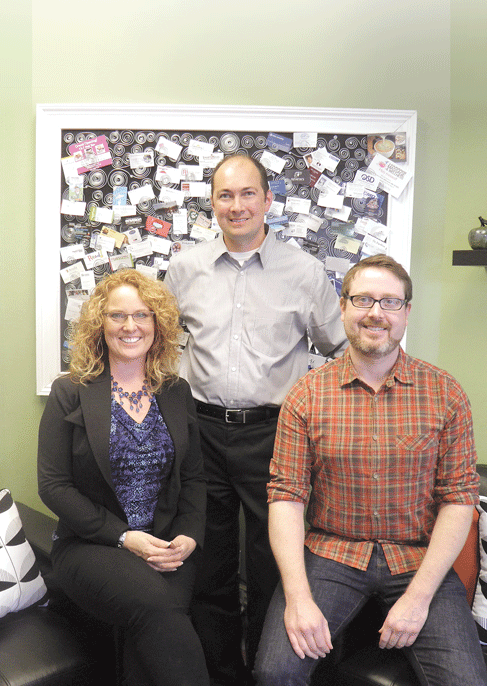 Amy Scott and her team at Wild Apple Design Group say technical expertise is a must when designing websites that engage customers, but so is an element of “surprise and delight.” The goal, she insists, is to create relationships with clients that are transformational, not transactional — and fun to boot.

Their names are Betti, Bill, Flamm, Polli, Enno, Saggo and Schnulli, and more than 2.5 million of the plush characters, with zippered mouths that allegedly ‘eat’ a child’s worries when they are written down and fed to them, have already been sold in Europe.

“Let us carry your worries so you don’t have to,” they shout on their newly developed website, which includes a video in which a worry eater banishes a little girl’s fear that a monster is lurking under her bed.

The website launched earlier this summer, and purchases can be made on an e-commerce shopping cart, thanks to Wild Apple Design Group in Wilbraham, which was hired earlier this year to introduce the toy to the North American market by the Haywire Group, a Springfield-based game designer and manufacturer.

The result is not only endearing, it earned the company marketing awards from the Advertising Club of Western Massachusetts. Wild Apple was recently feted as a Silver winner for consumer-product website design in the Summit Creative Award competition for its work on the Worry Eaters microsite, and received a Summit Creative Bronze for website redesign for its work for Kino West Media, a cinematic videography company in Palmer. In addition, that website redesign earned Wild Apple a Silver Creative Award.

Overall, the firm is known for its unusual creativity, and founder Amy Scott says that, although clients don’t expect it, there is always an element of “surprise and delight” in their finished product.

“Our major goal is to create a relationship with our clients that is transformational, rather than transactional,” said the director of project management and business development. “We want to listen to them, learn about their goals, then surprise and delight them by exceeding their expectations.”

This stems from work done by Rory Hurlburt, Scott’s brother and the company’s creative lead, art developer, and senior designer.

“Clients usually have no idea that we will do something fun,” Hurlburt said. “But we’re a modern marketing agency, and these things make someone want to watch a video or talk about what they have seen.”

However, the lure of an attractive site has to be backed by technical expertise, and that’s where Eric Belliveau enters the picture.

“There are many considerations and elements that go into a website and digital marketing; for example, it requires science, analytics, and technology to get someone to add something to an e-commerce shopping cart, then complete the sale,” said Wild Apple’s director of operations, technology, and Internet marketing, who explained that Worry Eaters are sold at a number of retailers, and creating the e-store was an important piece of the development process.

“It had to be responsive, which means it was built so the different characters could be viewed on smartphones,” he told BusinessWest. “But this all takes place behind the scenes, and the user is completely unaware that the intersection of more than one technology is required.” 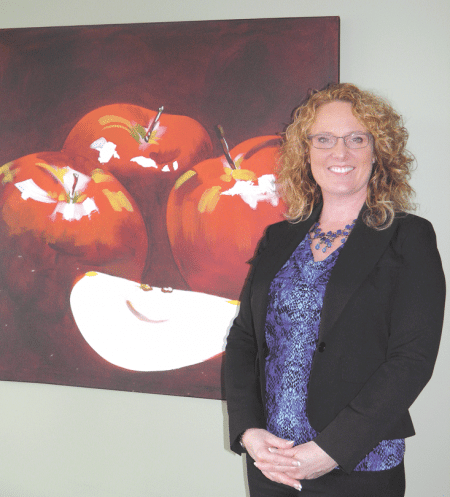 Amy Scott says her company was one of the first in the area to design responsive websites, which work on multiple platforms.

A new site for LEAP Bookkeeping in West Springfield and Greenfield was just launched, and although it contains all the pertinent and necessary information potential clients need to know, there are also unexpected — nee, delightful — surprises: Bakers showing off rising dough, a panting dog, two people raising their fists and giving each other a high five, and a woman wearing a cape with the LEAP logo on it, who is standing on the edge of a building that overlooks a city skyline, which seems to suggest she could easily leap into those buildings to help them solve their bookkeeping problems.

Hurlburt says creating such a finished product is neither quick nor easy, and it requires not only technical acumen, but a complete understanding of the clients and their needs.

“I live, eat, and breathe the project I’m working on at any moment in time,” he noted. “I want to understand as many facets of the business or organization as I can, and also seek to learn who the client is, and how that personality can shine through the company or organization.

“But technology is behind everything we do; we’re experts at leveraging it and provide outstanding designs with a ‘wow’ factor,” he went on, adding that data is brought together into a visual design that represents the brand they are working on.

Scott said that’s important. “Almost every company has a website. But they often have an unfulfilled dream to convey their business digitally in a way that draws more prospects and tells their story.”

Scott says she cut her teeth in marketing during a stint in the garment-manufacturing industry.

“I was the buyer, not the provider, but always felt there was so much room for improvement in leveraging the multitude of services required to drive successful marketing campaigns,” she said. “I was driven to create them.”

That drive compelled her to embark on a career change, and in time, her vision, energy, and success in graphic-design artistry inspired her to open Wild Apple Design in 2000, focusing on print marketing.

However, Scott occasionally collaborated with Belliveau. He began working in the field of web development in 2000, shortly after the dot-com crash, and eventually opened his own web-design and development company, which included consulting services.

Scott also called on her brother for help with a number of projects. Hurlburt was working as a freelancer and started his career with the idea of pursuing comic-book illustration, but soon found he enjoyed layout and design. “I spent 15 years designing for everything from web to print, which taught me that being well-equipped with information and strategy increases the value and viability of any well-designed art,” he said.

Although the trio had worked together on an occasional basis, their collaboration morphed into something much larger in 2009, after it became clear that the combination of their honed talents and expertise made them a unique team.

At the time, ABC decided to film an episode of the popular show Extreme Makeover: Home Edition in Suffield, Conn.  Scott was hired to do the publicity, and after being told she needed to create a website, she contacted Hurlburt. Coincidentally, Belliveau got in touch with her and asked her to create a logo, explaining that he had a few clients serving as vendors for Extreme Makeover.

The trio ended up working together for ABC, and after overcoming a multitude of challenges, they decided to do another project together. 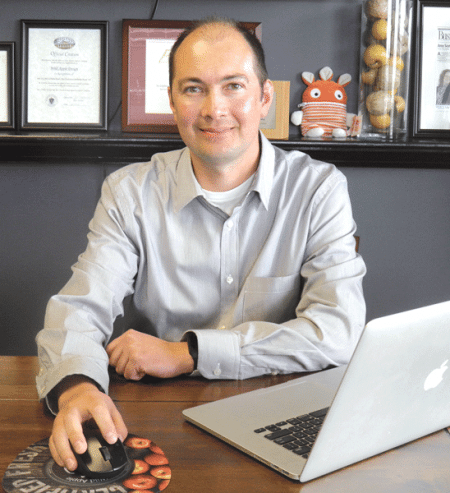 Eric Belliveau says it requires science, analytics, and technology to get someone to add something to an e-commerce shopping cart, then complete the sale.

That happened in 2011 after Scott was awarded a contract by Rockville Bank to build a website for the institution. Although the project turned out to be larger than they expected, their success resulted in a major decision to work together on a permanent basis under Scott’s umbrella.

She rented space in Post Office Park in Wilbraham and was joined by Hurlburt and Belliveau, who left his business, then religiously began evaluating every available technology.

Today, he focuses on digital marketing and the complex mechanics involved with setting up and maintaining websites. Meanwhile, Hurlburt is responsible for the creative-design work, and Scott focuses on marketing.

It’s all come together nicely, but when they first joined forces, their new, combined venture was a gamble.

“We felt we could do better and more business together, but it was an investment that involved blood, sweat, and tears; when we moved into this building, we were not sure if it would pay off,” Hurlburt said. “At the time, our goal was simply to survive.”

Fast-forward to 2015, and the company has not only survived, it is thriving. Rows of awards line the walls, and a year ago, Wild Apple created the tagline “Marketing Agency — Evolved,” which is indicative not only of its success and the wide range of services it offers, but the risks it has taken, which includes a foray into the world of responsive websites.

“We were one of the first to adopt the technology. When mobile traffic started to increase, it only involved an avenue or two and was an innovative area,” Belliveau recalled, explaining that, four years ago, sites were built either for desktops or mobile devices and typically didn’t function for both.

“But today, it’s becoming standard; all sites need to be responsive and function on tablets, smartphones, desktop computers, Kindles, and tablets,” he said, noting that the smartphone is usually the first point of contact.

“Roughly 40% of a website’s traffic will be on a mobile or handheld device; it’s also the place where most people access their e-mail,” Belliveau continued, adding that responsive websites need to be tactile, which means they can be manipulated by swiping or touching the screen, then clicking on an option.

The firm’s entry into this arena resulted in a world of experience, and today Wild Apple is able to deal with the entire ecosystem of marketing, which can include a responsive website; e-mail; social media; print, TV, and radio advertising; and a logo, branding, and identity design.

When the firm gets a new client, Scott conducts an in-depth interview to unearth its specific goals, needs, and vision for its products and services.

Once she has gathered all the information she needs, Hurlburt puts pencil to paper and begins sketching, and typically comes up with three or four ideas. 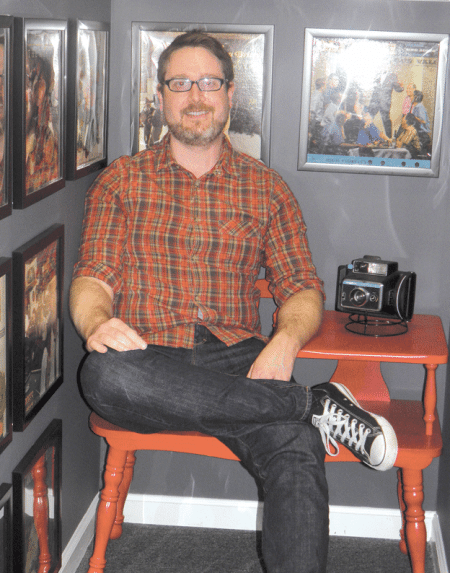 “What he creates has to align with the client’s goals, have a ‘cool’ factor, and yield results, which means grabbing someone’s attention,” Scott explained. “First impressions are important, as the general rule is that you have between eight and 10 seconds to get someone’s attention.”

Since about 35% of their clients are schools, creating surprise and delight can mean showcasing their colors, mascot, or “whatever their pride and joy is, in a unique way,” Scott continued.

For example, she discovered that the mascot for Cross Schools in South Carolina was a stingray, but they weren’t using an image of one. So Hurlburt took that information and created a happy little sea creature which has been imprinted on the students’ uniforms as well as the school’s signs, website, and marketing materials.

However, Belliveau’s expertise is also critical to the development process. “I’m in the forefront of emerging technologies such as responsive mobile website design and deploying the next generation in content-management systems,” he said. “I keep the team up to speed with the latest and greatest technologies so they can articulate what’s new or, in some cases, what’s changed in the ever-evolving landscape of web-based software.”

This work is ongoing for many clients as well as those who come to Wild Apple for an initial visit. “They want our critical eye on their brand. It’s about how it will hold up in a mobile environment, which involves more than aesthetics,” Hurlburt said. “And that’s what makes us different: we have design, marketing, and technology well in hand.”

Thanks to that winning combination, the company’s clients are unlikely to need to unzip the mouth of a Worry Eater and feed it to banish their marketing fears.