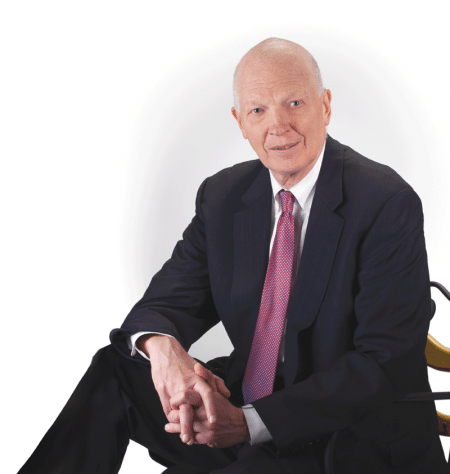 As he talked about Holyoke Community College, what has transpired since he arrived there in 2004, and what he envisions moving forward, Bill Messner dropped the name Ruben Sepulveda early and quite often.

And with good reason.

Sepulveda is now in what amounts to his junior year at Amherst College, studying Psychology. This is worlds — and even dreams — removed from the existence he knew after dropping out of high school in New York and spending considerable time homeless or living in the boiler room of the pool hall where he used to hustle to put a few dollars in his pocket.

His fortunes changed in a huge way not long after relocating to Holyoke and, more specifically, a chance encounter with HCC Adult Learning Center (ALC) Director Aliza Ansell in the gas station across the street from CareerPoint, where the ALC program was then housed. Fast-forwarding a little, Ansell convinced Sepulveda to take a college placement test. He scored well and eventually enrolled in HCC, majoring in Psychology. His bigger goal was to transfer to a four-year institution, and after a tutoring session with a student at Amherst College, he knew that’s where he wanted to land; he even carried a business card with the school’s name and logo on it in his wallet, looking at it often to inspire him.

“I realized I had to see the dream to make it a reality,” he told a writer for an HCC publication not long after becoming the first HCC student to transfer to Amherst in decades.

Sepulveda’s compelling journey goes a long way toward explaining why Messner, HCC’s third president, has been named a Difference Maker for 2012. It doesn’t tell the whole story, but it hits on the overriding theme of Messner’s tenure — creating opportunities, or what he calls “pathways.”

And that work started virtually the day he arrived on the Homestead Avenue campus. Actually, it goes back further, to one of his interviews for the job, when he asked, in essence, why did a community-college campus in a city that was 41% Latino have a mere 14% of its students from that demographic?

After taking over, he went about leading efforts to do something about those numbers. Indeed, Messner has made increasing enrollment and strengthening college relationships with the Latino community one of his top priorities. During his tenure, the number of Latino students has increased 67%, and they now make up 20% of the student body, a number that is continually rising.

Such improvement stemmed from a recognized need to change the direction the school had taken for what was then more than a half-century, he said, adding that general agreement on what needed to be done made it that much easier to move forward as a campus.

“The world had changed over the course of the 50 years of the school’s history, and I think many individuals agreed that the next step in the institution’s evolution was that we had to make it more accessible to the changing population of Western Mass.,” he explained. “We had to open the doors, get off campus, and become more involved in the community than we had heretofore.”

Achieving progress in this evolutionary process is one of many accomplishments Messner can cite since his arrival, and they all contribute to his designation as a Difference Maker. Others, which in some way contribute to the big picture, include:

• The opening of the Kittredge Center for Business & Workforce Development and the emergence of that facility as one of the region’s key resources for workforce training, professional development, and personal growth, through a number of innovative programs.

• Success in the long and challenging fight to create the Picknelly Adult & Family Education Center in the old downtown fire station in Holyoke. The PAFEC is a collaboration between HCC and its partners in the Juntos Collaborative, and it provides GED preparation and testing, adult basic education, workforce-development classes, English for speakers of other languages (ESOL), tutoring, mentoring, career counseling, and other services.

• Training and Workforce Options (TWO), a unique collaboration between HCC and Springfield Technical Community College established to support the workforce-training needs of the region’s businesses and nonprofits.

• Planned expansion of the campus through the pending acquisition of the former Grynn & Barrett photo studio and converting it into a health sciences building.

• Expansion of what are known as Holyoke Community College School District Partnerships. Over the past several years, HCC has significantly grown its partnerships with area school systems in ongoing efforts to meet community needs and make the college more accessible. In particular, the college has worked closely with both Holyoke and Springfield to help them deal with the challenges of enhancing student success. Overall, HCC has two dozen public-school outreach initiatives throughout the Pioneer Valley, such as the Gateway to College program, which brings at-risk high-school students to the campus from Agawam, Holyoke, Longmeadow, Ludlow, Palmer, and Springfield.

Through these efforts and others, Messner has advanced his primary mission of creating those pathways he described, while also putting greater emphasis on the middle word in the college’s name — ‘community’ — through programs, policies, and, in Messner’s own case, leading by doing.

Indeed, he has become involved with a number of organizations and initiatives, including Wistariahurst, the United Way of Pioneer Valley, the Economic Development Council of Western Mass., the Pioneer Valley Planning Commission, the Holyoke Chamber of Commerce, Holyoke Medical Center, the Holyoke Innovation District Task Force, and others.

“I’ve spent a good deal of my time off campus involved in a variety of community endeavors, as one way of demonstrating what this institution should be all about,” he said. “Another way of doing that, beyond the president getting off campus, is the institution getting off campus. The transportation center is perhaps the most visible example of that, but so is the Ludlow Adult Learning Center, which serves a large immigrant population there. And the Kittredge Center, even though it’s on campus, is another example.

“It’s another visible manifestation of the fact that we’re here to serve the community, not just in the traditional sense that we have for 50-some-odd years,” he continued, “but in an array of ways, such as seminars, workshops, meetings, and more.”

Looking back on these efforts — and ahead to what must come next — Messner came back to those two words access and pathways, and again summoned the name Ruben Sepulveda. He’s only one of many who have been impacted by the school’s heightened focus on access and community, but he exemplifies many campus-wide strategic initiatives.

These include everything from strengthening ties to the Five Colleges, including Amherst — Messner went so far as to say that one of his unofficial goals is to change that phrase to ‘Six Colleges,’ with HCC joining the club — to bringing the demographic mix of the college more in line with the communities it serves.

And as he goes about that work, he can find some affirmation in some words Sepulveda penned in an essay at HCC years ago:

“Contrary to what most people think about underprivileged people — those with substandard education, those who are part of the cycle of mediocrity, those people we see on the bus, or dragging baby carriages with babies in tow, or just released from prison — they are not empty inside,” he wrote. “They are not content with the lives they have. They want more; they dream of more.”

For helping to carve the pathways to more, Bill Messner is truly a Difference Maker.