Officers, the Springfield Corps of the Salvation Army 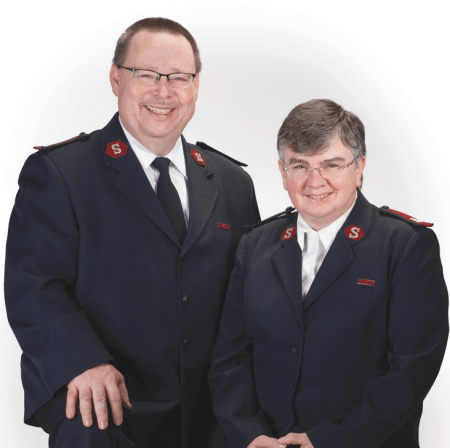 Tom and Linda-Jo Perks were hardly novices when it came to disaster response last June 1, when tornadoes plowed through several communities in Western Mass.

Indeed, Tom, commanding officer of the Salvation Army’s Springfield Corps, was in Lower Manhattan only a few days after 9/11, working to provide relief to the survivors of the terrorist attacks. And his wife, Linda-Jo Perks, co-commanding officer, was in Biloxi, Miss. just after Hurricane Katrina barreled through in 2005, doing similar work.

But both told BusinessWest that there was a dissimilar feel to the relief efforts in Springfield after the twister changed thousands of lives in a matter of seconds that fateful Wednesday afternoon, a phenomenon Linda-Jo summed up quickly and effectively when she said, “it’s different when it’s your disaster.

“We were used to people telling us what to do, and we’d respond,” she continued. “But when it’s your disaster, you’re in charge, and the next morning, we just knew that the people who were isolated needed food and care — and we moved.”

Elaborating, Tom said there was a far-greater personal connection to the human side of the devastation, because responders knew some of the people who were impacted, as well as that much greater sense of ownership of the relief efforts. This sensation would, unfortunately, be repeated a few months later when a hurricane swept across Western Mass., and again in October, when a freak snowstorm cut off power to hundreds of thousands of people.

Effective disaster response in a tumultuous 2011 is only one of many reasons why the Perkses, or “the majors,” as some call them, have become part of the latest class of Difference Makers. Most all others involve issues and problems that are with the region on a constant basis — and for which the Perkses and the team they direct have crafted results-driven responses that have stood the test of time.

There are seasonal programs such as Coats for Kids, Toys for Joy, and a summer literacy program, as well as ongoing initiatives including a family reading program, tutoring services involving students from Springfield College and area high schools, teen violence and gang-prevention efforts, food pantries, and clothing assistance.

And then, there’s a groundbreaking endeavor called Bridging the Gap.

Now 15 years old, BTG, as it’s called, was created to help teenage first-time offenders become one-time offenders and get their lives back on the right path.

It does so through a 12-week program (classes are conducted three days a week for three hours a day) focusing on life skills ranging from communication to money management; from building self-esteem to goal setting.

Those who successfully complete the program and do not commit another crime within a year of that accomplishment have their criminal records expunged, “which can have a serious impact if you’re talking about college or getting a job when you’re 15,” said Tom, noting that BTG has enjoyed an 89% success rate. It has won a prestigious honor — the National Justice Department Outstanding Youth Program of the Year Award — and is now a model for many other organizations serving young people, with an average of eight to 10 groups coming to Springfield each year to see how it works.

BTG is an example, said Tom, of how the Salvation Army earns attention and headlines for its response to tornadoes and hurricanes, but the bulk of its work is “with people who come through the door each day with their own disaster.”

Reflecting on their quarter-century of service to the Salvation Army, the Perkses noted that they took different paths to the organization. Linda-Jo said her parents were Salvation Army officers, and she essentially grew up with the institution knowing she would one day be a part of it.

Tom, meanwhile, said his route to the Springfield Corps’ Pearl Street facility was more a matter of circumstance than destiny. He was 4 years old when, to try to get along with a gang of boys in his Warren, Ohio neighborhood, he let the air out of the tires of dozens of cars before he was eventually caught in the act. He remembers the police officer who escorted him home telling his mother, “you better do something with him, or he’s going to be mine.”

“She heard that the Salvation Army was a church and that it had a boys program, and we started attending, so I grew up in the Salvation Army,” said Perks, adding that, despite this, he still wandered down the wrong path. He had become involved in drugs and alcohol and was a young man without much direction or purpose in his life when another incident provided him with both. Not long after graduating from high school, he and a good friend were in a serious automobile accident. Perks was left with a fat lip, while his friend, the driver (and the straightest-laced guy in the world), was left in a coma.

“I said, ‘this is not fair; I should be the one who’s hurt really bad, not him,’” Perks recalled. “God said it wasn’t the first time it was someone else when it should have been me, and that I needed to decide what to do with the rest of my life. I considered the Salvation Army, and when other doors closed and that one opened, I walked through it.”

The Perkses met on the first day they were in seminary, and have been together virtually every day since that moment. Their pending 25th wedding anniversary and 25th anniversary of graduating from the seminary were only a few days apart.

They started their careers with the Salvation Army in the Worcester corps, and made subsequent stops in Greenfield and Pittsfield before coming to Springfield, the third-largest corps in the state.

When asked what constitutes a typical day for them, they said there is no such thing, which is what they like most about their work.

“There’s never what I would call a normal day,” said Linda-Jo. “Each day is different; you could be counseling a runaway, giving a bus ticket to a transient, helping someone whose loved one has died and needs to get to the funeral, performing a marriage, helping a child to read … you never know what you’re going to see when you come in the door.”

This was especially true in 2011, when one weather-related disaster followed another, with many families impacted by two or even three of them.

The Perkses were at their home in Agawam when the tornado carved its path through Western Mass. It missed them, but they knew from watching on television that it didn’t miss many sections of Springfield. They couldn’t get into Springfield right away, but immediately started mobilizing the organization’s resources, staff, and volunteers for a multifaceted response.

It involved everything from bringing food directly to families in the impacted areas to getting necessities to families displaced by the disaster and living temporarily in the MassMutual Center, to coordinating collections of items ranging from bottled water to diapers.

But beyond supplies, staff and volunteers from the Salvation Army also delivered counseling, support, and, quite often, a literal shoulder to cry on.

“People were trying to clean up, and they were crying,” said Linda-Jo. “It was sad, it was hard, it was moving. People just appreciated the fact that we thought about them, and it was really neighbor helping neighbor; it was people from Cape Cod sending tractor-trailer loads of supplies to the area and a Christian school taking a trip here and saying, ‘can we help you?’”

Tom has similar memories, and summed them up by saying that perhaps the most precious commodity the Salvation Army brought to victims was hope, and that’s something that’s supplied to all those who come through the door — literally or figuratively — with their own disaster.

For providing that hope, in whatever form it takes, the majors, and all those who work with them, are certainly Difference Makers.