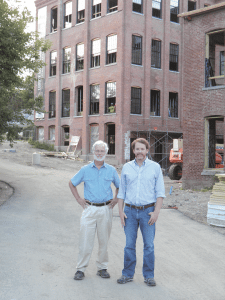 Andy Hogeland (left) and Hugh Daley say the conversion of the former Cable Mills into new apartments is an example of a public/private partnership that will add vitality to the town.

Williamstown is in the process of creating its first economic-development plan, and the Board of Selectmen, as well as key figures from major town institutions, are excited about its potential.

The Economic Development Committee, or EDC, was established in January, and members include Andy Hogeland and Hugh Daley from the select board, business owners, educators, and officials from Williams College and the Clark Art Institute, major employers in town.

“It’s a significant team effort, and I am delighted with the composition and dedication of our committee, as well as the fact that hundreds of people have shown up at public hearings to give us ideas,” Hogeland said.

Fred Puddester agrees. “It’s an important effort; we have a really good working group, and I know we will end up with a great product,” said the EDC member and vice president for Finance and Administration at Williams College.

The initiative came to life late last year after the selectmen identified priorities they wanted the committee to focus on. The most important is stimulating economic growth by attracting new businesses and residents, but it is tempered by an equally strong resolution to protect existing businesses and institutions as well as the town’s educational system, quality of life, and bucolic environment.

“The town is open to doing whatever we can to improve our vitality without losing our character; it’s something we’re all protective of,” Daley said. “But if the Clark is getting 150,000 visitors a year, the question is, how can we can get them to come to Spring Street to frequent our restaurants and businesses?”

In order to answer this and develop a comprehensive plan, the committee has been divided into three subdivisions with different functions:

• The best-practices group, which measures and evaluates findings about the town’s economic health and strategies for growth compared to congruent communities;
• The town-outreach group, which is focused on implementing communication between the team and residents, businesses, enterprises, and town officials; and
• The reporting group, which has developed an interim report and will create a draft and a final report to be presented to the selectmen in December.

Hogeland and Daley told BusinessWest that data compiled by the outreach subcommittee will weigh heavily in the final report. “We want to make sure we understand and incorporate what residents are looking for,” Daley said.

To that end, the committee has hosted two public forums, which included question-and-answer periods. “They were well-attended and turned into discussions about what kind of town people want this to be; values centered around culture, education, the quality of life we have, and our natural beauty,” Hogeland explained. “People said they like the town the way it is, but would enjoy it if it was a little more economically vibrant.”

The feedback was posted on the town’s website, and a survey with eight questions was included with every tax bill, which could be filled out online or on the questionnaire.

“We received 500 responses, which proved that people are actually interested in what we’re doing,” Daley said. “They included a wide range of suggestions, which points to excitement about our plan.”

Hogeland concurred. “Hundreds of ideas were submitted, and the concerns and ideas people expressed were not just about money and jobs, but about the quality of life and what it’s like to live here,” he said. “Some things were as simple as improving the town website, which we are in the process of doing. But it’s our job to distill all of the ideas and come up with a feasible, actionable focus.”

The outreach group also conducted a forum for the business community, and impediments to growth were identified and ideas were generated to help create a more robust economy.

Meetings of the entire committee are held twice a month, and key individuals present profiles of their work, along with updates on institutional and professional efforts relevant to economic development within the community.

Williams College, which has close ties to the town, recently kicked off a huge capital program, which benefits local businesses and tradespeople.

“We have a number of interesting projects underway, but the largest is the construction of our new science facilities,” Puddester said, noting that an addition will be put on an existing building and an old building will be torn down and replaced with a state-of-the-art science center. The cost estimate for the projects is $200 million.

The space for the addition contains two houses, and one that is in good condition will be relocated to a vacant lot this fall. “It’s a similar situation that occurred last year when we built a new dorm,” Puddester said, explaining that a house on the site was purchased by the owner of Guntlow Engineering, who moved it and is using the first floor for business and the second floor as apartments.

The college is also building a $15.5 million, 60-bed dormitory that will be used as swing space when renovations are needed on older dorms, and undertaking a $12.5 million renovation of an old fraternity house on Route 2.

“It’s a restoration of a fabulous building that will be used to house our admissions and financial-aid offices,” Puddester continued. “We’re also renovating the performance space in Chapin Hall, a $5.5 million project.”

In addition, an architect has been hired to design a new, two-story building downtown on Spring Street. The first floor will become a college bookstore with a children’s section, coffee bar, and space for poetry readings, book signings, and other events, while the second floor will contain office space.

The Log, located across the street, is also being restored with $4.5 million from alumni who cherish memories of the place that constituted a primary meeting ground for them before the new Student Center was built.

“It will become a fabulous gathering space for people in the community and will contain a restaurant and area for students to practice poetry readings or standup comedy,” Puddester said.

He added that the college has a terrific working relationship with the town and is doing all it can to help the EDC. The college supported the best-practices subcommittee by supplying it with two interns to collect and analyze data from 12 communities in New England, New York, and Ohio that were chosen for comparison and inspiration.

Economics Professor Stephen Sheppard, also a member of the EDC, is supervising the interns, and Daley said the data they collect will allow the committee to identify key characteristics of successful towns.

“We can bounce it against ideas we have generated and learn what works, then use those programs,” he noted. “We don’t have to reinvent the wheel.”

The town is already on the path to enhanced vitality, however, and construction is taking place in a number of arenas, including the Cable Mills buildings downtown, where Phase I of converting them into apartments is well underway.

A total of 61 units will be constructed during the first phase, and 13 will be dedicated to affordable housing, Hogeland said, adding that the $26 million project is a good example of how the town works with developers via public/private partnerships.

Daley concurred. “We used $1.525 million of Community Preservation Act funds for this because it supports affordable housing, historic preservation, and open space.

“The buildings were empty for over a decade and had started to deteriorate, but the new units will be extremely nice,” he continued. “They will have one to three bedrooms, and the adaptive reuse of the existing infrastructure will increase the economic vitality of Williamstown. When the buildings are filled with people again, it will change the surrounding area.”

“It contained about 300 residents, many of whom were elderly, and we have done everything possible to make sure they have an opportunity to live here,” Daley said, adding that the town contributed $100,000 in Community Preservation Act funds, boosted by $2.6 million from a FEMA grant, to make the project possible.

“It’s an example of how we work to protect our citizens and shows the character of our town, which is one of the things residents want to preserve; everyone knew someone who lived in the Spruces,” he continued, noting that the project came about as a result of a partnership between the town and three nonprofit organizations.

Officials on the EDC committee are dedicated to the project, and a draft of strategic priorities will be finalized in October.

“At that point, it will go out for public comment — there will be a lot of publicity, and we will host meetings so people can give us feedback,” Hogeland said, adding that modifications will be made after input is received.

The selectmen will receive the final document in December, which will include strategized priorities, an assessment of feasibility, and the projected impact of change, as well as recommendations about implementation.

“Williamstown has great things coming over the next few years; Williams College has kicked off a huge $278 million capital building plan, and the town has taken steps to deal with housing affordability for families and seniors,” Daley said. “And with the creation of an economic-development plan that focuses on increasing the vitality of our local economy without sacrificing the character of our town, Williamstown will continue to be a great place to live and invest.”

Williamstown at a glance 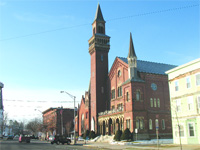