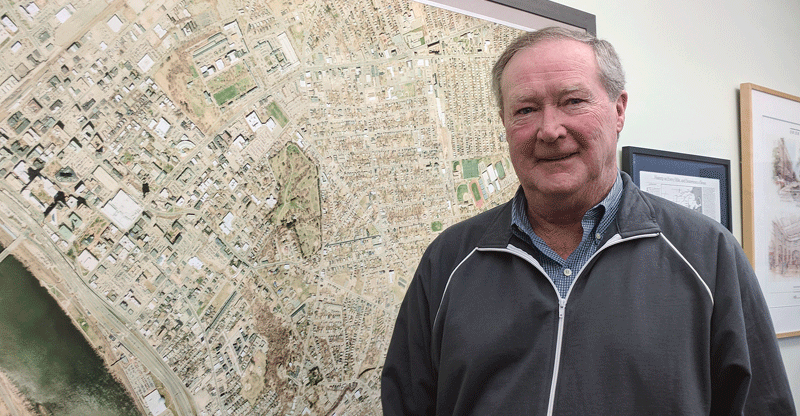 The aerial map of Springfield behind Kevin Kennedy, taken just a few years ago, would look very different today, and that’s a good thing, he says.

To say projects are coming to fruition in Springfield is a bit of an understatement these days, with a $950 million casino opening downtown in September, following right on the heels of the $90 million Union Station renovation and the $95 million CRRC MA plant on the former Westinghouse site, which is expected to begin producing rail cars for the MBTA this year.

Kevin Kennedy, the city’s chief Development officer, cited those projects at the start of a recent conversation with BusinessWest because they have been, in many ways, the most prominent signs of economic momentum in Springfield. But they’re only three among dozens of moving pieces coming together to generate real excitement in the City of Homes.

“We’re calling it ‘the year of the new Springfield,’” he said.

And it needs to be, considering that the casino, if projections are correct, will draw 12,000 to 15,000 visitors per day, perhaps more at the start. Meanwhile, the Hartford rail line into Union Station may bring up to 2,000 people a day, in addition to the usual PVTA and Peter Pan bus traffic.

“A lot of people will be coming through Springfield; it will be a completely different area in terms of foot traffic,” Kennedy said, noting that restaurants, retail, and entertainment options in the area will get a boost — possibly a big one.

“Bruno Mars, who just cleaned up in the Grammys, plays MGM in Las Vegas. Lady Gaga performs at MGM facilities. There’s Cirque de Soleil … these are things that, from an entertainment point of view, Springfield could only wish for,” he said, adding that the sheer possibilities have people excited.

But it’s important, he said, not to simply let the wave of MGM visitors happen, but to pair the casino’s opening with an image campaign to let people know what else Springfield and the surrounding region have to offer. After all, it’s not every day that a business opens with the potential of bringing thousands of people into the city every day who would otherwise not be there.

And, indeed, there’s much more than nightlife afoot downtown; for example, the innovation economy that has taken root with entities like Tech Foundry, TechSpring, and Valley Venture Mentors has created a fertile environment for ideas to turn into cutting-edge companies.

Meanwhile, “I never thought we’d see the day that we were creating market-rate housing in our downtown,” Kennedy said, citing the 265 units in the SilverBrick Lofts and a planned transformation of the old YMCA on Chestnut Street into 114 market-rate units, not to mention the rehabilitation of the Willys-Overland building into 60 market-rate units.

“Developers are telling me there’s room for 300 more units in terms of demand,” he added, noting that such downtown housing tends to attract the younger demographic a city needs to remain vital — and the arrival of MGM Springfield ties into that as well. “Millennials love first-class entertainment. The pieces all fit.”

Those pieces include persuading people who visit Springfield, some for the first time, to explore what else the city has to offer.

For instance, “we have two things nobody else has — the Dr. Seuss museum and the Basketball Hall of Fame,” Kennedy noted. The latter is embarking on a major, $25 million renovation, while the former continues to smash attendance records at the Springfield Museums, drawing visitors from all 50 states and around the world (see story on page 39).

Kennedy drew on an apt analogy for the Hall of Fame when talking about the way Springfield is currently promoting itself. “We do some coaching and try to keep the team together, but the most important part is getting the players to play,” he said. “All the citizens and businesses, they’re the real stars of the show right now. Everyone wants to something — the chamber, the cultural council, the EDC, all these are partnerships, and they’ve taken the ball and run with it. Every major organization has stepped forward.”

One of those downtown partners, the Springfield Central Cultural District (SCCD), recently signed onto the first cultural compact in the state, an agreement among the city, the district, the Massachusetts Cultural Council, and state leaders that solidifies the city’s recognition of the arts as an economic-development activity.

But the SCCD has long been promoting and installing public art as a means of ramping up creative placemaking to boost the walkability and attractiveness of the downtown.

“I think that’s something we’ve focused on since the beginning of the cultural district — increasing walkability, not just to drive visitors to a destination, but for add-ons,” said SCCD Executive Director Morgan Drewniany, before explaining what that means. “Say someone is here for MGM, and they’re walking between the bowling alley there and a restaurant. If the streetscape between those places is attractive and funky and cool, you might take that extra step and keep walking, instead of stopping at the place that’s easiest.”

That’s the goal of turning the streetscape — through public art, bustling storefronts, and increased safety measures — into an attraction in itself, so if someone arrives in the city to visit MGM and maybe the Seuss museum, they might be compelled to stick around and check out more destinations.

SEE: Springfield at a glance

The city, meanwhile, has embarked on revitalization projects at Stearns Square, Pynchon Place, and Riverfront Park, and is looking into restaurants installing ‘bumpouts’ onto the sidewalk for outdoor seating. Meanwhile, a pedestrian wayfinding system downtown and a coming bike-share program will further create a sense of vitality for residents and visitors alike, Kennedy said.

Perhaps most important is a city-wide reduction in crime that officials attribute to a number of factors, from an increase in police officers to leadership classes in the department to a computer program on laptops in cruisers that pinpoint where recent crimes have occurred and allows police officers to read reports about them.

One of the most notable changes has been the expansion of C3 (community) policing in vulnerable neighborhoods where high levels of poverty, truancy, and healthcare problems exist. Special police units have been created and put in place in four areas: Mason Square, the South End, the North End, and lower Forest Park.

Downtown, that public-safety momentum will take the form of a new substation and three police kiosks, Kennedy said, adding that Police Commissioner John Barberi understands the connection between safe streets and economic development.

“The things he’s done have been nothing but supportive. The concept of police kiosks and substations will not only make the downtown safer, but will free up police in other neighborhoods when they’re not answering calls downtown. All the neighborhoods benefit.”

The police force, in fact, was one of the earliest adopters of Drewniany’s arts-is-safety philosophy and her belief that more public art can increase foot traffic, which in turn raises the perception of safety, which then actually increases safety. “Criminals aren’t hanging out doing whatever they want to do in a place that’s active with pedestrians,” she said. “It follows the same idea as the police kiosks. If people feel like it’s a safe place, it will actually be a safe place.”

Meanwhile, MGM made a commitment to spend $1.5 million annually for 15 years to create and maintain a public-safety district downtown due to the traffic it will bring to the city. The district runs from the south end of Mill Street to Union Station, and from Riverfront Park up to the Quadrangle.

All the Right Moves

As for the casino, Kennedy said the way the city handled the process of securing MGM made sense.

“We were fortunate to take the right tack in how to approach the gaming question, to not marry any individual suitor. We courted multiple suitors, created competition, and created leverage,” he said. “I don’t think anyone would deny we ended up with a top-flight company in MGM that created a perception outside of Springfield that we were ready to do business in the right way.”

He credited former Gov. Deval Patrick for sowing many of the seeds for some of the city’s recent flagship developments, including a $350,000 planning grant in 2008 to get Union Station renovated. “He was the one who said to those that wanted to provide rail cars for the MBTA, ‘look west.’ And I think we picked the right mix of things, and have been fortunate with major investments like MGM but also making a transition to the innovation economy downtown. All kinds of pieces of the plan worked.”

And it’s not just new entities creating excitement, he added.

“What MassMutual did recently, by bringing 1,500 people into their home office, really solidifies its future here in Springfield,” he noted. “They’re also bringing anywhere from 500 to 1,000 employees into Boston, which is also really good for Springfield because it gives us a footprint in the state capital.”

That, along with Big Y’s just-announced expansion of its distribution center, are two examples of how large, legacy companies remain a vital force, even with all the buzz generated by the startup economy. “Not only are we bringing in outside companies, but our existing companies are expanding. It’s all great news for Springfield.”

Kennedy also credited Mayor Domenic Sarno and other officials for not thinking parochially and understanding the value of regional connections, which include the development of more rail platforms along the north-south line that connects Connecticut and Vermont. “We can’t discount the importance of Union Station for the simple reason that rail transportation is going to become more and more important.”

As for that ‘new Springfield,’ Kennedy traces the recent resurgence in the city, and especially its downtown, to the construction of the federal courthouse on State Street in 2008. In many ways, that project launched a decade of impressive development, culminating in a 2018 that many people probably couldn’t have envisioned back then, when none of these major projects were on the horizon and the national economy was tanking.

“That gave you the confidence that you could really do something,” he told BusinessWest. “And what we’re seeing now isn’t smoke and mirrors; they’re not just feel-good things. These things are real.” 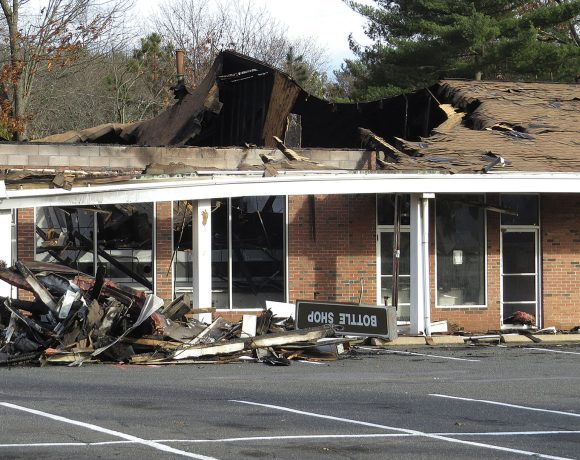 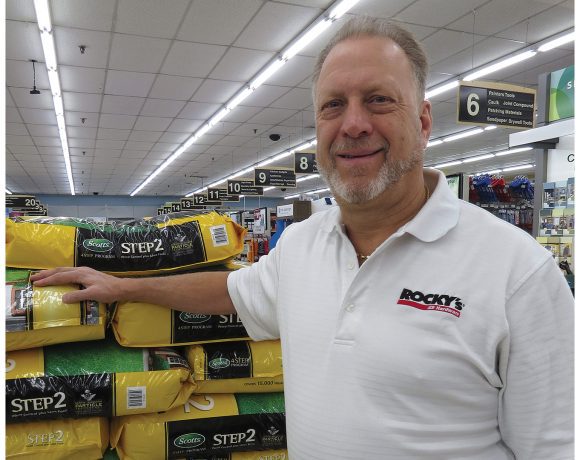 Rocky’s Ace Hardware Approaches a Century of Innovation and Change