Country Bank Expands Its Presence in More Ways Than One 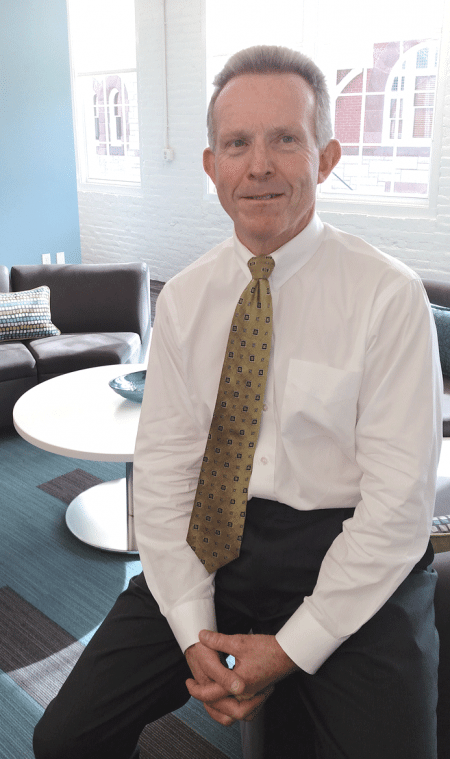 Country Bank’s sheer scope in Eastern and Central Mass. — it now boasts 15 branches, almost $1.4 billion in assets, and a loan portfolio approaching $1 billion — positions it among the larger banks in its footprint. But even during a time of financial growth, President Paul Scully is equally committed to growing the bank’s community ties, through an ever-evolving series of initiatives that engage employees, customers, and area residents alike. After all, a bank’s success, he believes, shouldn’t be reflected simply on the bottom line.

Paul Scully is gratified that Country Bank is wrapping up a particularly strong year for both commercial loans and retail business. But the bottom line isn’t all the bank is building.

For instance, employees at the bank’s newest branch, in Worcester, recently teamed with Habitat for Humanity to build a playhouse for children of veterans. “Staff members spent the day building the playhouse in the parking lot,” said Scully, the bank’s president. “They loved it.”

More significantly, Scully recently returned from Haiti, where a team of 14 built two houses over five days before being chased out by the quick-moving Hurricane Matthew. Last year, he accompanied a team of management-level employees on a similar home-building mission in the beleaguered Caribbean nation, and this year, he opened it up to all staff members.

“Thirty-three people said they’d like to go, so we had a lottery,” he explained. “It’s a tremendous feeling giving back in the most impoverished country in the western hemisphere. They realized, if they didn’t before, how amazingly fortunate everyone here is.”

The home-building project was also an exercise in team building, he added. “We got to know people for who they are — not just the role they play Monday through Friday.”

That sense of community — both within the Country Bank family and in service to the cities and towns where its 15 branches operate — has increasingly become a hallmark of the Ware-based institution’s identity, Scully said. 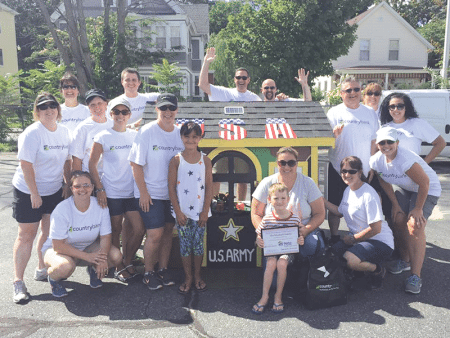 Country Bank employees in Worcester celebrate the construction of a playhouse for children of veterans, a project conducted alongside Habitat for Humanity.

“When it comes to giving and community involvement, we believe that’s the role of a community bank, and most community banks feel similarly,” he told BusinessWest, noting that the bank’s support of area food banks, senior centers, and Baystate Mary Lane Hospital, among other entities — in all, totaling some $600,000 annually.

“Donations are geared toward all aspects of the community to improve quality of life for residents,” he said. “We’re a staunch supporter of our local hospital because we believe healthy communities must have access to good healthcare, and people want to stay and live and perhaps move into our communities to access quality healthcare.”

To further focus its community involvement, in 2015, the bank launched its Country Bank Cares community volunteer program, offering volunteer opportunities at various events throughout the year to Country Bank staff. Each volunteer hour is logged, and at the end of the year, staff members who volunteered 10 hours or more are awarded a grant to a charity of their choice for $100; 25 hours earns $250.

Thirty-three people said they’d like to go, so we had a lottery. It’s a tremendous feeling giving back in the most impoverished country in the western hemisphere. They realized, if they didn’t before, how amazingly fortunate everyone here is.”

“They have a stake in where the money goes,” said Shelly Regin, the bank’s marketing director, noting that employees donate about 700 hours of service per year. “They’re really engaged in it and honored to take part in it.”

The spirit of giving even incorporates a dress-down day on Fridays, when employees pay to wear jeans, and the bank matches all donations. At the end of each month, a committee of staff members decides which local nonprofits get the money — to the tune of about $2,500 a month. “That’s a lot of jeans,” Scully said. Meanwhile, a recent event called Be Bald, Be Bold had employees donning bald caps to draw attention to cancer research and raise money for the Baystate Mary Lane Walk of Champions.

“This is something that existed here long before Shelly or me,” he went on, explaining the motivation behind Country Bank Cares and other initiatives. “It’s the idea that Country Bank is engaged in the community and people’s quality of life, and we want our 220 staff members to experience another dimension of giving back.”

With assets of $1.39 billion at the end of 2015 and a loan portfolio of more than $978 million, Country Bank is, of course, deeply ingrained in its communities in the traditional banking sense as well. And 2016 has seen further financial growth.

“We’ve had a very robust year in commercial loan originations, really centered in our existing footprint but also throughout New England,” Scully said. “We’ve had a tremendous year in both loan growth and deposit growth. I think that’s attributable, in part, to improvements we’re seeing in the economy and more robust product offerings.”

He noted that the evolution of e-banking solutions increasingly allows banks to develop relationships with customers outside their branch footprint. “That’s opening up the market dramatically. Folks can open up accounts with us online, can do anything they want online.”

Still, physical branches remain important, and the move to Worcester last year made sense on multiple levels, he explained.

Go HERE for a list of Banks in Western Mass.

“We’ve been lending in Worcester for more than 50 years,” he noted, adding that the city boasts a larger population and more diverse demographic than most Country branches, both of which equate into more business opportunity. And without a branch, it was difficult to move commercial customers into other products, such as retail accounts.

“From a cultural perspective, we have not changed the culture to adapt to the city — we’ve just brought the same level of service and quality to Worcester as our other marketplaces.” 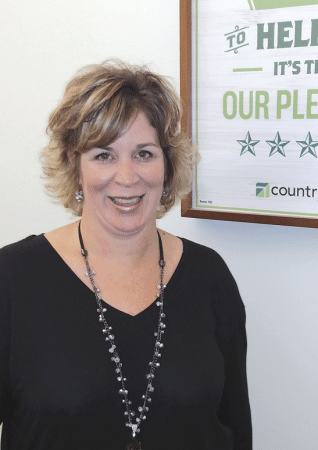 Shelly Regin says employees are gratified to have opportunities for volunteerism and a say in where the bank’s charitable dollars go.

However, Country remains focused on growing its e-banking platforms as well, reaching a generation that prefers the convenience of doing business on their devices rather than visit a branch. But the community-bank world has long moved past the days of thinking branches will eventually be obsolete.

“They said years ago that ATMs are going to replace branches,” Scully said. “What happens is, every time there’s an advancement, people believe it’s going to replace something, but it doesn’t replace it — it just complements it. In this case, it allows customers to enjoy many different ways to do their banking. Has the foot traffic slowed down? Yes, a little bit, but people still want to know it’s there if they need it for any reason.”

Mortgage applications are one area where the change in customer behavior has been stark. When Country launched an online application option 10 years ago, customers were slow to embrace it, preferring to meet with a loan officer in person. Online applications were filed mostly by customers with poor credit who were targeting multiple banks at once, hoping someone would accept them. Today, 80% of the bank’s mortgage applications originate online, simply because borrowers realize it’s easier.

Brick-and-mortar branches are important for branding as well, but marketing campaigns — through both traditional and social media — remain critical, Regin said, noting that the challenge is to effectively tell a story that’s reflective of the institution and sets it apart.

To that end, with the help of its marketing agency, the bank conducted scores of interviews, not only with customers and employees, but people with no connection at all to Country Bank, asking why they choose to bank or work there, or why they don’t. The overwhelming takeaway, Regin said, is that relationships, and how the bank treats people, are its most important investment. So its current campaign incorporates slogans driving home the importance of priorities like service and even good manners. (One slogan reads, “we think politeness is a higher form of intelligence.”)

“That’s just who we are,” she said, before Scully added that the bank has always conducted business that way, but the campaign simply crystallizes it. Equally important is providing the kind of customer or borrower experience that leads to referrals. “Someone says, ‘I had a great experience with them.’ Another says, ‘OK, maybe I’ll give them a try too.’”

The Country Bank name is only 35 years old, but the institution has been around since 1850, when it was known as Ware Savings Bank. It took on its current name after a 1981 merger with Palmer Savings Bank; another merger with Leicester Savings Bank 17 years ago further increased the bank’s holdings.

With that long history behind it, the bank understands the importance of helping future generations establish their own financial health, which is why Country conducts financial-literacy programs in 29 elementary schools, conducts a Credit for Life program in area high schools — teaching seniors the importance of prioritizing spending — and expanding that program with seniors at Worcester Polytechnic Institute.

“That next step is really geared toward those graduating from college,” Scully said. “They’re the ones who will be experiencing the real workforce soon, so the engagement is greater.”

Also thinking generationally — this time focusing on Millennials — Country has been overhauling its corporate headquarters to reflect modern workforce trends, such as low walls, collaborative spaces, enhanced technology, and even a café.

“We want to be an employer of choice for Millennials and folks who say, ‘this would be a cool place to work,’” he explained. “There’s great stuff happening; we’re creating a different vibe in this building. I say we’re giving it a Google vibe. We want to have the building become a place where people not only want to work, but feel really engaged.”

It’s just one more way Country Bank continues to identify needs and meet them — just as it has for the past 166 years.

The Challenge and Reward of Transparency Culture 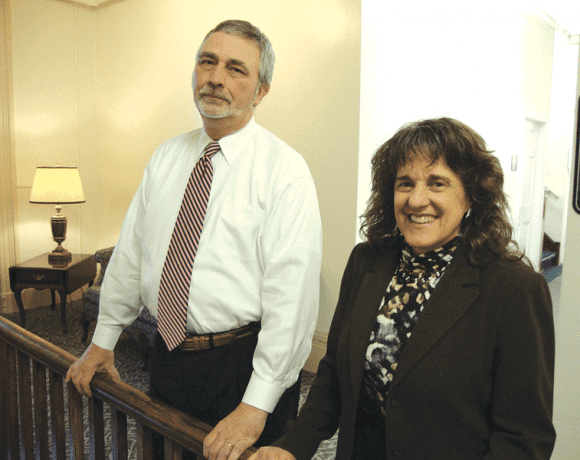