In Palmer, Life Goes On After Failed Casino Bid 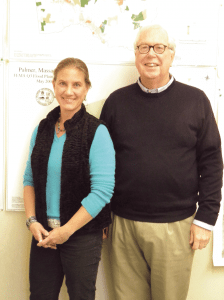 Charles Blanchard says many residents and people who drive through Palmer think, because the majority of its mills have closed, that industrial jobs no longer exist in town.

“We hear it all the time,” the town manager said, adding that this is an erroneous conclusion, and a new video, titled Industry Alive in Palmer: An Inside Look at Local Businesses, has been created to dispel that notion.

It was shown for the first time on Oct. 14 during a Town Council meeting and showcases eight of the town’s successful manufacturing companies. They range in size from large to very small, but many have been operating for generations inside former mills and locations such as the Maple Tree Industrial Center, a 48-acre site on Route 20 with access to rail that abuts the Massachusetts Turnpike.

“There are people doing things behind walls here better than anywhere else in the world; it’s just interesting that it’s happening in Palmer,” said Mark Borsari, president of Sanderson MacLeod Inc., a company featured in the video that makes twisted wire brushes.

Darcy Fortune agrees. “I’m a fifth-generation Palmer resident, and before I did the interviews for this video, I did not realize how many factories, foundries, commercial distribution facilities, and industrial parks we have here in town,” said the co-creator of the production. “Although Palmer is known as the Town of Seven Railroads, it should actually be called the Hub for Industrial Activity.

“People work hard here every day behind the scenes to produce products that are distributed all over the world,” she went on. “These establishments are participating in the American dream, and they deserve recognition, along with the smaller mom-and-pop businesses that prosper here. Palmer is an ideal place to live, work, and operate a business.”

Getting that message across was the unofficial motivation behind the video, which shows that there is definitely life in this community after a high-stakes attempt to bring a casino to a site off Turnpike exit 8 — an endeavor that went on for several years — came to an abrupt end 13 months ago when town voters voted against the plan.

And while the casino dominated talk in the town, officials there didn’t wait for the matter to be decided before moving forward with a number of economic-development-related initiatives. These include everything from a tax-increment-financing (TIF) zone to establishment of so-called priority-development sites, a status that requires officials to issue permits for new businesses in those sites within 180 days, to the creation of the new position of economic development director. Linda Leduc, who had been serving as the town’s planner, now has that new title as well, and she’s moving ahead with a number of strategic initiatives ro raise Palmer’s profile and bring more businesses to the community.

“We have a variety of strategies and resources that can help businesses that want to move here,” she noted. “They include our priority-development- zoned properties, which have an expedited permitting process, as well as our single tax rate. We just want people to know that Palmer is a business-friendly town.”

Leduc said she plans to use the video as a marketing tool at economic-development conferences and other appropriate settings. She told BusinessWest that she and Blanchard came up with the idea for the production after she became economic-development director last year, and they began to tour local businesses with Lenny Weake, president of the Quaboag Hills Chamber of Commerce.

“We wanted to see what types of businesses were in town, make sure the town was meeting their needs, and find out what they needed to help them grow and prosper,” Leduc said, adding that the visits generated a wealth of information and insight.

Blanchard said they visited 16 companies. “Along the way, we met a lot of owners, learned about their businesses, and became excited about what was going on in Palmer. Many had developed a strong niche in the marketplace, and their prosperity has been a well-kept secret,” he told BusinessWest, citing examples that included a foundry, a precision metal company, a construction firm, and a major tree service.

After the trio completed their visits, Blanchard approached M-Pact TV General Manager Bruce Henriques with the idea of creating a video that would focus on companies involved with manufacturing and distribution. M-Pact is the town’s public-access station and airs in Palmer and Monson on channels 7 and 12.

Henriques said he would be happy to do the work at no charge. “I had been self-employed most of my life when I took this job 15 years ago, and I wanted to give the station a more commercial feel and do more for the business community, so it was an ideal fit,” he explained. “I know some of the business owners who are profiled in the video, and they have gone through some tough times over the years. I felt they deserved a break; they supply jobs and are doing some great things people aren’t even aware of.”

Leduc concurred. “We wanted people to understand the types of businesses we have here and why they are successful, and the video speaks loudly about why a business would want to be located in Palmer.”

Beyond simply telling Palmer’s story, though, town officials are also taking steps to incentivize businesses to move there.

Within the TIF zone, for example, a new business that opens there can negotiate an agreement with the town to pay taxes on a graduated rate for a period of no less than five and no more than 20 years. The state also offers incentives connected with the agreement, and Leduc said Palmer Corp. and, more recently, Detector Technology Inc. have taken advantage of the program.

“Palmer Corp. moved into warehouse space and made $1 million in improvements,” she noted, “while Detector Technology acquired a second building and changed warehouse space into manufacturing space.”

Blanchard believes there is plenty of opportunity to build a business in Palmer’s four villages, including space in a mill in Thorndike that is only partially occupied. He also believes the town is an ideal location for businesses due to its location.

“Palmer has access to a number of major highways,” he said, adding that, in addition to the turnpike, Routes 20, 32, 181, and 67 run through town. “Plus, there are a number of freight lines that go into Palmer Industrial Park, and there is an off-loading rail-line facility at Maple Street Industrial Park on Route 20.”

Blanchard cited Sherwood Industries, which is not showcased in the video, as a prime example of how Palmer’s access to rail is beneficial to businesses.

“They bring lumber products here by rail from the Northwest, then distribute them all over the Northeast and into the Carolinas,” he said. “And last year, they received an industrial rail access grant to extend rail service onto their property to allow more products to be brought in and distributed.

“There was also another grant issued to expand rail service in our industrial park,” he went on, adding that many local businesses not featured in the video are doing well, such as American Dry Ice, which distributes carbon dioxide and dry ice to various firms, including hospitals and restaurants.

Leduc agrees there is plenty of room for new businesses. “Palmer Technology Center and Maple Tree Industrial Park have unfilled space, and there are some empty storefronts available in Depot Village,” she said.

The town also has five priority-development sites, and in 2009, the community received a $15,000 grant to conduct a study to determine what was needed in terms of water and traffic control to put the sites to “their highest and best use,” said Leduc. These sites include:

• Olson Farm, 30 acres of open land zoned for mixed business along Route 20;
• The Holbrook site, a downtown parcel of less than a half-acre on the corner of Route 20 and Bridge Street;
• Chamber Road Industrial Park, a site containing two parcels of shovel-ready land totaling 10.7 acres;
• Thorndike Energy, an old mill complex located off Church Street on five acres with the potential for 90,000 square feet of renovated building space; and
• The area formerly slated for the casino, 152 acres across from the turnpike exit controlled by Northeast Realty.

Leduc, Blanchard, Fortune, Henriques, and other people who helped create the video hope it will inspire new businesses to consider moving to these sites or other available properties in Palmer. However, Blanchard said the production has already had an impact within the town.

“It opened new lines of communication between town officials and existing businesses, which we hope will continue whenever an issue comes up and they need support,” he told BusinessWest.

Meanwhile, the screening before the Town Council probably inspired a vote to make the town more business-friendly, or at least not less so.

“They were scheduled to vote on the tax-classification rate that night,” said Blanchard. “Although we have historically maintained a single tax rate, the council was considering changing it because of rising costs. But the video made them recognize the value of maintaining the single tax rate, and they voted to continue it to help the businesses in Palmer.”

It is the hope of those involved that the video, not to mention the many other initiatives undertaken by town officials, will yield more success stories to relate in the years and decades to come.