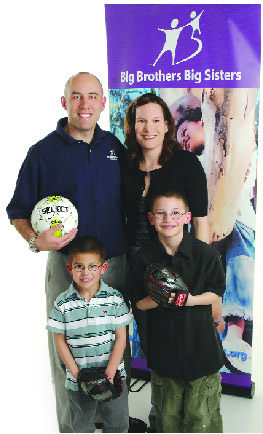 It’s a belief he is passionate about, and one that has led him year after year to raise thousands of dollars for Big Brothers Big Sisters of Hampden County via its annual Bowl for Kid’s Sake.

“Children are the most vulnerable population,” he said, adding that he was lucky to grow up in a nurturing family with parents who were positive role models.

His desire to ensure that every child knows that someone cares inspired Beturne to choose his career field and go above and beyond his job duties. “A lot of times we make things very complicated,” he said. “All I ask folks to do is get involved and have fun with kids. To me, fund-raising is not a big deal. It’s just opening the door for other people to get involved. Someone may not be able to take on the commitment of becoming a volunteer for a year. But they can come and bowl with us, and that will help.”

Beturne knows what it means to be busy. Besides his full-time job, he and his wife, Julie, have two sons, ages 7 and 5; he coaches their soccer teams and his younger son’s tee-ball team. Such involvement led him to create a Lunch Buddies program with his executive director, where the only commitment required is to have lunch with a child for an hour once a week at their school.

Beturne is a Lunch Buddies volunteer himself for a third grader. “We spend our time playing games and having fun. Last week, we played football with all of his friends,” he said.

“I believe in being a role model for children who want or need one. There is nothing more powerful for a child than realizing that someone is in their life because they want to be there, not because they have to do it. That’s where the magic is, when someone cares enough.” —Kathleen Mitchell