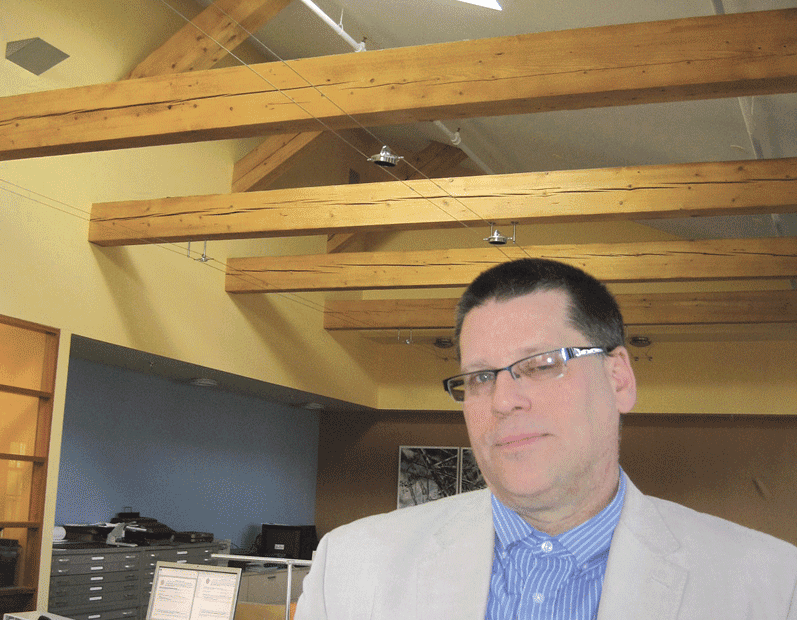 Architects Are Seeing the Light — and So Are Their Clients 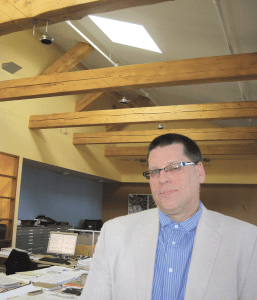 Kevin Chrobak feels that the public is increasingly motivated by the industrial design of products from companies like Apple and manufacturers with a high design aesthetic.

Kevin Chrobak, principal architect for Juster Pope Frazier LLC, doesn’t have a single light on in his conference room, or in his spacious office area that seems to ooze creativity. He doesn’t need any on a bright day.
His Northampton-based studio, located in a former brick mill building dating back to the 19th century, has the large full-story windows reminiscent of a time when the workday was governed by the sun.
“A lot of the concepts of this building, and others like it, was that you wanted a lot of daylight and a lot of volume of space, so the notion of ‘day lighting’ was a concept from before 1900,” said Chrobak. “For example, its 8:30 in the morning and there’s not a single light on, and it’s perfectly adequate.”
Day lighting, a new buzz term in the architectural realm but a concept that actually grew out of the Industrial Revolution, is back in vogue. But not just because of the cool aesthetics; rather, designers are drawn to the reduced costs for lighting, heating, and cooling when advanced, energy-efficient windows replace those that are more than 100 years old — which, in Chrobak’s case, they did. 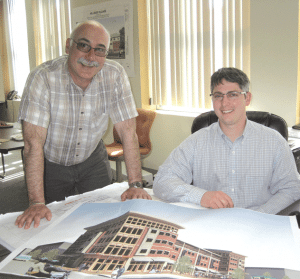 Greg Zorzi, left, and Christopher Novelli see a return to city living in downtown structures, prompted by the younger generation’s demand for intelligent use of existing resources.

In addition to redesigning old or historic structures, Jonathan Salvon, principal at Kuhn Riddle Architects Inc. in Amherst, has seen a trend toward more-modern design styles. His firm is known for designing the new UMass Amherst marching band building, the Amherst Police Department headquarters, and the new broadcast facility for New England Public Radio (NPR) in the Fuller Block on Main Street in downtown Springfield.
“Organic forms, in general, are currently quite popular at the moment with generally modern architecture,” said Salvon. “And I mean modern with a capital ‘M.’
He was speaking of a rebirth of architectural Modernism, which roughly spanned the time between World War I and the early 1970s, and is generally characterized by simplification of form and an absence of applied decoration.
While Chrobak doesn’t see a specific ‘look’ today, he does see imitation, and more client attention to the carefully designed look of popular commercial products.
“There’s a saying that some of the best ideas out there are stolen, but you do see influences start to creep from one project to another,” said Chrobak. “There certainly is influence that runs from magazine to magazine, and I think the public is becoming more cognizant of design as being important in their lives.”
This, he feels, is motivated by the industrial design of products from companies like Apple, and manufacturers that have a very high design aesthetic. “That has helped to bring higher awareness of design in all different disciplines.”
Other advances have taken the act of designing architecturally to a whole new level. The advanced technology of computer-aided design, more affordable green-building products, urban awareness, and understanding new work/life behaviors have all contributed to expanding the choices that today’s architects have to make, both in form and function.
As the construction industry claws its way back from the most severe recession in decades, BusinessWest talked with area architects about the trends, and attitudes, shaping their industry. Overall, they are invigorated to see the public more demanding of creative design and energy-efficient function, which is giving way to a new generation of sustainable and smart structures that will reshape Western Mass. buildings, and even cities, in the years to come.

Trickle-down Effect
Any talk these days of architecture or construction will immediately become a conversation about green building. Leadership in Energy and Environmental Design (LEED) is a voluntary, market-driven program that provides third-party verification of green buildings. It provides building owners and operators with a framework for identifying and implementing practical and measurable green-building design, construction, operations, and maintenance solutions.
Even locally, as with every new program, costs eventually do come down, due to competition and becoming an industry standard.
“There was a time when doing a LEED building was a premium cost, but the industry has ramped up to meet the demand,” said Salvon. “So it’s not the premium that it used to be.”
Greg Zorzi, president of Studio One Inc. in Springfield, agreed.
“We’ve done a couple of LEED projects recently, and I don’t think there was a substantive percentage more that the owner paid to get a LEED building,” he said. “And if they did pay a bit more, they’re going to achieve that back in the energy savings.”
Globally, on the leading edge of the green-building movement is a strategy called biomimicry: using patterns in nature, particularly in biological systems, to inspire innovative and more-efficient designs within architecture and engineering. While global interests are not immediately adopted by those in the Western Mass. area, or even the New England region, the efforts are important.
Christopher Novelli, an architect at Studio One, sees biomimicry at this juncture as more limited to what he called ‘paper architecture’ — student work or architects’ projects that are mostly experimentation with the design of buildings that will never get built.
But design movements have to start somewhere, and there’s a trend, Salvon said, toward more attention to organic design or, rather, more care toward natural materials in either the form of the building or in the materials within. His examples: bamboo flooring, grass or bark-like wall coverings, and unique ceiling products that mimic outdoor scenery.
But to get some of those designs takes experimentation and advancements in technology, specifically computer-aided design and computer-driven routering that didn’t exist a decade ago.
Zorzi told BusinessWest that the future emergence of unique types of biomimicry, or new organic-design products, requires students and architects to write computer code and bypass the traditional design process. Thus, the design is then carved out from large-scale computer-aided machines.
“The computer code has its parameters and sort of creates itself, but that opens the door to experimenting with new forms, which find their way into more traditional building here,” Novelli added.
“Where the more experimental buildings tend to be constructed,” Zorzi added, “is based on where the money is — Dubai, Tokyo, Singapore, for example.”
Salvon agreed. “Some of the newer elements are due to high-end computer-modeling software with deep-pocketed backers, and allow for fabrication that is different than conventional construction.”
While this extremely advanced technology has not yet entered into mainstream architecture and construction, it is an emerging technology that will change the way architects and contractors work in the future, Zorzi added.
“But, yes, computers are influencing everything,” said Chrobak, whose firm is known for its designs of the unique Eric Carle Museum in Amherst and the Elms College Center for Natural and Health Sciences, which is currently under construction in Chicopee.

Staying Power
“A common theme in our market is that a lot of work is renovation work — so how do you take a new design aesthetic and work it into an existing building that may be more than 100 years old?” Salvon asked rhetorically, as many of his clients have as well.
“Not just design, but sustainability has become extremely important, maybe moreso due to the downturn of the economy; folks want their building to be more efficient,” he said.
One of the more obvious energy-efficiency products has been glass.
Its usage has typically been a symbol of energy inefficiency, as heat exchange in large, translucent surfaces is higher than in insulated walling. But new glass systems are changing that.
As an example, Zorzi noted ‘curtain-wall’ systems that are the essence of the high-performance envelope. While not a new concept, what the systems are made of, and what they do now, certainly is.
“Years ago, you wouldn’t be able to achieve having full walls of glass,” he said. “There would be so much heat loss or gain, and as stylish as it is, it wouldn’t be functional.”
A glass wall today would have a ‘double-skin’ system — two layers, filled with a gas that allows the building to passively cool itself. But the quality of the glass, the curvature, and the ability to withstand wind and hold snow loads, said Zorzi, is what makes him marvel at buildings such as Springfield’s new federal courthouse on State Street, which makes heavy use of glass.
In his work, Chrobak also sees a lot of adaptive reuse, and he feels it is motivated by clients’ project costs.
“If you’re building with a shell, it’s often cheaper than building from scratch, so the concept of ‘reuse and recycle’ applies to buildings as well.”
Cities, in general, are seeing an enormous amount of reuse of former manufacturing buildings as well as old apartment buildings.
Both Zorzi and Novelli see a return to city living in those structures, prompted by the younger generation and their awareness of, and demand for, intelligent use of existing resources and the environment.
“Some people think that suburbs are the next ghettos,” said Zorzi.  “When you see that return back to the city and how it relates to architecture in a single building, you have to shift your design focus to create more multi-purpose spaces, mixed-use, and live/work spaces.”
An example is more office and retail on bottom floors and living spaces above. Technology allows people to work from anywhere, and many companies are allowing employees to work from home, which has increased overall demand for office areas in new designs, regardless of the client’s age. “So the designs that we’re doing have to relate to that,” said Novelli.
But city living involves not just the redesign of one building these days, said Zorzi, but entails the entire urban environment around that building, which is a demand of the public.
“I think a good local example of that is the proposed casino,” Zorzi told BusinessWest. “We have MGM Springfield with an outward-facing real urban focus with livened streetscapes and retail shops, and bringing in the local businesses is part of that flavor. Then you had Penn National with an inward-facing focus. You look at the traffic patterns — the traffic comes in, gambles, and leaves.”
“The MGM proposal is very indicative of the trends that we’re seeing, more of a focus on the urban element, rather than the one isolated building,” Novelli pointed out. 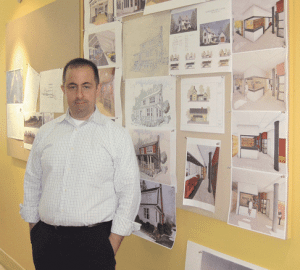 What the future holds for architects is a series of new challenges and opportunities.
The American Institute of Architects has put forth the 2030 Challenge, which Novelli described as a step-by-step pledge for architects to design ‘net-zero’ buildings, or those that literally produce their own energy through mini-turbines, solar power, high-performance building products, and, of course, smart design.
“There are always new materials and new approaches,” said Salvon. “And a lot of manufacturers are putting a lot of money into R&D to develop new materials to either meet existing demand or create new demand.”
And as the competition heats up for more sustainable products for both new construction and adaptive reuse, the prices will flatten out and the heyday of those net-zero buildings is nearer than ever.
In the meantime, architects continue to have designs on continued growth in an industry where the future is as clear as a glass wall.