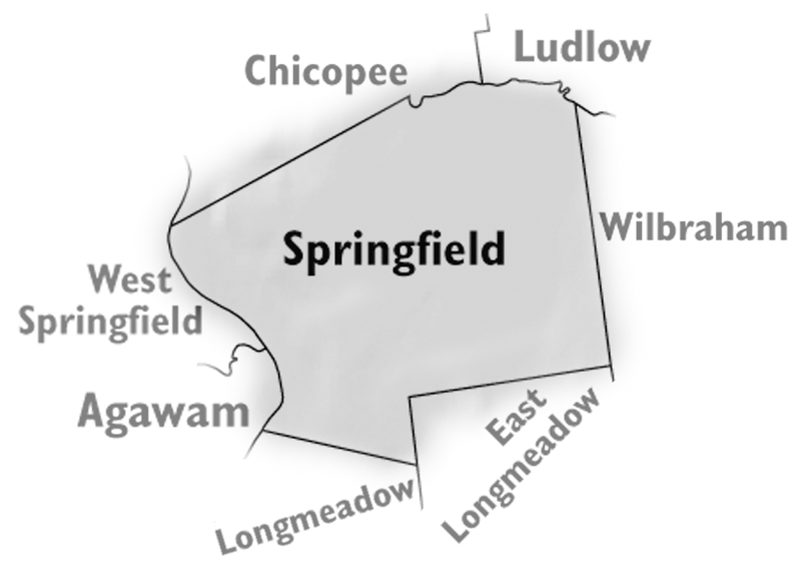 Officials Say City Is Positioned for a Comeback 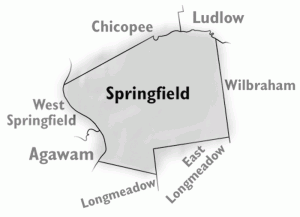 From his office looking out on the sidewalks of Main Street in Springfield, Russell Denver can see firsthand what is happening in the downtown business district.
As president of the Affiliated Chambers of Commerce of Greater Springfield, Denver knows that a lot of work needs to happen in the city he’s called home for most of his life — and, for all but four years since 1980, where he’s worked as well. But some of the biggest points to address can’t be solved quickly by a shovel in the ground or a ribbon-cutting ceremony.
Like many others who talked with BusinessWest, he said that there’s a perception of Springfield’s safety and vitality that isn’t supported by hard evidence.
“Springfield is a big fish in a little pond,” he explained. “What happens is that the city gets magnified. For instance, do we have crime? Yes. But if those same statistics were reported in Boston, no one would even notice it.”
Addressing the empty storefronts downtown, he said, “I’m going to put a different spin on things. If you go around, you see a fair amount of vacant office and retail space. Well, that’s an opportunity, rather than a challenge. As things start to turn around, we’re going to have the locations ready so that people can move right in.”
Such glass-half-full enthusiasm is expressed by others as well.
Springfield’s chief development officer, John Judge, said that during the current down market, City Hall has been strategically addressing both strengths and weaknesses in order to make strides when the economy rebounds. He said that working toward a “21st-century downtown” is at the top of his priorities, and while the to-do list is not short for that goal, a few achievements have already been checked off as underway or complete.
In this, the latest installment of its Doing Business In series, BusinessWest takes an indepth look at the region’s unofficial capital. While there are problems shared by most every municipality across the nation after a couple of tough years, Springfield has had some of its own dark spots that are now relegated to the history books. The Finance Control Board left just under a year ago, turning the city’s red ledgers back on track, and in the recently-released budget for fiscal year 2011, Mayor Domenic Sarno unveiled plans for increased hiring in the public-safety departments and a priority for “strong and effective fiscal management,” according to the report written by Lee Erdmann, chief financial officer for the city.
Talking with various officials, a picture emerges of a city that has been maligned for what it both is and isn’t. And in the coming months, some of that will be changing, helping to drive home a important message, said Judge. “We’ve got to make sure that everything we do says that Springfield is open for business.”

The Center of It All
Denver identified one historic roadblock for business development in the city: a lack of developable real estate.
“But I think that a lot of people have done some great work, and now there is land for new construction,” he countered. “You have property at Smith & Wesson, Chicopee River Business Park, in Indian Orchard, for light industrial. So now, there’s plenty of land out there for new tenants, or for expansion and new buildings.”
Those commercial properties have been in good shape in the last year, and these pages have reported with due fanfare the addition of several big-ticket incoming businesses like Performance Food Group and the F.W. Webb Co., among others.
While those outlying properties are marketable and in the spotlight, downtown can also share some of that limelight. Denver called the four-acre York Street Jail site along the Connecticut River a “home run,” increasing developable land along what is rapidly becoming a true destination, featuring several popular restaurants bracketing the Basketball Hall of Fame.
He shifted his focus to the central business district, the area loosely defined by State Street and Court Square to the south up Main Street to the property north of the train station. “If there is only one thing that happens in 2010,” he said, “filling the vacant federal building is an absolute winner.”
Nick Fyntrilakis agrees. As the assistant vice president for Community Responsibility for MassMutual, he has been working closely on a variety of projects for the city, his hometown. He called the return of occupants to the federal building at 1550 Main Street “a key to revitalization for that section of the city.”
Plans are underway for the Springfield School Department and Baystate Health to become anchor tenants in the structure, turning the lights back on in the prominently located building that has been vacant for more than a year.
“One of the impacts from 9/11,” he explained, “is that the building was cordoned off from the street with Jersey barriers. Before that, the building was accessible via airwalks to Tower Square, it was accessible to the parking garage behind it, Uno’s was right next to CityStage, and it was a very active night spot. But all of a sudden, you lost those people that weren’t there having dinner, and the building became this real island, an air bubble of inactivity, really.
“Not only will the building in use again mean bodies downtown,” he continued, “but it flips the switch to make it another welcoming section of the city. I think the barriers and the access really had an impact on the psyche of that section of Main Street.”

Accentuate the Positive
Fyntrilakis said MassMutual is heavily invested in seven major revitalization initiatives in the city, four of which are moving “at various speeds and progressions.”
“The Corridor Storefront Improvement project is off the ground,” he continued. “Some grants were awarded last week, and you’re going to see more of that in the future. Basically any storefront along Main or State streets can receive up to $10,000 in grants, with a $2,500 match from the owners, to go toward improving their storefront — awnings, lighting, what have you. You’ll start to see pockets of those pop up.”
In addition, he mentioned projects at the former Indian Motocycle complex, market-rate housing at the building on State Street soon to be vacated by the School Department, infrastructure improvements along the State Street corridor, and the revitalization of Union Station for high-speed commuter rail.
While these are projects that will provide a much-needed boost in the right direction for retail and market-rate housing — two fundamental concepts for urban vitality — Fyntrilakis said that there are still specific, important building blocks that need to be addressed. In his opinion, the historic building at 31 Elm Street, directly across Court Square from City Hall, is a project whose importance can’t be understated.
“That property could potentially impact so much,” he said. “Moving north across Court Square, then to the MassMutual Center side, the lower part of State Street, and the beginning of the South End … getting that project online in some shape or form is absolutely critical.”
From a commercial real-estate perspective, William Low said that progress and revitalization at Elm Street “needs to happen.”
Low, senior vice president at NAI Plotkin on Taylor Street, said that, if that property is redeveloped, it will fundamentally change the landscape in downtown Springfield.
For reference, Low mentioned projects in Pittsfield that could very easily be duplicated for the vacant space, saying that, if it could happen there, Springfield can’t be far behind.
“Pittsfield has done a good job of revitalizing its downtown,” he began. “On the ground floor, you essentially just give away the real estate, just getting those spaces filled. Every time a third-tier city tries that, it works. Go to Pittsfield now and see how well it’s worked.
“Five or ten years ago,” he continued, “people in my business weren’t even considering that city. But now they are.”
Echoing just about everyone with an informed opinion, Low said that market-rate housing is of the utmost importance to foster a vibrant downtown economy. “And give them a reason to live there,” he said, counting off galleries, shops, and entertainment venues, “most of which are already here,” he added.
Citing the Quadrangle museums, Symphony Hall, Center Stage, and the MassMutual Center, he shrugged and said, “if housing has made a difference and has worked in other cities with so much less to offer, then it certainly could happen here.”
Denver said that, by realigning the income demographic for downtown with market-rate housing, the retail that consumers have long expected for the city might be a reality, but not until there are those numbers to support them.
“People complain sometimes about the type of retail that comes into downtown,” he said, “but look at the income demographics. No one should be expecting that Nordstroms will be coming to downtown — the market doesn’t support that. But should we be looking at the Gap or Old Navy types of stores, and start reaching for things like that? Absolutely.”

Eliminate the Negative
An important facet to reining in that desired demographic will be to change some perceptions concerning the downtown area. Low said that, when all one hears on the news are stories of violent crime in Springfield, the downtown becomes the symbolic hub for all of those ills.
“Sure, there’s crime in Springfield,” he said. “But it’s not in the central business district. The reality is that once you’re here, it’s nothing that you are even aware of.
“Having said that,” he added, “I would like to see more of a police presence. Every once in a while, you’ll hear talk about some kind of criminal activity, and for the next few days you’ll see police on the streets, walking around. I wish they would just stay there. That negative perception is a genuine challenge for the retail and restaurant sectors.”
From his desk at the chamber, Denver said that one of the biggest hurdles the city needs to address is the commercial real-estate tax rate, the highest in the state.
“We did a study that we handed to all city councilors last year showing that, consistently, for similarly sized properties in similarly-sized industries, you pay a higher per-foot real-estate tax than in any of the surrounding communities,” he said. “That needs to be addressed first and foremost.
He cited tax increment financing that was made available to a number of large commercial ventures in the city, among them Performance Foods, Titeflex, and Liberty Mutual. “My point to the city is that, if you can give those tax breaks — and I’m very happy you did — what about everyone else?” he asked.
Put into context, however, these hurdles don’t overshadow his feeling that the city is positioned for a comeback.
“I’m of the belief that there is a lot of good already going on downtown,” he said, “There have been nights this past winter where you had Symphony Hall sold out, CityStage sold out, and the Falcons with 5,000 people. Those people do go to restaurants, and there is the possibility that they could support strong retail.
“The product is there,” he added, “and it’s good. We need to make sure it continues to be good, and people will come.”