Thinking Outside the Pillbox

Dr. Christopher Keroack, like so many who grew up in the Northeast, recalls a childhood visit to Riverside Park in Agawam, now known as Six Flags New England. Back then, at the center of the grounds was a crowded area known as the International Plaza, connecting the north and south sides of the amusement park.

He was 7 years old on this particular visit, and his mother told him to hold her hand while crossing the plaza, so he did — he thought. “The density of the crowd resembled a New York nightclub, but I struggled through it and emerged holding my mother’s hand — only, when I looked up, I was shocked to find the hand wasn’t hers.”

He describes the feeling — still resonant decades later — of being lost and frightened, and his decision to go to the park’s magic show, a location he and his mother both knew well. He sat down in the front row and cried as the show began, but the plan worked — his mother intuitively found him there a short time later, and all was right with the world again.

Keroack, director of Pioneer Valley Weight and Wellness Center in Springfield, tells this story at the start of his new book, Changing Directions: Navigating the Path to Optimal Health and Balanced Living, and retold it recently while sitting down with BusinessWest. The point is that being lost as a child is an alarming experience, and returning to a place of safety and familiarity is a hallmark of finding one’s way again.

“Part of me believes this is what has happened in the medical field,” he told BusinessWest. “Once compassionate healers, our field has transitioned into protocols, ICD-10 code diagnoses, prior-approval paperwork, and endless uses of drugs.”

As a result, Keroack — and many of his colleagues, he believes — long for a return to the “golden years” of medicine, when one-to-one relationships with patients were richer, and when doctors were committed to healing and compassionate caring, not a sea of protocols and quick-fix prescriptions. “I believe,” he said, “that we can return to those days.”

His book, published earlier this year, is a primer on the philosophy of ‘functional medicine,’ which is, at its core, a blending of the ancient arts of medicine, including Eastern medicine, and the modern approaches of scientific, Western medicine. Having studied both, Keroack has crafted a practice in the Valley that incorporates elements of these two worlds and demonstrates to patients why they should — and do — work in tandem.

“It just fits into everything all physicians originally wanted to believe in,” he said. “We went into medicine for the purpose of helping and healing people.” The book — which he calls “a field guide to navigate the confusion of healthy living” — is an effort to help people understand these concepts and put them into practice.

He likens functional medicine to a tree. The roots of the tree — unseen but taking up as much space underground as the branches do above — are what nourish the tree, not the leaves. The leaves may show the outward signs of disease,  but the deeper problems originate in the roots. “Functional medicine,” he notes, “sees the roots and knows that, by nourishing the roots, the leaves will grow.”

Another metaphor, he said, sees the body’s systems as a flowing stream, one in which pollutants and chemicals from a factory upstream are contaminating the water, creating imbalance and toxicity. The ‘downstream’ approach of Western medicine is to put a water filter on the kitchen faucet — but what about the water in the dishwasher, shower, and washing machine? Ideally, the correct approach would be to remove or divert the pollutants and chemicals at the source. That, in a nutshell, is functional medicine.

The core of this philosophy revolves around what Keroack calls the “fab five” — food, movement, stress, sleep, and relationships — and the way they intertwine to impact one’s overall wellness.

“If we ate the correct food, stayed up on hydration, went to bed on time, had our debts paid, had harmony in our marriages, and got out of the chair and moved around, we would be radically healthier. But we don’t do these things, because we rely on pills, potions, and lotions.”

One barrier, he said, is that Western physicians are trained in pharmacology and diagnosis codes, so they get locked into that pathway. “But I get to have real conversations with people about these foundational factors, and then they get better.” 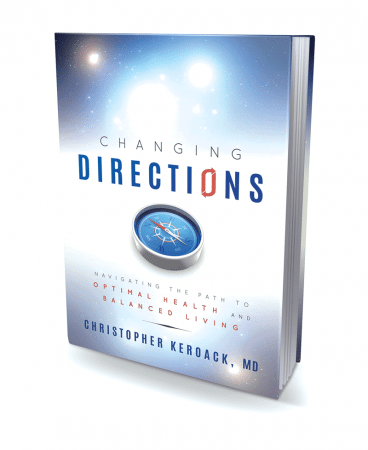 Keroack is board-certified in internal medicine and bariatric (weight-management) medicine, and originally built his practice around weight loss, moving gradually into a broader wellness focus, where patients lose weight as just one benefit of a total lifestyle shift. But in addition to his formal training, he has certifications from the Institute of Functional Medicine and the Cenegenics Education and Research Foundation for Age Management Medicine.

Beyond the ‘fab five,’ each personalized health and wellness plan takes into account five foundational imbalances: nutrition, metabolism, inflammation, detoxification, and oxidation. Together, he calls them the ‘star of wellness,’ noting that “all five aspects of your health are equally important. A problem in any one leads to imbalance with the others.”

According to the Institute of Functional Medicine, “functional medicine addresses the underlying causes of disease, using a systems-oriented approach and engaging both person and practitioner in a therapeutic partnership. … By shifting the traditional disease-centered focus of medical practice to a more person-centered approach, functional medicine addresses the whole person, not just an isolated set of symptoms.”

That’s why it’s important to spend time with patients, he explained, understanding their histories and considering the interactions of their genetic, environmental, and lifestyle factors that can influence chronic disease — in a way that goes far beyond mere diagnostic codes.

At the root of functional medicine, the book notes, is the idea that the body, given the right balance of food, movement, stress, sleep, and relationships, will take care of itself.

“It’s not that complicated, but it does require discipline and planning,” he told BusinessWest. “At the same time, you can find the necessary components at the supermarket, in the backyard, and in the bedroom.”

That’s not to say medications and technology don’t play a role in modern healthcare; they certainly do. The key word is balance — and it’s safe to say many doctors lean much further in the opposite direction, putting far less emphasis on elements like food, stress, and positive relationships than they do on a prescription.

“The Western-medicine approach to illness looks at things from the bottom up — once we get sick, we can do something about it,” he went on. “Functional medicine looks at things from the top down — what can we do not only to avoid getting sick, but to optimize your health? I’d like to think most people want that. Rather than just not having diabetes, they want to be in the best health of their lives.”

Keroack claims that most people eating correctly — say, a Mediterranean diet with plenty of fruits and vegetables from all the color groups — are getting the vitamins and minerals they need from their food, but dietary supplements are often helpful. But the average consumer gets overwhelmed going into stores that sell supplements because no one has explained what will work best for them.

“I had an elite hockey player in the other day. He wanted to take some performance-enhancing supplements, but the ones he was using were all turmeric and ginger, which are anti-inflammatories, which are fine afterward, but they don’t enhance performance; he needed carnitine and taurine. Somebody sold him the wrong thing, based on the chemistry of these botanicals. Just like I can’t play hockey at his level, he’s trusting people to give him the right stuff.”

Another patient, diagnosed with yeast overgrowth, was taking a supplement better suited for liver cleansing before Keroack steered her differently.

“She had spent her hard-earned money on something intended for something else,” he said. “If you pick the wrong things, spend your money, and get frustrated, you think, ‘that’s one more provider that has not helped me.’”

Keroack, on the other hand, wants to teach patients how to maintain their own health so they’re not as reliant on medications and other trappings of modern medicine.

The bottom line, he went on, is that the simple tenets of functional medicine can seem, frankly, too good to be true to a generation raised on pharmaceutical marketing. “But if you change your food, change your movement patterns, change your stress levels, you’ll get better. And it’s logical and intuitive that you would.”

Keroack’s father was an emergency-room physician decades ago, using much more primitive technology than doctors have available to them today — and he wouldn’t recommend a return to that. But why, he asks, not marry today’s capabilities with the sensibilities of yesteryear, a practice of medicine based on communication, understanding, and the doctor-patient relationship?

“I’m shooting to return to the golden age of medicine, just not using old-school technologies,” he explained. “I understand that technology has changed, but I’d like to see our policies and protocols match the information that’s available. There is legitimacy to the colors in fruits and vegetables, the inflammatory effects of gluten and dairy, the chemical effects of pesticides and herbicides and pollutants. There’s real science behind that. We don’t have to stop at lowering calories and walking 10,000 steps.”

In the end, when he thinks of how Western medicine has evolved, he returns to that story of a 7-year-old at Riverside losing — and then finding — his way.

“We think we’re holding on to a hand we trust, only to go through the journey and find it’s not what it was,” he said. “We’ve been disheartened, disillusioned. Patients are constantly telling me, ‘doctors have no time to spend with me and listen; all they have is pills.’”

Through his practice — and, now, his book — Keroack is doing his part to change that paradigm.