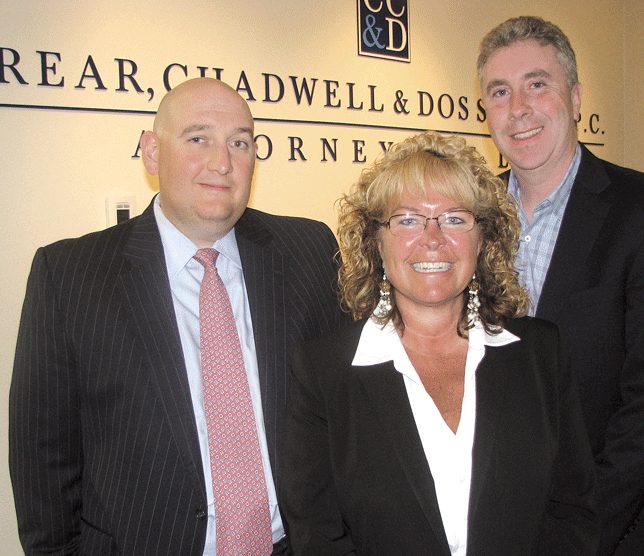 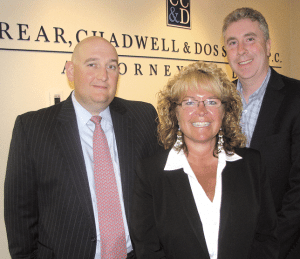 Tony Dos Santos remembers thinking — actually, the word he used was knowing — that it was definitely time for a career course change.
And as he talked about the thought process that led him to that conclusion that he needed to leave the larger-law-firm environment — in this case the Springfield-based firm Robinson Donovan — and find an opportunity to put his name over the door, he struggled somewhat in his efforts to describe it before eventually finding the terminology he was looking for.
“I just wanted to be in much greater control of my destiny,” he told BusinessWest. “I realized that being more of my own boss, being in a smaller place where there’s more flexibility and less structure, was what I was looking for at this stage in my career.”
Kimberly Davis Crear and Jim Chadwell could certainly relate.
They had come to the same basic conclusion about their careers several years earlier, and decided, separately, to leave Robinson Donovan and start their own firm. Crear did so in 2003, when she partnered with two former Robinson Donovan partners, and Chadwell joined that firm a few years later. He and Crear have remained together (the two other partners left to start their own venture), and built a solid reputation — and sizable portfolio of clients — in the realm of workers compensation defense work.
Late last year, the partners began talking with Dos Santos about broadening the base of their firm by adding his name to the letterhead and his expertise — commercial real estate and general business law — to the resume.
Those talks, which coincided with Crear and Chadwell’s need to find new quarters — their lease was up in space within the Fuller Block that will become the new home to WFCR — concluded that this was a good fit on many levels.
“We all knew each other, we’ve all worked together … we had a lot of history together,” said Dos Santos. “It’s helpful when you’re making a move to know the people you’re going to be working with and respect them.”
Chadwell agreed, and noted that the three lawyers, who have been referring clients to each other steadily for years, complement one another, and together offer a base of specialties that provides strong growth potential.
On April 1, the three partners and seven additional staff members settled into 3,500 square feet on the third floor of Monarch Place. And with the settling in period behind them, they’re focused on continued growth of their own practices and, in Dos Santos’ making that transition from lawyer to business co-owner.
For this issue and its focus on business law, BusinessWest talks with the three partners about where they eventually want to take this firm, but mostly about that notion of controlling not only their destiny — but that of their business venture.

Making Their Case
As she talked with BusinessWest about the feel of a small boutique firm and what she likes most about it, Crear pointed to the logo on her new business card.
The square image featuring three initials (‘C,’ ‘C,’ and ‘D’) as well as the ampersand, was selected after input from all three partners, who had an active role in the design process, which went fairly smoothly, she said, adding that such democracy — not to mention quick decision-making — doesn’t generally prevail at most large firms.
“I have a comfort level with this setting that I just didn’t have in a larger firm,” she explained, noting that over the past decade or so, she and Chadwell have become well versed in what both described as the “business side” of law — meaning everything from hiring personnel to handling a payroll to leasing a copier — and out of necessity.
Dos Santos, meanwhile, is still negotiating a learning curve.
“When you’re in a large firm, you don’t deal with any of the real day-to-day issues,” he said, referring to everything from IT matters to lease agreements, which he handled in this case. “You have either an executive committee or a professional executive who’s making all those decisions, and you’re just focused on practicing law; now, you’re more of a business person practicing law.”
While that transition process continues, the three partners are working to build the business they’ve formed. And for Crear and Chadwell, that means efforts to grow their already substantial portfolio in workers compensation defense work.
Both benefited substantially from the tutelage of former Robinson Donovan partner Jim Turtollotte, said Chadwell, describing him as the dean of the local workers comp defense bar, and have steadily expanded their client base over the years.
It now includes most all of the major workers comp providers, as well as self insured companies and groups, not only in Western Mass. but across the state as well.
And while such defense work generally involves the carriers, there is considerable employer involvement in such matters, said Crear, and thus the opportunity for referrals and a chance to do more and different types of work for those on the client list.
“I often have someone from the corporate piece of the company with me watching the workers comp claim,” she explained, “and as a result, we’ve been able to establish a number of relationships.”
And this is why Dos Santos is an important addition for the firm.
A partner at Robinson Donovan when he left that firm, Dos Santos specializes in all facets of commercial real estate, commercial finance, and general business law. He has significant experience representing developers, investors, and lenders regarding complex commercial real estate transactions, including acquisitions, dispositions, leasing, financing, zoning, and permitting, and recently has cultivated a niche involving affordable housing initiatives for formerly homeless veterans, including work with the nonprofit work Soldier On.
“They’re expanding exponentially, and I’ve done a lot for them,” he said of Soldier On, adding that one current project involves the former police training facility in Agawam, while another involves Veterans Administration property in Leeds.
When asked if there was anything approaching a five-year plan for the firm, Chadwell laughed and said, “we signed a five-year lease here — that’s our strategic plan.”
Elaborating, and turning more serious, he said the new venture, with its broader range of specialties, has solid growth potential. Where, when, and how that growth takes place is a function of how the three partners are able to expand their portfolios — possibly necessitating the need for more help — and whether there are logical additions to the roster of specialties that would bring more lawyers to the firm.
One possible avenue for growth is the broad realm of employment law, said Chadwell, adding that it would be a natural fit given the general business law work handled by Dos Santos and the workers comp defense services that he and Crear provide.
“I could see employment law being a tremendous fit going into the future with the nature our practices,” said Chadwell, noting that all three partners already refer out a considerable amount of work in that area. “And it’s an ever-growing practice area.”
The firm has the right of first refusal on some additional space on the third floor, said Chadwell, adding that it is hope — and expectation — that there will be need to exercise that right in the near future.

Final Arguments
As she gave a quick tour of the firm’s new offices, Crear noted that she swung a swift, mutually beneficial deal with Chadwell to take what would be considered the corner office. Dos Santos, meanwhile, got a consolation prize of sorts — the office closest to the conference room.
Such quick, easy decisions usually don’t happen at larger firms, where bureaucracy and rules often dictate such matters.
But they are part and parcel to life in a small boutique firm, where the principals are firmly in control of their destiny — and determined to make the most of that opportunity. 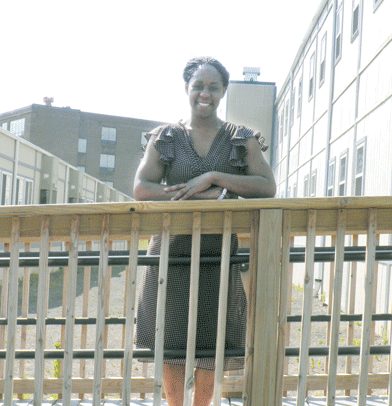