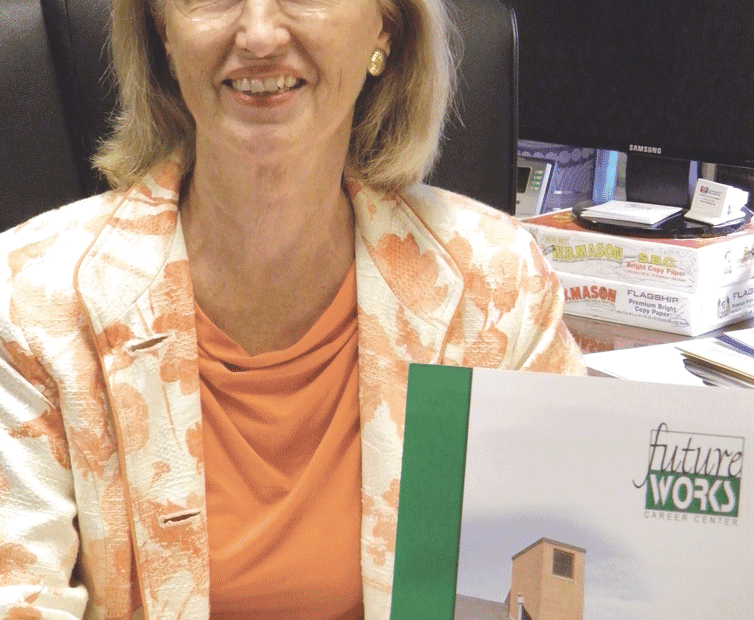 One-stop Career Centers Rely on Partnerships to Fulfill Their Missions 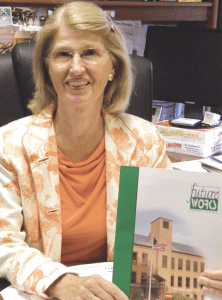 Executive director Rexene Picard says FutureWorks has made changes in the way the agency serves customers due to shifts in the economy and advances in technology.

When one-stop career centers began opening across the state 16 years ago, David Gadaire said, the mantra connected to them was “no wrong door.”
“The concept was one of universal access,” said the executive director of CareerPoint in Holyoke. “If someone needed to brush up on their skills, get help with writing a résumé, learn to network, or get more training, they could find it under one roof, whether they were a school-age person or an older worker.”
The concept was forward-thinking, but the funding was never in line with the complexity of need that job seekers brought to the table. Still, the problem wasn’t nearly as evident in the early years when the economy was flush.
“For the first few years we were open, 50% of the people we saw were employed,” said FutureWorks Executive Director Rexene Picard, explaining that many came to the center to brush up on skills or take a Saturday class.
Gadaire agreed. “In the beginning, we had enough resources. It was a different game then, and the funding we had supported people who needed to harness their skills,” he said.
FutureWorks and CareerPoint achieved national recognition in 1998 when they were selected as Career Centers of the Year by the National Alliance of Business.
“It was a tremendous honor, but the funding kept dissipating as the numbers grew,” Gadaire said. “We were originally chartered to serve 7,000 people a year, and last year we served between 14,000 and 18,000. The numbers have gone up steadily, and although they have plateaued in the last few years, it is only because our capacity is so overstretched.”
The unemployment office has a representative at both centers, and many people confuse the entities. But the former is run by the state, while the one-stops were established through competitive charters.
CareerPoint was chartered as a nonprofit and opened 16 years ago via a partnership that included the Greater Holyoke Chamber of Commerce, Holyoke Community College, the Department of Transitional Assistance, and the UMass Donahue Institute. “They joined together because there was a disconnect between the jobs that were available and the skills of the people available to fill them,” Gadaire said.
The story of FutureWorks is quite different. It was opened in 1996 as the first one-stop in the state by the Employment Training Institute in Ringwood, N.J., owned by Ken Ryan. Granting a charter to a private, for-profit corporation was controversial, but “it gave us a chance to think outside the box,” Picard said. “In the beginning, we said that what we did was not going to be about numbers, it was going to be about customer service. We had welcome centers and made people lifetime members. We could have fallen under the realm of social services, but we felt we were role models for job seekers and wanted to reinforce soft skills, so the center had the atmosphere of a business,” she told BusinessWest.
Although their evolution has been different, it soon became apparent that the needs of the people who came through the doors of both centers were complex, and the funding to help them was far from adequate. “In 1998 when the Workforce Investment Act was passed, the intent was that community partners would support the one-stops. But it never happened,” Picard said.
Still, they have found a way to meet a myriad of complex challenges. “We don’t tell our story well, and it’s a very impressive story,” said Gadaire. “But if 10,000 more people came to our door, I don’t know what we would do.”

Complex Situation
After CareerPoint received its award, it became even more committed to its mission, said Gadaire.
“Universal access meant we had to serve the older worker, the school-age person, professionals, and mid-level executives who found themselves out of work and needed to grow their skills, as well as people with a disability, those who had been incarcerated, homeless people, and individuals who didn’t have an education or didn’t speak English,” he explained. “All of those things required a more significant amount of time than the one-stops were prepared to address. But we realized that we were part of the answer for every one of those populations.”
Since the state did not have money to serve these subgroups, CareerPoint began writing grant proposals, seeking help from corporations and forming alliances with a wide variety of venues, such as the Hampden County Sheriff’s Office.
Today, it operates via seven or eight funding streams and grants that are continually changing. “We have a youth center due to six or seven grants, but we had to carve out a funding strategy,” Gadaire noted.
Finding sources of revenue is a constant struggle because the number of organizations looking to them for help continues to rise. “We’ve tried to create a marketing budget, but it keeps dwindling away. If the choice is marketing or helping a homeless person, the answer is obvious,” he said.
Although the agency initially provided free in-house training for businesses, it began to charge for those services. “We conduct sessions for businesses to help them manage their workforce. We’re giving a series of workshops right now to teach mid- to upper-level managers leadership skills — how to resolve problems, make their workers more productive, and avoid turnover,” Gadaire explained, adding that his organization is also set to launch a videoconference-training program to teach businesses how to conduct remote, face-to-face interviews, which he says will save them time and money.
Since the way people find jobs has changed, CareerPoint has two computer labs where people can become versed in new software and learn how to apply for jobs online. It also stages classes in networking, résumé writing, and a host of other topics related to finding employment.
When the one-stop center opened, it had 36 staff members, but that number has been reduced to around 30. However, it has compensated by forming alliances with many agencies and organizations. It has nine people from different agencies stationed within its office, and makes use of interns.
CareerPoint has also benefitted from countless hours of volunteer help from the Americorps Volunteers in Service to America program. VISTA volunteers have worked with youths involved with gangs as well as seniors, and include one volunteer who is the center’s information-technology manager. “We’ve also tried to build bridges with Westover Job Corps and agencies that offer veterans’ services,” Gadaire explained.
The agency’s staff members are so dedicated that, when they were told recently that two positions had to be eliminated, they offered to save them by taking a 10% pay cut for six months. Gadaire was against the idea, but finally agreed that everyone (including himself) would do it, and much to his surprise, it worked.
“These people are extraordinary; they believe in the community and want to make a difference,” he said. “But they are always exhausted, and I forever worry about burnout.”
Many sit on local nonprofit boards where they build partnerships. “Our partnerships are absolutely critical,” he said. “We are not experts in everything, but hopefully, if we do it right, we can expand our capacity. The community is better-served by our willingness to partner on just about every issue.”

Radical Changes
When FutureWorks opened, it was the only one-stop center in the state operated by a private company. Although profits were capped, Picard said many grassroots organizations and labor groups were upset that a private firm was operating with funds from the state and federal government.
So, in January 2002, after a series of meetings with then Springfield Mayor Michael Albano and Bill Ward, director of the Regional Employment Board of Hampden County, the owner agreed to turn over FutureWorks, with the caveat that it become a nonprofit agency. “The decision meant a lot in terms of restructuring,” Picard said, noting that the corporate headquarters of the Employment Training Institute handled the agency’s finances and human-resource issues.
“It was like starting a new company,” she said. “But having our own board of directors turned out to be one of the best things that happened; we had a very business- oriented team, and the community began viewing us differently.”
The change in status also allowed FutureWorks to pursue grants and funding unavailable to it as a private company. “We also began partnering with staff from other agencies,” Picard said.
One of its most profitable ventures was a shared contract that allowed the agency to work with welfare recipients in Hampden County. “We put more welfare recipients to work than in any other part of the state,” she said.
But despite such gains, the customer base continues to mushroom. “When we started, we saw between 3,000 and 5,000 people a year; last year, we served more than 16,000 individuals,” she noted, adding that FutureWorks consistently leads the state and serves more minorities, youths, and individuals with disabilities than any of the other career centers. “But in order to do so, we have had to look outward to other opportunities.”
These include a unique partnership with the Department of Revenue. The joint effort allows FutureWorks to work with non-custodial parents to help them get jobs so they can pay child support.
The program began as a pilot and expanded to include the family court system. In time, FutureWorks received a performance-based contract to extend the initiative. “It’s been a great program, and we have been told there is only one other place in the nation doing this. It’s in Tennessee, but we are unsure if we will be able to continue it,” Picard said, adding that they have not heard if their latest grant proposal will be extended.
Since Springfield is four times the size of Holyoke in terms of population, FutureWorks receives more funding than CareerPoint. But agency partners are equally critical to its ability to serve people and their on-site representatives. Those partners include Westover Job Corps, the Mass. Rehabilitation Commission, the Department of Education, the Resource Partnership, Hampden County Jail, the Mass. Commission for the Blind, the Commonwealth Corp., and state agencies such as the Department of Social Services and the Division of Employment and Training.
As the labor market has undergone change, FutureWorks has focused on health care and precision manufacturing, since those industries continue to experience growth.
The agency takes advantage of every opportunity, and was the second one-stop in the state to receive a national emergency grant related to a weather disaster. Picard said the Regional Employment Board received $3 million after the tornado on June 1, 2011 that allowed FutureWorks to hire people to do humanitarian work as well as clean-up, which in some instances led to full-time employment.
“We hired four staff people to administer the grant money; two focused on Springfield, and the other two focused on Monson and Brimfield,” Picard explained, adding that the agency has also deepened its link with Springfield Technical Community College.
“There is work taking place on both sides of the fence,” she said, adding that the agency has an STCC staff member on site.

Changing Tide
Gadaire said the one-stop career centers are opportunistic.
“Sometimes a program starts because we can easily fill a need, and sometimes the need has been there, and we finally find a way to fill it. But we don’t ever give up trying,” he said.
Picard agreed. “The one-stops have achieved a 50% rate of employment for the people they serve,” she said. “We’re here to give people hope.”

The Bing Arts Center Raises Its Profile — and Needed Funds