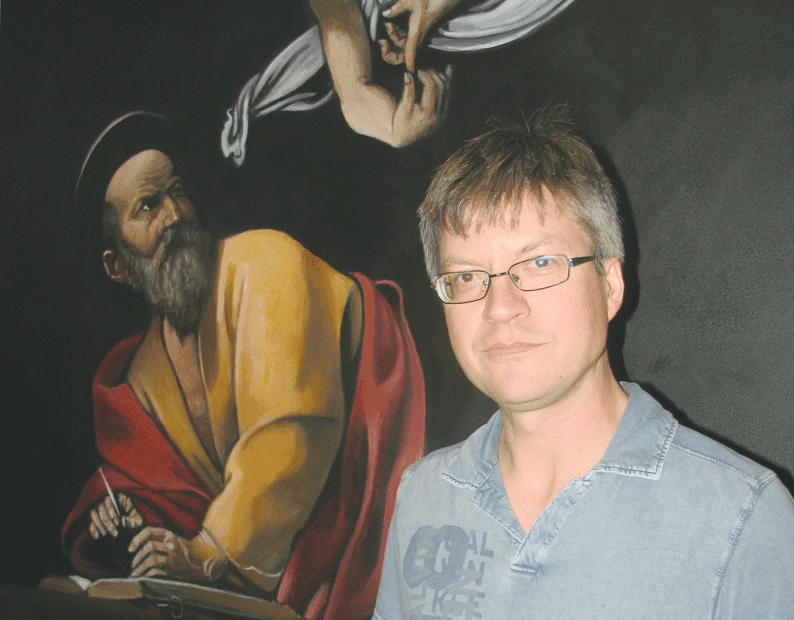 Downtown Initiative May Prove to Be a Unique Stroke of Genius 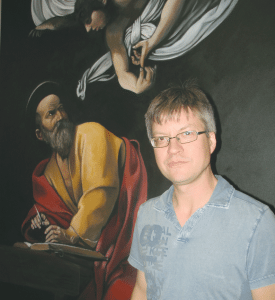 John Simpson in the transformed space on the ninth floor at One Financial Plaza.

Evan Plotkin says the ninth floor of One Financial Plaza had been “dark” — that’s a commercial real-estate industry term synonymous with vacant — for more than six years.

“With a few exceptions, no one had been in there, except for maintenance people, in a long, long time,” Plotkin, co-owner of the building and president of Springfield-based NAI Plotkin, told BusinessWest, adding that things have changed dramatically over the past month or so, and in a way that bodes well for Springfield and its downtown.

Indeed, roughly one-third of the ninth floor is now the exact opposite of dark, and while this space hasn’t exactly become a tourist attraction — not yet, anyway — a large and diverse group of people have hit that button in the elevator over the past several weeks. Many city officials have made the trek, as have many UMass trustees and administrators, including new president Robert Caret and recently named Amherst campus Chancellor Kumble Subbaswamy. The city’s police chief, William Fitchet, has been up for a look, as have a number of Plotkin’s friends and lovers of art.

They’ve come to see a unique collection of paintings, sculptures, and other works of art assembled by John Simpson, manager of the Hampden Gallery at UMass Amherst and an art professor in the Commonwealth Honors College at the university. Many of these same works had been occupying space — meaning that, in many cases, they were leaning up against walls, often back-to-back — in a gallery/theater in the old Hampden Dining Commons in the Southwest residential area at the university.

When Simpson was essentially evicted from that space by the building inspector several months ago, he launched a frantic search for alternative accommodations in which he could display art and create more of it. Before he really got started, Plotkin, who has been at the forefront of efforts to use art to stimulate economic development in Springfield, offered him a good chunk of the ninth floor free of charge.

It was, as they say, a deal he couldn’t refuse, and what the two men have created is intriguing on myriad levels.

Starting at the elevator doors, art abounds, ranging from self-portraits of the Commonwealth College students who created many of the works on display to various pieces that were part of a display on Egypt that Simpson helped create for the Springfield Museums nearly a decade ago.

But as they look out on all this art, both Plotkin and Simpson see something else — opportunities that come in many forms. These include the ability to demonstrate the potential for art to bring attention, energy, and vibrancy to a city or downtown, as well as a chance to show the leaders at UMass how an expanded presence in Springfield, something city leaders have desired for some time, could benefit both the school and the community.

“I like to say that we’ve planted a seed,” Plotkin told BusinessWest. “We’re watering it, we’re going to nurture it, and hopefully at some point in time this will grow into something bigger.” 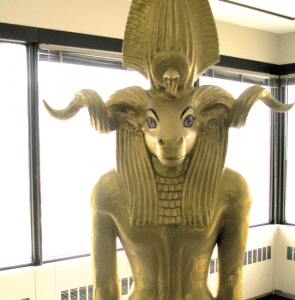 The ninth floor is crowded with an eclectic mix of art, including this piece from an exhibit on Egypt at the Springfield Museums.

He envisions UMass eventually taking over all or most of the ninth floor and bringing a program or programs to the downtown, perhaps in the form of a satellite campus.

“We’re hoping that someday, UMass will plant its flag here,” he said, “and that some component of the university is located here. We have serendipitously gone in this direction, and now we have something wonderful that we can build on.”

For this issue, BusinessWest talked with Plotkin and Simpson about what they’ve done in One Financial Plaza, and also about how they expect that seed that’s been planted to germinate and yield something special.

Printed over one of the entranceways to the ninth floor from the bank of elevators is a famous quote from author John Updike: “What art offers is space — a certain breathing room for the spirit.”

In this case, though, it was the need to create physical space for the art in question — not to mention breathing room for Simpson — that provided the first compelling chapter of a story that could unfold in any number of ways.

For now, it’s a tale of new life for formerly dark square footage, or an opportunity, as Plotkin put it, to “activate” more space in Springfield’s downtown. He’s been using that term often in recent years, always in reference to taking facilities that were dark — in either a literal or figurative way — and putting them back into use, or better use.

Examples include everything from the revamped plaza area at 1550 Main St. (the former federal building) to the park-like spaces within the Morgan Square apartment complex further down Main Street, to the lobby of One Financial Plaza, which has become an art gallery of sorts in recent years. Meanwhile, many buildings and open spaces downtown have been further activated by the placement of many works created by local artist James Kitchen. His welded-metal creations, such as the massive ‘Saturn’ now gracing the small park created on the former Steiger’s lot, adorn many public and private spaces as part of another initiative spearheaded by Plotkin.

How the ninth floor at One Financial Plaza came to join that list is a saga that began when Simpson was turned out of his space at UMass. 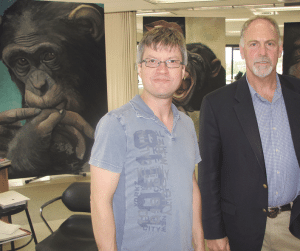 Evan Plotkin, right, with John Simpson, equates his activation of the ninth-floor space to “planting a seed.”

Backing up nearly a decade, Simpson said he’s been involved with several projects, such as the display on ancient Egypt for the Springfield Museums, as well as creation of the Art Discovery Center in the George Walter Smith Art Museum at the Quadrangle, and a Buddhist temple that was displayed at the Smithsonian as well as the Springfield Museums. His search for space to store and display these pieces and others brought him to the Hampden Theater, which the university allowed him to use for more than eight years. But this arrangement conflicted with the university’s plans to put Hampden back into use as a dining commons, he continued, so he was forced to vacate the premesis.

The university has been cooperative in trying to find alternative arrangements, Simpson went on, but in the meantime, Plotkin offered something more immediate and potential-laden, in a building that has made great strides in recent years in terms of reducing a high vacancy rate, but still has several vacant floors.

“Pushing us out of Hampden created this opportunity to display all these years of work by the students, making it a living thing,” Simpson explained. “So people can make things and at the same time look at these previous accomplishments, and learn how to do their own.”

In less than two months, Simpson and some of his students have transformed a large portion of the ninth floor from a dark, cold (figuratively) place with peeling wallpaper in many places into an oasis of art worthy of that Updike quote.

There is ample gallery and reception space, with walls crowded with paintings and other art forms, most of them created by Commonwealth Honors College students who are not art majors, but have created art that somehow expresses their chosen field of study. There is also a large studio — formerly the cafeteria for the most recent tenant, UniCare — that boasts the large amount of natural light that artists require.

The donation of the ninth floor for the foreseeable future solves Simpson’s immediate need for space, said Plotkin, but it also provided a significant opportunity for more of that “activation” work that he described.

“We’ve been successful in using art as a vehicle to transform space, and now it’s happened again here,” he said, gesturing with his hand to the art all around him. “This floor was vacant and dark for more than six years; now, it’s alive with energy.”

Simpson and Plotkin said the eclectic collection usually draws a one-word response from those seeing it for the first time — ‘wow.’

“Their jaws just drop,” said Plotkin, who has taken many friends and business associates through the space, which was also visited by many of those attending a pre-concert gallery opening and reception in the lobby of One Financial Plaza. The works hanging there, created by Commonwealth Honors College students, were inspired by Gustav Holt’s The Planets, which was performed that night by the Springfield Symphony Orchestra.

But while the present picture is drawing positive reviews, it is the prospects for the future that Plotkin, Simpson, and others find most intriguing. And speculation comes on many levels.

For starters, those involved with this project see the ninth-floor space as a possible site for events and fund-raising initiatives, and they speculate that it could someday be open for public visitation. They also see the strong possibility of collaborative initiatives with area schools, with the gallery and studio space providing unique learning opportunities for young people. Meanwhile, they also see it as a potential catalyst for more artists to seek to work and perhaps live downtown.

“This is where the business world and the art world intersects, and in a way that allows that revitalization thing to happen,” Plotkin said of what he believes is taking place at One Financial Plaza. “People can see this through all the things we’re doing in this building — it’s an example of what can happen.

“It’s like a test tube,” he continued. “We’ve created this environment, and people are looking at it as a microcosm of what can take place on a larger scale.”

And, on an even bigger scale, they see this collaboration as a possible springboard for creating a larger UMass Amherst presence downtown, one that might include a satellite campus, but also perhaps housing for students, which Plotkin described as a potential catalyst for further growth and new business development in the central business district.

Meanwhile, he believes that what has been created at One Financial Plaza can serve as an effective recruitment tool for UMass, as potential students see art created by others and hear how it has helped them gain confidence and resolve.

“The narrative here is that these very bright kids, many of whom didn’t know they had any artistic ability, discovered themselves,” he explained. “It’s incredible, it’s profound, and it’s enormous in its scope when you look at the quality of this work.”

As he looked around the ninth floor, Plotkin shook his head a few times while attempting to sum up all the possibilities.

“There is so much that can happen here — and also happen elsewhere because of this,” he explained. “As this matures, we’re hoping UMass can find the funds to have this fulfill all of its vast potential.”

Whether this will happen, and when, remain to be seen, but for now, what’s important is that the seed has been planted.