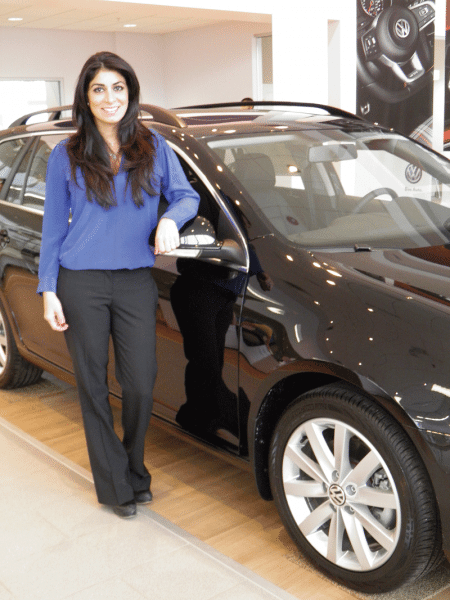 Carla Cosenzi says people who visit an auto dealership are often surprised at the advanced technology available in today’s models.

Carla Cosenzi doesn’t mince words when she talks about 2015 and her expectation that it will be a great year for auto sales.

“The economy continues to gain strength, interest rates remain low, and there are a lot of exciting new models coming out, so the outlook is really positive; the auto industry is predicting a record year,” said the president of TommyCar Auto Group, adding that sales have been on the rise in the past few years and the company was confident enough to build brand-new Hyundai and Volkswagen dealerships in Northampton over the past few years.

Jeb Balise agrees that sales are moving in a forward direction. “The industry is predicting a phenomenal year, but we had our best year ever last year,” said the chairman and CEO of Balise Auto Sales. “We sold just under 25,000 units, so any growth will be a bonus. But we are pretty excited about the future and continue to add new stores.”

Mike Marcotte said Marcotte Ford saw a 9% increase in new-car sales last year. “Sales were really strong, and we are hoping to be at 10% this year. We’ve hired new employees and ramped up our commercial sales department,” the company president told BusinessWest.

Such optimistic projections are in line with national forecasts. In fact, on Jan. 21, analysts at the American Financial Service Assoc. Vehicle Finance Conference in San Francisco said they expect the numbers to continue to grow in 2015 for the sixth consecutive year.

TrueCar and J.D. Powers are also optimistic and predict that sales of new vehicles should hit 17 million this year for the first time since 2005, a 3% increase over last year.

A number of factors are playing into the equation. Consumer confidence has risen, many vehicles can be purchased at low or 0% interest, gas prices have dropped dramatically, and consumers are impressed by the new features, gas mileage, and technology offered by manufacturers today, who find themselves in a highly competitive market with lean margins.

The reduction in gas prices has fueled the growth of SUVs and trucks, which slowed considerably nationwide when prices at the pump increased a few years ago.

Local dealers also noticed the trend. “People are very reactive to current circumstances, and we are already seeing sales of trucks and SUVs increasing because of low fuel prices; when gas prices went up, customers gravitated to hybrids,” Balise said. “But now, sales of mid- and full-sized SUVs and trucks are growing at a particularly fast rate.”

He believes the trend is exacerbated by the fact that construction jobs are increasing in the area, and with projects accelerating in Springfield, contractors and people in related businesses are buying the trucks they need to run their businesses. “There is a real demand for pickups again,” Balise said.

Marcotte concurred, and said the timing is serendipitous for Ford, due to its new, full-sized F-150 pickup, which has an all-aluminum body; redesigned Explorer and Edge SUVs; and a wide range of other new vehicles.

“We saw people trading in their big trucks for smaller cars three years ago,” he told BusinessWest, “But due to better gas mileage and the price of gas, there has been an upswing in sales of trucks and SUV’s.”

Marcotte Ford bulked up its inventory of 2014 F-150s last year to take advantage of the increase in demand, with the game plan of being able to offer attractive prices when the 2015 model came out. “There are great incentives for the 2014 models,” Marcotte said.

But the biggest factor in any sale is affordability, which has been a common denominator that is motivating people to purchase new vehicles.

“Transportation is less expensive today than it has been just about anytime in the past,” said Balise. “Low interest payments have exacerbated the advantages of new vehicles, and we are often able to offer people a lower payment than they had for their last vehicle.”

Industry analysts say that, although people are borrowing more than they did in the past for a new vehicle, the fact that they are spreading payments over longer terms at low or 0% interest rates makes payments especially alluring. Experian Automotive reports the average new-car buyer financed approximately $27,799 in the third quarter of 2014, and although that was an increase of about 4% over the year before, their average monthly payment was only about 2.6% more.

“When people get a loan at 0% interest, it allows them to get more features and keep their payments the same,” Marcotte said.

Auto dealers say that, although some people still trade in their vehicles every two to three years, most are keeping them for longer periods of time. “The average is 11 years, and the trade-ins we see have about 100,000 miles or more,” Marcotte said.

However, dealers say the fear of taking on new debt that existed during the recession has led to pent-up demand. “It’s greater today than it has ever been,” Balise said, adding that many people who put off purchasing new cars for several years are eager to buy again.

And since many haven’t entered a dealership for some time, they are wowed by what is being offered.

“Ford makes major changes every three years,” said Marcotte. “And people who visit a dealership for the first time in years are surprised by the technology and safety features in the vehicles.”

He told BusinessWest that Ford introduced two models that can be run on gas or electricity — the Fusion and the C-Max hybrid — to the market about three years ago. “People can plug into charging stations at dealerships and travel about 1,000 miles before they have to recharge. There are more options than ever before, so vehicles can really be tailored to suit people’s needs.”

Cosenzi agreed and noted that Volkswagen’s E-Gulf was named Motor Trend Car of the Year, and that vehicle, along with Nissan’s Leaf, another electric model, not only qualify for large state and federal rebates, but also ensure that buyers will never have to purchase gas again.

“We have a quick-charging station that fully charges a vehicle in under an hour, and more places are adding fast-charging stations so people can stop along the way when they want to take a long trip,” she continued, adding that customers who visit TommyCar’s dealerships often look for the latest safety features, including the BlueLink by Hyundai and Car Care by Volkswagen, which are similar to the OnStar system, which provides an emergency-response system, navigation, and diagnostics.

“BlueLink allows people to set a mileage parameter that alerts them if the driver goes outside of it or the speed limit, as well as step-by-step navigation. It also alerts them whenever the vehicle needs maintenance,” Cosenzi told BusinessWest. “But these features aren’t driving traffic, and people are not buying because they want the latest technology. They are just impressed by it when they come in.”

Balise agreed. “People are smart shoppers and more frugal than they used to be when it comes to options,” he explained. “They only want them if they see their value and know they will use them. They are more pragmatic and less emotional about purchases than they were in the past.”

Dealers are in agreement that most buyers know what they want when they enter the dealership because they have done research online. But they want to touch and feel the vehicle as well as test drive it, Cosenzi said.

However, due to fierce competition, they also know there is flexibility in pricing, and Balise said what used to be a painful transaction is now something that can be pleasant for the buyer.

“We’ve streamlined the process and discount vehicles in a forthright way with full disclosure so the customer is in control,” he said. “When they arrive, they are well-educated due to the Internet, so it behooves dealers to live up to the knowledge and understanding they have. Our success is based on high volume, so we are able to make transactions at low prices.”

Repeat business is important and is measured by manufacturers, and because the service people receive while they own a vehicle weighs heavily in their choice of where to go when they are ready to purchase a new model, dealerships are doing everything possible to make visits easy and pleasant.

“Manufacturers and dealers go to extremes to provide a great experience,” Balise said, adding that his dealerships’ customer-retention and loyalty rates are very high.

Marcotte explained that the trend of keeping vehicles longer than in the past led his dealership to outgrow its existing number of service bays. “So we are building new bays for commercial vehicles,” he said, adding that he will break ground next month on a new building with 16 bays. It will be positioned next to Quicklane on 933 Main St. in Holyoke, which services any make or model and was built by Marcotte six years ago.

He added that the dealership’s service department is open until midnight, and people who buy from Marcotte Ford can take advantage of its 150 free loaner vehicles. “We want to make things as convenient for customers as possible,” he noted. “We also offer breakfast catered by the Log Cabin Restaurant on Tuesdays and Saturdays so people can have a nice meal; some customers schedule visits at these times just because of the free meal.”

Balise said offering exceptional service is no longer an option, but a necessity. “Being good is not good enough today. Our growth is based on being customer-focused and is driven by that more than anything else. Standards have continued to rise over the last 10 years, and we are maniacal about being the absolute best in class.”

Overall, Cosenzi said, consumers are more confident than they were a few years ago.

“Sales in the second half of 2014 really accelerated for us, and we are coming into our good months. Sales typically start to increase in February, and the outlook is really positive,” she noted, mentioning President’s Day specials and tax season because buyers who get large refunds often use them as a down payment for a new vehicle. “Plus, there are a lot of new models coming out.”

Balise concurs and said the company completed construction on four new dealerships last year and now has 19 in Massachusetts, Connecticut, and Rhode Island. “We are predicting a 2% to 4% increase in sales this year and feel pretty confident we will sell more than 30,000 units,” he told BusinessWest.

If interest rates and gas prices stay low, and the economy continues to improve, the numbers should add up to a good outcome for consumers and dealers alike. 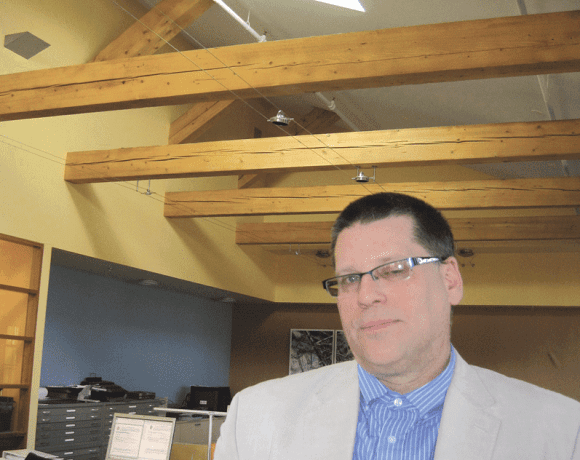