PeoplesBank Honored for Efforts in Sustainability 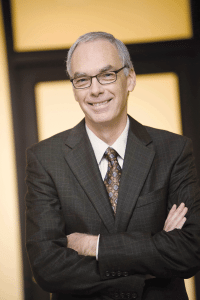 Doug Bowen says environmental-sustainability efforts are part of PeoplesBank’s commitment to the community.

When PeoplesBank built its third environmentally friendly branch office earlier this year, it strove to give customers and employees a new look and feel, as well as make a strong statement about the company’s values.
The bank looked to high-tech giant Apple for inspiration in developing its open and relaxed interior design. The property features free electric-vehicle charging stations in the parking lot; energy-efficient lighting, plumbing, heating, and cooling systems; and more outdoor green space, as well as a water-runoff system to conserve water and hydrate plants.
All of this innovation came at a cost. Constructing a sustainable building like the new branch office at 300 King St. in Northampton costs between 10% and 15% more than it would to build a conventional structure without all those environmentally friendly features.
Doug Bowen, PeoplesBank president and CEO, admits that the bank may not see a return on the added investment through energy savings for “seven to eight years from now” at the earliest, but that timetable certainly isn‘t deterring him from such endeavors.
Indeed, what interests him most is that PeoplesBank continues to be an industry leader in developing sustainable branch offices, fostering an environmentally friendly corporate culture, and investing in projects that will be energy-efficient. This is a mission that PeoplesBank staked out a couple of years after Bowen took over the leadership of the bank in 2006, and it continues to find new ways to manifest itself.
“It’s a continuation of our commitment to the community,” he explained. “We don’t have shareholders, so our one goal is to make this a great place to live, work, and raise a family. We’re taking a leadership position in sustainability. It’s the right thing to do. That’s what guides us.”
On Oct. 21, PeoplesBank was recognized by the American Bankers Assoc. for its efforts in sustainability by being given the organization’s Community Commitment Award and its first-ever Sustainable Banking Award. The ACA honored PeoplesBank for building three Leadership in Energy & Environmental Design (LEED) registered branch offices, and for financing more than $60 million in green-energy projects such as wind, hydroelectric, and solar power.
Bowen and PeoplesBank Senior Vice President Sheila King-Goodwin were on hand at the ACA’s annual convention in New Orleans to accept the award. More than 7,000 banks around the country were eligible for the honor.
“It was validating, primarily,” Bowen said of winning the award. “We know that we’re taking a position on environmental sustainability that’s unique to banks, but we’re still thrilled to be recognized nationally.”
King-Goodwin added that she was “humbled and honored that a local, mutually owned community bank” received the ABA award.
“The recognition amongst our peers was astonishing,”she said. “Sustainability fits with our core values. Many banks are divesting branches. We’re growing, so we wanted to do it in an environmentally responsible way.” 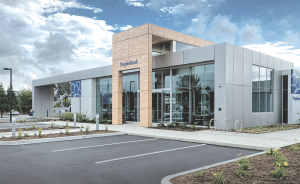 PeoplesBank has built three LEED-certified branch buildings as part of its green efforts.

Bowen, who started working at Holyoke-based PeoplesBank 38 years ago as a teller, came up with the idea to put an emphasis on sustainability about five years ago. An environmental committee formed within the company, and eventually it was decided that, as part of its strategic plan, the bank would build energy-efficient branches as it expanded its reach across the Pioneer Valley.
“It’s a crowded marketplace,” Bowen said. “You’re trying to differentiate yourself and provide value for your customers. This is one way to stand out.”
Bank officials were starting from scratch and sought advice and counsel from the Green Roundtable, a Boston-based nonprofit that offers education, policy, and technical assistance to companies and organizations looking to construct sustainable buildings.
“The Green Roundtable helped us when we built our first sustainable branch in Springfield,” said King-Goodwin. “We worked with them for about a year. Some aspects we were already putting into our buildings, such as energy-efficient heating and cooling systems. They helped us with things like reducing paved surfaces, how to better filtrate water, and how to dispose of and recycle building materials.”
The bank’s first sustainable office opened at 1051 St. James Ave. in Springfield in 2010. The office is LEED Silver-certified and was the first green building constructed in the city, which earned PeoplesBank Springfield’s GreenSeal. The following year, the bank opened a Gold-certified LEED office at 547 Memorial Ave. in West Springfield, also the first of its kind in the community.
Several environmentally friendly features were incorporated into the construction of the Northampton branch office, which was designed by EDM, an architectural firm based in Pittsfield.
The 3,425-square-foot branch was engineered by New England Engineering Corp. of Southborough and built by Marois Construction of South Hadley, and was constructed on a former Exxon gas station site using 12% recycled materials. More than 12% of construction materials were from the region, cutting down on transportation and other costs. Roughly 95% of demolition materials from the construction site were recycled.
On a recent Monday morning, light poured through the high glass ceilings into the bank’s interior. The building uses natural light for a good portion of the day, cutting down on energy costs. The main lobby has a large-screen high-definition television, a kiosk equipped with two iPads, a coffee bar, and comfortable chairs and couches.
Bowen said the bank’s customers have made the Northampton branch an immediate success.
“After being open four weeks, we were almost at $5 million in deposits,” he said. “Our goal is to have $5 million in deposits in the first year. We feel we’ve really been welcomed by the community and that we provide a valuable service.”
Environmentally friendly policies are now ingrained in the culture at PeoplesBank, said Bowen. The nine-member environmental committee plans and coordinates events such as an annual environmental fair. The committee also started working with Community Involved in Sustaining Agriculture (CISA) in 2012, and as a result stages a farmers’ market that sells local food and products at its Holyoke headquarters.
The environmental committee is also devising a plan for the bank to give each employee $1,000 toward the purchase of a hybrid vehicle.
Janice Mazzallo, senior vice president for Human Resources and head of the committee, believes this commitment on behalf of the environment makes PeoplesBank an attractive place to work.
“As we’ve brought in new employees, I’ve found that they want to work for an organization that cares about the environment,” she said. “We attract like-minded people, and it makes it easy to recruit new employees.”
Banking methods are also changing at PeoplesBank, and Bowen said the bank is implementing a plan to eventually become completely paper-free.
“We’ve reduced our use of paper dramatically,” he said. “All of our board meetings are done with iPads.”
According to Bowen, customers are also attracted to the bank’s commitment to the environment. He believes being located in Western Mass., where many residents share a concern for the environment, is a plus.
“We’ve received a lot of positive feedback from customers,” he said. “Clearly there’s an appreciation of our efforts in this area.”
Over the years, PeoplesBank has helped fund environmentally friendly projects to the tune of $60 million. In 2009, the bank provided $2.5 million to Holyoke Gas & Electric to replace hydroelectric generators. In all, the institution has provided HG&E with $8.5 million in funding for hydroelectric projects.
John Majercak, director of the Center for EcoTechnology, has been working with PeoplesBank on environmental initiatives since 2009. The bank provided $25,000 to help convert the organization’s EcoBuilding Bargains into a high-efficiency building.
The store for recycled building materials and other products, located at 83 Warwick St. in Springfield, is 100 years old and needed a major overhaul. Majercak said the money helped with the installation of exterior insulated panels, an energy-efficient heating system, a new insulated roof, and solar panels.
“We’re using a lot less energy in a building that size,” he said. “We’ve seen an 88% reduction of electric and gas use in the building. It’s really energy-efficient.”
The Center for EcoTechnology and PeoplesBank have collaborated on a number of projects, including the organization’s Go Green program. PeoplesBank has been funding the program, which encourages households to help the environment through recycling, reducing waste, composting, saving energy, and using renewable energy, since it began in 2011.

Bottom Line
“If you look around the country and the world, you see larger companies doing a lot around sustainability,” Majercak told BusinessWest. “It’s much less common among smaller companies. PeoplesBank’s commitment to the environment is at a scale that puts them in a league of their own compared to other medium-sized companies.”
The bank has been in that league for some time now, and the recent honor from the American Bankers Assoc. provides more evidence that, while being ‘green’ isn’t an inexpensive proposition, as Bowen noted, it can bring a number of rewards.

The Race to the Patent Office 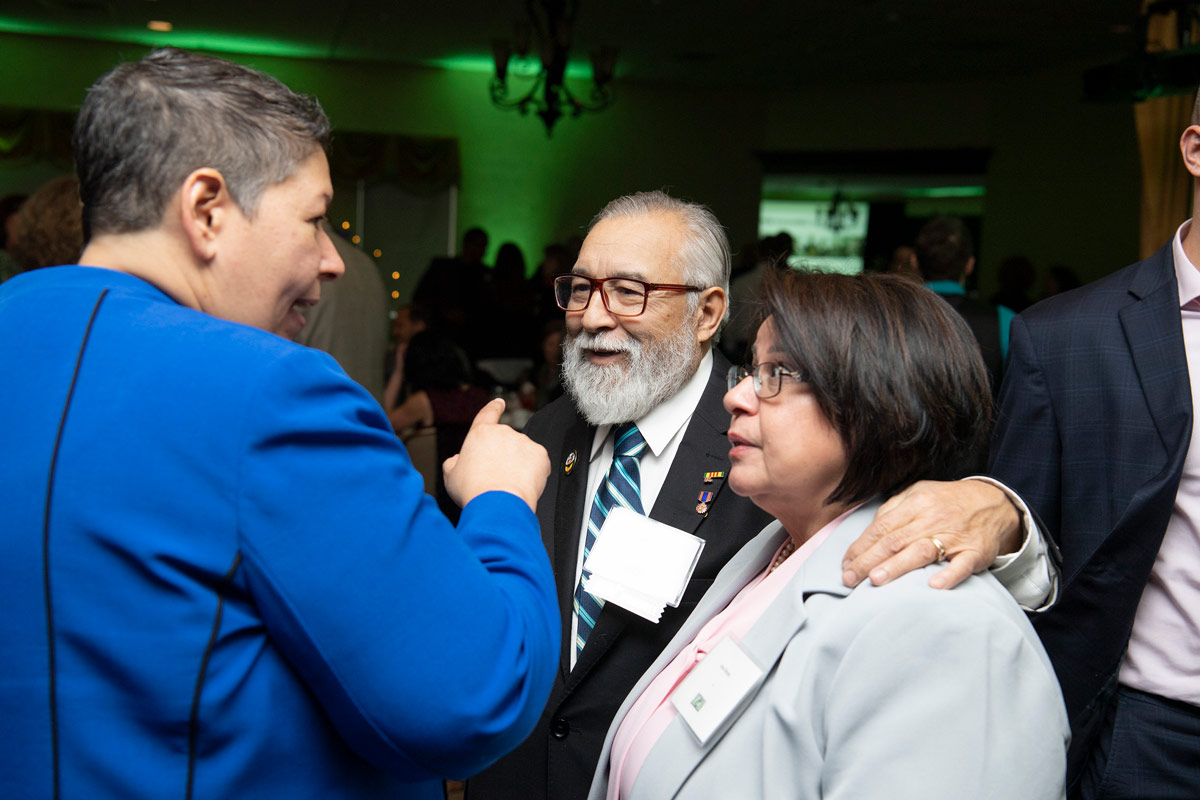