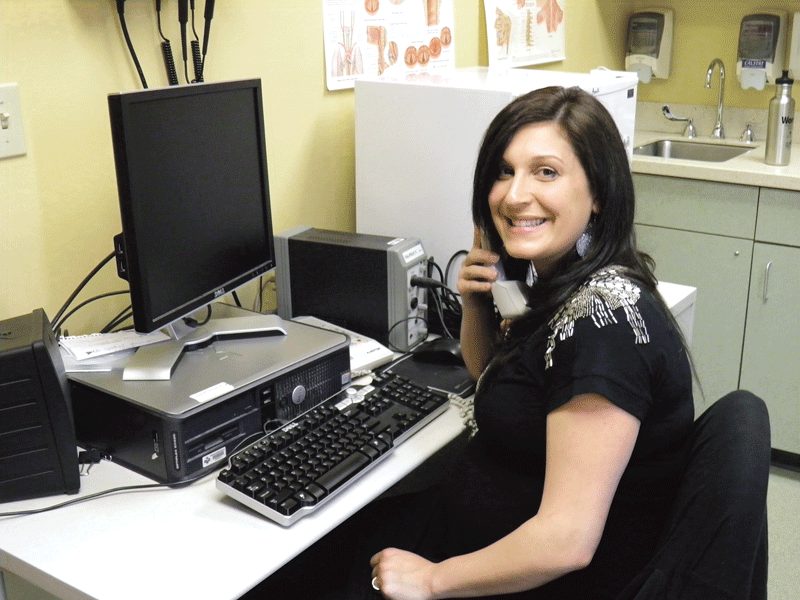 In Manner of Speaking

Misconceptions Persist on Stuttering, Its Causes, and Treatment 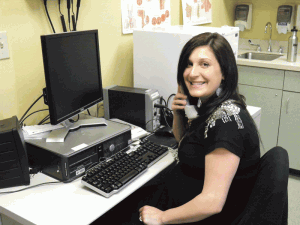 Nadia Dorval says using the phone is so difficult for people who stutter that they usually avoid it.

The Oscar-winning movie The King’s Speech is a true story that portrays how King George VI of Britain resolved his stuttering problem with the help of a speech therapist.
But, although the monarch experienced success, there is no cure for stuttering, and more than 3 million Americans and 68 million people worldwide live with the problem every day. Winston Churchill, Marilyn Monroe, and Carly Simon are a few of the well-known figures who number among their ranks.
“Many famous people were stutterers. It has nothing to do with intelligence. But people who stutter often have a sense of inadequacy and feel frustrated, angry, and depressed,” said Nadia Dorval, an adult speech language pathologist with Baystate Rehabilitation Care in Springfield.
“For some people, stuttering is developmental and can change, and for others it is chronic,” said Karen Spinelli, a speech-language pathologist at Noble Hospital in Westfield. “People usually start to notice it when children are preschoolers or about the time when they begin developing language.”
According to the Stuttering Foundation, the condition affects four times more males than females, and approximately 5% of all children go through a period of stuttering that lasts six months or more. Three-quarters recover by late childhood, and about 1% have long-term problems.
Dorval says stuttering in adults doesn’t always begin in childhood and can be caused by an injury to the brain. “It is not something that’s black and white; stuttering is very complicated,” she said. “People have the misconception that stutterers can control their problem, but even when they do, it can occur again in high-stress situations.”
For this issue, the BusinessWest looks at the causes of stuttering, what adults can do to help children who stutter, and why unrealistic expectations and a fast-paced lifestyle can make the situation worse. 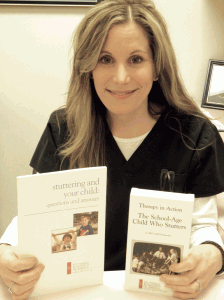 Karen Spinelli says materials from the Stuttering Foundation can help people become informed about the problem.

It is not uncommon for preschoolers to stutter for a period of time. “They know what they want to say, but their ability to coordinate the physical aspects of speech doesn’t always keep up with it,” Spinelli said.
She explained that three things are necessary for speech: breathing, voicing, and articulation. Voicing refers to the way the muscles of the vocal cords close and vibrate, while articulation is the way the lips and tongue move to produce sound. “Researchers tell us there is no one definitive cause in developmental disfluency,” Spinelli explained.
However, research is beginning to show that there may be a genetic component, and Spinelli says the latest findings reveal a difference in the way the brain controls the three main areas of speech in people who stutter.
Environment also plays a role. “It doesn’t cause stuttering, but can make it better or worse. The more anxious a stutterer becomes, the more it can exacerbate; stress and anxiety can cause a snowball effect,” she continued, adding that staying relaxed while speaking is critical for stutterers.
If a child begins stuttering, all of the adults in his or her life should behave in the same manner, said Spinelli, who advises them to talk slowly in a calm manner, to avoid looking worried or rushing the child, and to pause before they respond to what the child says.
“Don’t jump to answer the child quickly, and maintain eye contact so they don’t feel you are losing interest,” she continued, adding that adults should never try to help a child by finishing their sentences. “It is important for a child to feel they have your attention. If you speak for them, it can send the message that they are inadequate and create more anxiety. It is important for the child to know that what he or she is saying is more important than how it comes out, even though it can be difficult to take the extra time to listen.”
The reason speaking slowly makes a difference is because people tend to match the rate of the speech of those around them. “It is a very unconscious behavior,” Spinelli said.
Another helpful technique is singing or reciting nursery rhymes out loud with the child. “People who stutter don’t usually exhibit the behavior when they are singing or talking in unison, so it’s a good idea for parents to do these things with their child,” she told BusinessWest.
However, if frustration arises, parents should ask their pediatrician to refer them to a speech-language pathologist. There are early-intervention programs for children younger than age 3, and after that, the school department can help. “Most people don’t realize that, even if a child is not in school yet, he or she can still receive services through the school system,” Spinelli said.
Claudia Eitnier, a speech language pathologist at Mercy Medical Center, said one of the reasons it is prudent to seek an evaluation is because the stuttering may be part of a broader speech-and-language problem. “Don’t become impatient when someone stutters, and don’t treat a child or adult who is stuttering as if something is wrong with them,” she said. “It is not something the person is doing intentionally.”

Myths Abound
There are a number of myths related to stuttering. These include the thought that people who stutter are less intelligent, that the condition is caused by nervousness, that it can be ‘caught’ by imitation or hearing another person stutter, that it is caused by stress, and that it helps to tell a person to “take a deep breath before talking,” or “think about what you want to say first.”
None of these things are true. People who stutter can become nervous due to other people’s reactions, and stress can make it more difficult for them to speak fluently. But these things do not cause the problem.
The purpose of therapy is to provide people who stutter with useful strategies and help them learn ‘easy stuttering.’ This refers to teaching a person to speak with less tension in their throat and mouth.
“It makes the stuttering less pronounced,” Spinelli said. “The more emotionally anxious a person becomes, the more tense their muscles become, and the worse the stutter becomes.”
Stuttering does tend to decrease as children grow, she added, but can occur again at any point in their lives.  In fact, the goal of stuttering therapy isn’t always to make it go away.
Eitnier says technology can be useful in treating some cases of stuttering. One device used by therapists is called Speech Easy. It resembles a hearing aid, and provides delayed auditory feedback, allowing the person to hear their speech at a different pitch with a slight time delay.
“This causes the person to change their pattern of speech, and usually results in the reduction or elimination of stuttering,” she explained. “Hearing their own words played back changes the mental processes that coordinate speech.”
Biofeedback programs can also be helpful. One program works by having a person speak into a microphone while wearing a headset and listening to music or background noise. The person can see the pattern of their speech on a computer screen, and the background noise, which blocks the sound of their voice, can make speech easier for some people.
“But there isn’t one right way to treat stuttering,” said Eitnier. “Since no two stutterers are alike, what works for one may not work for another, because its roots, causes, and severity vary. And even though there is no cure, pill, or surgery for it, people can learn to manage their stuttering.
“But it is very hard work no matter what age you are,” she continued. “Adults are taught relaxation techniques; the more relaxed and comfortable they are, the more fluent they become.”
Dorval sees many adults who stutter, and says some re-learn strategies taught during their childhood. One is to stop speaking and take a deep breath from their diaphragm when they begin to stutter.  “The whole idea is to remain relaxed,” she said. “Stuttering typically happens when they are in an emotional or stressful environment. If they become angry or excited, emotions can take over their speech.”
Speaking on the phone is also difficult, because stutterers fear judgment and often don’t know who will answer when they make a call. “Most stutterers will tell you they hate the phone. They will text people or use e-mail and have other people make their doctor’s appointments for them,” Dorval said.
One technique she uses to overcome this is to have an adult call stores and ask if an item is available. They prepare a list of questions before they call, and then read them off from a checklist. Dorval advises them to take their time, speak slowly, and if they begin stuttering, to stop, take a deep breath and then begin speaking again.
“A lot of stutterers talk very fast; some repeat entire works, some repeat phrases, and some repeat the initial consonant sound. And some also use interjections such as ‘ah’ or ‘um’ between words and have hard or soft blocks,” Dorval said, adding that a block refers to the length of time that passes between words or sounds.
“A soft block may come across as inappropriate pausing while a hard block makes the words sound tense,” she explained.
Recording the person’s voice while they are speaking, then playing it back to them can also be useful. “If they hear what they doing, they can see where they could have slowed down and started again,” Dorval said.
Some stutterers develop secondary behaviors such as rubbing their leg or wincing when they speak, she continued. These actions take place because at some point, the behavior worked and as a result it became an involuntary response.
“I worked with someone who rocked and bit his hand while he spoke, and had someone else who would wring her hands,” she told BusinessWest. “The behaviors create more tension, and part of the person’s therapy is to make them aware of what they are doing, because these actions make their stuttering more obvious.”
Dorval wants adults to know that if they are talking to someone who stutters, they should not finish their sentences or interrupt the individual. “People want to help, but they need to be patient. And if you work in a public place and get a stutterer on the phone, be extra patient. It takes a lot for them to make a call,” she said.
Adults who stutter often report they have difficulty with job interviews and relationships. “They feel like they are not capable of interacting the same way as someone who speaks fluently,” Dorval said. “But if someone really wants to improve, and is ready to make a commitment, the chances of a successful outcome are increased.” 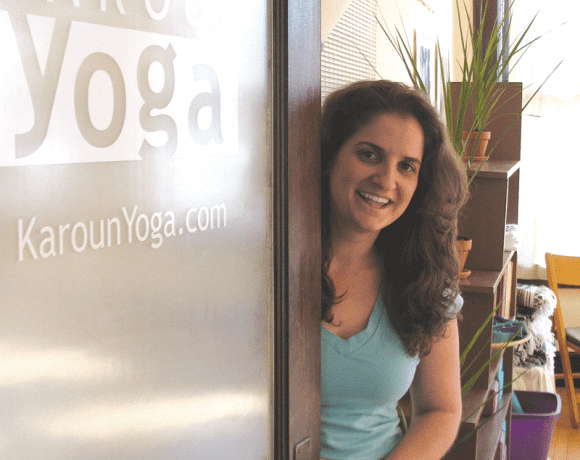 Courses Look to Take Full Advantage of an Early Start