Springfield College’s basic role hasn’t changed since the institution was established in 1885.
“Our mission has always been to educate young people in mind, body, and spirit for leadership in service to others,” said Stephen Roulier, the school’s executive director of Marketing and Communications, adding that this includes engaging in community service while enrolled at the school.
Indeed, the percentage of students who volunteer time and energy to a wide variety of local and national nonprofit organizations is a hallmark of the college that sets it apart from its competitors.
“Market research that was done by the branding and marketing agency Ologie a year ago showed that this is the tie that binds us,” Roulier told BusinessWest. The research, conducted in conjunction with the college, included roundtables, online surveys, and phone interviews with faculty, staff members, students, graduates, prospective students and their parents, and local business partners.
That research helped officials at the school conclude that this ‘tie’ is not effectively communicated in the college’s marketing and branding efforts, a shortcoming that might have historically hindered efforts to attract students with similar mindsets.
The school’s official seal has doubled as a logo and been used on everything from stationary to paychecks to promotional materials. But components on it, such as the lamp of knowledge, are used by other schools.
In addition, many people view Springfield College primarily as a place to get a sports-related education, due to its renowned reputation in that area, which means that many students interested in fields such as business or psychology may not consider it.
The combination of these factors led Roulier, who previously helped Western New England College rebrand itself as it became a university, to approach President Mary-Beth Cooper with the idea of creating an official logo and consistent branding message.
“I told her we needed to put out the right message so we could become more recognizable and broaden our recruitment reach,” he recalled. She was in agreement, and the work that has been done to develop new branding included the recent study by Ologie.
Since that time, a new logo has been created — a simple inverted triangle, without the words and outer circle that are part of the seal. “We retained the image as it speaks to balance in mind, spirit, and body,” Roulier said.
For this issue and its focus on education, BusinessWest takes an in-depth look at this rebranding effort and what it might mean for this venerable institution.

Altruism in Action
The college’s new branding will focus in part on the volunteer work done by students, who learn to live balanced lives long before they graduate.
“We want each department to showcase their strengths, but also align them with our greater mission,” Roulier said. “We’re all about teamwork, which is very important to the Springfield College student or graduate.”
He told BusinessWest that a large number of students participate in the college’s Humanics in Action Day, held each year during the fall semester. Classes are cancelled, and students sign up to volunteer at a wide variety of nonprofits. “It’s not mandatory, but close to 100% participate,” Roulier said, “and it’s a great experience for everyone because they work alongside staff members and coaches.”
Last year, noted Shannon Langone, program director for Americorps, students and staff worked on more than 100 projects during the day, which included reading to schoolchildren, removing graffiti from buildings, and cleaning the yards of more than 60 elderly residents as well as a number of vacant lots.
“What’s great about this is that the students are working with the community and its diverse population, and by utilizing their skills, they are much more prepared to go out in the world, get a job, and contribute to their neighborhood,” Langone said. 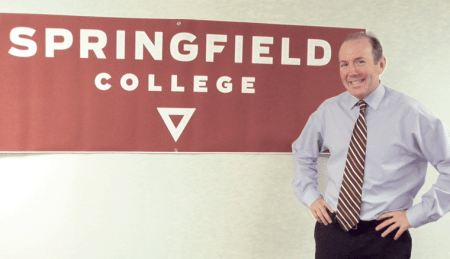 Last year, 49% of freshmen in undeclared majors chose to register for “First Year Seminar,” a one-credit, half-semester course in which they learn about the importance of community service while they decide what their focus of study will be. During the class, they visit a nonprofit with their professor, gain knowledge about it, and then engage in a service project.
Spring break is another time when students are given the opportunity to work with charitable groups such as Habitat for Humanity or the college’s Americorps program. “Some return year after year,” Roulier said. In addition, many academic departments incorporate experiential learning into the curriculum beginning in freshman year.
Langone said Springfield College boasts more than 3,000 students who perform some type of community service every year, which accounts for more than 97,000 hours of unpaid time. Another 400,000 hours are donated through unpaid internships and field hours.
As strong as this track record is, and as much as it is synonymous with the school, it is not accurately reflected in the college’s look and marketing efforts.
“There is a misconception about Springfield College. Some people believe if you are not interested in sports, you would not fit in here socially or academically. We are well-known for our physical education programs, but our struggle has been to let prospective students and parents know that we offer a wide variety of majors,” Roulier said, adding that, in addition to its main campus, the school has nine satellite campuses across the country. In the past, they offered only majors in human services, but beginning July 1, the program offerings will be expanded.
Meanwhile, he noted that past marketing efforts have used mixed messaging to promote the college.
“Some recruiters have touted Springfield as the birthplace of basketball or used that as a tagline,” Roulier said, citing an example. “But the study showed that students and staff members who come here really care about humanity, which identifies more about who we are than the majors we offer. I was really amazed when I took this job to find that students really live the mission; they not only know it, but live and breathe it.”
Roulier believes the school’s new look will convey that message and is hopeful that it will resonate in the same way that other corporate images do.
“Some people claim they smell french fries when they see the Golden Arches,” he explained, “and the Apple symbol is associated with high-quality technology.”

Brand New
Roulier expects it will take a year to create a consistent, unified branding message, which includes redesigning the college website to reflect it.
“But it will help admissions counselors recruit new students. In the past, they used different methods to promote the college, but now, everyone will be on the same page, although different departments will take different approaches,” he told BusinessWest.
Overall, the process of rebranding the school appropriately has been an eye-opening process. “We needed to discover what really makes our institution unique,” he noted.
The school’s leaders have done exactly that, and their hope is to become known, as Roulier said, as “a college community that cares deeply about its humanics philosophy: the importance of mind, body, and spirit and service to others.” 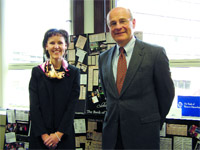 Is Your Business Ready To ‘Excel’?