Designs of the Times 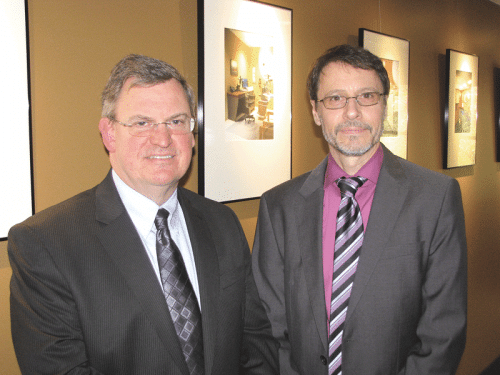 Rick Katsanos and Don Hafner have parlayed strong relationships with regional institutions and municipalities into a diverse roster of projects.

When Rick Katsanos and Don Hafner met as freshmen at Penn State in the early ’80s, they couldn’t have foreseen someday co-owning an architecture firm two states away.
As it turned out, however, they were among a knot of architecture students who gravitated north after graduation to find work. Katsanos, a Wilbraham native, was hired in 1986 by Ed Jendry, who had launched Architects Inc. in Northampton in 1976. Two years later, Hafner, who had been working in Vermont, joined him at the firm.
Five years later, they launched a successful partnership at the helm of that company, now known as HAI Architecture.
“In 1993, Ed wanted to slow down, so Don and I bought the business from him. He still works for us, half days — which means he works 12 hours a day instead of 24,” Katsanos said with a laugh. “But the transition was fantastic.”
A few years before that, Jendry had spun off a sister company, Healthcare Architects Inc., to pursue work in the regional healthcare market — a decision that proved lucrative; the company has designed dozens of modern, high-tech spaces for hospitals, health systems, and physician practices across Southern New England.
“Ed basically found that was a good market,” Katsanos said. “Doing work for healthcare institutions provided a very solid workload. People knew we were capable in that area — they didn’t have to look far for somebody with that expertise.”
Hafner said he and Katsanos have enjoyed the challenges of that niche. “We’ve always been involved in those projects, which tend to be equipment-intensive. Rick and I are fairly engineering-minded, and we value the idea of being able to coordinate those disciplines.
“Some of the projects have been really fascinating,” he continued. “When we worked on our first linear accelerator, the gravel had to come from a single quarry in Canada. We found out a lot of unique stuff about medical technology. That was a really cool aspect of our jobs.”
Several years ago, however, the partners felt that the effort of maintaining two corporations outweighted the benefits, so they merged them into one company, called HAI Architecture. Architects Inc. disbanded, Katsanos explained, and Healthcare Architects — which survives for now, due to some outstanding federal contracts — will eventually go away as well.
The problem, he explained, was that the firm had become too well-known in the healthcare world. “People were asking, do you do other stuff? What had been an opportunity was now a problem.”
For this issue’s focus on architecture, Katsanos and Hafner sat down with BusinessWest to talk about their firm’s wide array of work, and how the architecture field continues to evolve in ways that present both new challenges and greater opportunities.

Regional Focus
The name change reflected the company’s broad palette of work, from civic and commercial projects to residential design and historic preservation. Because the company is so well-entrenched in the healthcare realm, Katsanos said, it continues to thrive there based on its reputation.
“We are always doing medical offices, up and down the Valley,” he told BusinessWest, adding that it’s heartening when large health systems tap local talent for their projects instead of larger, Boston-based firms. “We appreciate when Western Mass. businesses use Western Mass. companies. Our people live here and spend money here, and that helps keep the economy local and vibrant.”
But HAI has delved more heavily into the commercial market, he added, citing the new Florence Saving Bank branch in Hadley and the Palmer headquarters of Northern Construction as significant recent projects.
“We did restoration for First Churches of Northampton here,” Hafner added, with other area jobs ranging from the Dakin Humane Society animal shelter in Leverett to renovations to Forbes Library in Northampton; from the new Deerfield fire station to an adaptive reuse project in Florence that turned an 1860s sewing-machine factory into a medical office complex.
HAI has also been increasing its workload at area colleges, particularly Springfield Technical Community College. “Higher education has become a new sector for us,” Katsanos said, “which is natural, since we live in the Five College area.”
‘Green’ building has long been a buzzword in architecture and construction, but Katsanos said sustainable design — with an emphasis on ecological impact and energy efficiency — has become so ingrained in the region that it will eventually be taken for granted.
“The Massachusetts energy code became more stringent, and baseline building standards have become better,” he said. “But Don and I always talked to clients when about sustainable building. Our position is that good design should automatically be sustainable and green. We looked at the building codes and said, maybe we could go a little further, with the materials we put in building. That’s our approach — there should be no such thing as an unsustainable building.” 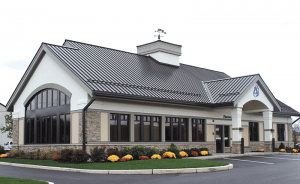 Hafner agreed. “Codes have driven the industry this way. We’re seeing this whole cachet of ‘green’ being incorporated into all of architecture. And that’s what our philosophy has been about all the time.”
Katsanos said clients are willing to pay for such amenities. For example, “Florence Bank was very pleased, and we’re happy when the clients are happy. It looks wonderful; they made some smart decisions and didn’t just try to go for the cheapest solution. Being a financial institution, they know what money is worth, and they spent it wisely. That was a good group of people to work with.”
Hafner agreed, and said he and Katsanos have tried to build relationships — and repeat business — with clients they like working with. “We want to establish these relationships, so that people trust us and know we can meet their expectations.”
Those expectations, Katsanos said, are becoming more challenging to meet.
“We’re doing projects on tighter time frame,” he said, partly due to technological advances such as building information modeling, or BIM, by which architects and clients manage and share designs and project information in three dimensions and real time. Having come up in the industry in the era of two-dimensional drawings, they’re nostalgic about the craft of architecture, but have embraced the future — and the shorter schedules clients demand as a result.
“People are so accustomed to seeing the end product right away, they don’t always understand the process,” Hafner said, adding that, in the past, “we were taking a three-dimensional object and reducing it to two dimensions, then handing it to someone else to create in three dimensions. That’s an odd process. With building information modeling, we’re doing away with that, and allowing everyone to think three-dimensionally. That should be the wave of the future.”

Back to Basics
At the same time, Hafner said, HAI is strongly rooted in the traditions of garnering business through relationships and reputation, which is why the firm has not done a great deal of advertising in the past. “Our clients have always been happy with the work we’ve done, so they’ve called us back. For a long period of time, we didn’t have to worry about marketing.”
“We’ve run under the radar a lot,” Katsanos added.
However, Hafner went on, “we have started to elevate our marketing efforts. With the recent downturn we’ve seen in the economy, a lot of larger firms from Boston have started doing what we call downfeeding. Where we controlled a segment in the range of $200,000 to a couple million dollars, a lot of the larger firms in the state are coming over this way and moving down into that segment.”
What’s not changing is the collaborative way the HAI team works on projects, he added.
“We let everyone take part in everything, from design through construction administration,” Hafner said. “When we’re working on something, we start in the beginning at the table, and everyone gets a say in what things might look like. It doesn’t always translate to the project, but it lets everyone work together, and they develop a healthy respect for each other.”
Katsanos agreed. “We work with a good team,” he told BusinessWest, “and we work very collaboratively in this office. It’s not a trickle-down design process.
“A lot of us have been here a long time, but we always try to bring in someone new — either a summer intern or a staff person — because, what they lack in experience, they more than make up for in a fresh perspective,” he went on. “They don’t know not to ask dumb questions, and questions sometimes show that you’re on the wrong path. If you do the same thing over and over again, you can become complacent. It’s good to have someone asking, ‘why do that?’ It makes you constantly analyze what you’re doing.”
Which is — appropriately, for this firm — a healthy way of doing business.

VVM Accelerator Awards Boost Startups in More Ways Than One