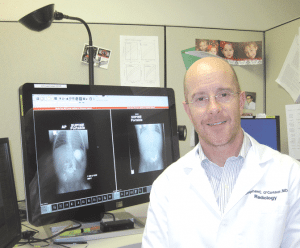 Dr. Stephen O’Connor says there must be a “healthy balance between diagnosis with imaging and more traditional means of diagnosis — and it has to be driven by evidence-based medicine.”

When many women think about medical imaging, they think of the mammogram.
And that is rarely a pleasant experience, due in part to the painful squeezing of the breast tissue for an accurate scan, but also to the stress and anxiety of waiting for the outcome — a clear scan and clean bill of health, or an abnormal finding.
Abnormal can mean several things — cancer, a benign mass that requires more investigation, or a false-positive finding that may lead to unnecessary biopsy. Unfortunately, none come without a nerve-wracking delay.
However, advances in diagnostic imaging have dramatically changed how doctors and radiologists perform their jobs, and in the process, the experience for the patients being diagnosed and monitored for treatment has become faster, far more precise (which also means fewer false-positive scares), and, according to area imaging specialists, a bit less stressful.
“Until recently, the best mammogram was a digital mammogram, which was an improvement over the original film mammogram,” or X-ray, said Dr. Louis Pacilio, lead radiologist for mammography at Cooley Dickinson Hospital.
That was before the advent of the newest technology in mammography: breast tomosynthesis, or 3-D mammography, a benefit of last summer’s affiliation agreement between Cooley Dickinson Health Care and Massachusetts General Hospital and Partners HealthCare System.
The two-dimensional digital exam that Pacilio referred to has been performed at Cooley Dickinson since 2008, but there are limitations to 2-D mammograms that show the full thickness of the breast tissue projected as a flat image, which may result in cancers not being identified and the possibility of normal tissue appearing abnormal, leading to unnecessary and stressful recalls of patients for extra views, he said.
Approved by the FDA in 2011 and pioneered at Mass General, a 3-D mammogram enables the radiologist to examine the breast one layer at a time, a technique that allows overlapping structures from different layers in the breast to be separated and the tissues to be seen more clearly.
“We recognize that a mammogram is an innately stressful study for women, but I think it does lessen the stress for some, knowing that this is an advanced form of imaging,” noted Pacilio.
Advanced imaging has become a major tool in the identification and treatment of many diseases, and mammograms are just one method. Radiologists look for diseases in the human body mainly via three imaging technologies — X-rays (radiographs), CT (computed tomography), and MRI (magnetic resonance imaging), said Dr. Stephen O’Connor, medical director of Quality in the Pediatric Radiology Department at Baystate Medical Center. Other methods include ultrasound (high-frequency sound waves) and nuclear medicine (planar or 2-D scans), which includes PET (positron emission tomography) scans.
“Based on clinical imaging, when we make a diagnosis of, say, appendicitis, we’re much more accurate than we used to be,” said O’Connor. “So there are fewer operations to see if someone has appendicitis, because our positivity rate is close to 95%.”
For this issue’s focus on the future of healthcare, BusinessWest spoke with several professionals who work with some of the most advanced forms of imaging technology about how their tools have become increasingly precise, and what that means for patients. 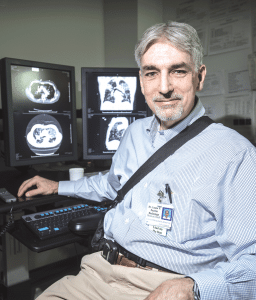 Louis Pacilio looks to a future where diagnostic testing involves no stressful false positives, but only detection of diseases that may grow and become life-threatening.

A day in O’Connor’s life is quite different now than 20 years ago.
“There were things I did as a radiology resident 10 times a day that we don’t do 10 times a year now,” O’Connor said, referring specifically to the IVP, or intravenous pyelogram, an X-ray test that uses a contrast material injected into a vein in a patient’s arm, which helps identify diseases of the urinary tract, such as kidney stones, tumors, or infection. “The advancements in technology over time have been improved speed, image quality, and — specifically with regard to CT scans since 2001 — a very aggressive campaign in the imaging field to drive the dose of radiation down while adding to image quality.”
But to understand how imaging has altered the diagnosis and treatment of disease, one must understand imaging modalities:
• According to radiologyinfo.org, a division of the Radiological Society of North America, the revolutionary progression of imaging began with Wilhelm Conrad Röntgen, a German physicist credited with producing and detecting electromagnetic radiation in a wavelength range in 1895, an innovation known today as X-rays. The painless process involves exposing a part of the body to a small dose of ionizing radiation to produce pictures of human or animal interiors.
It is the reduced use of radiation, while maintaining and even improving image quality, that O’Connor called one of the most active areas of advancement in imaging technology. Pacilio added that the new combination of 2-D and 3-D mammography involves a slightly higher radiation dose, but current research suggests the demonstrable benefits outweigh the small potential risks.
• Ultrasound is a painless and safe use of high-frequency sound waves, the same principle used in sonar technology in ships.  When a sound wave strikes an object, it echoes back — in real time — to reveal changes in appearance, size, or contour of organs, tissues, a fetus in utero, blood flowing through blood vessels, or abnormal masses.
Doppler ultrasound, noted O’Connor, is a special technique that can measure the direction and speed of blood cells as they move through vessels, and has replaced older, more invasive X-ray methods.
• MRI is a non-invasive method that uses a powerful magnetic field, radio frequency pulses, and computer software to produce detailed pictures of organs, soft tissues, and bone.
• CT scan, also called a CAT scan, generates a 2-D image of a section through a 3-dimensional object. CT images provide greater detail than traditional X-rays, helping doctors interpret and diagnose problems such as cancers, cardiovascular disease, musculoskeletal disorders, and more.
• PET scan is a type of nuclear medicine that uses small amounts of radioactive material (called a radiotracer) injected into the bloodstream, swallowed, or inhaled as a gas while the patient lies in a large machine with a doughnut shaped-hole in the middle (similar to a CT or MRI unit). Multiple rings of detectors scan and record the emission of energy from the radiotracer, producing a computer-aided image used to diagnose and determine the severity of many types of cancers, heart disease, neurological disorders, and other abnormalities. Some of the most promising research from PET technology, said O’Connor, involves myriad cancers and Alzheimer’s disease, the most common cause of dementia.

Value Proposition
O’Connor told BusinessWest that the speed and accuracy of imaging has markedly improved in recent years, especially in emergency medicine. But, because of the cost, he said, “there’s got to be a healthy balance between diagnosis with imaging and more traditional means of diagnosis — and it has to be driven by evidence-based medicine.”
According to the Journal of the American Medical Assoc., evidence-based medicine integrates the best available evidence with clinical experience, allowing clinicians to recommend, and their patients to make, informed choices consistent with their values.
“Just because it’s a fancy new tool and it’s more expensive, should we be using it?” O’Connor asked. “The question is, are we adding value with the newer technology? Clearly, over time, CT scan has earned its spot.”
On the other hand, O’Connor is currently working in partnership with pediatric surgeons to develop an MRI (magnetic resonance imaging) urology program, replacing IVP, but the cost effectiveness has not yet proven to be acceptable for the Baystate practice.
Imaging technology has seen its share of advancements, he continued, and part of what drives the adoption of new breakthroughs is the habits of other physicians.
The newer, more advanced machines that physicians have found worthy boast two highly sought-after factors: less radiation use and more accurate results.
One advance is the colonization of the radiation beam itself, which offers a more finite, less fuzzy beam with less scattering of radiation to other areas of the body. Another is radiation dose-monitoring software called iterative tracking, which permits high-quality image reconstruction that eliminates the graininess typically caused by a lower radiation flow.
O’Conner compared that to a picture taken in a room with low light that offers poor image contrast. The newer imaging software is able to increase the contrast to improve image quality for a more precise detection of disease.
In the diagnosis of osteoporosis — a bone disorder resulting in diminished bone strength that predisposes a patient to increased risk fracture — Lori Stoudenmire, a certified bone-density technician at Women’s Health Associates in Westfield, deploys one of the most advanced forms of bone densitometry imaging in the region, using a GE Lunar scanner with a software program called FRAX.
The computer algorithm, which stands for ‘fracture risk assessment index,’ analyzes a patient’s important historical variables — genetics, lifestyle, trauma — alongside a full-body bone scan to calculate the 10-year probability of hip fracture or major osteoporotic fracture of the spine, forearm, hip, or shoulder. Dr. Robert Wool, physician and owner of Women’s Health Associates, bases patient treatment on that scan.
“We used to treat solely on bone density, but we know that fracture risk is not based solely on bone density; there are lots of other factors,” said Stoudenmire. Capturing those other variables is what has made the advancement of FRAX so significant for bone-density imaging. Screening every two years allows for bone-loss comparisons, she added, and further developments are on the way.
“The programs, which are meant for more elder patients, are changing now to open up to men who are showing early signs of osteoporosis, or cancer patients who are maybe in their 30s who are on chemo, because that will affect your bones,” she noted, adding that oncologists can now monitor cancer patients and properly medicate them for severe bone loss.
Stoudenmire feels that the imaging is very clear with the GE Lunar, but she would like to see more advancements in FRAX — specifically, questions that go beyond history and involve more lifestyle elements, giving doctors even more information about true bone health as they craft an appropriate diagnosis.

Image Is Everything
In just the past few years, Pacilio has been pleased to see increased accuracy in diagnosis, in not only 3-D mammography, but advanced ultrasound and breast MRI. Yet, he looks to a future where testing for breast cancer, or any other disease, involves no stressful false positives, and advanced imaging can help him detect only diseases that threaten to grow and potentially become life-threatening.
Those advanced imaging modalities, including a hybrid imaging technique called image fusion; PET/CT, which is transforming cancer care; and PET/MRI, a potential advancement in oncology, cardiology, and neurology, are in various stages of research. Just two months ago, the U.S. Food and Drug Administration approved a radiopharmaceutical for use with PET to image the brains of adults being evaluated for Alzheimer’s disease and dementia.
At this stage, many of the promising image-fusion modalities are exclusive to elite research facilities, but over time, they, too, will be adopted by regional health systems.
With every one of those advances, doctors will produce speedier, more precise, and often less stressful results — and patients will have a clearer picture of their path to good health.